I am pleased to say the section has had a busy period with a large number of useful observations sent-in. The majority dealt with the fading evening apparition of Venus; observations starting just after that planet’s greatest eastern elongation from the Sun in late March, and continuing until Venus was just a narrow crescent, 1% illuminated, in late May. There were also attempts to see or photograph the mysterious ‘Ashen Light’ on the dark side of Venus. Finally, observations of Jupiter, Saturn and Mars in the early morning foreshadow what will be better placed later in the year.

Starting with Venus; there were a number of images taken in ‘white-light’ using one-shot-colour (OSC) cameras which usefully show the steadily decreasing visible phase, however many observers also tried imaging in the near Infrared (IR) or ultraviolet (UV). UV observations often show faint dark markings that can be seen to move around the planet in its rapidly rotating atmosphere. IR markings can sometimes be discerned but they are usually extremely subtle and require excellent seeing conditions to capture. Steve Norrie, Martin Lewis, Dave Finnigan and Mark Beveridge all attempted IR imaging with Dave and Martin also capturing UV detail.

Early march contained some days of good ‘seeing’ conditions and the first contributions came from Steve Norrie on the 2nd of the Month. Martin and Dave then followed with contributions from the 4th and 6th with some lovely UV detail from Martin and a striking false colour image combining UV and IR detail taken on the 9th. Dave’s Images show some very faint IR detail, captured with his 12” SCT and an ASI120 monochrome camera.
On the 18th Mark Beveridge took an image mixing IR data as luminance, overlaid on OSC data and which captured cusp-caps and a bright limb. It is useful to compare these images with visual reports and drawings taken in the period. I was lucky enough to receive highly detailed reports and drawings from Robert Steele, Alan W Heath and David Graham. All these observers are meticulous reporters of detail and use a variety of instruments and coloured filters to see then record their observations. Of particular interest is one report form Alan which hints at a possible thin line extension of the North Cusp, well onto the dark phase of the planet. There is a suggestion that this event, recorded on the 8th of April around 1850 UT, may also have been seen by an observer in Italy and possibly been photographed by another in the UK. I will try to get hold of this picture if I can. 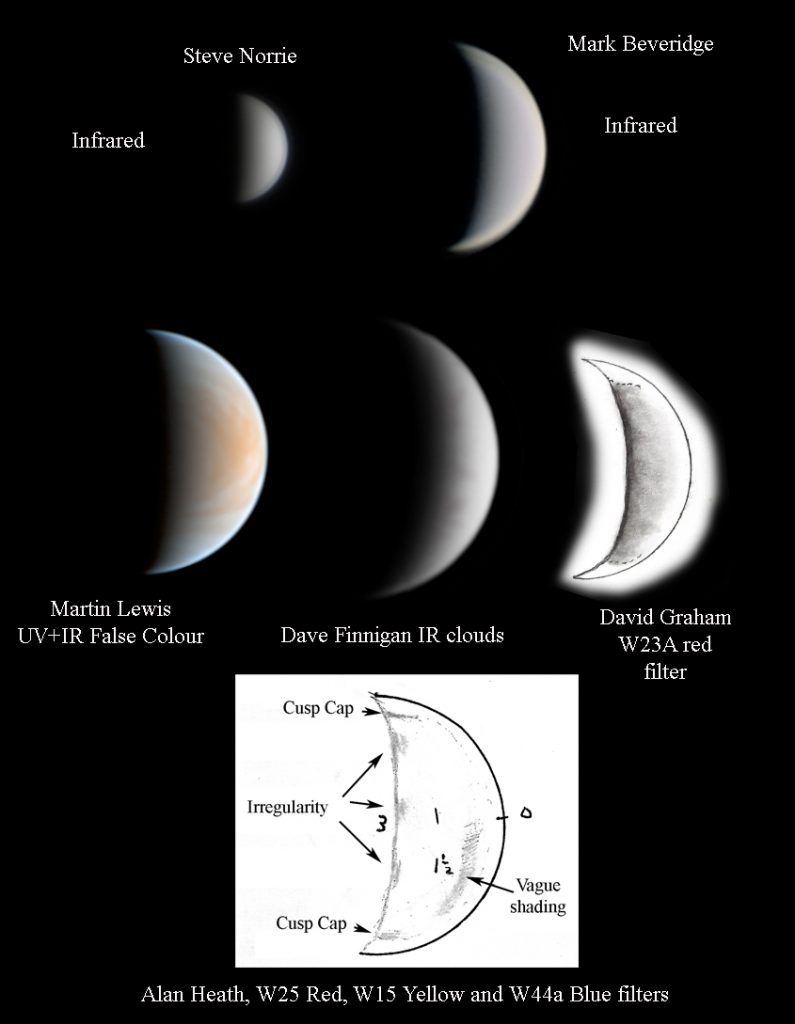 All of these visual observers have recorded cloud patterns on Venus but it must be emphasised that the markings are faint and subtle; drawings will show them as darker then they appear to the eye and this is done in order to highlight them, in the same way a photographic observer will play with the contrast of his images to emphasise the detail.

Robert and I had something of a correspondence over the ability, or lack of any, of the human eye to see any detail in the UV using specialist UV or deep-blue optical filters. For myself, a Venus UV planetary filter may as well be covered in black paint for all I can see through it, but my cameras readily record detail. It seems that the accepted range of the human eye runs from 380 Nm in the near UV up to 800 Nm in the near IR but that there is some marked variation between individuals and, at best, sensitivity at 380 Nm is only around 1/8th of that at 400 Nm.

Robert’s visual observations are often made with yellow or green filters (W15 and W58), sometimes separately and sometimes stacked together, while Graham often favours Orange W21or red W23A filters; Alan Heath uses a wide range of filters, carefully recording estimates of brightness through each. These observers are happy to report delicate cloud features within the normal visual range but emphasise this takes practice, patience and awareness of the many illusory effects of glare, poor seeing and high expectations! I do not claim to be anywhere close to them in ability but acknowledge that long and careful observation does, very occasionally, suggest faint visual markings to me.

I was fascinated by Robert’s attempts to see the ‘Ashen Light’ (AL) on the dark, unilluminated, phase of Venus. There have been many visual reports of this, more-or-less since a telescope was first turned on Venus, but photographic evidence is decidedly thin on the ground. The Ashen light is a faint glow in patches or covering areas of the dark side seen in contrast with the absolute blackness of space. Mark is fully aware of the possible optical/chromatic problems within his observing setup and is meticulous in trying to minimise or eliminate them. In searching for the Ashen light he uses a home-made occulting bar to block-out the brilliant light from the illuminated phase so he can carefully observe the dark phase. One contrast effect is the way the dark part of Venus often seems darker than the surrounding sky when the illuminated phase is in the field of view. Blocking out this blinding phase with the bar causes the darker contrast effect to vanish.

Optical scattering within the instrument and from the blade of the occulting bar can all give an impression of lights on the dark side that don’t truly exist. One must be very careful to eliminate these effects before claiming a sight of the Ashen light. An interesting discussion of the effect happened on the SPA observation forums around the 20th of April following a visual report of the Ashen Light from a forum member, but since I haven’t received all the observations mentioned I can’t form an opinion one way or the other. Robert recorded no sightings of AL that he couldn’t attribute to optical effects in his equipment, but remains open-minded; too many highly-regarded observers have reported seeing it to simply dismiss it.

One thing is for certain and that is IR views of the surface of Venus are a possibility for skilled amateurs. There is an optical window in the planets thick atmosphere close to 1000 Nm wavelength and this has been exploited by amateurs to make a ‘heat-map’ of the unilluminated phase of Venus; an infrared version of the Ashen light. Two Australian amateurs first made such observations in 2017 using IR sensitive industrial cameras and specialist 1000Nm filters. Martin Lewis has succeeded in doing the same thing from the UK and sent me his results from observations in April and May. He used a filter made by Edmund Optics which passes a 25 Nm wide IR window centred on 1000Nm and, as well as industrial cameras, he experimented with commercial planetary cameras. He found that otherwise excellent cameras such as the ASI 290MM and 178MM were too noisy or insensitive but that the ASI174MM camera was suitable.

To get his results he needed to take much longer than usual exposures with moderate gain levels and to collect many video frames. He employed the de-rotation capabilities of the software WinJupos to combine his images and to produce rotation videos and extract 2 dimensional maps of the unilluminated surface of Venus. I would emphasise Martin is particularly skilled at image processing and he used unusual techniques, such as capturing in 16-bit mode, to allow him to record and stretch to visibility the very faint variations in the thermal signature of Venus; his results are striking. 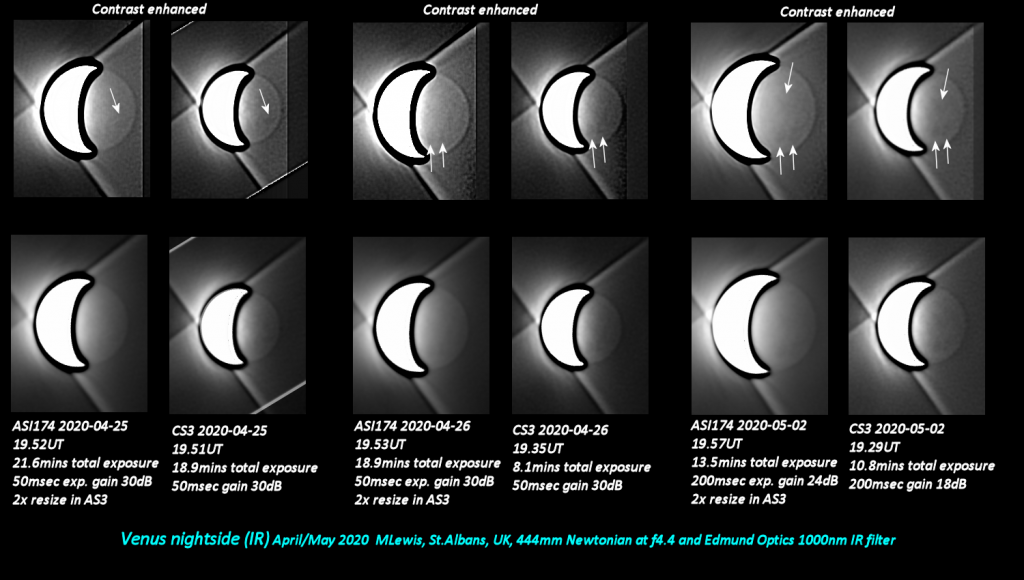 With space for this article rapidly running out I will conclude discussions of Venus by mentioning Paul Sutherland’s excellent images of it passing through the Pleiades cluster in early April and his successful experiments with eyepiece projection into a mounted smartphone camera. Observations were finished off by Mark Beveridge who sent in pictures of Venus from the 29th and 31st of May when the planet was just 1% illuminated and sitting around 8 degrees from the centre of the Sun! Mark also caught tiny Mercury in the only observation of that planet received in the period. 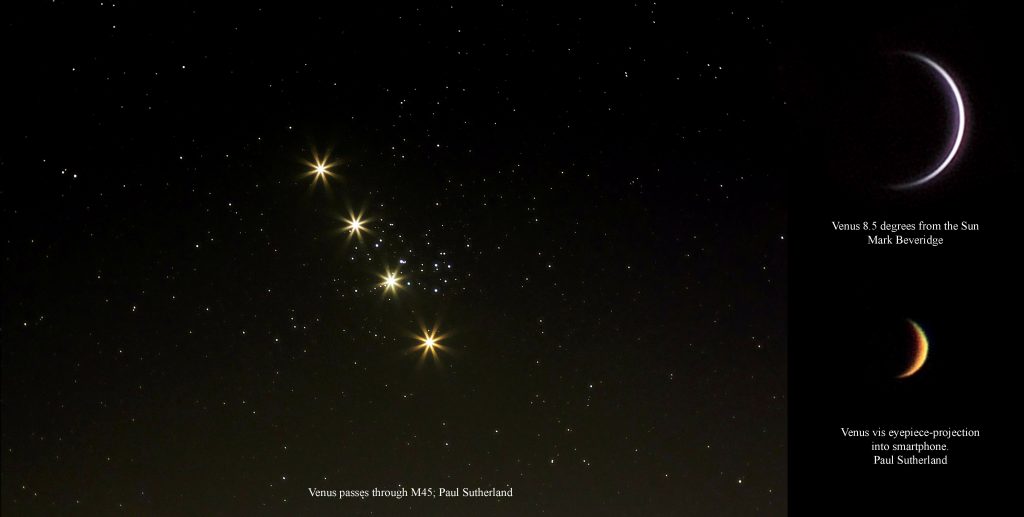 Which leaves me with Jupiter, Saturn and Mars to summarise in a very few words. Larry Todd sent in a stream of truly excellent images from his base in New Zealand with Mark Beveridge and I adding the occasional observation from the UK. Jupiter is seen to have a tawny coloured equatorial zone, a multi banded and thin SEB while the NEB is very active with large wave activity on its northern edge, possibly presaging an outbreak of the belt. The north and south tropical zones are relatively empty with Oval BA being now almost completely white rather than ‘The Little Red Spot’ as it was formally known; a number of small white ovals are visible on the edge of the South Polar Regions. Both my own and Mark’s images are perhaps most notable for being taken at very low altitude, around 11 degrees in both cases. We did not expect detailed results under these circumstances but use of an Atmospheric Dispersion Corrector and the combination of a number of video-runs in WinJupos software did produce usable results. 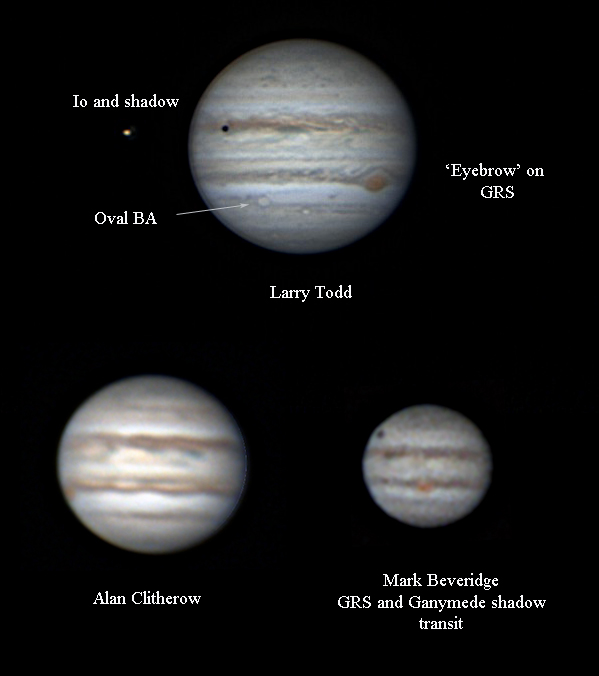 To finish, Larry Todd produced terrific images of both Saturn and Mars with seasonal detail visible on the red planet. Currently spring is moving into summer in the southern hemisphere, extensive cloud can be seen covering the shrinking southern ice cap and all frost and fog has disappeared from Hellas. Dark ground features are clearly visible in his images and things are looking good for an excellent Mars season later in the year. 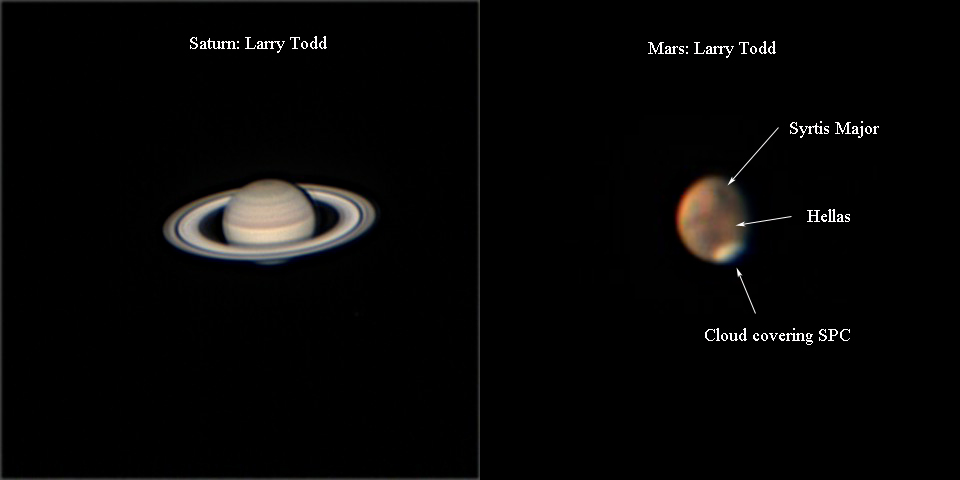 There were a few excellent observations for May that were received after the end of the month when the section report had already been sent off to the editor. I would like to add a couple of them here particularly mentioning the detailed visual observations of Venus by Robert Steele. He describes following Venus as it moved towards Inferior Conjunction with the Sun and was able to report on the planet up to the 24th of May when it presented just a 3.5% illuminated visual phase. This is close enough to the Sun to be optically dangerous and requires meticulous preparation and safety precautions to achieve without risk to sight.

When this close to the Sun the extremes of the thin illuminated phase can occasionally be seen to extend around the unilluminated phase to form an incomplete annulus around the planet. Robert’s efforts were made to try and achieve this but, as is so often the case in Britain, the weather eventually defeated him. This was, however, a tremendous effort.

Finally (unless I receive anything else!) I must add a drawing of Mercury made  at the end of May by David Graham.  David followed Mercury from the 20th of May until the 1st of June, but that observation belongs in the next section report! 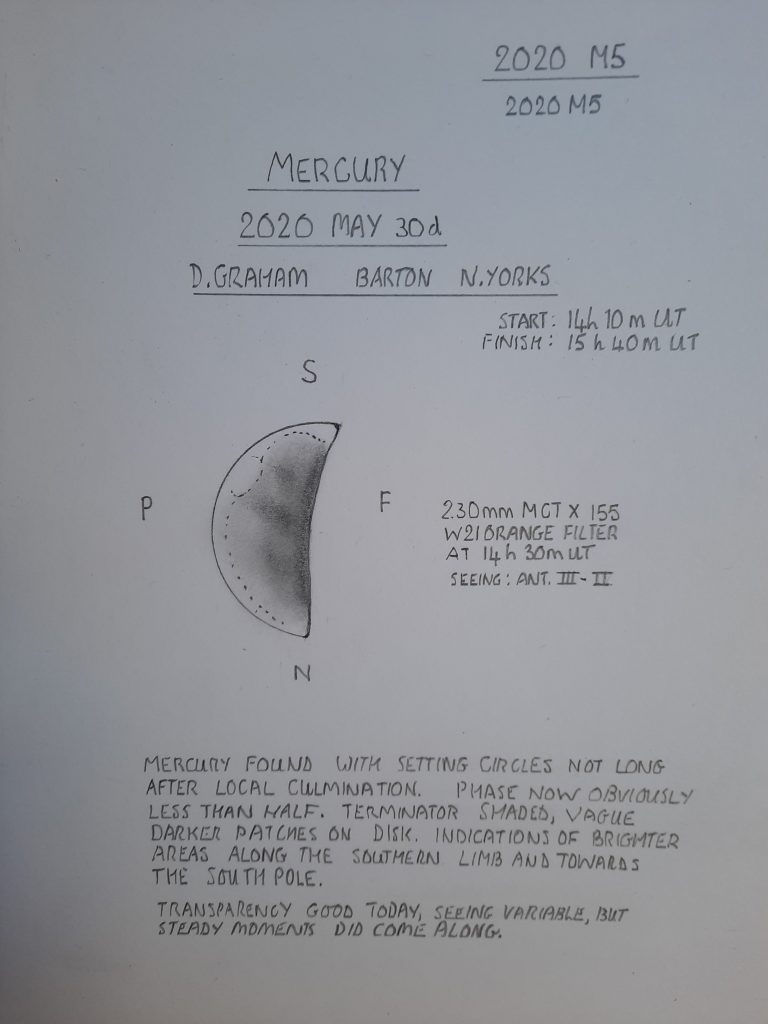