The main body of this report covers Venus, as section members followed its beautiful evening apparition up until its greatest eastern elongation from the Sun in late March; having said that, I am going to start by talking briefly about Mercury. The closest planet to the Sun had its own greatest eastern elongation on the evening of the 10th of February and, for a few days either side of that date, put on a good show, if relatively low in the western sky from the UK. Tony Titchener was able to see it on the 6th from his base in Sussex. He used 7 by 50 binoculars to track it down and noted its yellowish colour, no doubt due in part to refraction effects at its low altitude above the horizon. Once found he was able to follow it with the naked eye as the sky darkened.

I was able to capture Mercury on that same evening. I was actually looking for Venus initially, shortly before sunset and using an aligned go-to mount for my telescope. This had proved successful so I turned to Mercury and was just able to find it in the viewfinder around 1620 UT, still in daylight, and take a video run of some 31,000 frames using a monochrome camera and a near-infrared filter. Seeing proved remarkably good for my location and the resultant stack of the best 1500 frames showed obvious albedo features. I am rather proud of this as it’s the first time I’ve achieved it and I follow in the footsteps of illustrious section members, such as Martin Lewis, who have regularly done this before me. A comparison of my image with a simulation from the Winjupos software, which uses existing surface mapping, shows a good correlation with the features I captured so I am happy they are not just processing artefacts in the image. 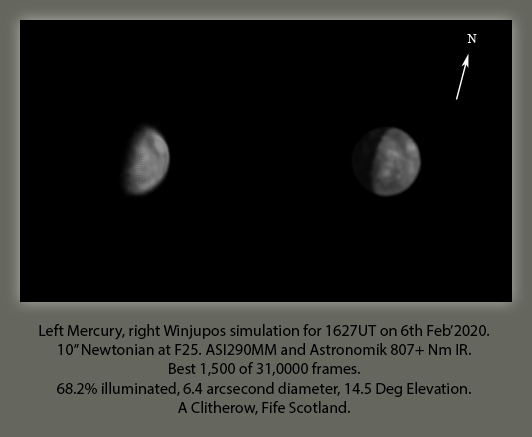 To finish with Mercury; thank you to Laurence Caves for sending his observations of last year’s transit of Mercury and these have been added to the section archives. Moving on to Venus, there have been a good number of observations of the planet, visually and photographically.

The most comprehensive series of observations came from Robert Steele who sent in some 37 detailed reports covering the relative brightness and visibility of the planetary limb, cusp-caps, general disk and terminator plus any hints of cloud features that may also have been visible. Initially he worked from three locations in Australia, covering early December 2019 to mid-February this year, before returning to the UK from where he reported on Venus right up until the 27th of March. His Australian views were unfiltered however once back in the UK he was able to use his W15 yellow and W58 green filters, sometimes separately and sometimes together, to search for more detailed cloud features on Venus. I will summarise his work below but with regard to observing in poor seeing conditions I will quote some good advice he gave in his report from the 11th of January.

“I have seen observational drawings made in such conditions that show delicate features: they are completely unreliable. Any beginners reading this should take note. Don’t strain to see in unsteady conditions, where Venus is concerned, you’ll repeatedly catch illusory banding.”

His observations suggest that in early December the view of Venus was bland with the line of the terminator very even and uniformly shaded, the limb obvious and uniformly bright and with the cusps and disc featureless. By late December the limb was noticeably brightening and in early to mid-January the northern cusp became distinct and obviously brighter than the southern. He started to suspect seeing some faint cloud “streakiness” in both north and south hemispheres. I would mention at this point that during the current evening apparition of Venus, dark cloud features visible in ultraviolet light have been particularly obvious, more so than in any recent elongation that I can recall, and as some people have some slight sensitivity to these wavelengths (I don’t!) they are able to see features on Venus others may struggle with.

By mid-January he notes that the cusps are equally bright and that “filmy-grey shadings fan-out from the terminator in both hemispheres, leaving the impression of a faint bright equatorial wedge pointing at the terminator”. By late-February Robert is seeing a brightening of the southern cusp, another feature noted by several observers, but he then suffered from a bit of a battering from a succession of winter storms and didn’t observe again until mid-March and, initially, with less than ideal seeing. Things improved late in the month with extensive and dusky areas seen extending from the terminator and shading-out mid-disc. His visual estimate for 50% phase came some 5 days before the actual event; a perfect example of the Schroter Effect whereby half phase is usually reported early on evening apparitions; an interesting optical effect.

His final report from the 27th of March notes that that the terminator is “heavily shaded over 90% of its central arc” and is “swelling with ineffable delicacy in three slight and dusky gatherings close to mid disk and the cusps”. 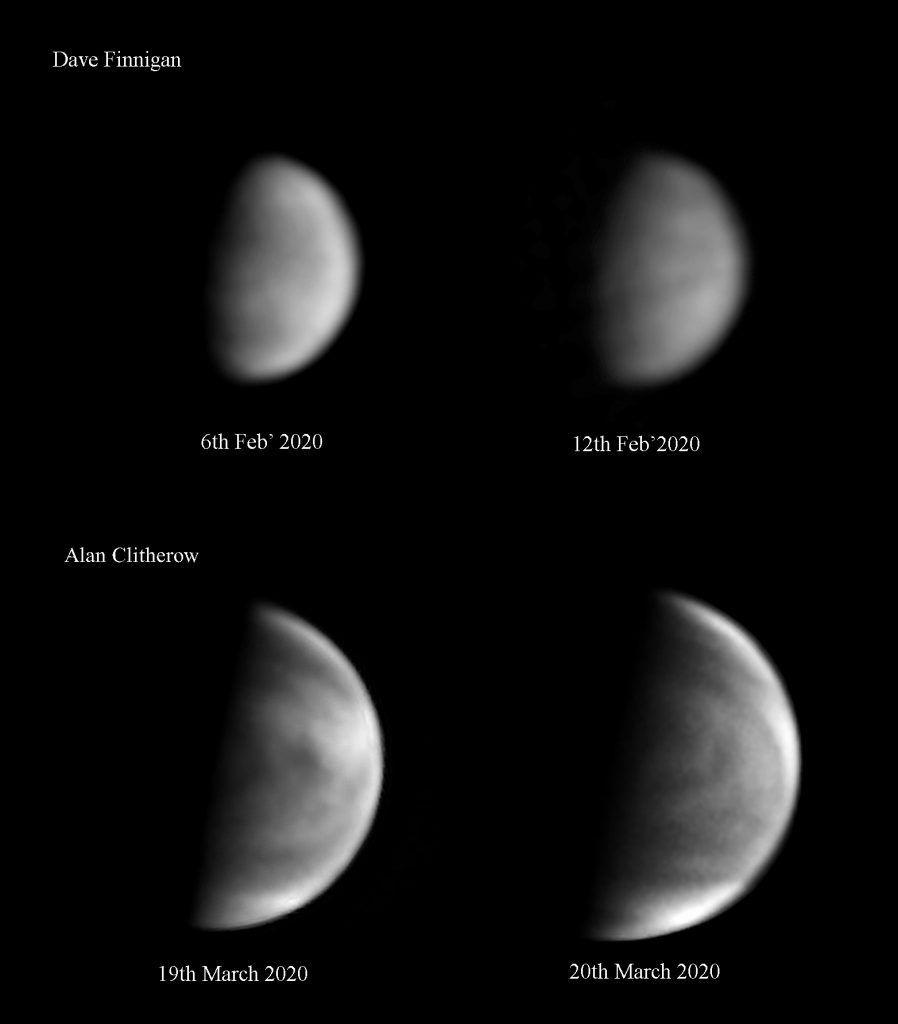 Photographically the dark markings in the UV were well captured. Dave Finnigan caught them growing from the terminator on the 5th of February using a Baader UVenus filter on a monochrome camera. He did this again on the 6th showing more dark protrusions from the terminator and a brighter limb, as did my own UV image from that evening. In infra-red there seems to be some subtle shading and it is interesting to note that a lighter patch in IR somewhat mirrors a darker one in UV. 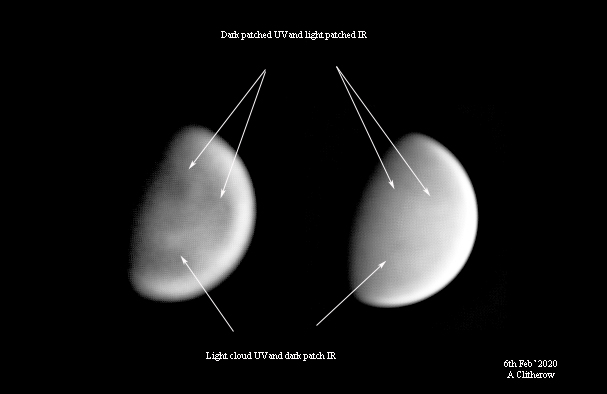 On the 7th Steve Norrie caught Venus in visible light, as did Mark Beveridge on the 8th and these show the uniform brightness often seen in such ‘white-light’ images. 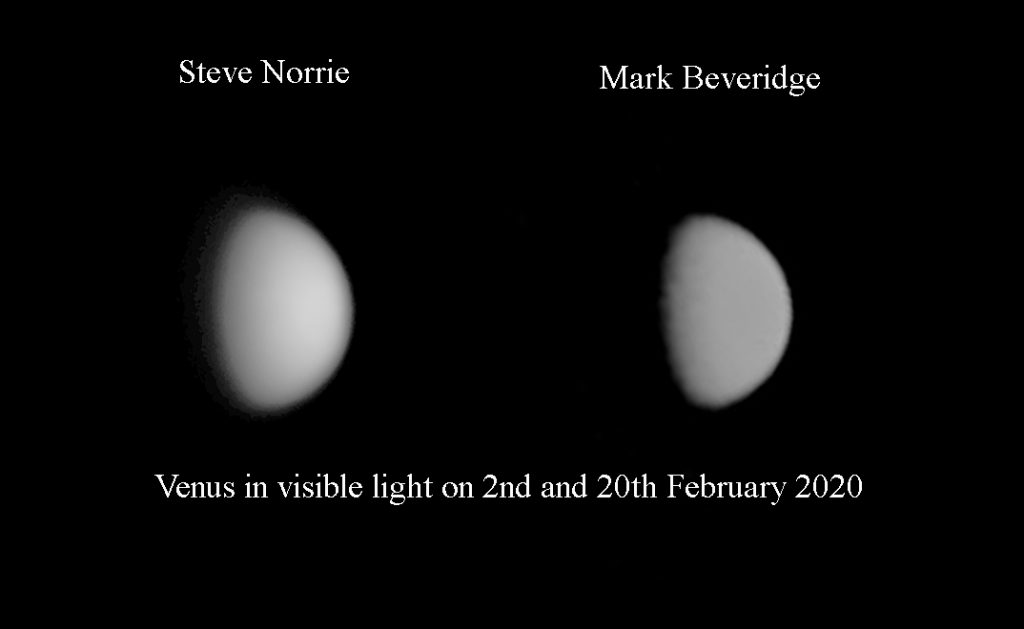 Another UV image from Dave caught a ‘V’ shaped banding effect on the 12th of February with some very subtle IR marks which are, again, a mirror light-for-dark of the UV patterns. To end February he caught more UV detail on the 27th ‘though his IR image is much less obviously marked. On the same night Tony Titchener made a lovely atmospheric wide-field image of Venus in conjunction with the Moon.

Dave sent in his final image of the period on the 1st of March; another UV Venus again showing a dark ‘V’ shaped mark growing from the terminator. Steve Norrie followed on the 4th of March with another white-light image nicely capturing the phase. Steve and I live reasonably close to each other and have both been hampered by poor seeing for much of the period however on the 19th and 20th a large high pressure region pushed the usual jetstream weather feature well south of the UK and gave very steady skies over our location in Scotland. On both nights I was able to capture obvious UV detail but IR detail was extremely subtle and I make no claims!
On both occasions I was able to find Venus in full daylight and capture it at high altitude, negating the need for an Atmospheric Dispersion Corrector and away from the often more turbulent and deeper layer of air that sits between us and targets low to the horizon. If you can do it safely (the Sun must always be kept out of the field of view, preferably, behind a building!) I can thoroughly recommend daytime observing of Venus and other bright planetary targets. Despite being some 6 days before greatest elongation, the phase in these images is very close to 50%. (Not shown here but the IR image is noticeably more of a crescent than the UV image). This is partly a result of processing to try and get maximum contrast on any dark cloud features but the shape of the terminator supports the visual impression mentioned by Robert Steele that dichotomy, 50% phase, appears earlier on evening apparitions than it should do in theory. The difference between UV and IR images is suggestive of how much more light at the deep-blue end of the spectrum is spread into the terminator, widening the apparent phase, when compared with the longer wavelengths of red and IR light.

Venus will continue to be a viable target into the next reporting period and I look forward to seeing some more of the section’s observations.