On the 24th of March the planet Venus will be at its greatest eastern (evening) elongation from the Sun; trailing behind the Sun as it sets by 46 degrees. This makes Venus very obvious in the western sky as twilight falls. Only the Moon shines brighter in the night sky and, on that day, the Moon is new and not visible after dark from the UK. Venus will appear around 40 degrees up, a little south of due-West as the Sun sets and may even be found earlier, in full daylight, with binoculars or a telescope as long as all measures are taken to keep the Sun safely out of the field of view.

Visually this brilliant planet usually shows little detail but use of suitable filters can tease out some faint cloud features depending on the colour sensitivity of your eyes. Photographically Venus is excelling itself at the moment. Most detail is captured outside of the visible wavelengths in ultraviolet light using monochrome planetary cameras. Usually this UV detail is fairly subtle however the current evening apparition seems unusual due to the amount and high contrast of cloud detail on show.

Capturing images in the ultraviolet requires steady skies as these short wavelengths of light are easily scattered by our own atmosphere, however on a good evening excellent cloud features can currently be captured. Ultraviolet light is being absorbed from the sunlight entering the Venusian atmosphere and it is believed that compounds of sulphur and oxygen are responsible; the distribution of these compounds is an active area of study.

Images taken in the near infrared do occasionally show very subtle cloud features but they are more often illusive, however if you do have the required filters it is always worth comparing ultraviolet and infrared images to see how striking the difference can be.

Visually don’t expect to see this kind of detail, however some people are able to see a little better than others at the deep-blue end of the spectrum and they may discern subtle shade variations with careful study. Please do try observing Venus during late March and early April evenings. Try using a range of coloured filters and see just what is on show. 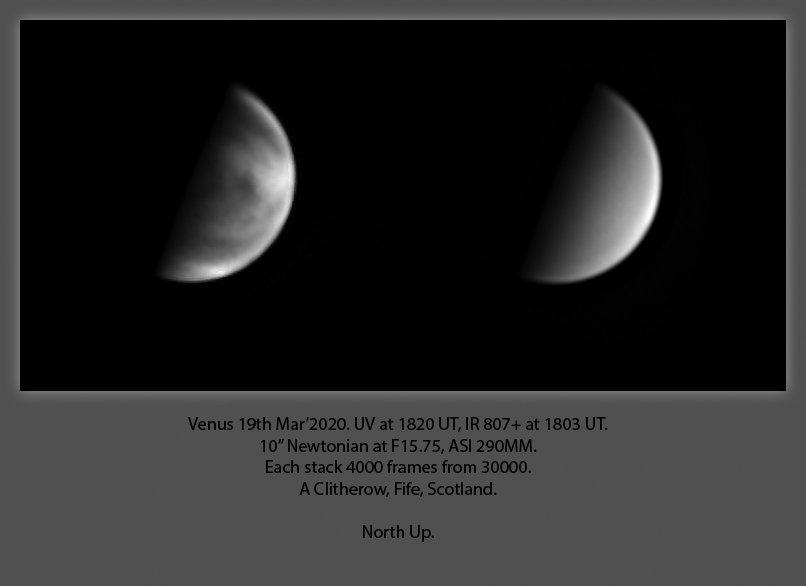