This period started with the receipt of a report of the transit of Mercury from veteran observer Alan Heath. Too late to be included in the previous section report, I am glad to include Alan’s excellent observations here as it contained a hand-drawn image of the transit, something we see all to rarely in this era of digital astro-photography. Like many of us, Alan reports that the weather was “most unkind” on the day, a much politer version of my own descriptions at that time, but he was able to view through short breaks in the cloud using a 3-inch, 76 mm refractor. No sunspots were visible so Mercury appeared as a lonely dark dot during its sojourn on the solar face. 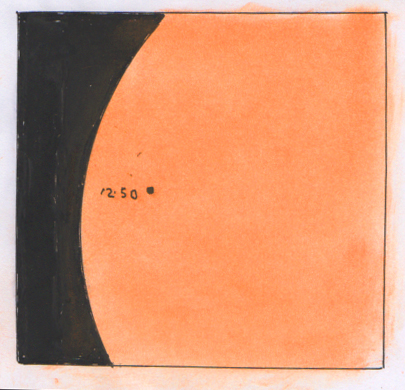 I was also glad to receive observations of both Neptune and Uranus from another senior observer, Anthony Thomas, using a six-inch (150 mmm) telescope in Dorset. He was delighted to report finding Neptune again on the 6th of January, a considerable period of time after his last observation which was in 1992! He also observed Uranus, a much easier target that Neptune, and although there is little to see visually on these remote planets I feel it is always a thrill to find their tiny discs, separate them from the starry background and speculate about their nature. It is surely time we sent further probes to the outer planets.

Martin Lewis has also been observing Uranus and, on the third of December reported having “great seeing conditions”, the best he can remember since 2015. He used a sensitive monochrome camera, the ASI290MM, on his large Dobsonian telescope and took a series of images in the near infrared using 610Nm and 685Nm infrared-pass filters. At the time Uranus presented a disc just 3.7 arcseconds in apparent size and was sat at just under 50 degrees of elevation above his southern horizon; well above the low altitude murk and distortions that have plagued observations of the other major planets over the last few years. He reported getting his best results from the 685Nm filter and picked up hints of two large spots, probably rotating storm features, on the edge of the brighter region that starts at northern temperate latitudes and extends all the way to the pole. These spots seem to indent the darker regions at slightly lower latitudes and rotate with the very rapid jetstreams in the planet’s atmosphere.

The winds on Uranus are reported to be extremely rapid, second only to those observed on Neptune which are the fastest ones yet detected on any planet in the solar system. With speeds of around 560 miles per hour (900 Km per hour) we would expect to see cloud features shift noticeably during a nights observation of Uranus and Martin’s observations bear this out fully. Such observations by amateurs allow tracking and measurement of wind speeds by professionals who often lack access to the expensive and strictly limited time slots available on the world’s largest telescopes. By combining very short exposures and using the ‘lucky-imaging’ technique Martin is able to stack multiple images into excellent final pictures and by mixing these with longer exposures can also place the positions of the major moons within the image. 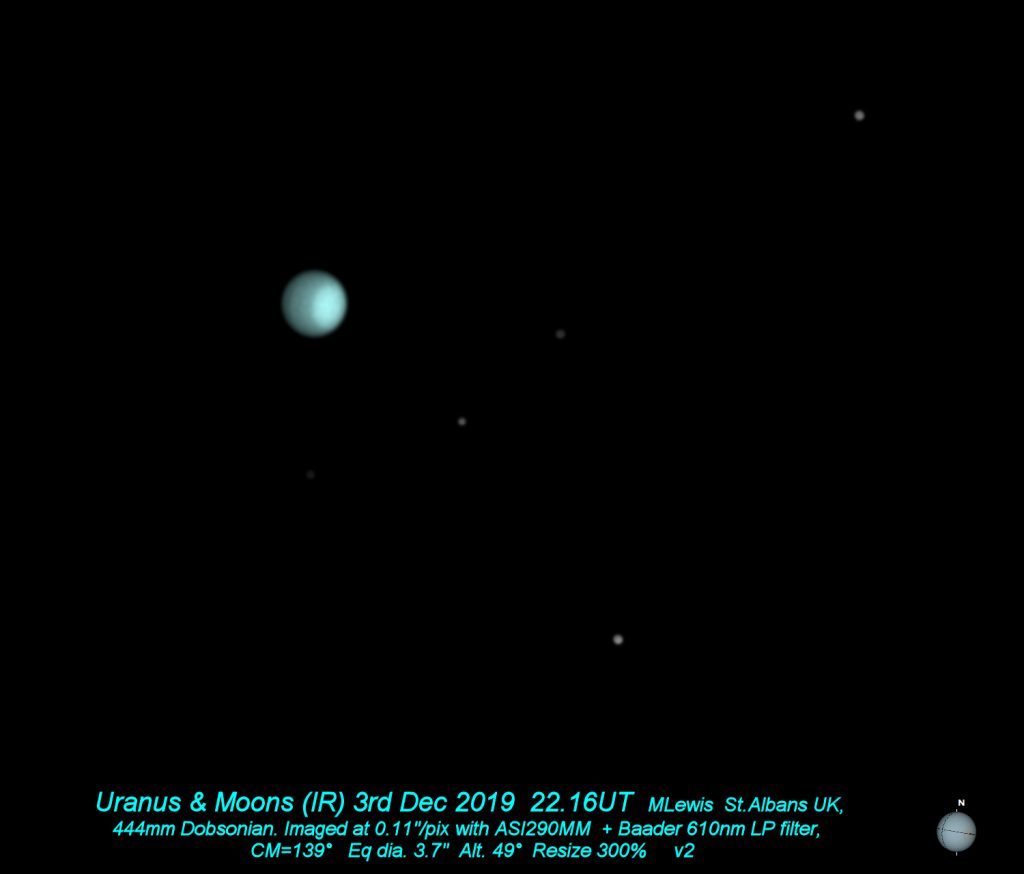 Moving from the outer planets to the inner ones, there were multiple observations of Venus in the period. Venus is improving rapidly as an observation target in the evening sky and can, relatively easily, be found in daylight and tracked at high altitude for best observation. Personally I use a go-to telescope-mount and initially align my telescope to the Sun, in full daylight. Naturally this requires some sensible safety precautions so I ensure both the telescope and the finder-scope are fully and securely capped, then I use a small push-on filter I have made with scraps of Baader Solar Film, a mylar plastic designed to be made into cells that fit across telescope objectives and allow relatively safe observation of the Sun. This filter is placed over the objective of the finder scope and the Sun centred in the cross hairs. With this as an alignment datum I am then able to select a daytime planet as a target and (usually) the telescope will slew accurately enough to place it in the finder-scope field of view. Remove the solar filter and a planet like Venus is quite obvious due to its brightness. I have also used this method to find Saturn, Jupiter and Mercury but I would mention that if the Moon is suitably placed in daylight it offers a much safer alignment target than the Sun!

Over a number of observations in this period I have found generally poor seeing conditions from my location in Scotland and this has been echoed by a number of other observers. Simon Kidd found better than average conditions on the 20th of January and observed Venus with his large Schmidt-Cassegrain telescope, taking images at both 1504 and 1558 UT. This time interval is enough to show movement in the cloud deck of Venus, clouds that also move very rapidly, if not quite as fast as those of the outer ice-giants.

Some Schmidt Cassegrain Telescopes (SCT) are optimised at the red end of the spectrum and Simon chose to use filters passing near infrared wavelengths of light. Contrast on features at these wavelengths is usually very low and requires heavy processing to bring them out, so observing and imaging over an extended time period is the best way to show movement of actual cloud features and to exclude possible processing artefacts from the images. It is interesting to note that Simon used a one-shot-colour camera, the ASI224MC, for his images; it might be assumed that this was a poor choice for infrared imaging however that particular camera has proved to be very sensitive in the IR band despite being designed to capture red, green and blue data.

Visual observers who are sensitive to blue light have reported that dark-blue cloud features are particularly apparent at the moment and this is born out with ultra-violet imaging observations. 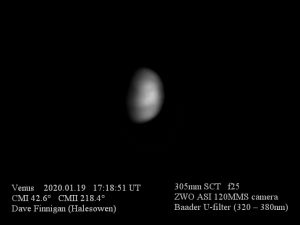 Dave Finnigan imaged Venus in the UV band on the 19th of January using his 305 mm SCT and despite only average seeing conditions caught obvious dark features on the visible portion of the planet’s disc. My own attempts from the 9th and 21st of January only served to prove that there was no point in taking images during poor seeing conditions, however on the 23rd I was lucky enough to get above average conditions for my location.

Ultraviolet light is heavily dispersed by our own atmosphere so getting steady conditions and a sharp focus can be hard, however obvious and large-scale dark markings are visible and these show absorption of UV light at some considerable depth within the Venusian atmosphere. It is perhaps surprising that until recently no one knew exactly what substance is absorbing this wavelength of light however in 2018 research was presented that suggested various combinations of two sulphur and 2 oxygen atoms (4 possible combinations of bonds) produces a compound with the right characteristics to produce the effect. This may be very valuable research once we get to the stage of being able to analyse the spectral characteristics of exo-planets.

I was also able to take infrared images on the same evening using both 642 Nm and 807 Nm filters. Both showed very faint darker features around both the north and south temperate latitudes but nothing so clear-cut as those seen by Simon Kidd; I feel the 807 Nm filter was marginally the best at capturing what detail was available. I found it interesting to note that the faintly darker IR features were entirely outside, at both higher and lower latitudes, to those of the obviously darker UV features ‘though I have no idea what this might imply.
Venus is going to improve in size and brightness in the next reporting period and I hope many observers can add their observations and data-points concerning these remarkable cloud features to the SPA record. 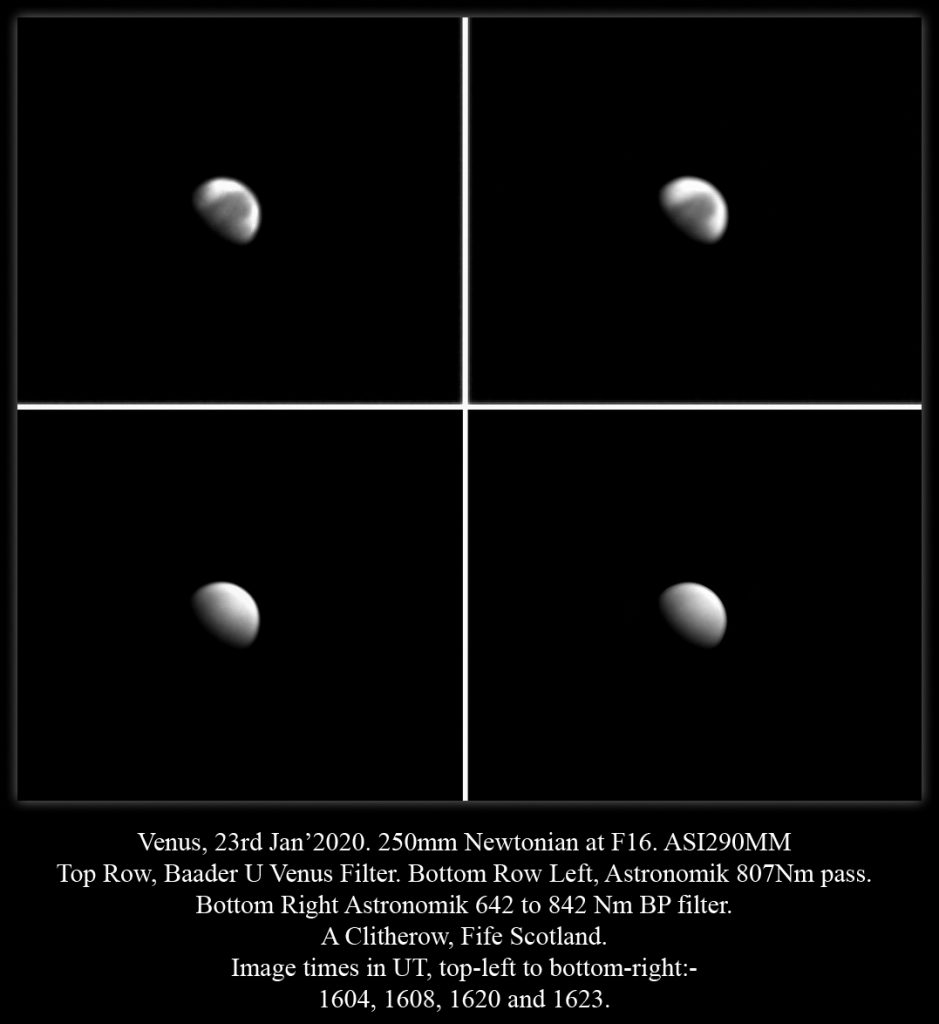