Sadly this period was a poor one for observing the planets and, consequently, there is rather little to report. With the popular targets of Jupiter and Saturn languishing very low in the western evening sky, joined by Venus late in the period, and with Mars equally low in the morning sky and under 5 arc seconds in apparent size, it is perhaps not surprising that that section members reported no observations of these planets in the period. So what was on view?

The obvious answer is Mercury, which made a relatively rare transit across the face of the Sun during the afternoon of Monday 11th of November. Unfortunately this coincided with a period of abysmal weather in the UK and observations were few and far between. A Planetary transit event requires the skills of a solar observer to see safely, so lack of the correct equipment amongst some planetary observers may have contributed to the low number of reports. In my case I was able to take a day off work and to set up both an eyepiece projection rig and another telescope fitted with the appropriate filters to allow direct imaging of the event, only to suffer total cloud cover and the occasional need for plastic sheeting to protect equipment from drizzle! Not a fun day.

Peter Parish was luckier and sent me a comprehensive verbal report of his transit day. He was observing with a friend, initially both using binoculars fitted with specialist filters to allow eye-safe viewing and later observing through an F10 Schmidt Cassegrain telescope with a mylar-film full aperture solar filter. To start with they were thwarted by the cloud cover but later on were able to get glimpses of the event.
“From 1.40pm to 1.45 pm G.M.T (65 to 70 minutes after ingress) we had our first decent break in the clouds. The Sun shone with its full brilliance and through my filtered 10 x 50 binoculars, Mercury was clearly visible as a tiny delicate dot on the orange solar disc.”

Peter reported absolutely no visible sunspot activity so the clear-cut, if tiny, dark circle made by Mercury was very obvious. Using the telescope he then reported,
“The large dinner plate sized white disc of the sun almost filled the instrument’s field of view but Mercury’s little disc stood out sharply and was very obvious and easy to see. The planet appeared very black against the Sun, Trevor and I agreed that to both of us it was perfectly round with a razor sharp limb, quite unlike any sunspot, had there been any to see.”

Both Dave Eagle and Dave Tyler were also lucky during this event in that they had sufficient breaks in the cloud to record it photographically. Dave Tyler used a Herschel wedge on a refracting telescope and a Baader Solar Continuum filter, plus an infrared blocking filter, add to this his planetary camera and he was able to capture the very start of the transit and then bits of it, on and off, through the fast moving cloud cover at his location. He had to use short bursts of video during the gaps that appeared, but from these he produced some excellent images of the event.

Dave Eagle was equally skilled and lucky with the weather, using a specialist solar observing filter on his telescope, a filter that passes a tiny part of the visible spectrum at one of the hydrogen emission wavelengths. He compiled a number of his images into a short animation showing part of the passage of the planet across the Sun; the specialist filter revealing a certain amount of detail in the solar atmosphere behind Mercury but, again, no sunspots. It does seem than the Sun was completely blank on the day. Sadly that was the sum-total of reports I received on the transit, an event that will not be repeated until 2032. 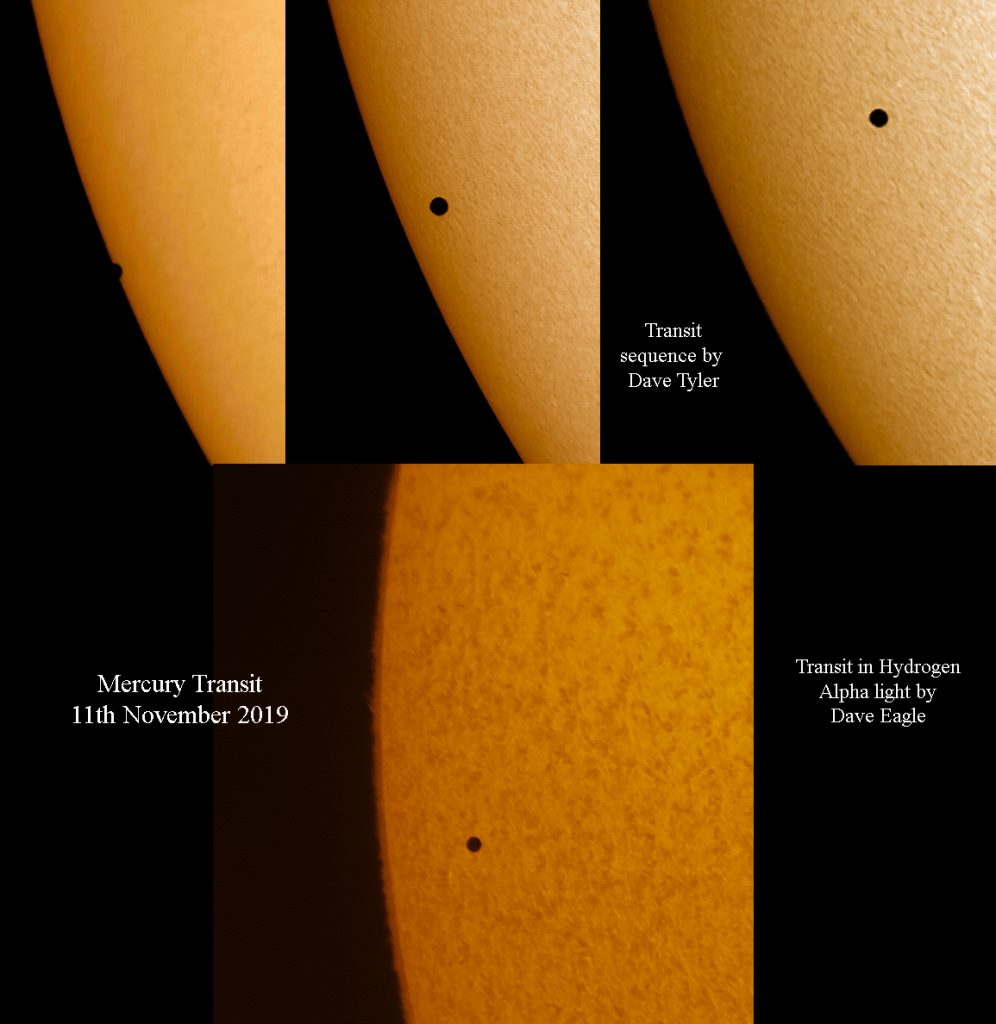 This leaves us with observations of the outer ‘ice-giant’ planets. Neptune was at opposition during the last reporting period but was still reasonably placed in this period. Uranus reached opposition on the 28th of October in an otherwise rather empty piece of sky a little north and west of the head of Cetus the Whale; around 11 degrees south of the magnitude +2.0 star Hamal in Aries. This put it at close to 50 degrees of elevation when transiting, due south, making it by far the best placed planet observable in this period.
One problem with observing the ice-giants can be finding them. Despite having a go-to mount I tried to track down Neptune a number of times and had to examine all the faint ‘stars’ visible in my telescope viewfinder until I found one with a distinctive blue-green colour, then view it under high magnification to see if whatever I was looking at had a planetary disc or remained star-like. Once Neptune was identified I then usually discovered my local seeing conditions to be too poor to permit decent imaging. Uranus and Neptune are both small targets for amateur telescopes, around 3 arcseconds in apparent size, so seeing conditions must be very steady to ensure imaging can be successful; otherwise one is wasting ones time.

Uranus is much easier to find since it is significantly brighter and tends to stand out from the background stars in the telescope viewfinder. Both planets can be imaged with one-shot-colour (OSC) planetary cameras but will reveal little other than some subtle shading. If your OSC camera is sensitive to infrared light, as many modern ones are, then the ice giants can also be imaged in this IR light using the appropriate filter and, of course, monochrome cameras are particularly well suited to IR observation.

On the 26th of October Mark Beveridge managed to image Uranus with an ASI385MC colour camera on a 200mm Schmidt-Cassegrain telescope under fair to good seeing conditions, but he had to fight blustery wind conditions that were moving his telescope about during the session. In the end he produced an image by averaging a total of 6 video-capture runs, all in visible light wavelengths. His picture nicely captures the green or blue-green colour that most people report when viewing Uranus at the eyepiece.

A couple of nights before I was unable to film Neptune, as I had developed hand-controller problems on my goto mount (thankfully this was eventually solved by uploading the latest software version to it) but I was able to track down Uranus and for once found the local seeing conditions to be good. Around this time Dave Finnigan’s laptop died spectacularly when he too was out searching for Neptune so it seems the astronomy Gremlins were out and about. I used a 250 mm F6.3 Newtonian, pushed to F25 by use of a 4-times Barlow lens, and captured three video streams, each of just over 30,000 frames using a monochrome camera and a filter that passed just IR light to the sensor; in this case an Astronomik 742 Nm infrared pass filter. Stacking 10% of these videos into a final image I was able to capture some shading showing the comparatively bright northern latitudes and darker equator.

The orientation of the image looks strange but is correctly presented in that Uranus is, when compared with Earth, lying on its side as it follows its orbit. This was probably due to some titanic collision in the early days of the solar system that knocked the planet over by more than 90 degrees, but whatever the cause Uranus currently points its North Pole in our general direction. I was hoping to capture large-scale storm cloud detail in Uranus’s atmosphere, which appear as white patches in IR images, but none were visible. This is more common in the atmosphere of Neptune which, despite being much further from the Sun, has more internal heat than Uranus and a more active atmosphere.

I think many people are put-off imaging these challenging targets, partly because they need quite long exposures to get obvious targets on the computer screen, and this exacerbates any poor seeing. Martin Lewis advises using short exposures with very high gain and long capture runs, so I thought I would show one single, good quality frame taken from a video 30,000 frames long. Stacking 10% of these produced my final image! It’s quite amazing to me what modern software can do!