Given the short summer nights and the low altitude of the major planetary targets from the UK I was both surprised and pleased with the number and quality of observations sent in to the section during this period. As might be expected Jupiter and Saturn dominated things, so I will deal with them first, but there were a few other interesting images very worthy of comment.

The veteran observer Alan Heath, sent me a summary of his visual observations for Jupiter and Saturn covering the beginning of this period. Alan is 88 years old and has been observing and recording for some 67 years. His notes are clear and concise and give excellent visual estimates of the colour, discernibility and brightness of all visible features on the planets. I will simply say that I value them highly and often use them to compare with the processed photographic results that dominate contributions.

The first Jupiter image came from Mark Beveridge on the 3rd of August, showing the broad and tawny coloured equatorial zone (EZ) with both an obvious Great Red Spot (GRS) and a clearly defined shadow transit sitting above the North Equatorial Belt (NEB). In this case the shadow is cast by Europa which sits a little off the limb and is clearly visible. The fractured nature and thinness of the South Equatorial Belt (SEB) is obvious as is the relative lack of activity in lower southern regions. What is perhaps surprising is that this useful image was taken with just 100mm of aperture through an open upstairs window at Mark’s house, his normal observing site having too many obstructions to see Jupiter at its current altitude of around 10 degrees from Scotland.

Larry Todd then sent in images of Jupiter taken from New Zealand at, unsurprisingly, much higher elevations. The low declination of Jupiter, minus 22 degrees, means the southern hemisphere gets a much better view of things. His first image, from the 4th of the month shows obviously more detail than Mark’s image but the conclusions drawn from it remain largely the same. Some turbulence is still visible in the SEB behind the GRS but this has reduced considerably since the last reporting period and the NEB looks to be more settled with less obvious wave activity caused by intrusions from white oval storms in the North Tropical Zone (NTrZ).

Another image from Larry, taken on the 12th, shows Oval BA just off the central meridian (CM) and almost entirely devoid of colour; it is only made obvious by the dark annulus of cloud that rings it. His image from the 14th captures two small white ovals at higher southern latitudes in the middle of the South-South Temperate Belt (SSTB) and also shows very little belt activity at mid to high northern latitudes.

Martin Lewis’s image of the 19th of August also shows the lack of colour in Oval BA and hints at an oval storm in the SEB, a little above (North) and retrograde of Oval BA. His image from the 22nd is fascinating as it shows a large and obvious dark protrusion from the SEB into the South Tropical Zone (STrZ), the GRS is just rotating into view and the massively elongated shadow of the moon Ganymede lies just on the eastern limb; detail is even visible on Ganymede itself which lies a little west of Jupiter. Mark Beveridge’s image of the same date, taken some 20 minutes later, also captures this shadow transit event.

Larry Todd finished the contributions for August with images from the 29th, again showing Oval BA on the CM, and from the 30th with the GRS absolutely central and showing a small dark feature resembling a pupil in a red eye, the whole surrounded by an outer brown ring. The dark protrusion imaged by Martin Lewis is visible in Larry’s image halfway from the GRS to the eastern limb but is noticeably smaller. The final Jupiter image I received came from the 19th of September via Mark Beveridge and his 100 mm refractor. It also shows a distinct dark feature on the southern edge of the SEB but this is at approximately 100 degrees longitude away from the feature discussed above and cannot be related to it.

Moving on to Saturn and it was Mark who again opened the batting with images taken on the 3rd and 22nd of August showing how well presented the rings of the planet are from our point of view. Again, more detail was visible from New Zealand with Larry’s image from the 14th showing the many coloured bands on the cloud tops of Saturn and a clean Cassini division running around the rings. Dave Tyler then took some very neat images from the UK on the 23rd, with Saturn at 16 degrees of elevation. 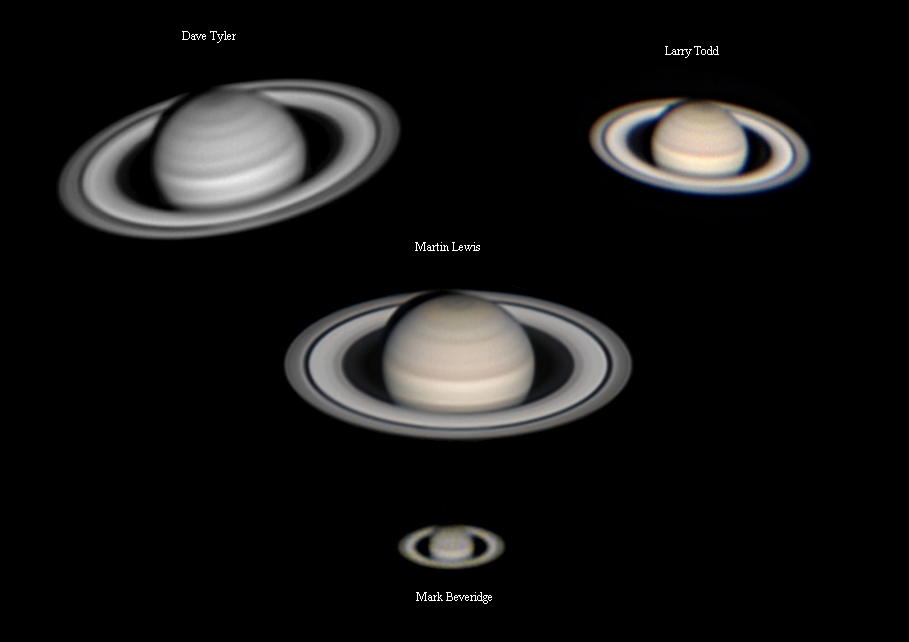 Not surprisingly images taken at longer wavelengths, in the red and infrared parts of the spectrum, show the best detail as these wavelengths tend to penetrate our own atmosphere with less dispersion than shorter wavelengths. Dave’s combined red+IR image shows a hint of the non-circular nature of the dark north polar cap of Saturn; it is in fact a hexagonal cloud structure perhaps similar to the structures discovered recently by the Juno probe at the poles of Jupiter. Martin Lewis managed equally impressive results on the 26th of August using a near IR filter; both Dave and Martin use Atmospheric Dispersion Correctors to help combat the rainbow dispersion effect of our own atmosphere when viewing these low altitude planetary targets. Dave also managed a very good result from the 30th of August despite what he described as very poor seeing conditions.

Mark Beveridge then sent in a Saturn image from the 7th and 19th of September showing the dark shadow of the planet cast on the rings behind it. Certainly the sharpest Saturn images in this apparition then followed on the 19th from Martin Lewis. There must have been exceptional steadiness in the atmosphere at his location for him to capture quite so much detail for a target at just 16 degrees of elevation. His combined image made by overlaying the luminance from an IR-filtered monochrome camera on the colour data from a one-shot-colour camera is quite amazing and does just capture the hexagonal nature of the north polar cap.

On the same night Mark Beveridge decided to try and capture some of the moons of Saturn which he did by stacking a number of 15 second exposures and, in so doing, gives us an image containing Iapetus, Rhea and Titan. He then moved his 200 mm Schmidt-Cassegrain telescope onto tiny Neptune and, again by stacking longer exposures, managed to capture its moon Triton.

Perhaps this activity was inspired by a recent article on photographing the moons of the ice-giants that appeared in another popular astronomy magazine (I’m given to understand that they do exist!) as another contributor, Dave McCracken, then sent in a stack of 30-second guided DSLR images of Uranus in which he has managed to capture very clearly Titania and Oberon, at magnitude +13.9 and +14.1 respectively. A close inspection of the image also shows Ariel at +14.35, right on the edge of the glare caused by Uranus itself, and Umbriel at +14.99, just outside that glare. Very impressive to see these moons at such a vast distance from our own vantage point. 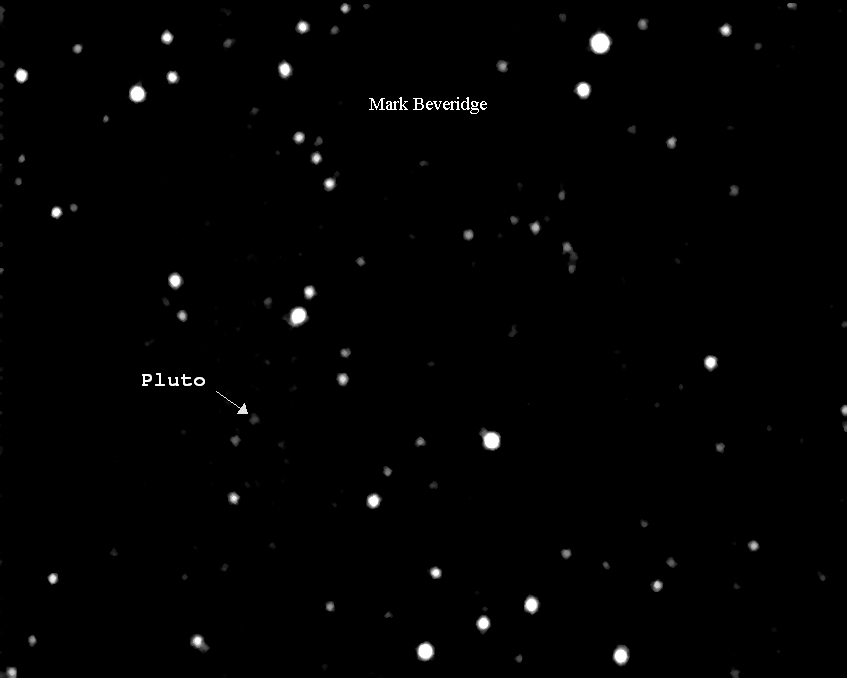 After this, I can invite you to look even further out at an image of Pluto taken by Mark Beveridge on the 25th of August. This (dwarf) planet sat close by Saturn at around 11 degrees of elevation and it took multiple exposures with a sensitive monochrome deep-sky camera to capture it. While certainly visible in his image it would be an interesting project to track its slow movement against the background stars over the course of a few weeks.

Finally, having stared towards the outer fringes of our solar system, we can look at its inner most planet and see Mercury, courtesy of Martin Lewis. On the 25th of August he took some 427,000 images of Mercury as video streams using a monochrome planetary camera and two separate infrared filters. He did this in the middle of the day when Mercury was just less than 10 degrees away from the Sun! 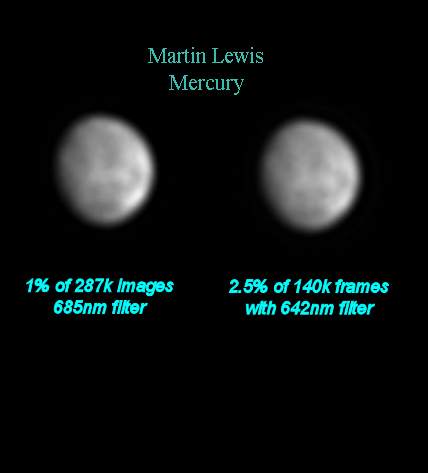 The stacked results unequivocally show surface albedo features that can be compared with data taken from NASAs Messenger probe images. This is quite remarkable and shows just what an amateur is capable of achieving with current planetary imaging equipment.

Thank you to section members for all their contributions and I hope the next period will bring even more fascinating planetary images for me to comment on.