Undoubtedly the most unmissable planetary event in this period is the transit of Mercury across the face of the Sun on November the 11th, however prior to this Mercury puts on a good show in the evening sky for equatorial regions and from the southern hemisphere. The planet is at greatest eastern (evening) elongation from the Sun on the 20th of October being 25 degrees behind the Sun at sunset. Sadly Mercury will be very hard, if not impossible, to see for much of the UK due to its extremely low elevation, but observers near the south coast may just catch the planet above the south-western horizon a little after sunset around the date of greatest elongation. Mercury is very close to Venus at the end of October.

Mercury’s own ‘year’ is 88 Earth-days long and its orbit is slightly inclined to that of the Earth; as it follows this orbit it regularly rises up through the plane of Earth’s orbit at a point known as the ‘Ascending Node’ and then sinks below again at the ‘Descending Node’ half a Mercury-year later. Occasionally our own yearly orbit puts us on a direct line with either the ascending or descending node and the Sun, just when Mercury happens to be at the closest of those nodes. This can only happen in mid-November or early May with an exact alignment roughly 13 or 14 times every 100 years. In November 2019, on the 11th, Earth is in line with the ascending node and Mercury will be directly in line with the Sun, making a visible transit across the solar face lasting nearly five and a half hours.

Because Mercury is small and distant it will show only a 10 arcsecond disc as it crosses the Sun. This makes it too small to observe with eclipse glasses so the best and safest way to see it is by eyepiece projection using a refracting telescope. This method uses a telescope pointed directly at the Sun so there are risks to the equipment which must be considered. The image of the Sun will be projected from the eyepiece directly onto a piece of card which should be shaded to increase the contrast of visible features. It should go without saying that we are only viewing the projected image; under no circumstances do we try and look through the telescope eyepiece or instant and permanent blindness will follow: Please be warned!

It is important to keep the solar image centred in the eyepiece as we are using the telescope objective lens as a powerful magnifying glass and if the beam is off-centre it will melt or otherwise damage any parts of the telescope it falls on. This is best achieved with a properly polar-aligned and motor-driven mount so that only minor adjustments are needed to keep the projected image centred. Cheap eyepieces using plastic components or lenses should be avoided as they are unable to cope with the heat passing through them. At the same time it’s probably best not to use any really expensive eyepieces just in case of accidents! Plossl style glass eyepieces work very well and are not too expensive to replace if the worst happens. Any finder-scopes should remain covered or be removed to avoid accidents.

In this way a bright and safe image of the Sun can be focussed onto paper or card and can be seen by multiple people at once. Photos of the projection will reveal the event but to image it directly you will need to invest in high-quality filters to block out the harmful heat and sheer volume of light from the Sun. Eye-safe solar film can be bought ready-made, or built into home-made cells, to completely cover the telescope objective and, as long as they are designed for solar observation, are completely undamaged and bought from a reputable dealer, they are safe enough to allow direct observation; just as long as they can’t unexpectedly fall off!

When using these solar films it is safest to replace the eyepiece with a planetary imaging camera, then many observers can watch the action on your laptop screen and the images can be recorded to produce a permanent record. If you are lucky enough to have specialist solar observation equipment such as Hydrogen Alpha etalons or energy-rejecting Herschel wedges then the images can be spectacular. However you decide to observe the transit, please do it safely and involve your friends and neighbours; they will be quite fascinated. 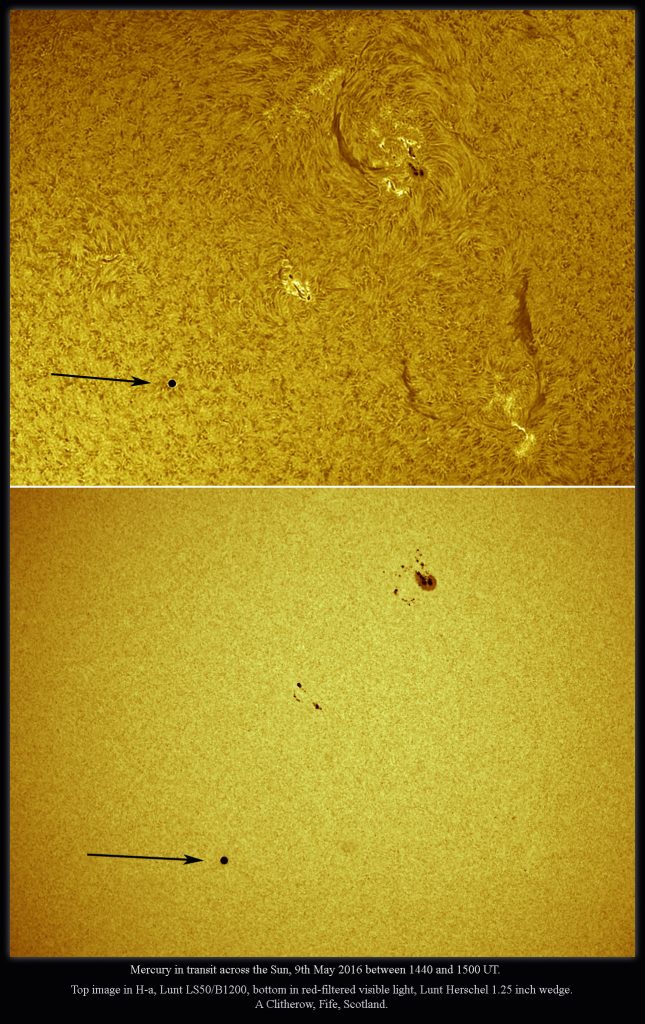 This event will be seen best from south and central America, Canada and the eastern United States but the UK will see much of it, starting from 1235 UT, or shortly thereafter depending on latitude, and continuing until sunset. As the tiny 10 arcsecond disc slips onto the face of the Sun a small projection may be seen connecting the planet to the limb of the Sun, making Mercury look like a black droplet of liquid hanging from the solar edge. This is an optical illusion that frustrated the exact timing of the transit period in the early days of transit observation, most particularly during the extremely rare transit of Venus events. The next Mercury transit will not be until 2032 so don’t miss this one if at all possible. Mercury then goes on to make an excellent morning apparition for the UK with greatest western elongation of the Sun being 20 degrees, best viewed a few days either side of the 28th of November, shortly before dawn.

Venus is in the evening sky during this period but, like Mercury, is very hard to observe from much of the UK. It sits very close to Mercury in early October, just above the south-western sky at sunset with its normal brilliance much dimmed by the depth of atmosphere we see it through. Things improve slowly into November with Venus making a very photogenic pairing with Jupiter around the 23rd and 24th, separated by around 90 minutes of arc. Venus will pass below Jupiter on these dates and be much the most obvious, visible from perhaps 1615 UT onwards, low in the south-west.

Mars is a morning object, rising around 50 minutes before the Sun in early October and slowly stretching further from it as the period progresses. Initially less than 10 degrees from the Sun, Mars stretches to over 30 degrees by late November and is a small but viable target for observation, improving in visibility throughout the period. In late November it is joined by Mercury with the pair closest on the morning of the 22nd, separated by some 10 degrees with Mars higher in the predawn south-eastern sky. Once found, Mars can be followed into daylight ‘though only the largest detail will be visible on its sub-four arcsecond disc.

Well-equipped amateurs may be able to find and follow Jupiter in daylight but by sunset the planet will be low in the south to south-western sky, so the window for evening observation is shrinking steadily as we move through the period. By early November Jupiter sets around 1845 UT and around 1715 UT at the end of November. Catch Jupiter as early as you can to see cloud detail on its still bright and large planetary disc.

The same is true of Saturn which follows Jupiter across the sky around 90 minutes after it. This makes Saturn better placed and sensibly observable in darkness throughout the period, although at a disappointingly low altitude. On the 7th of October Saturn is at east-quadrature, meaning that Saturn sits at 90 degrees from the Sun as viewed from Earth; this means early to mid-October provides a good opportunity to view or image the shadow cast by the rings on the planet and also by the planet on the rings behind it. Saturn transits, due south, around 1830 UT in early October with an elevation, for mid-UK latitudes, of around 15 degrees. By early-November Saturn transits in daylight at 1630 UT but is observable soon afterwards as dusk falls and can then be followed until around 2015 UT. By late November the observable window is closing but Saturn is visible until some two and a half hours after sunset and it is certainly worth seeking out if the evening sky is clear and steady.

Uranus and Neptune present something of a challenge for many observers due to their small apparent size and relative dimness when compared to the more obvious planets; however they are also well worth seeking out. Uranus is at opposition on the 28th of October in an otherwise rather empty piece of sky a little north and west of the head of Cetus the Whale; around 11 degrees south of the magnitude 2.0 star Hamal in Aries. At just under 4 arcseconds in apparent size visual observers will see nothing more than its tiny blue-green planetary disc but well equipped planetary photographers capturing images in the deep-red or near infrared parts of the spectrum will see shading from equator to pole and may possibly capture white storm clouds in the planets upper atmosphere. Uranus is visible for most of the hours of darkness throughout this period and transits at close to 50 degrees of elevation making it the best placed planet for observation from the UK in October and November.

Neptune was at opposition in September so is not as well placed but is still visible for much of the night in October and well into November. Its south-transit time is around 2240 UT in early October, 2035 UT mid-period and 1845 UT in late November. Neptune sits above 30 degrees of elevation at transit, and is found in eastern Aquarius around 4 degrees east of the star Hydor. Its pale blue disc is only 2.3 arcseconds across but similar amateur photographic techniques to those recommended for Uranus have already, this year, revealed storm-cloud features in the North-Polar regions.