June opened with some fascinating planetary news concerning Jupiter; worldwide a number of amateurs had observed small storm features in the southern edge of the South Equatorial Belt (SEB) of Jupiter that were travelling along with the powerful local jetstream, circling around the Great Red Spot (GRS) and shaving red splinters, or ‘blades’, off the spot itself before dragging them away in the opposite (prograde) jetstream just south of the SEB. This led to increased speculation that the GRS was being eroded away and might even disappear completely within a few years! Certainly the spot has been seen to shrink noticeably over recent apparitions and there is a need for intensive future observation to predict the eventual fate of the GRS. These small red blades were particularly bright and noticeable in methane-band images.

Observations with this level of detail, while not impossible, were extremely difficult from the UK due to the very low elevation of the planet and they require periods of exceptionally steady seeing in our own atmosphere. These were very largely, if not quite completely, absent from the UK in this reporting period; fortunately the section also has observers in other parts of the world who were able to contribute. 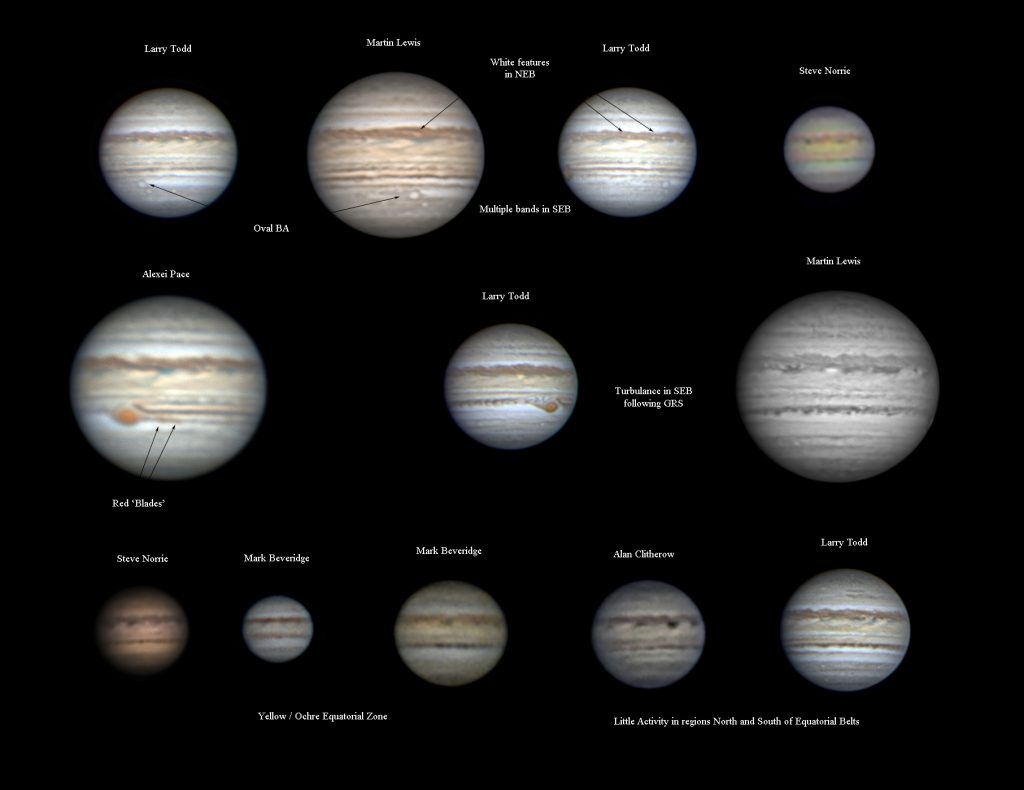 Larry Todd, observing in New Zealand, sent a number of excellent photographic observations, starting on the 4th of June, with the GRS visible and dark features encircling it, although no red ‘blades’ are visible. Alexei Pace, observing in Malta caught a hint of these blades in his image from the 8th which shows two pale red patches, on the very edge of resolution, being dragged away from the GRS by the powerful winds. It will be noted that the SEB has an odd multi-banded appearance quite unlike its more usual thick and dark presentation. This is also obvious in images sent from Scotland by Mark Beveridge dated June 7th. Alexei also sent in an interesting gif animation, made up of 12 individual images showing part of the double shadow-transit event involving Ganymede and Io on the 5th of June.

Larry again caught the GRS on the 12th of June and then on the 15th he caught Oval BA just visible on the limb. Sometimes referred to as “the little red spot”, oval BA seems to have lost all of its former colouration and is now a large white oval, only made visible by the dark cloud ring that surrounds it. Larry’s outstanding image from the 18th of June shows this very clearly along with a total of four bands comprising the SEB and multiple white flecks within the more obvious North Equatorial Belt. Massive festoons sit in the Equatorial zone which is darker than usual, taking on a yellow-ochre colouration.

Steve Norrie, observing close to me in Scotland had to move around in his back garden to find places to set up his equipment from where could observe Jupiter clear of roofs, aerials and chimneys. To be fair I had to do the same myself to avoid the heat plume escaping from my neighbour’s roof (he needs more insulation in my opinion!) and to move the planet clear of an unfortunately placed tree. Oh, for a nice and high planetary target! Nonetheless Steve managed to capture the main features visible on the 21st and 26th using multiple filter combinations on a monochrome camera to try and tease out as much detail as possible. Again, his RGB composite image strikingly emphasises the yellow colour of the EZ. The same is true in an image taken by Mark Beveridge on the 26th which captured a very similar presentation.

I then received images taken by Martin Lewis from the 27th and 30th of June along with more images from Larry taken on the 25th and 28th. Martin’s images again show the nature of Oval BA and the multiple bands within the SEB and also the GRS with some detail in its core but no drifting blades of red are resolvable on that date. It must be said that Martin’s images are remarkable for the amount of detail that has been resolved given the elevation of Jupiter from his location in Hertfordshire.

Moving into July and the contributions continued with Larry Todd and Steve Norrie sending observations from the 1st and 2nd respectively; Steve’s image shows a very dark concentration within the NEB while Larry’s show a great deal of turbulence within the SEB in the wake of the GRS, more obvious in his later images from the 11th. Martin Lewis’s images from the 3rd of July are, again, remarkable given they were taken at 14 degrees of elevation. His monochrome infrared image taken at 2157 UT would be a great result for an image taken at any altitude!

My own images from the 14th and 16th don’t require much comment other than that I tried to compare the results from a 103mm refractor and a 250 mm reflector on a night of rather poor seeing. Perhaps unsurprisingly there was little difference as it was the atmosphere that was limiting resolution rather than the instrument used for observation. 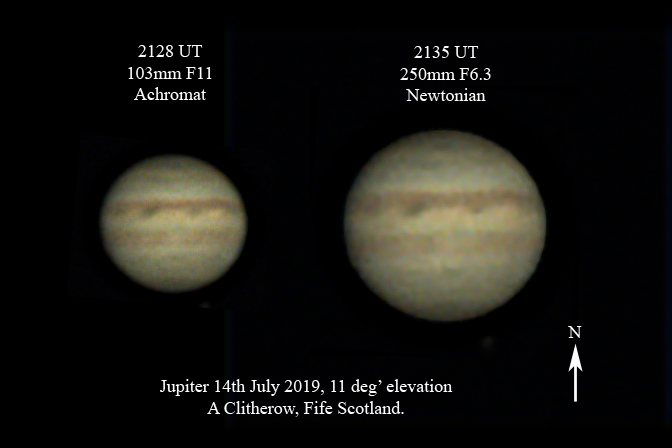 Mark Beveridge also used a 100mm refractor on the night of the 19th, rather than his usual 200 mm Schmidt-Cassegrain telescope. His result shows the dark concentration seen by Steve Norrie and compares favourably with my image of the 16th, taken with a much larger instrument. With telescopes, while size does matter, it doesn’t matter all of the time and there are many nights each year in the UK when the atmosphere limits what is resolvable rather than the telescope. This does not mean we should stop observing and I hope many observers with more modest aperture telescopes will start to contribute observations in future.

Larry Todd again caught Oval BA on the 19th showing it to be the root of an extensive pale zone extending away from it prograde, while Steve Norrie’s image of the 20th resolves what is a dark blur in my own images to be the base of an extensive festoon spreading into the equatorial zone. The accompanying set of Jupiter images is not chronological; rather it attempts to show most of one full rotation with all visible aspects of the planet on view.

With Saturn following Jupiter across the sky some 2 hours after Jupiter it was also reasonably placed for observation, if at the same disappointing altitude above the horizon from the UK. Mark Beveridge tried to capture it on the 7th of June and Steve Norrie on the 22nd July ‘though both admit they found the results less than satisfactory due to local seeing conditions and the relative dimness of Saturn compared with Jupiter. This forces imagers to use longer exposure times to get sufficient brightness which really does not help matters with a target viewed through atmospheric turbulence. 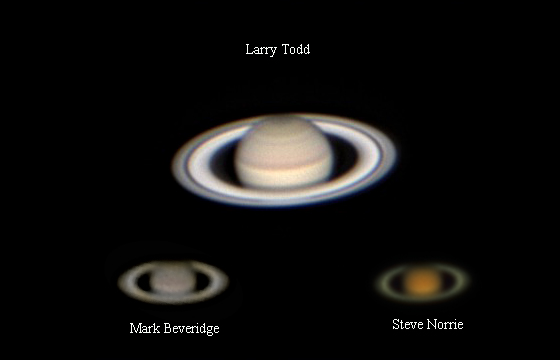 I was asked by David Powell to comment on the use of filters for observing Saturn, with the emphasis on visual observation. This is rather subjective as all coloured filters will affect our view of any planet with some being preferred by one observer and others by someone else. In my case I find yellow filters seem to sharpen the view somewhat with Saturn and I also like the Baader Neodymium filter. This seems to help both sharpness and contrast at the expense of giving the planet a blue colour cast. Of course this is simply my own opinion but I would encourage people to try various filters when observing visually as they may be surprised by the results.

There were some reports of a minor storm feature becoming visible in high northern latitudes at Saturn but nothing was resolvable from the UK. Larry Todd did good work from New Zealand with multiple images from the 8th and 23rd of July. While the earlier images are good, the ones from the 23rd show excellent detail with multiple bands resolved in the northern hemisphere and some angularity visible in the dark cloud that sits as a cap above the extreme North Pole. While the hexagonal nature of this cloud cap is not obvious it is hinted at in Larry’s excellent image.

In the next reporting period Neptune and then Uranus make a return to our morning skies at sufficient elevation for observation. While we might not have caught the storm in Saturn’s atmosphere perhaps we will have more luck with these distant, outer ice-giants of the solar system.