April and May was a rather slow period for the section with little to see and that at rather low altitude. Nonetheless section members managed to produce some very creditable results with observations of Mars, very late in its current apparition, Venus and mercury while both rather close to the Sun and of Jupiter and Saturn sitting low in the south. There is some interesting news regarding Jupiter, but more of that later!

Right at the beginning of the period Mark Beveridge managed to image Mars while only 23.5 degrees above the horizon and just 4.6 arcseconds in apparent size. The dark area of Daedalia Planum is visible stretched across the southern part of the disk as well as the obvious line of the terminator. After this Martin Lewis and Simon Kidd sent in Mars images from the 10th and 11th of April respectively. Martin used a mix of one-shot-colour cameras and monochrome cameras to get both a visible-light view and infrared view of the Martian surface while Simon used an identical colour camera, the ASI224MC, for his visible-light image. Taken just 24 hours apart these pictures show near identical views of the surface with quite remarkable levels of detail on view despite the tiny size of the target. Acidalia Planitia dominates the Northern hemisphere with considerable brightness at the North Pole suggestive of extensive cloud activity over the ice cap. Terra Meridiani sits offset towards the visible limb with fascinating fingers of darker features stretching out from and around Xanthe Terra, and Argyle Planitia is visible as a pale patch towards the southern pole: Remarkable work. 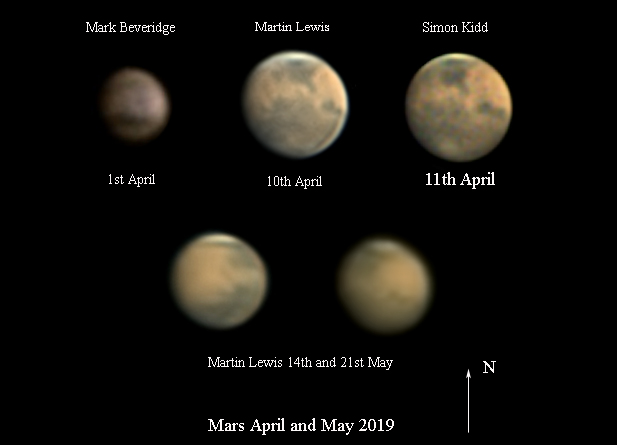 Martin followed up with observations of both Mercury and Venus from the morning  of April 20th, shown below with another Mercury image taken by Simon Kidd in May, in both cases using an infrared filter on a monochrome camera to try and cut through the thermal turbulence of the bright morning sky. With Mercury just less than 7 arcseconds in apparent size and 26 degrees away from the Sun Martin was able to capture some surface albedo features. He used the Sky Safari software and image data from the Messenger probe to create a reconstruction of what might be visible at that same time to compare with his image, and the correlation of detail is obvious. His Venus image from the same morning clearly shows the growing phase of the planet, now well past dichotomy, and a steady darkening towards the terminator as infrared energy is absorbed by the thick atmosphere. No distinct cloud features can be made out but this is usual in infrared images, at which wavelengths cloud features are only rarely captured. 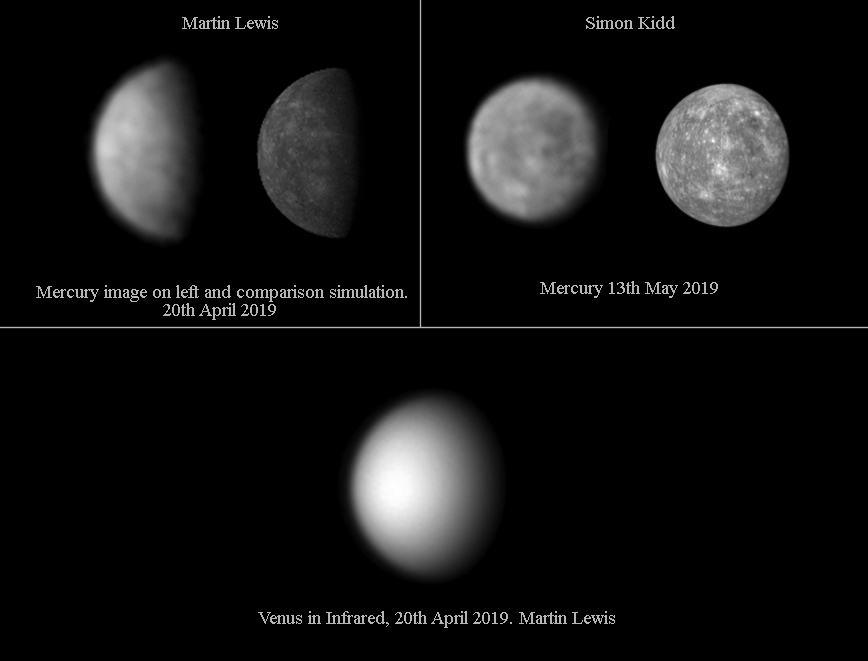 The next contributions came from Larry Todd and show Jupiter on the 24th of April. Some remarkable detail has been captured in which it can clearly be seen that the South Equatorial Belt (SEB) has split into two distinct dark bands; a thin and dark northern element which is incomplete around the circumference, separated by  a pale central area from  a broader dark southern element.  This is also split to give a third dark band visible on a small part of the southern edge of the SEB but this has been drawn into and around the pale ‘socket’ in which the Great Red Spot (GRS) sits, interfacing with the most southerly part of the spot itself and then doubling back on itself and forming a narrow dark band within the otherwise empty South Tropical Zone (STrZ). The Equatorial Zone is full of pale tawny bands and some darker elements that may be fading festoons, while the North Equatorial Belt (NEB) is the most obviously dark feature on the planet; quite narrow but distinct with a waving northerly edge indented by at least one large white-oval storm and associated wave patterns. 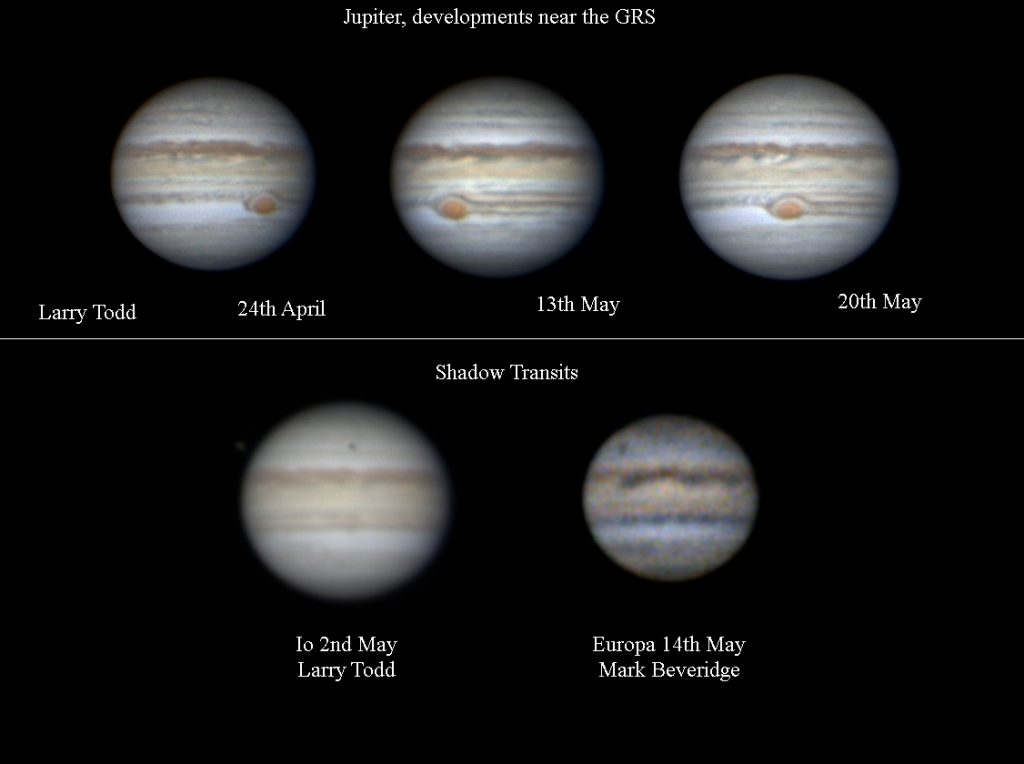 Jumping ahead to the 21st and 22nd of May and observers from the southern hemisphere began to report interesting changes in the GRS region. Small white oval storms, dragged along with the darkest and most southern element of the SEB, were being drawn around the edge of the GRS where they pulled what has been described as ‘blades’ of red material from the spot itself. These cloud fragments, which showed up as very bright in methane-band images (just as does the rest of the GRS), were then ejected into the STrZ, adding to the growing dark band forming there. There has been some speculation that that this loss of material, combined with the slow but noticeable shrinkage in size of the GRS over recent years, might presage the eventual loss of the Great Red Spot itself!  This is not as unlikely as it may sound since the GRS is only a storm feature, all-be-it a very large and energetic one, so it is perfectly possible that its life is transient, even if that life has been long on a human scale.

Larry Todd has the good fortune to observe from New Zealand so he is getting the best chance to see the current apparition. He contributed further images of Jupiter from the 2nd, 13th and 20th of May (corrected to UT times and dates as required) and these show the extensive growth of the dark band in the STrZ as material is drawn from the SEB and spun around the GRS; making the spot itself, if you don’t mind me being rather fanciful, look like a cherry tomato sat in the bowl of a spoon!  His image from the 2nd captures the shadow-transit of the moon Io with the moon itself sat just off the planet’s limb; a similar feat was also accomplished by Mark Bevridge on the 14th of May in an image showing the shadow of Europa crossing higher northern latitudes of the planet. His image was taken from northern Scotland and is a remarkable feat once you remember that Jupiter was around 11 degrees above the southern horizon when he took it! He used an Atmospheric Dispersion Corrector to help fight the rainbow effects so often seen at such low elevations and managed to capture large scale wave effects on the NEB and at least a hint of a very pale Oval BA in the empty area just south of the SEB. 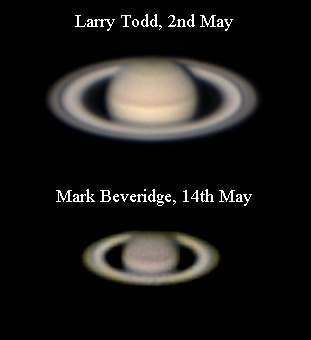 These changes on Jupiter are very interesting, especially those around the GRS, but I find that I have been diverted from the chronology of this section report while discussing them, so will now return to it. On the 25th of April and the 2nd of May Larry Todd sent in images of Saturn. The Cassini division is obvious and the faint inner ‘Crepe’ ring is visible, fading into the blackness of space behind the planet. The shadow cast by the planet on its own rings is visible as are multiple bands and zones in its cloud tops; most obvious is an ochre coloured band at northern tropical latitudes and there is a darkening at the northern polar regions ‘though the hexagonal cloud pattern there cannot be resolved.

As shown higher up in this article, Simon Kidd submitted a Mercury image from the 13th of May. This is quite remarkable since the planet was only 9.5 degrees from the Sun and nearly fully illuminated (93.4%). Like Martin Lewis, Simon generated a simulated view of Mercury with which to compare his image and, again, the correlation with visible features is quite striking. Simon and Martin’s work is challenging stuff, especially due to the proximity of the Sun and to the tiny target size, in this case 5.21 arcseconds. Martin himself then submitted a Mars image from the 14th of May at 1955 UT. This was only shortly after sunset with the sky very bright. Martin could not see Mars in his finder-scope but it was visible in an eyepiece so he was able to then put a camera on the target. At 4 arcseconds in size he was still able to tease out enough detail to identify Acidalia Planitia and Xanthe Terra with a bright northern polar region. On that same day Mark Beveridge caught Saturn from Scotland at just 10 degrees of altitude along with the Jupiter image already mentioned earlier.

Finally I received yet another Mars image from Martin Lewis, surely the last for this apparition? Taken on the 21st of May at sunset, the red planet was just below 4 arcseconds in apparent size with only the largest albedo features identifiable. All-in-all the section members did outstanding work in this difficult observing period and I thank them for their sterling efforts.

I have just received another Mercury image from Martin lewis; this one taken on the 12th of May, one day before Simon Kidd’s image of this target. I add it now for completeness and I know it will be of great interest. 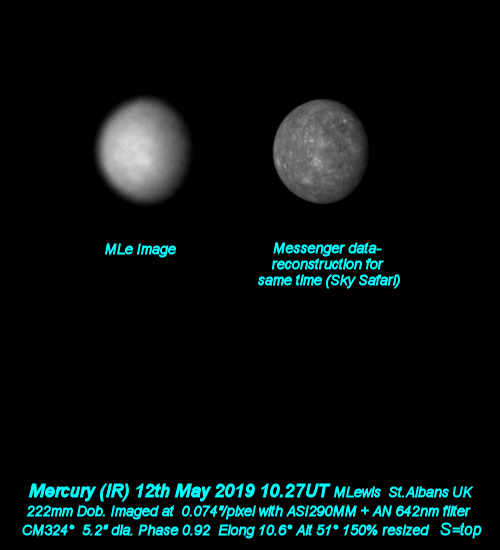