There were really only two viable planetary targets during this reporting period and both of these could reasonably be described as “difficult”. Mars was lingering on in the evening sky, initially at a workable elevation but steadily sinking to the west night-on-night as the period progressed; its main problem was its very small apparent size, starting at 6.1 and shrinking to below 5 arcseconds in late March. Mercury was larger and reached its greatest eastern (evening) elongation from the Sun on the 27th of February, when it stretched to a point 18 degrees to the East of the setting Sun in the evening sky, and was therefore fairly well placed (for Mercury!) in the middle of this period. Section members made the most of both these targets catching some fascinating detail and also experimenting with interesting processing techniques and with full-daytime imaging of Mercury in order to extend its period of observability.

Starting with Mars, the first observations came from Martin Lewis and Mark Beveridge on the 2nd of February with both capturing the Hellas basin area; Martins earlier image from 1706 UT shows Syrtis Major near the central Meridian (CM) while in Mark’s image from 1927 UT this has rotated on to the limb and Sinus Meridiani and Sinus Sabaeus are more visible near the CM. Martin then sent images from three night in a row, 13th to 15th February which allow a direct comparison with images taken by Simon Kidd on the 14th. In these images a dark sinuous area can be seen from Hesperia Planum running uninterrupted through to Daedalia Planum; there is usually a pale ‘gap’ in the landscape visible at around 150 degrees East longitude but this pale gap is not visible in these images while other features of similar size are well resolved. 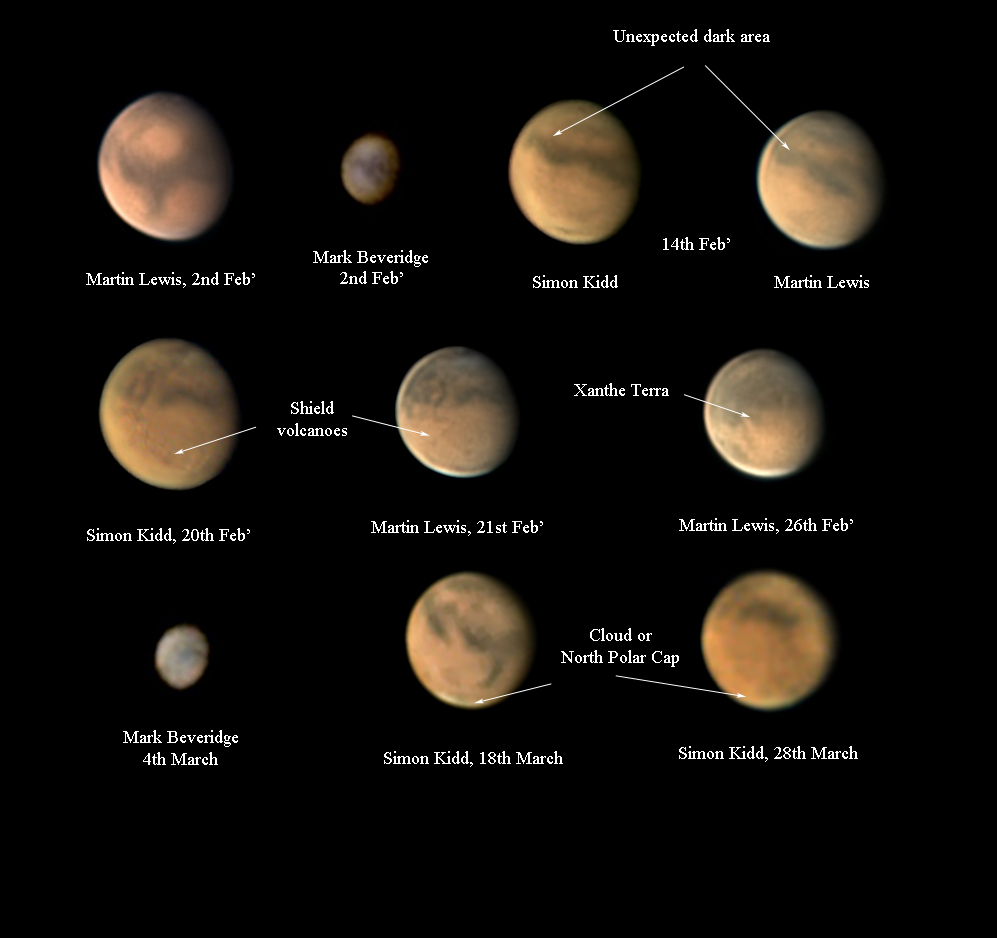 In fact both Simon’s and Martin’s image are particularly dark where this pale feature should be, so perhaps the global dust storm seen last year has somewhat altered visible albedo features, unlikely as this may seem. More detailed observation of the area just to the east of Terra Cimmeria will be needed during the next apparition to be sure. In none of these images is the tiny south polar cap resolvable.

On the 20th of February Simon Kidd took advantage of a “five-minute period of good seeing” to again capture Mars at 1745 UT with the Olympus Mons area on the CM and some clouds just visible near the South Pole. Martin’s image from the 21st shows a near identical scene at 1800 UT with a dark spot visible at the location of Olympus and a line of three other volcanoes running along the Tharsis bulge just on the edge of resolution; again there is obvious cloud around the South Pole. His image from the 24th is less clear but, remarkably, does show hints of the deep Valles Marineris and has Xanthe Terra very obvious. This was followed by another image from Martin taken on the 26th which shows these two features in even more detail and is a remarkable picture considering Mars was just 5.4 arcseconds in apparent size.

Moving into March, Mark Beveridge sent in his final Mars observations for this period taken on the 4th of the month. Seeing was poor with Mars getting relatively low to the horizon, this gave Mark considerable focussing difficulties so he used the best of seven infrared data sets to overlay as a luminance layer on a colour image. Large albedo features are obvious but it is hard to discern enough detail to identify then with certainty; as Mark said in his accompanying notes,

“Due to the conditions & the extreme processing needed, I cannot place much faith on the fainter markings being real”.

It seems obvious we are approaching the end of the current Mars apparition and only two more images were received of the red planet. Simon Kidd managed observations on the 18th and on the 28th of March. The 23rd was the spring equinox for the northern hemisphere on Mars so these images straddled it nicely. At this time the edge of the extensive northern polar ice cap starts to tilt into view and hints of this feature, or of clouds on the edge of it, are just becoming visible in both of Simons images. Syrtis major and Hellas Planitia along with Hesperia Planum and Terra Cimmeria are identifiable on the 18th. The pale patch just east of Terra Cimmeria is right on the limb on his image of the 28th so it cannot be confirmed if this has indeed turned slightly darker, as suggested and described in earlier images. Personally I think it unlikely as processing of images of such a small target is always tricky and can exaggerate contrast effects. Remember that Mars in this period was only a couple of arcseconds larger than Uranus! For now, the implied darkening of this area leaves us with a mystery that members can, no doubt, solve at a future date, though perhaps not until next year!

Mercury had a good evening apparition for northern hemisphere observers in this period with its greatest elongation to the east of the Sun being 18 degrees on the 27th of February. For a few days either side of this it was an easy, if low altitude, target shortly after sunset in the western sky. Simon Kidd, Dave Finnigan and Martin Lewis made the best of this period with detailed images covering the period from the 23rd to the 27th of the month. All three were able to capture surface detail showing a clear correlation with terrain maps taken from satellites and used as surface textures in simulation software. These images are reproduced here and featured in a brief online article on Mercury imaging that appeared on the SPA website. Scroll to the bottom of this article and press ‘Previous’ to view it. 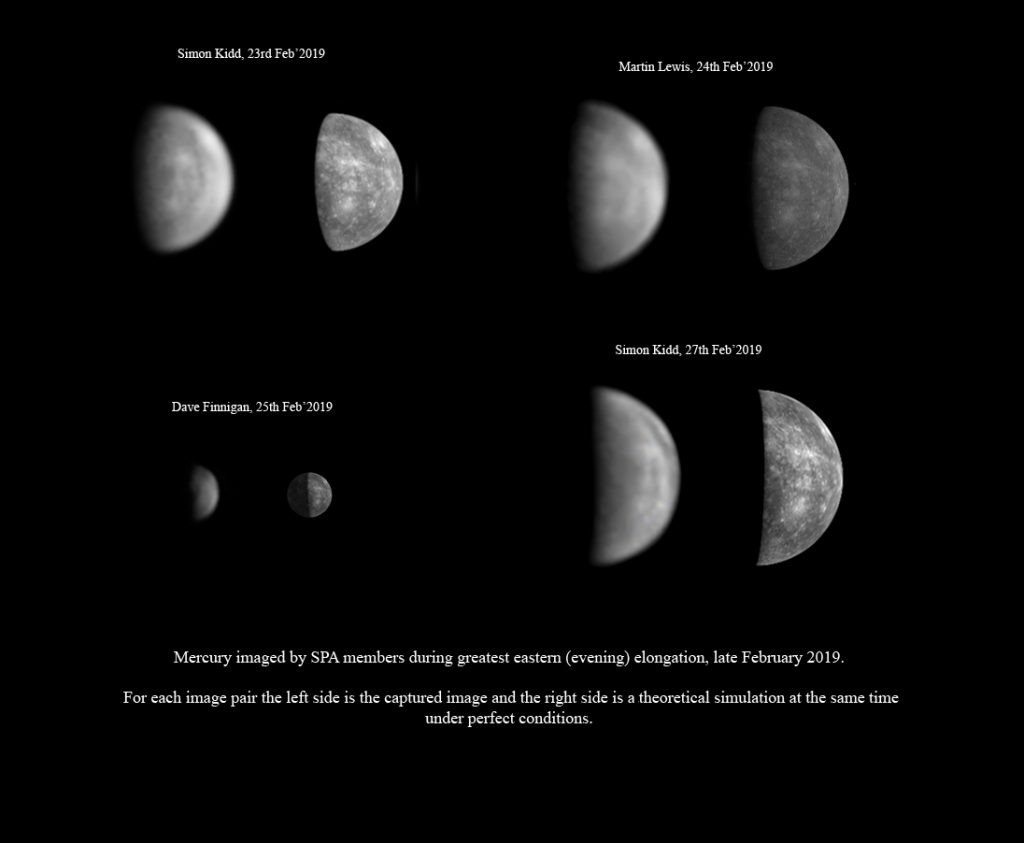 Mercury is one of the planetary targets that doesn’t usually get much attention however these outstanding images show that Mercury detail is well within the range of modern amateur equipment. Martin used an interesting technique to sharpen detail in his image. Using Photoshop software it is possible to apply a small ‘rotational blur’ to an image with the centre of rotation applied exactly at the centre of the planet. This blurred image is then subtracted from the original and the result is an increase in contrast between light and dark features. The technique is often used to enhance faint detail in the corona of images of total solar eclipses and Martin experimented successfully with it here to enhance his pictures of Mercury.

Simon Kidd decided to try imaging Mercury in full daylight after it had passed through solar conjunction on the 15th of March and moved into the morning sky. This is a tricky thing to try and not without danger to equipment or eyesight since the planet lies so close to the Sun; careful precautions must be taken and followed exactly but the results show that daylight observation and imaging are perfectly possible allowing views of the planet higher in the sky and through less of our own turbulent atmosphere. His image from the 24th of March shows little but that from the 29th again captures identifiable surface features showing the technique is perfectly viable. In this way the period of visibility of Mercury can be extended and more amateur observation of its surface becomes possible. 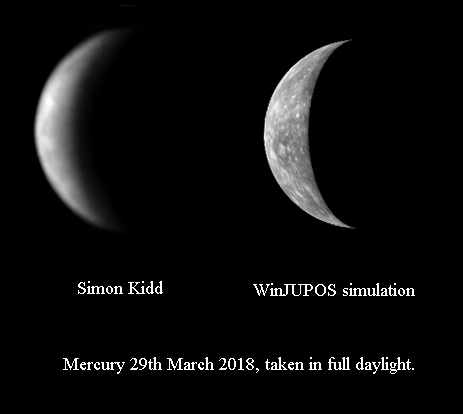 Simon is experimenting with a device known as an apodizing screen. This is well known to the older generations of amateurs but is little known to younger observers. It consist of a grid of overlaying wire nets of decreasing density with a large clear central aperture that is placed over the objective of large telescopes. Subjectively the screen cleans up images of the planets seen during poor seeing conditions allowing more detail to be discerned during these conditions. Objectively, the way an apodizing screen does this is open to some discussion and it may, in part, work as an optical illusion, blurring out the faint defocussed detail such that the higher contrast features ‘pop-out’ more and are more clearly seen. Simon has drawn no firm conclusions on his home-made screen but may be able to make side by side images, with and without it thus helping to assess its worth in the age of digital images. Plans to make your own apodizing screen can readily be found online.

I must also mention the lovely wide-field images taken by Paul Sutherland in late February showing Mercury at sunset and  Venus, Saturn and Jupiter before sunrise.