Friday January 14 presented an opportunity to witness the disappearance of the magnitude +4.9 star zeta Arietis behind the dark limb of the waxing gibbous Moon.

Several observers attempted this event; Mike Clarke (Retford, Nottinghamshire); a team of observers from Macclesfield Astronomy Society, co-ordinated by Paul Brierley and including Andrew Greenwood, Paul Canon, John Tipping and Richard Lowe. Additional reports came in via the SPA Observing Forum, the details for which can be found via this link. The detailed reports are as follows:

Five members from the observing group, of Macclesfield Astronomical Society, were able to witness the disappearance of the 4.8 magnitude star Zeta Arietis by the dark limb of the Moon tonight. It was touch and go whether or not we would actually see the event. The skies were, by 22h 30m UT becoming very milky, making zeta Arietis difficult to see visually. I timed the disappearance at 23h 06m UT, using my 10″ Orion Optics Dobsonian with a 24-8mm Vixen LV zoom (16mm) X75.

The location was Kerridge Cricket club, Kerridge, Bollington, Cheshire. The seeing here is normally magnitude +5.6 but tonight, we were struggling to see +3 because of the approaching cloud but also the wide gibbous Moon. The seeing was ANT IV.

We all confirmed the disappearance at 23h 06m UT. And we were all greatly relieved when the star finally disappeared . The Moon was, by 23h 04m beginning to make some of the observers’ eyes water, because of the intense concentration needed, to see the slowly fading star. We had all been watching from 22h 50m UT.

Mike managed to successfully observe and time the event, and has produced the following digital image and report: 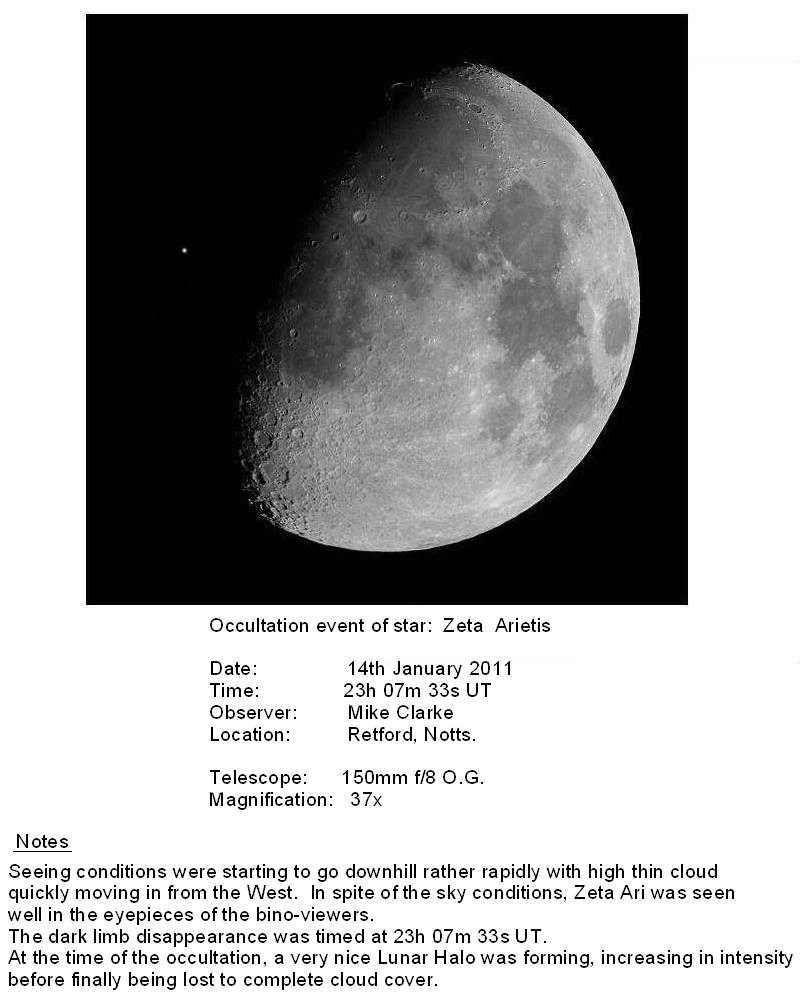