Well, what an amazing year for Perseids! For once, we were blessed with mostly clear skies, the young Moon didn’t interfere – and the Perseids really came through. 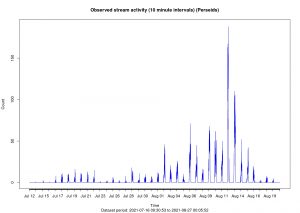 Just under half of these were seen by more than one station, leading to 2,500 orbits being calculated!

Visual observers also had a great time, summarised in the table below. I should add that the McIntyre’s tally of 86 is a combined ‘score’ for Mary and I who were back-to back shouting “woah! Did you see that” at the latest sighting, knowing perfectly well that the other had missed it!

The Perseids were also interesting this year as there was a predicted outburst on the 14th at around 14:00UT. While it was not possible to visually observe from the UK, radio detectors do appear to have picked it up faintly as shown in the heatmap below and observers in the western US were able to confirm it from video data. 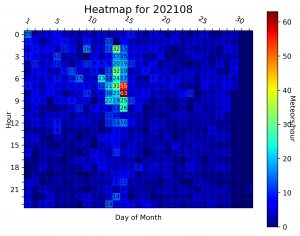 We also had a few pictures sent in. Mary McIntyre submitted a lovely image of a Perseid shooting through the Plough, while Jeremy Phillips reported a Perseid with a very long trail, with a second event very close alongside. A couple of other observers reported the same thing seen visually.  Meanwhile, Pat Franks, who is setting up a meteor video detector, picked up a probable Perseid on his first night! 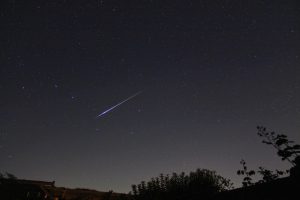 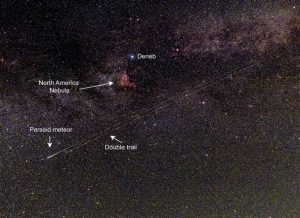 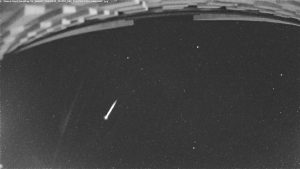 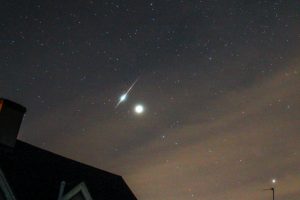 Several observers reported Kappa Cygnids. This shower coincides with the Perseids but is easy to distinguish as the radiant is very different. The shower tends to produce many fireballs, and Mary and I indeed saw several.  Mary captured this fantastic image of a fireball near Jupiter, over our house.

Also observed during this period were Southern Delta Aquariids and Capricornids. These are again distinguishable as the radiant is mostly below the horizon for UK observers.

In addition to these showers, the UK Meteor Network picked up several hundred Aurigids, with a peak in early September, and 1800 September Perseids which also peak around 7th September.

A truly remarkable piece of detective work has tracked down over 700g of meteorite in Slovenia.  There’s more about this in a News article on the website but here’s a brief summary.

18 months ago, a daytime fireball was observed over the Balkans and captured on a number of dashcams, doorbell cams and even a helmet cam. Normally, scientific analysis of daytime events is limited, because we need background stars to determine the exact direction the camera was looking in and how bright the meteor was. Furthermore, for meteor analysis, its critical that we know the exact location of the camera but dashcams are moving often as fast as 70km/h, and their location is not well known.

So, a team in Canada led by Dr Denis Vida of the Global Meteor Network came up with a different way to calibrate the data. Firstly, local people were asked to take pictures of the same scenes from precisely known locations using a GPS. Then the team painstakingly measured the apparent heights and positions of local landmarks such as lamp posts and buildings. These were compared to the video footage, which enabled them after months of work to determine the precise location and field of view of each still from the dashcam video.

They were then able to use the RMS software to calibrate the images and to then combine multiple cameras’ views to work out the trajectory of the meteor – and thus the fall zone – to within 50 metres. Sure enough, a search of the area has since turned up 700g of material, with at least 1.8kg believed to have been lost to agricultural activity in the 18 months since the meteorite fell.

This extraordinary piece of detective work was very labour intensive and is unlikely to be repeated. However, knowing the people involved, I fully expect an automated solution to be in the pipeline. Then we will have the opportunity to recover even more meteorites!

As experienced meteor hunters know, June and July are quiet months for us. Indeed, the UK Meteor Network video detection network picked up almost no detections from mid-June to the end of July.

Most active showers in this period are weak and have radiants close to the Sun, making them daytime-only showers. Such showers are generally only visible with radio detectors. Phil Hayward monitored some of the daytime showers with his radio, finding a broad peak in the Daytime Arietids around noon on the 6th of June plus peaks of the Zeta Perseids at around 11am and 7am on the 9th and 10th of June.   My own radio detected a background noise of 100-120 meteors per day, with a possible peak around 6th June corresponding to the Daytime Arietids, but as is now becoming a common occurrence, satellite swarms are generating more and more false detections so some of these data may be noise.

Lets hope for clear weather for the late summer and early autumn showers! 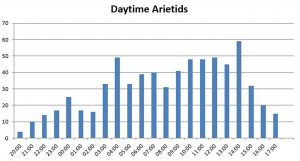 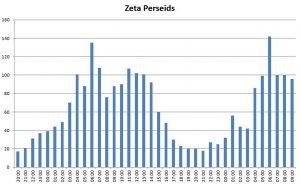 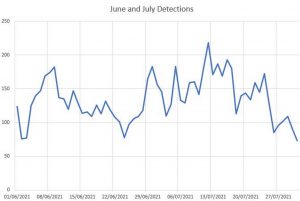 April and May are quiet for visible meteor showers, with many showers’ radiants being too close to the Sun for night time observation.  There are a few exceptions however.

The Lyrids peaked on the night of 22rd Apr and some activity was reported. Sandy Allan was clouded out on the 20th and moonlight spoiled the 22nd but managed a couple of hours on the 21st. Sandy reports considerably more satellites than meteors, with the 1st quarter moon interfering and only one meteor spotted. The UK Meteor Network managed to identify 110 over four days, with a sharp peak on the night of 22nd and rapid fall off thereafter. Phil Hayward, using a radio detector, saw a similar pattern, again interfered with by satellite passes. By contrast my own radio detector showed a sharp peak a day later on the evening of the 23rd, though yet again satellite interference confused the data and this peak may be spurious. These artificial objects are really becoming a problem for radio and other astronomy.

Moving into May, Phil Hayward monitored the Eta Aquariids and the Arietid showers which are all essentially daytime showers due to the proximity of the radiants to the Sun, and hence are good targets for radio measurements. The UK Meteor Network also reported on the Eta Aquariids. Analysis shows peak activity was broadly in line with expectations, just before dawn on the 6th of May but with detections any time from 29th April through to 27th May.

There are now no significant showers till mid to late July.

Normally, February and March are quiet for meteors – but not this year!

The remarkable Winchcombe meteorite event is of course now well reported, but its worth recapping anyway. At 21:54 on February 28th, a spectacular fireball was picked up on many cameras across the UK and northern Europe run by a number of amateur meteor detection teams including members of the SPA. The videos showed the meteor fragmenting as it streaked through the atmosphere. 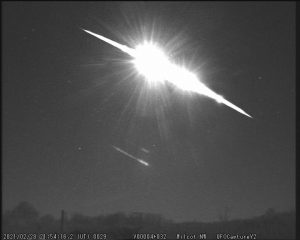 An international team of both citizen and professional scientists was rapidly assembled to analyse the reports. Working through the night, the team showed that the meteor had been monitored right down to an altitude of 25km, suggesting that it was likely that fragments had reached the ground. Further analysis narrowed the potential fall zone down to Gloucestershire and West Oxfordshire.

Covid restrictions meant that scientists could not immediately visit the area, but a call went out to the public via TV, Radio, papers and social media, to be on the lookout. The following day, a family in Winchcombe found a chunk in their driveway, and further fragments were subsequently recovered. The meteorite was collected so quickly that its in almost pristine condition, on a par with the samples returned from Asteroid Ryugu, and will provide a treasure trove of scientific data.

The contribution of amateurs to this amazing event can’t be overstated. The networks of cameras run by ordinary people (including this author) were crucial in tracking the meteor, citizen scientists carried out the initial analysis and enlisted experts from as far afield as Canada and Australia to validate the finding, and it was amateurs who publicised the event via social media and the press. Without this significant amateur contribution, the professional science could not have started. If you’re interested in getting involved please drop me a line at meteor@popastro.com.

It’s been a bit of a period for fireballs in fact. Besides the Winchcombe event, Ryan Gay reported a bright fireball at 21:17UT on February 18th, visible to the North West from Kingston upon Hull. Graham Winstanley picked up the Winchcombe event on his all-sky camera. Robin Scagell picked up a fireball on March 3rd at 20:03 and I picked up several bright events on my own cameras, notably a magnitude -3.2 near-fireball on Feb 3rd. Several other reports were made on social media though sadly not all were logged with the IMO so I can’t report the exact times and dates.

If you do see a bright meteor, I strongly encourage you to report it either via our website or the IMO’s site. The reports provide valuable information that can help validate and improve analysis such as that which led to the Winchcombe Meteorite being found.

A number of people have asked on social media whether it is unusual to have so many fireballs. The answer of course is no. Every year, there are hundreds of fireballs reported around the world – in the UK alone we could expect to see up to 50 so although they’re more common in August and December when the big showers are active, statistically we might expect to see two or three per month. So, don’t worry, its not a harbinger of doom, just a statistical coincidence!

Quadrantids
Sadly the Quadrantids were clouded out for most observers, so only radio reports were sent in. 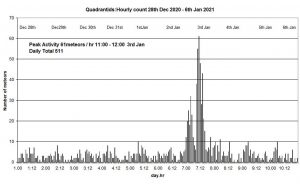 Fireballs
Three fireballs were reported by members during this period. 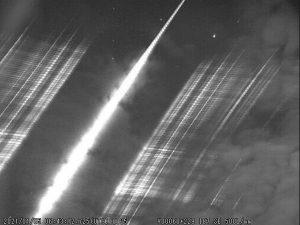 Finally, James Foster reported a bright fireball at 06:43UT on the 5th of January. This event was also picked up by Michael O’Connell in Ireland, who was using a spectral grating on his camera at the time as shown in the picture. This event was also reported to the International Meteor Organization by several members of the public. Analysis indicates it travelled over Cornwall and the Irish Sea, heading towards the Isle of Man.