Despite rain and cloud there were many observations sent in.

The ever-reliable radio of Phil Hayward picked up a strong peak at 22:00UT on the 13th of December, detecting about 200 meteors per hour at one point. My own radio detector  (see right) showed a similar peak and suggested that there may have been a second peak a few hours later at around 05:00UT. 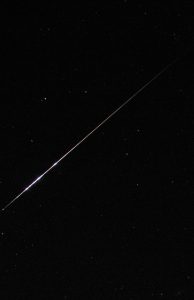 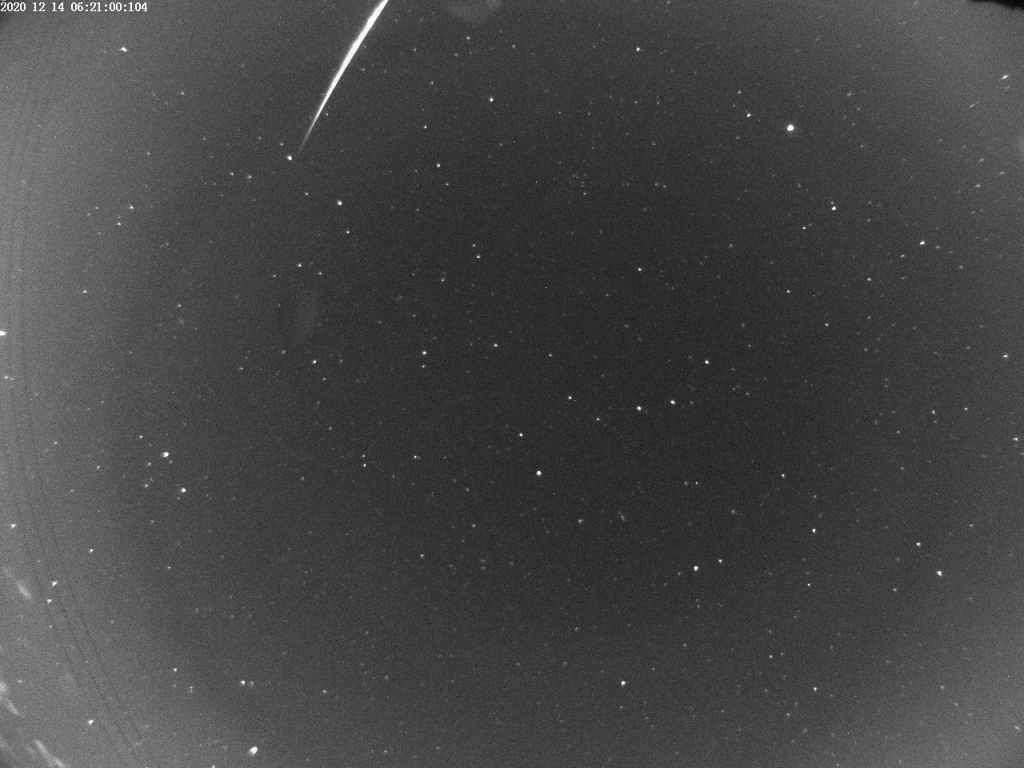 Turning to video detections, the UKMON network picked up 687 detections on twenty cameras, including 107 detected by more than one camera, and the data shows the same double peak that my radio detected. Meanwhile Graham Winstanley also had a camera running and captured several dozen meteors over the period of the peak. One detection that I checked matched with a UKMON confirmed Geminid with absolute magnitude of -3.6.  Another, shown here, matched with a detection by one of my own cameras. I am sure there are more matches!

The Ursids were also picked up by several members. Tom Banks visually spotted 23 Ursids and four sporadics between 03:02UT and 07:26UT on the 23rd. Tom also had a camera running to create a star-trails and captured the fantastic image seen here, with an Ursid streaking through the left of the image and a possible second on the right. Phil Hayward reported a weak peak on the radio detector at 05:00UT on 23rd, while own radio suggested a slightly later peak at 09:00UT on 23rd at about four times background level. A similar pattern to Phil’s data was detected by other radio observers that I heard from via social media.

October and November can be pretty good months for meteor hunters as we have five interesting showers during this period.

The first interesting shower was the Draconids which peaked on the night of the 8th / 9th. Occasionally there are outbursts of activity but this year activity seems to have been very low. There were no confirmed detections on the UKMON video network, or on my own radio, only three on the Global Meteor Network (GMN) and while Phil Hayward was monitoring by radio, rates seem to have been the same on the 7th 8th and 9th. It is possible the shower is dying.

The Northern and Southern Taurids come next. The southern Taurids have been shown to have a resonance with Jupiter, and are the subject of some interesting scientific studies at the moment which I’ll mention again later. Video networks detected activity throughout both October and November and Brendan Shaw who was observing on the night of the 15th, saw two or three Southern Taurids as well as four sporadics and some possible early Orionids. The Northern Taurids were also active throughout though at a lower level of activity.

Most of the UK seems to have been clouded out for the peak of the Eta Geminids, on the 18th. My radio did detect a weak peak at 6am on the 18th and GMN data from more fortunate countries seems to corroborate that.

The Orionids on 21st to 23rd October are the best shower of October. Phil Hayward once again carried out radio monitoring showing a broad peak between 1am and 7am on the 23rd, which was also seen by my own radio detector. Both GMN and UKMON also showed a strong peak around this time, with the global network recording over 450 detections from multiple stations! 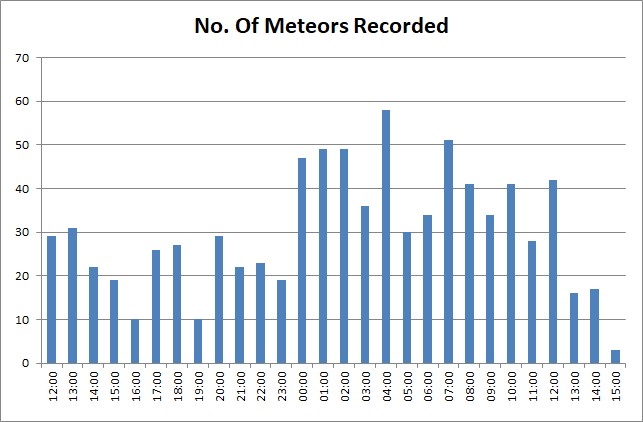 Lastly we have the Leonids which peaked around 17th-19th November. Radio observations from Phil and myself again showed a strong peak around this date as shown by the graph of Phil’s data shown here. Video detections from both GMN and UKMON also showed strong peaks around the 18th. 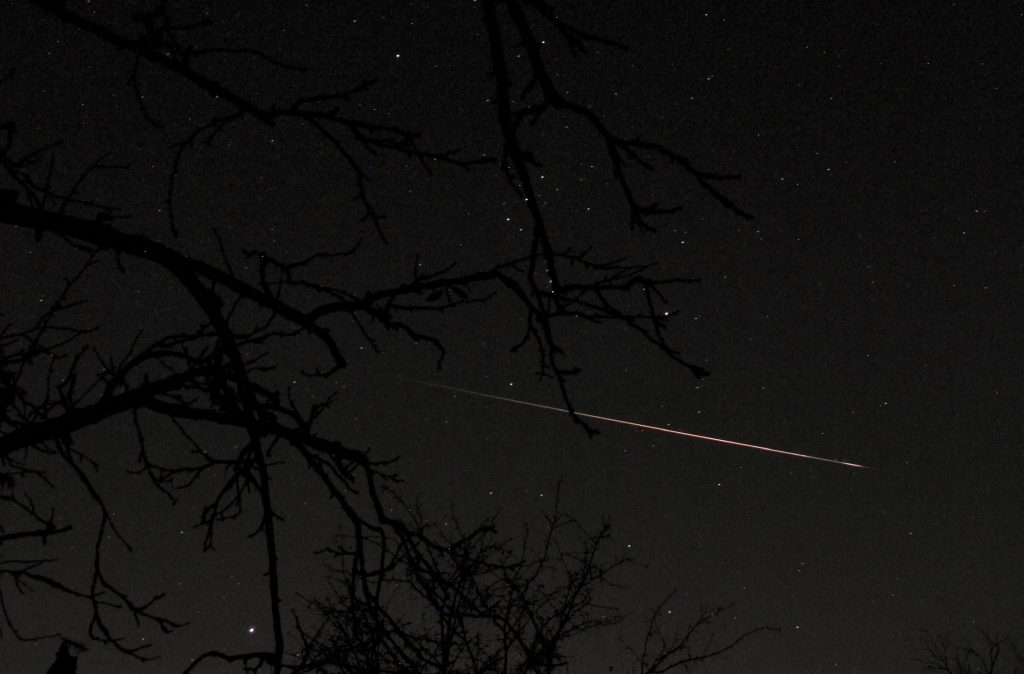 The most interesting event though was the detection of a bright Leonid fireball on the 23rd. This was picked up by Tom Banks while photographing Orion, but also by eight stations in the GMN, FRIPON and UKMON networks, and by my own radio detector. I was able to combine the data to calculate the details of the meteoroid that caused the fireball, and can report that it was a mag -6.1 Leonid that entered the atmosphere at 72km/s and probably weighed about 0.5 grammes. It passed across England from the Thames to the Severn in about 2.5 seconds, dropping from 148km to 93km before burning up completely over the Bristol Channel.  Before hitting the atmosphere, its orbit was quite eccentric and had it missed us, it would probably have left the solar system forever.  You can see the full detail here https://tinyurl.com/y4hepr9o

While this information is fascinating, it is also scientifically valuable. Earlier I mentioned that the Southern Taurids are in a resonance with Jupiter which is keeping their orbits fairly fixed. We know this because of calculations like the one I just did. Interestingly, there are also believed to be up to 100,000 asteroids trapped in this same resonance. The Southern Taurids hit our atmosphere every year (otherwise we wouldn’t see them!) and so the asteroids trapped in the same resonance could too. We really want to know more about such Potentially Hazardous Asteroids! By studying the Southern Taurids and how they behave, we get to know more about how these other objects might behave and whether they may be a hazard to spacecraft or even the Earth.

And the great thing is, the stations that detected this fireball, and detected the Southern Taurids, are not run by professional astronomers in professional observatories. They’re run by people like you and me, in their back gardens and garden sheds. This truly is an area where ‘citizen science’ is making a difference!

For the second year in a row, I must report a near-washout for the Perseids as a huge thunderstorm rolled over much of the southern UK.

Aside from flashes of lightning and ominous black clouds, video camera data from UKMON did still show a strong peak on 11th and 12th August. Data for 13th is missing due to cloud.  Radio data is unaffected by stormclouds and shows a peak in the early hours of the 13th. The visual and radio data are shown below (figs 1 and 2). 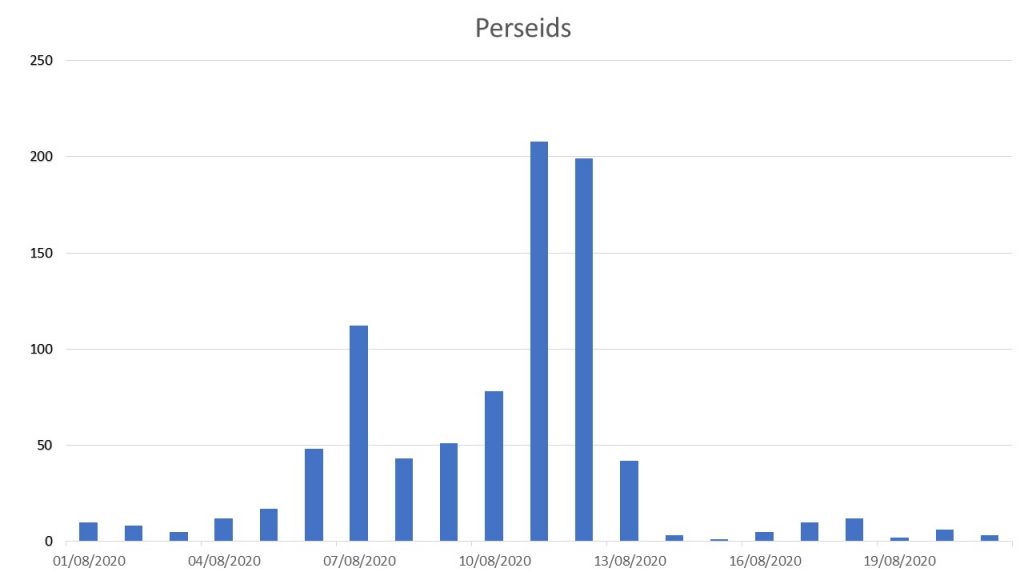 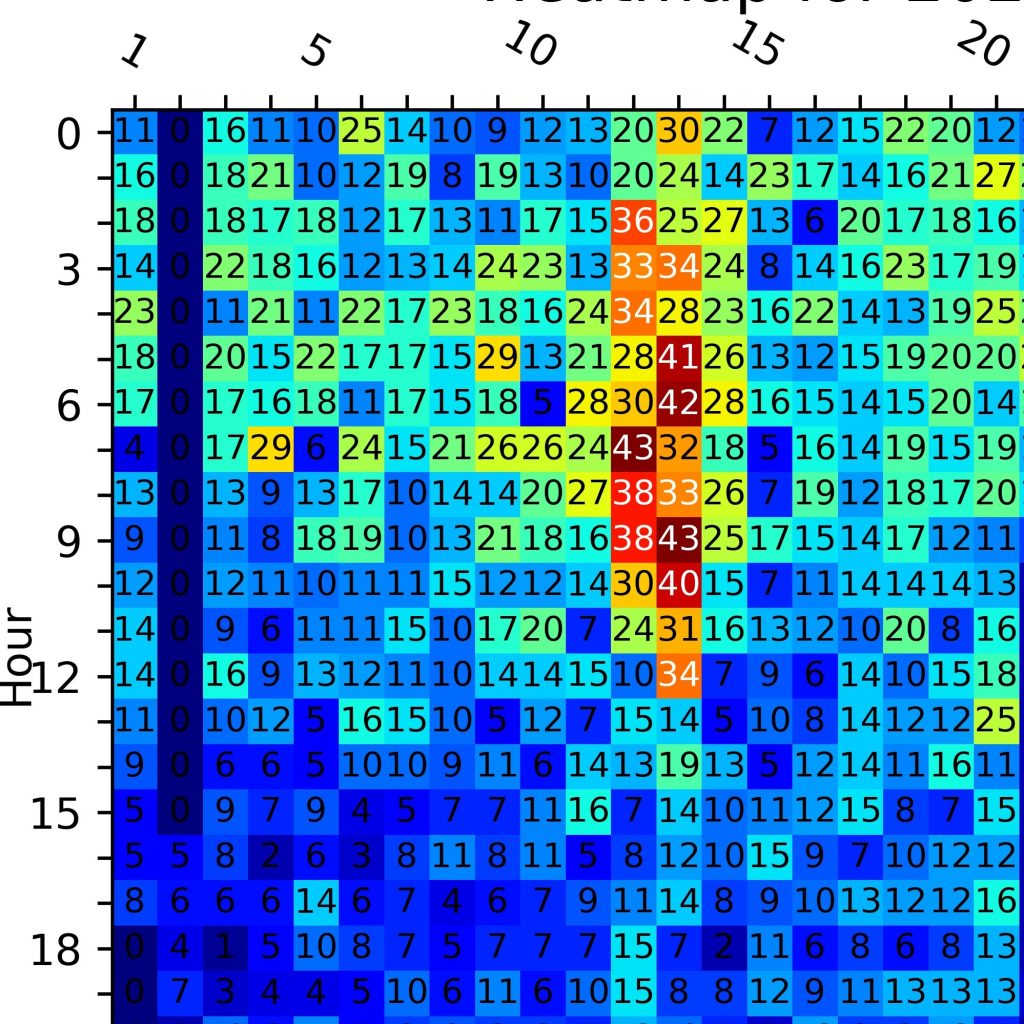 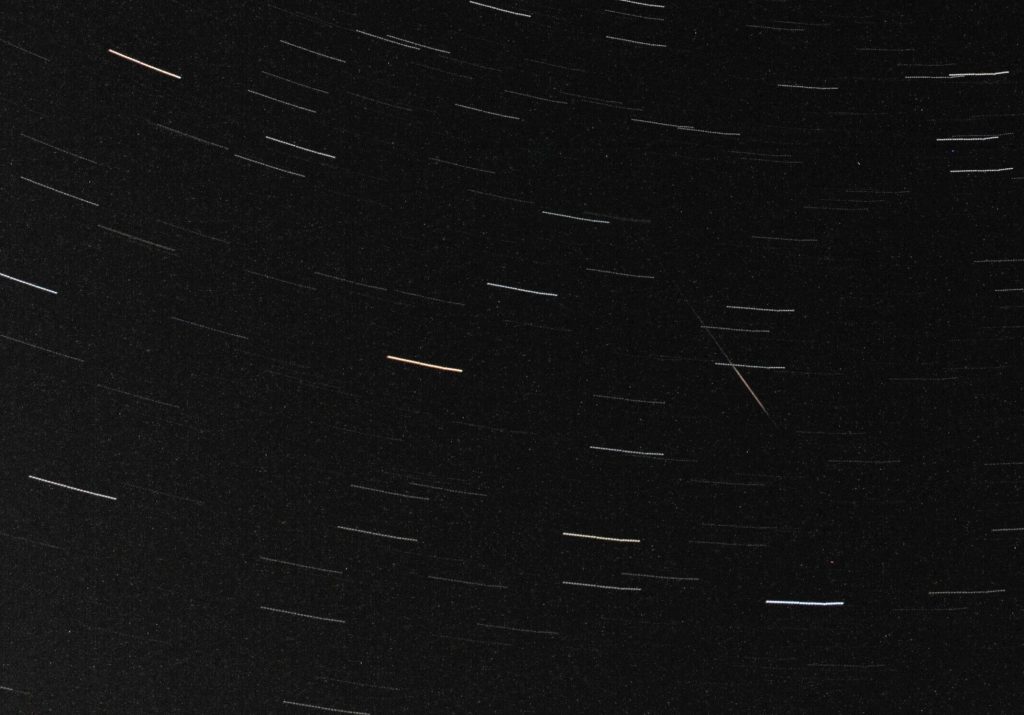 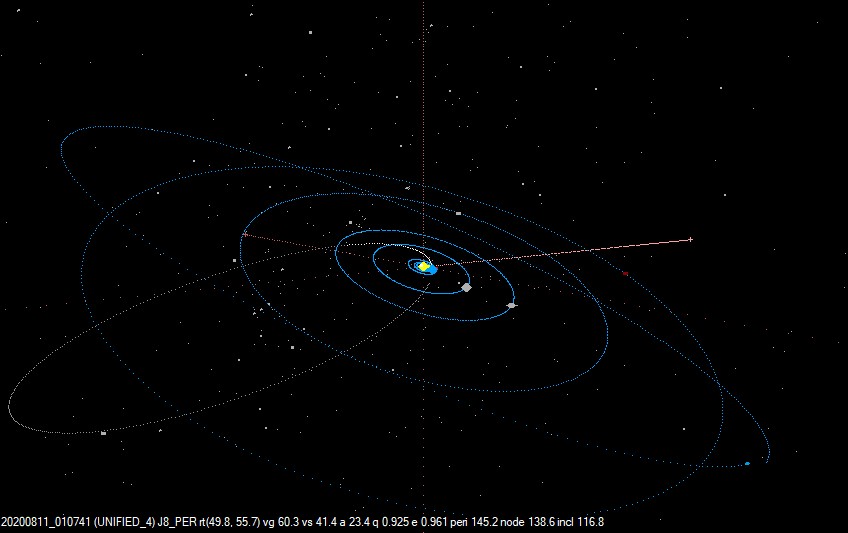 Video observers did also capture a few Perseid fireballs. One, picked up by my own camera at 01:07 UT on 11th Aug had an apparent magnitude of about -4.2 and was also detected by several other observers allowing its orbit to be calculated. This suggests that It came from the far outer reaches of the solar system. The meteoroid’s orbit is the ellipse on the left of fig 4 and is inclined at nearly 90 degrees to the ecliptic.

In my Meteor Outlook for September I mentioned that the Daytime Sextantids peak in late September although the precise time is unknown. These are hard to detect visually, but they can show up well on radio detectors. Phil Hayward had a go and picked up a possible peak around 4am on the 27th September. My own radio data shows similar activity. Phil also had a go at both the Perseids and the Aurigids with similar success. Well done to Phil!

There are now several members trying their hand at radio detections across the UK and further afield (I’ve had emails from as far away as Mexico, Sweden and Australia!). If you’re interested in trying it yourself, there’s an article on the website.

On 19th August a meteorite fall was recorded in Brazil, fragments of which punched through a roof and landed on someone’s bed. Fortunately, they were not in at the time!  And on 3rd September, a bright fireball was reported over Spain at 00:35 UT. It was classified as a sporadic on an asteroidal orbit. 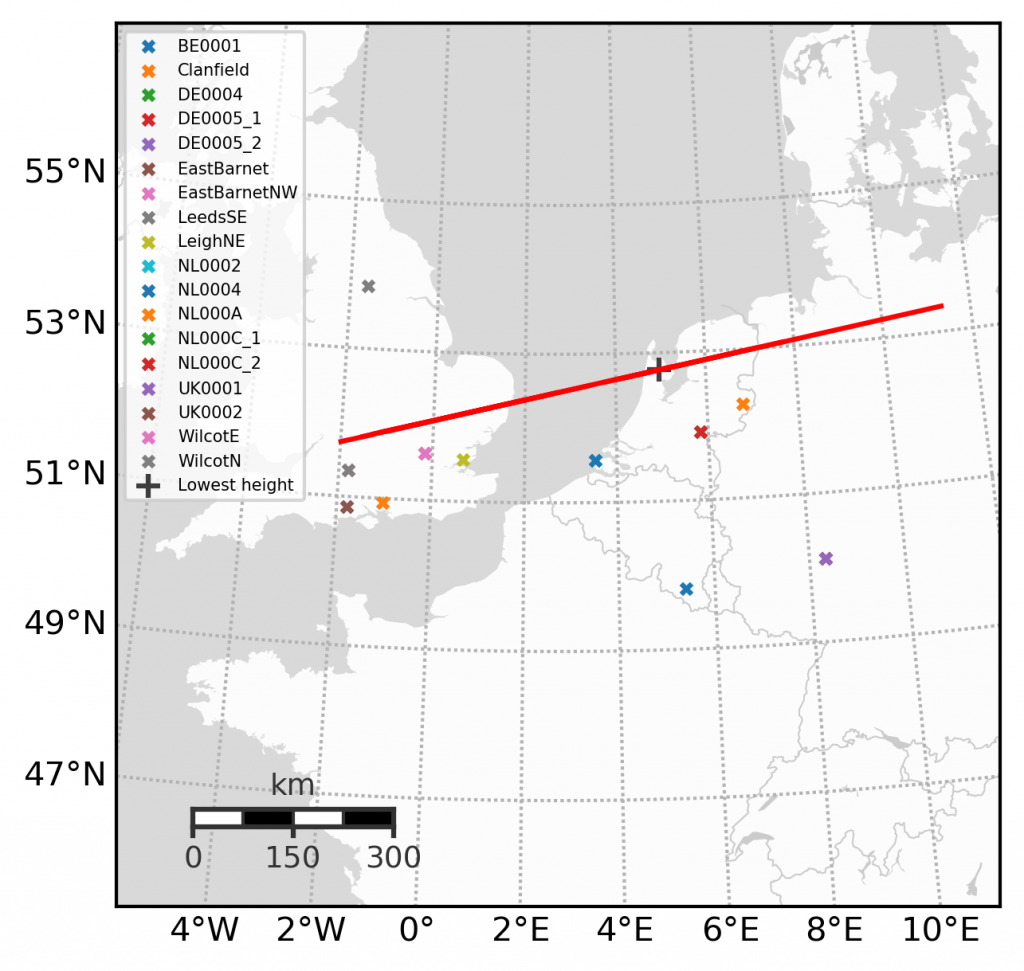 Lastly, a fascinating earthgrazer meteor was picked up on multiple systems across Europe on 22nd September. Earthgrazers are meteors that are travelling too fast to be captured by the Earth’s gravity or whose orbit just misses the planet. They graze the upper atmosphere and continue on their way, and because of their altitude and path, they can appear to be quite slow moving. This one was tracked from Germany to the UK over the course of many seconds (see fig 5), and never dipped below about 90km altitude. Despite seeming to move slowly, it was estimated to actually be travelling at more than 100,000 km/h !

No major showers take place between mid January and the Lyrids in late April. The Lyrids were a bit of a damp squib this year. On twitter, Bill Ward (@meteorbill) described them as “singularly underwhelming” which sums it up. SPA member Tom Banks recorded nine over a four hour period while Tony Titchener reported one lone Lyrid and three flashes in a twenty minute period. Mary McIntyre picked up one mag -2.7 meteor out of 3,000 photos (see picture). My cameras picked up about thirty over three nights. Even the radio detector only registered about ten or fifteen meteors per hour above the background level.  We all probably saw more Starlink satellites than meteors!

Outside of the regular showers there was a spectacular daytime meteor over Croatia on the 28th of February which generated a lot of excitement and analysis but unfortunately it was out of range of SPA members. There’s more about this in the News feed of the meteor section website.

Members also reported several sightings of possible fireballs.  Julian Ramestones reported a fireball over Cornwall on the night of 21st April which may have been a Lyrid, Richard Lewis reported a possible fireball in the early evening of 9th April and Ernie Armstrong reported an event via the website on the evening of 15th April and Michal Kulas on the 12th March.  There were also two reports of the same event on 30th May, from Glenville Skyrme and Mark Grabham. Unfortunately, we don’t have any photos of these events.

Finally following on from last month’s article about radio detectors, several members have now contacted me to say they’re building sets. This is really exciting! The furthest afield is Jarek in Sweden, but nearer to home Alan from Hertford AG, Mark Charles, Dave Mowbray, Pat Duggan and Phil Hayward have all contacted me.  If you do give it a go, please keep me posted about your progress, of you need help or advice. 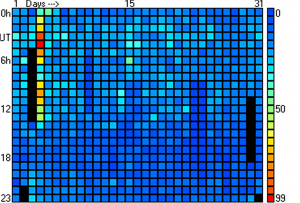 The Quadrantids have a very sharp peak centred around the night of Jan 3/4.  This can be seen very clearly with radio observation data which shows enhanced activity at 04:00UT on the morning of the 4th, but nothing in the days either side. 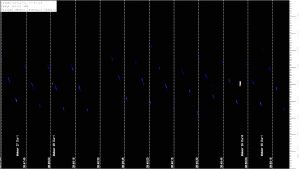 Lastly no astronomy note can finish without mentioning Starlink. We still don’t know the final impact these constellations of thousands of satellites will have, but we do know they’re affecting our observations already. The image below shows a constellation passing over northern France and being picked up on my meteor detector, some as false meteors. I have indeed noticed frequent ‘outbursts’ on the radio now which turn out to be Starlink creating noise and false data. Lets hope this isn’t the shape of things to come.