Two of the year’s best showers occur in midwinter – the Geminids in December and the Quadrantids in January. 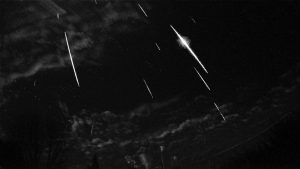 The Geminids have a fairly broad peak extending over a few days either side of the maximum on Dec 14. This year was no exception, with my own cameras picking up around 100 Geminids over the period from Dec 12 to Dec 15. The image here shows a composite of a few of these over the Cotswolds. 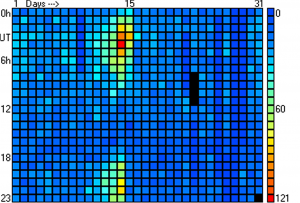 The Geminids also produced quite a bit of radio data both in the early morning and surprisingly in the early evening. The graphic below shows how activity builds up over a few days then drops off sharply by the 16th.

The other shower of note during this period is the Ursids which peak around Dec 22/23. SPA Member Tom Banks braved the elements to spot two Ursids and five sporadics over a two hour period. I only picked up seven Ursids over a two day period so Tom did pretty well.  An extract from his report is shown here.

[ unfortunately this section is not currently available online ]

The Perseids this year coincided with a nearly full Moon and hopes of a good display were low. In the event southern UK observers were also met with hurricane-force winds, torrential rain and power cuts!  Mary and I were at the Solarsphere festival in mid-Wales where we were more concerned about our tent blowing away in 50mph winds than with star gazing!  Meanwhile back at home the power cuts which affected much of the South East of England also shut down our meteor cameras.

The actual peak fortunately was a few days later on 13th/14th and although cloud still intervened many observers did pick up quite a few Perseids. Our own cameras picked up 55 on the night of 13th and about 120 over the peak period (see Figure 1).  This is about half as many as we picked up in 2018 but cloud and moonlight will have impacted visibility. 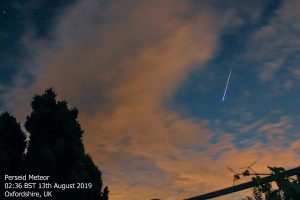 Perseids were also captured on camera by Mary McIntyre who had two digital cameras on tripods running all night on the 13th and picked up the colourful image in Figure 2, and by Paul Sutherland who took a lovely picture looking out over the sea (Figure 3).  Both images show green and orange colour in the trails of the meteors which is quite common with Perseids. 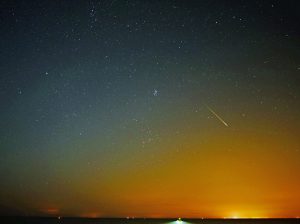 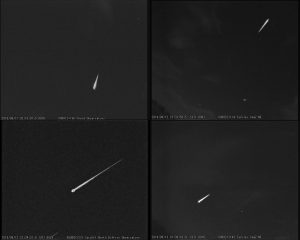 The UK Meteor Networks UKMON and NEMETODE, of which I am a member, also captured a number of Perseids. Figure 4 shows images from UKMON. Clockwise from top left are images from Chard, Oxfordshire (two images) and Cardiff.

Meteors are more common than most people think. In fact, in a typical night between April and December you might expect to see twenty to thirty meteors per night – if you had eyes in the back of your head to look at the whole sky at once and were perfectly dark-adapted! Of course, we’re not, so we use cameras nowadays for detailed observation.  This allows us to capture much more data and Figure 5 shows the number of meteors captured by my two cameras over August and September 2019. Between them these cameras cover about half the sky.

The variation from day to day is mostly weather-related though moonlight also plays a part.  Figure 6 shows the count by shower ID showing just how many sporadic meteors we get – nearly as many as there were Perseids. Sporadics are meteors that don’t belong to any known shower and are created by random space dust hitting the atmosphere. Named showers are mostly due to cometary or asteroid debris (for example the Perseids are caused by Comet 109P/Swift-Tuttle) 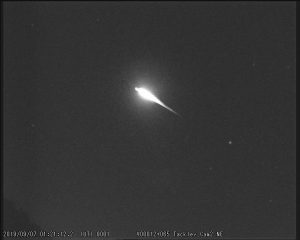 Aside from the Perseids there was some excitement in early September when police rescue helicopters were scrambled to a “plane crash” over the English Channel. Luckily it was quickly identified as a slow-moving meteor which had burned up or fallen into the Atlantic.  The meteor was picked up from across Northern Europe, allowing quite detailed analysis of its path (there’s more on this story on our website in the Meteor News section).

My own cameras also picked up thirteen fireballs over the two month period. A fireball is any meteor with a magnitude of -4.0 or larger. Figure 7 shows one nice example seen through thin cloud. 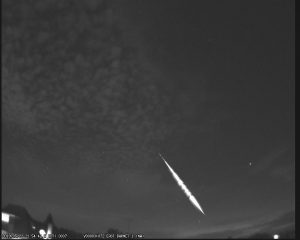 As seasoned meteor hunters will know the first half of the year is poor fare: after the Quadrantids in January, there’s little to get you outside except the Lyrids in April.

The Quadrantids were relatively quiet this year. My own cameras picked up about 80 over three or four nights, but the cameras have a wide field of view and can pick up faint objects which your eyes would miss and only two that I detected were brighter than mag -1.  The Lyrids were hampered by the full moon, with my own cameras only picking up fifteen! There were also no fireballs reported to SPA or to UKMON from either shower.

Outside the showers, several sporadic fireballs were reported. On 15th February a bright fireball was picked up over Belgium by multiple observers including a number in the UK and on 30th March there was another spectacular fireball, this time over the UK. This event was picked up by ten of the UKMON automated cameras, including my own which captured a short video that you can watch on the SPA website in the Meteor News section (https://tinyurl.com/yygvelh5). 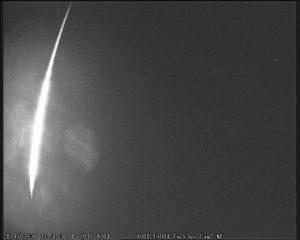 This meteor is also an example of how cooperation between observers can do real science: by combining observations from multiple locations across the UK, it is possible to determine the exact path and velocity of the meteor as it enters Earth’s atmosphere. This in turn allows us to work out its orbit before it encountered us, and from that we can often work out where it came from. We can also estimate its weight and size. In this case the meteor is estimated to have been about 190-330g and about 36-60mm in diameter, and its orbit has been plotted confirming that it was a sporadic.

Also in March, NASA reported that military satellites had picked up the trail of a large meteoroid entering the atmosphere over the Barents Sea last December.  Scientists estimate it was several metres in diameter and delivered the equivalent of 170 kilotonnes of TNT’s worth of energy.  It wasn’t reported for months because of military secrecy. There’s a great video of this linked in the Meteor News section of the SPA website. 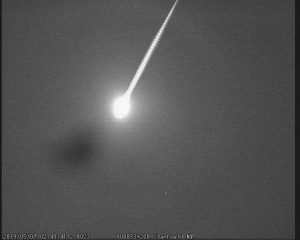 Back in the UK, on 7th May Steve Bosley reported a Mag -5.2 fireball heading northwest. This meteor was picked up by a couple of other observers around the UK. Later in the month, on the 22nd, another bright fireball was reported by Jim Rowe in the southern UK. Analysis showed this meteor was passing over North Wales. Lastly, on 1st June observers across the UK and Europe including myself spotted another sporadic fireball which was bright enough to shine through the clouds covering the UK. It was estimated to be around mag -5.5.

May was also a landmark for video detection of meteors for the UK’s two main networks UKMON and NEMETODE who passed half a million detections between them in the seven years since their launches. These networks go from strength to strength and now cover most of the UK with over 100 cameras between them. There’s more about video meteor detection on the SPA website.

And finally In May I was contacted by someone who worked in outreach at an observatory near Perth, Australia, and was keen to find out more about radio detection of meteors. This sounded like (expensive!) wizardry but it is actually pretty simple and surprisingly cheap. As meteors pass through the atmosphere their ionisation trail acts as a reflector to radio waves in the FM radio and UHF TV bands and so with equipment you can buy on the internet for under £20 – and a bit of DIY – it is possible to pick up these reflections and turn them into an image on your PC. Radio astronomy works through clouds, in daylight or in rain so it is an all-weather, all day way of picking up meteors. I’ve now started building my own rig so hopefully I will be able to report success in a future issue of Popular Astronomy.