The June Boötids are an unpredictable source.

The shower is associated with Comet 7P/Pons-Winnecke. This last passed through perihelion on 2015 January 30. However, whereas enhanced activity from other meteor showers has been most likely to occur when their parent comet is near perihelion, there seems to have been no such correlation regarding previous outbursts of the June Boötids.

Moonlight will not affect observations in 2019. A more significant issue will of course be Britain’s short, twilit midsummer nights – although even casual observers here easily spotted the 1998 return.

No visual activity has been seen in recent years, though recent IMO video results have indicated very weak rates may happen annually from the shower, on or around June 24, so it is worth keeping watch then just in case, and also around the 1998 peak’s repeat time, on June 27. The June 24 video June Boötids were radiating from an area about 10° south of the expected one, however.

June Boötids are typically very slow meteors – a factor which helps distinguish them from sporadic meteors which might by chance line up with the radiant.

The chart below shows the radiant location as reported in 1998: 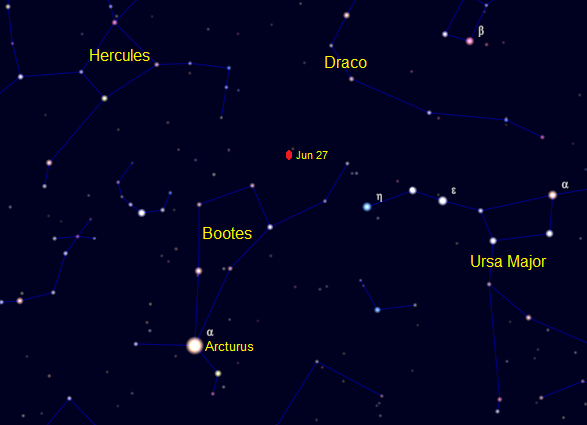