We expected 2000 to be a difficult year, since many favourite major shower maxima were going to suffer from bright moonlight during it, and the lower visual observing hours total than in 1999 reflects this especially. It was typical this should happen in a year which the SPA Cloudwatch project (now run by Terry Holmes) recorded its best tally of clearer nights across the country for nearly 20 years! The visual meteor numbers naturally suffered too thanks to there being no Leonid storm, which had so massively boosted our totals in 1999. Even the radio observers endured one of the worst years for interference in a long time, including Sporadic-E in May-August and aurorae at a few most inconvenient times (including on August 12!). However, the year will be more positively remembered for its unusual crop of sometimes widely-seen fireballs, a splendid run of clearer nights right across the Perseids in July-August, the strong Leonid showing in November, and of course, the interesting observing circumstances the Moon so often created.

The overall totals for the various observing techniques were: Visual – 746.4 hours, 10,535 meteors; Photographic – 875.6 hours, but sadly no trails reported; Radio – 59,979.4 hours; Video – 2279.7 hours, 11,429 trails. The visual, photographic and video tallies were particularly added to by data from the German Arbeitskreis Meteore (AKM) observers, details of which were taken from the AKM’s monthly journal Meteoros provided by Ina Rendtel. Especially active AKM observers included Frank Enzlein, Sven Naether, Juergen Rendtel, Roland Winkler and Oliver Wusk (with between 40-135 hours of visual observing each for the year). Most of the radio data came from the Radio Meteor Observation Bulletins (RMOBs), which Chris Steyaert in Belgium submitted. Reports, ideas, suggestions and comments have come from other observing and non-observing Section correspondents too, which have all helped to complete the picture of meteor activity during the year as presented in the regular SPA News Circular columns and SPA Electronic News Bulletins, our results articles published in the International Meteor Organization’s (IMO’s) bimonthly journal WGN, our Website reports, three of which are supplementary to this Review (including those on the January 9 bolide, the Perseids and the Leonids), and this Review itself. All contributions are again most gratefully acknowledged.

The list of people providing observational data at times outside those covered by the supplementary reports, excluding those who only provided casual fireball details, follows. All are to be congratulated and thanked for their time and trouble in observing and submitting their data, without which the Section could not continue to function. The listing contains the country most observations were made from, with abbreviations indicating the type of observing carried out. “P” denotes photographic, “R” radio, “Vi” video, and “V” that visual results were also contributed by that person. Observers without an additional letter provided purely visual data:

The leading UK visual observers managed between 30-65 hours of watching each during the year, more than in 1999, but comparable to the totals in 1998. Elsewhere, and aside from the AKM observers mentioned earlier, few watchers managed much more than 20 hours. The overall impression from observers was that they enjoyed what meteoric events they were able to follow, even when the Moon was strong, which impression was a particular bonus in such a difficult year. Four radio operators covered 250+ days during the year, with four more amassing over 200 days’ worth of data.

Highlights of the Year 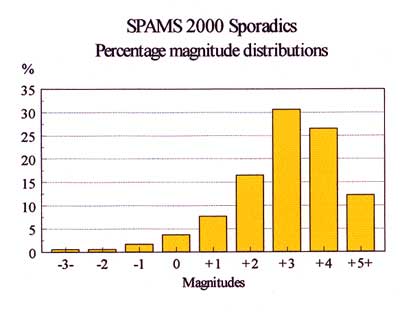 Some comparison monthly sporadic data for the better-observed showers of the year has been given in this Review as normal, and in the separate Perseid and Leonid Reports, because the sporadics form an essential calibration for all other meteor activities. Although they can be routinely monitored along with the main showers, it is important we have as much coverage of the sporadic complex during the rest of the year as we can too. This additionally allows coverage of the minor showers, of which at least one or two are active on nearly every night of the year. The magnitude distribution graph given here is based on details from 1190 sporadics seen in better skies (limiting magnitude +5.5 or better, cloud cover < 20%) during 2000. From these a corrected mean magnitude of +3.6 has been derived, with a train population of 3%.

As should be obvious, numerous fireball reports were a notable aspect throughout the year. The fascinating distribution of several apparent “clusters” of these sporadic fireballs should not distract us from the fact that fireballs are typically commoner during the major shower maxima however, and even when many such shower peaks were affected by moonlight in 2000, the most productive fireball nights and sources were still January 3-4 (Quadrantids), August 11-12 (Perseids), November 16-17 and 17-18 (Leonids) and December 13-14 (Geminids). Aside from the fireballs already listed, another 30 reports of meteors of magnitude -3 or brighter were received by the Section during the year, 20 of those on the five shower nights mentioned just above. Advice on what to record on seeing a fireball and other information on them can be found on the Fireball Observing page of this Website.

A selection of interesting meteoric texts published since our last Annual Review, not already mentioned.

For further information on the IMO, see the Website at: http://www.imo.net. Anyone seriously interested in meteors or meteor astronomy should consider becoming an IMO member. An application form can be found on the IMO Website, or contact the SPAMS Director. The cost to join in 2001 remains the same as in 1995, 16 GBP (which includes a 2 GBP administrative fee payable only in your first year of membership).

Just room left to thank everyone again who contributed to the Section in 2000, and to wish you all a most successful year’s observing in 2001, when many major showers are less troubled by the bright Moon. I look forward to hearing of your efforts and seeing your reports. Good luck, and as always, clear skies!