There has been some confusion in recent years regarding the activity period of this minor shower, if indeed it exists! The IMO no longer list it in fact.

Originally, it was assigned a peak date of December 8th. There was, however, a later claim of a second peak from a similar radiant position on Dec 30th and to complicate things further, some software programs used in conjunction with video imaging systems have been assigning many (single-station observed) meteors in early January to this minor shower.

Two factors are probably responsible, at least in part, for this apparent later activity.

– one is that the software programs assign the shower a large radiant diameter of  9 degrees.

– the other is that located nearby is the radiant of the Quadrantid meteor shower – this is active from late December to mid-January and produces meteors with a similar speed.

Multi-station analyses, when possible, tend to re-assign most of these later single-station “December Alpha Draconids” to the Quadrantids. 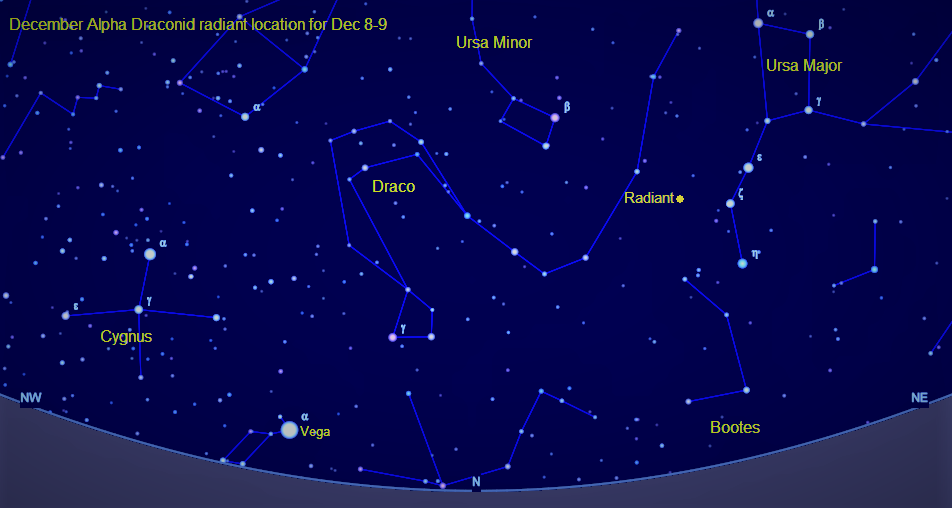 This accompanying chart shows the radiant location for the established peak of Dec 8-9, with the horizon shown as for the middle of the night for UK based observers.

There will be no interference from moonlight in 2018, with new Moon on the date of peak activity.