The first shower of the year, the Quadrantids (QUA), is usually a pretty good one. The peak this year is on 3rd/4th January. Thewaxing gibbous Moon will set around 1am, so the best time will be in the hours before dawn. Wrap up warm though!

The published hourly rate is 120 for the Quadrantids but this assumes the radiant is directly over above you, there is no moonlight, and you can see in all directions at once.  In fact the radiant will be between 30 and 50 degrees up during the hours between moonset and dawn, and so you might expect to see 10-20 per hour around moonset, perhaps more later. 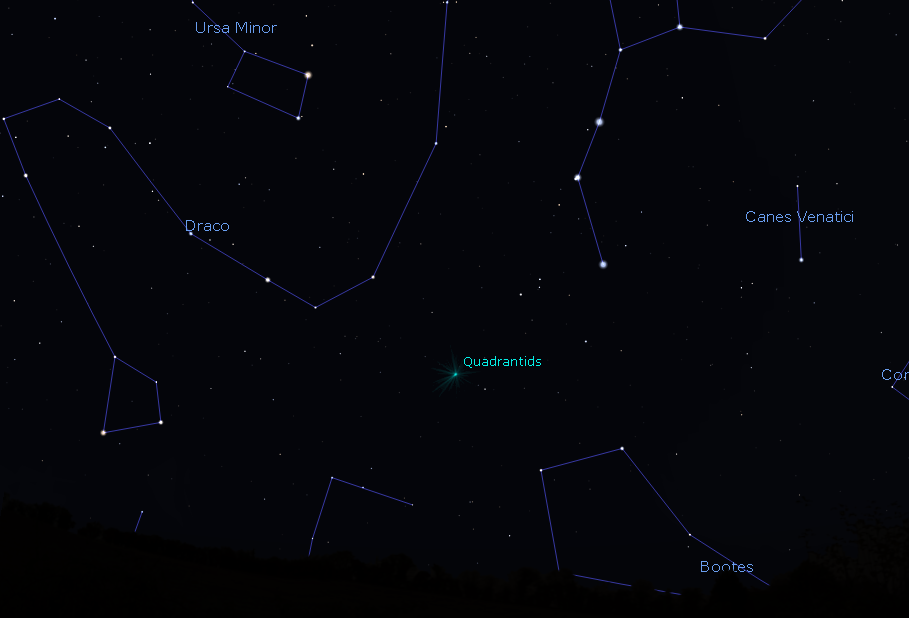 After the Quadrantids its quiet in the meteor calendar until April. The only shower visible from the Northern Hemisphere is the γ-Ursae Minorids (GUM) on the 10th of Jan with an hourly rate of three, though the December Leonis Minorids (DLM) do run on until February. There are two faint showers, the α-Centaurids (ACE) and γ-Normids (GNO) visible from the Southern Hemisphere but these also have very low rates.

The Anthelion Source is also most easily observed at this time of year. This is a large patch of sky containing a number of weak ill-defined showers.  The centre of the anthelion source starts the year in Gemini and moves into Leo during February. Hourly rates of two to three can be expected from this area of sky about thirty by fifteen degrees.

These faint showers are often best detected using radio or video observation techniques. There’s more on both these techniques on our website.