A bright daytime fireball was seen over northern Germany on the 12th of September. The meteor was picked up on several cameras and even on a kite-surfer’s GoPro video of himself. Check out the still below and then watch the video available via eMeteorNews (link below, watch from about 1:00 in unless you are keen kite-surfer…). Its also in the traffic-cam video on the site, though blink and you’ll miss it (its low above the horizon on the right side about 4 seconds in).

Analysis suggests it had a velocity of about 18 km/s when it hit the atmosphere, and dispersed about half a kilotonne of energy.  There’s no report of whether it was associated with any particular shower, but its direction makes it a possible September Perseid (SPE). 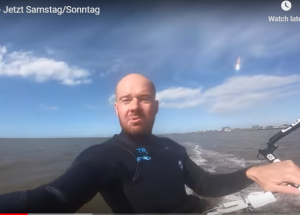 The eMeteorNews article can be found here

One thought on “Daytime Fireball over Germany on 12th Sept 2019”