At 5:51 on the morning of Sunday 8th September a very bright, slow meteor was spotted from southern England and France. 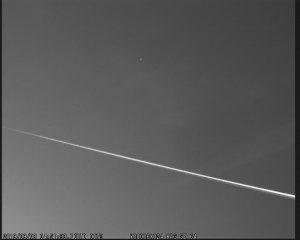 Or a plane crash, as it was initially reported – it caused quite a stir in both the press and on social media. It was caught on camera by SCAMP in Honiton (part of the FRIPON network) and by several UKMON and BOAM cameras in England and France respectively.

This image was taken from Hampshire by Steve Bosley of UKMON. 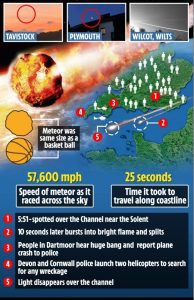 Most newspaper websites picked the story up promptly, with the notable exception of the Daily Star, which therefore missed an opportunity to use the words “UFO” and “Alien” in a meteor report.  Full marks go to “The Sun” for its infographic which is pretty close to being right. Less full marks to the BBC for their lead image below, which seems to be a contrail left by the plane that the meteor wasn’t. Oops. Thanks also go to Richard Kacerek of UKMON who helped the press get the story right. 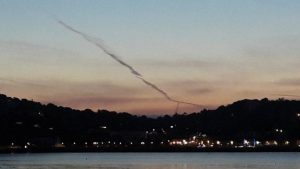 As mentioned earlier, the meteor was initially misreported by the public as a potential plane crash, leading to police helicopters being scrambled to search for survivors. Fortunately this misunderstanding was soon cleared up.

So what actually happened? 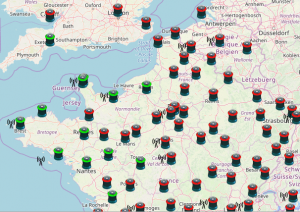 A meteor entered our atmosphere with a very shallow trajectory and left a long trail. It took as much as 30 seconds to cross the sky – meteors normally burn up much more quickly because they come in more steeply.  The meteor was caught by twelve FRIPON cameras in France and the SCAMP camera in Honiton, Devon. These are shown in shown in green on the map to the left. 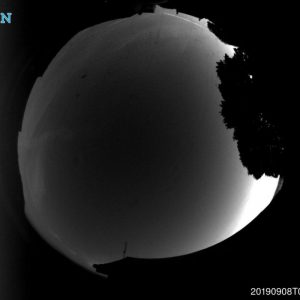 From the UK it appeared very low in the south but was seen by many members of the public. Here’s a composite image of the meteor from the Honiton SCAMP camera. It’s the white streak at the top right of the image – very distant, and so very low on the horizon. 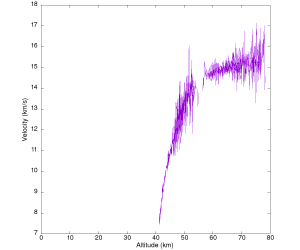 Firstly FRIPON was able to calculate the meteor’s velocity curve. When first visible the object was almost 80km up and travelling around 15-16 km/s. About 28 seconds later it was 40km up and had slowed to about 7-8 km/s, but in that time had travelled around 380km across the Noth Sea, France and the Atlantic. It seems to have been on a very shallow trajectory, but too slow to escape Earth’s gravity and escape back into space. 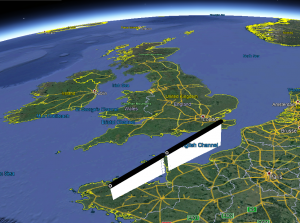 FRIPON also calculated the trajectory, shown here as the black line. The ground track (the imaginary line on the ground exactly below the meteor) is the line at the bottom of the wedge. The Sun picked up a version of this image but then reported that the meteor crossed England’s south coast, which is incorrect.  In fact if it didn’t burn up entirely, then the meteor landed somewhere in the Atlantic.

Other data from UKMON suggests that the meteor was at least magnitude -4 and was a sporadic, meaning that it wasn’t part of any known meteor shower. 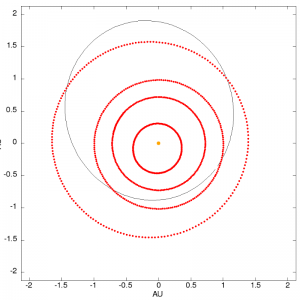 And finally here’s where FRIPON think it came from. The orbits of Mercury, Venus, Earth and Mars are shown as red rings (Mars is the dotted one) and the object’s orbit is the black ellipse. It seems to have been a chunk of asteroid that orbited mainly between Earth’s orbit and that of Mars, but crossed the orbits of both. This time, it didn’t make it past the Earth.

Of course, this is just the sort of rock that we’d love to recover for the Natural History Museum. But sadly this one, like the last few, is somewhere at the bottom of the Atlantic – safe in Davy Jones’s locker!

Hopefully next time we’ll have one land on land…

SCAMP (the System for Capture of Asteroid and Meteorite Paths) is a network of all-sky cameras based in the UK.  SCAMP detects and records bright fireballs so that the location of any resulting meteorite fall can be estimated.  Any meteorites recovered using SCAMP will be donated to UK museums or universities, along with all images and data recorded.

For more information on SCAMP see www.scamp.org.uk.  To receive alerts from SCAMP you can sign up here.

SCAMP is fully integrated with the French FRIPON network of about 100 cameras.  For more information on FRIPON see www.fripon.org. For a daily e-mail summary of all FRIPON multi-station fireball captures (including SCAMP captures), click here to subscribe or send an email to newsletter-request@fripon.org with “Subscribe” as the subject.