The UK’s meteor detection networks have now passed half a million detections!

The earliest observations in the database were made by William from Ravensmoor, Cheshire in October 2010 and subsequently, the first match recorded was between two NEMETODE cameras on 14th April 2012 at 22:30:20 between William’s camera and Alex’s camera at Leeds, Yorkshire.

The first inter-network observation was of a Perseid on 9th August 2012 at 21:49:02 UTC, although the match wasn’t recognised at the time.  For the record, it was made by Alex’s NEMETODE camera in Leeds, and Peter’s UKMON camera in Church Crookham, Hampshire : 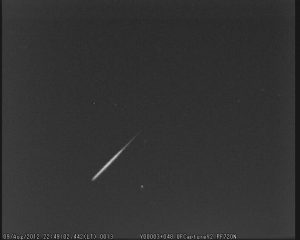 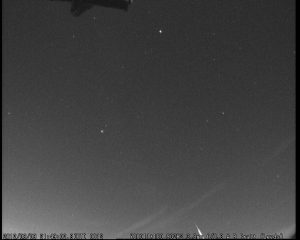 Wind the clock forward to April 2019 and together, those two networks have just posted their 500,000th observation. To be fair, observers in Eire and Northern France have contributed significantly to this haul, but I think we can let that  complication pass and celebrate the achievement. Also, I should admit that my scripts had missed a couple of sets of early data and so it is fair to say that by the end of April we had smashed it with a whopping 545,737 observations!

The following radiant map (colour coded by arrival velocity) shows there have been meteors from all across the northern skies, and over all but the extremities of the British Isles in the equivalent ground map: 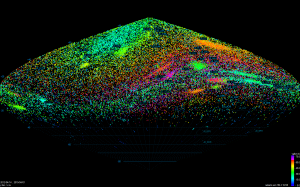 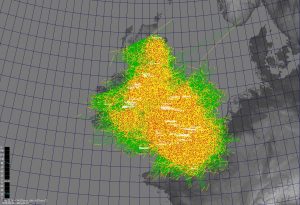 Individual stations have come and gone, cameras have been added, moved, removed, and/or upgraded but the undeniable fact is that the two networks are now delivering almost complete coverage of the UK skies, maximising the number of captures achieved. In fact there have been contributions from at least 123 individual camera installations. This data is used by amateurs such as myself to analyse the orbits of the parent meteoroids but, more significantly, it is  shared with the Europe wide network, EDMONd, to enable a much less weather dependent analysis (it can be frustrating when strong shower activity is anticipated, but the whole of the UK is clouded out!)

At Clanfield, we were an early participant in the UKMON network – indeed, we made the first UKMON pairing between our North camera and Peter’s Church Crookham camera on 5th September  2012 at 01:35:44 UTC.

Very early on I realised the opportunity afforded by membership of both networks. Whilst they began with a distinct north/south focus, as they grew the overlap quickly became more and more significant.

There were early concerns that we would be mixing higher and lower definition captures which might affect the quality of combined results, but I wasn’t so sure and so HAG decided to buy a Watec camera and join NEMETODE too – the original UKMON cameras were selected to be affordable and used cameras with 1/3rd inch chips, whereas the NEMETODE Watec cameras were significantly more expensive but used ½ inch chips, so offering better resolution. NB.  eBay has since reduced that price differential.

Worst case scenario, we would share Watec data with NEMETODE only and the data from the other two cameras, with UKMON only. But from day one we have shared data from all cameras with both networks, to the benefit of both.

Having access to the data from both networks has meant that we have had to respect the ownership of  the data mined from each network, and over the years I have developed scripts to enable me to analyse each network’s data separately. However, bringing the data together into a single UK wide dataset allows me to take advantage of the very significant overlap that the two networks now enjoy. The science behind the capture of these videos is down to statistics, and the quality of the analysis is directly proportional to the number of observations of each and every event. More and more observers are joining both networks and I can only see this trend increasing.

What of the quality of the data ? Qualitatively, there is no difference. When I chart the count of observations which meet the most stringent quality threshold (Q3 in the Sonotaco UFO Orbit software parlance) it is impossible to spot which data is captured by NEMETODE stations and which by UKMON stations (the Q3 counts are normalised by considering their ratio to the total observations (at Q1)  for each camera:

In truth, this chart hides the fact that some cameras may be more preferentially aligned with others and so it would be interesting to repeat the analysis for all pairs of stations, but it is clear that there is no technology divide, and so I am happy that all UK observations are equally valid.

Over those seven years, every so often, we have captured some pretty spectacular fireballs – the highlight having to be the St Patrick’s Day fireball from 2016. This made the national press and because it was captured by  several captures, we were able to get some detailed analysis done by our friend Jakub Koukal of EDMONd who determined its mass (50+/-16kg) and orbit (stretching beyond Jupiter, so no residual meteorite expected): 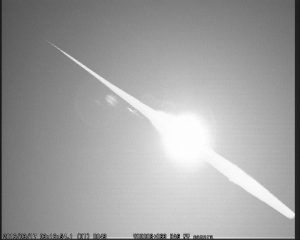 Before closing, it should be recognised that these were not the first attempts. There were other “early pioneers”  active across the British Isles from the 1970s, and in the 1990s Andrew Elliott pioneered amateur video meteor astronomy triangulating with Steve Evans, Tim Haymes et al. And in the late 1990s Alex ran a camera matching with Len Entwisle.

Also, there are other ongoing collaborations between Robert Cobain and Armagh Observatory that pre-dates UKMON & NEMETODE by some years.

We certainly won’t have to wait seven years before we can celebrate the one millionth meteor observation over the British Isles. News of the science that can be extracted from such simple capture systems is spreading. New members are joining each network all the time – including some significant players  such as the Natural History Museum and at least one secondary school (this is a great tool for promoting STEM subjects). The technology is changing too – several keen “techies” are experimenting with more sensitive cameras and Raspberry Pi systems to see if they have the resilience of the proven systems in operation today.

I’m not a huge fan of social media, but I can’t help being impressed by the way that UKMON engage the public with their twitter feed and live feed from cameras. Scientifically, I think we still have some way to go – dark flight calculations are complex and there haven’t been any killer papers published yet, but the dozen or so that have been published, by both networks, have set the bar. With other professional and amateur groups (such as Jim Rowe’s SCAMP network) deploying  all sky cameras, the game is on to identify a fireball that survives the earth’s atmosphere so that the surviving meteorite can be recovered for analysis. Hence the interest of the Natural History Museum (amongst others).

Will a meteorite fall be retrieved in the UK before we get to one million observations ? Almost certainly!