Moonlight circumstances were very favourable for the 2017 Geminids, but would the December weather be cooperative?

Bill Ward reported that he was taking no chances and was setting out for Tenerife with his cameras. Hopefully he will return with lots of nice meteor images.

The Geminid radiant would be above the horizon all night from the UK, with observed rates each night likely to be highest at around 2am

Skies were clear over much of the UK, but with snow on the ground in many areas, coupled with a northerly wind, it was for many the coldest night of the year.

Some hardy observers did brave the conditions to make use of the clear skies.

Tom Banks (Comberbatch, Cheshire) put in an outstanding effort, carrying out three meteor watches that amounted to 7 hours in total.  During the first session between 22:16 and 00:16UT, he saw 20 Geminids and 6 sporadics (LM 5.1). The second session between 01:31 and 04:31 UT yielded 14 Geminids and 10 sporadics (LM 5.3), while the final hour-long session between 04:45 and 05:45 UT produced 3 Geminids and 2 sporadics (LM 4.8).  Tom’s brightest meteor was a mag -3 Geminid  seen in Lynx at 05:07 UT. He also recorded a fast-moving blue-tinged mag -2 meteor at 00:51 UT but although, this appeared to come from the general direction of Gemini, he couldn’t definitely trace it to te radiant and so recorded it as a sporadic.  An amazing effort by Tom, who added “I now have a face like a polar explorer from the exposure (-6 degrees) and a perpetual yawn, but it was worth it for seven hours’ worth of records”

Jeff Stevens (Stoke-on-Trent) reported spending an hour, starting at 22:33 UT, lying on his garden bench looking for Geminids (LM ~3.5).  He recorded five, including two simultaneous ones at 22:53UT.  Jedff added that hs coat had frozen to the bench when he came to get up at the end!

David Scanlan (Romsey, Hants) reported observing for an hour between 18:30 and 19:30 UT (LM 4.5) and seeing one Zeta Aurigid and 1 sporadic, but no Geminids.

Many parts of the UK endured overcast skies, with further snowfall in some areas. However, some observers found the weather to be better than expected and  were able to make use of short-lived breaks. In such conditions, it is usually possible for some observers to monitor the meteor activity via radio methods using forward scatter from the GRAVES radar system in France. However, this was not to be as William Stewart reported his disappointment that GRAVES went offline at 20:09 GMT. 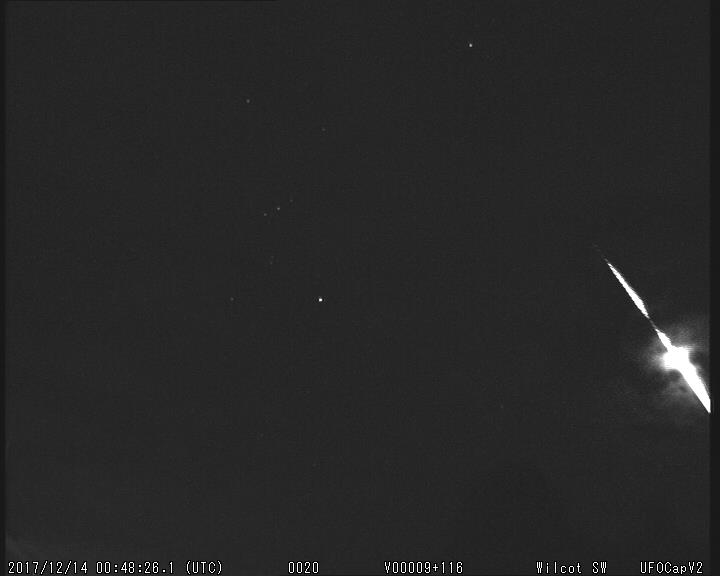 Richard Fleet (Wilcot, Hants) observed visually and reported seeing 33 Geminids and 9 other meteors during a clear spell between 11pm and midnight.

Shortly after ending his visual observations, due to a veil of thin cloud spreading across, his SW facing camera captured this image of a bright Geminid.

A late night clearance allowed Richard to observe again, seeing 46 Geminids between 5am and 6am, six of which were mag 0 or brighter.

Jeff Stevens carried out a short meteor watch between 22:40 and 23:40 UT (20 mins with interference from broken cloud), seeing 9 Geminids. 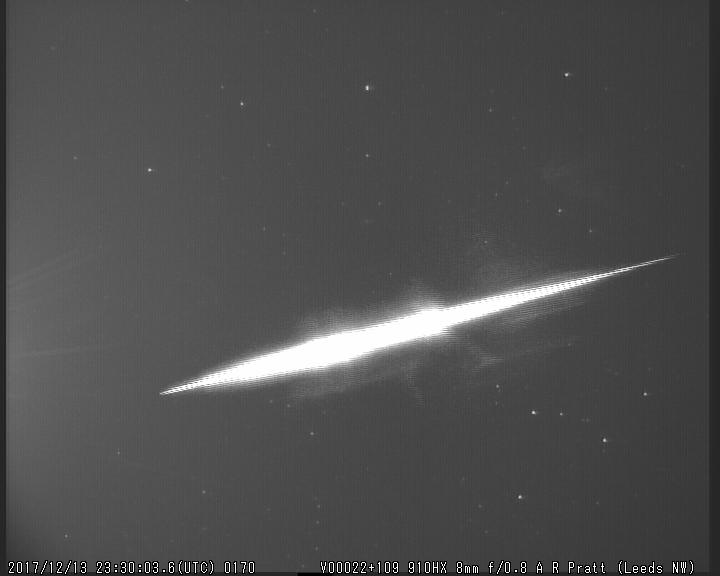 Alex Pratt (Leeds) had intermittent clearer spells along with a number of smaller cloud gaps – conditions that are challenging for visual observers but which hinder video observing much less.

He has reported imaging around 800 events, with around 500 likely to be Geminids.

His best event was the mag -4 Geminid at 23:30 UT, shown in the accompanying image, that was recorded by his NW facing camera.

Paul Sutherland (Walmer, Kent) and Stuart Atkinson (Cumbria) reported their results from the early hours of the 14th via Facebook.

Paul’s images were captured via his automated camera system (Fujifilm X-M1 with Samyang 12mm f2 lens).  Over a 5 hour interval, Paul captured images of 48 meteors.  Stuart reported seeing around a couple of dozen Geminids visually in around 40 minutes and imaging three of them.

Paul’s best image, from 01:38 UT, is shown below left, with Stuart’s best image on the right 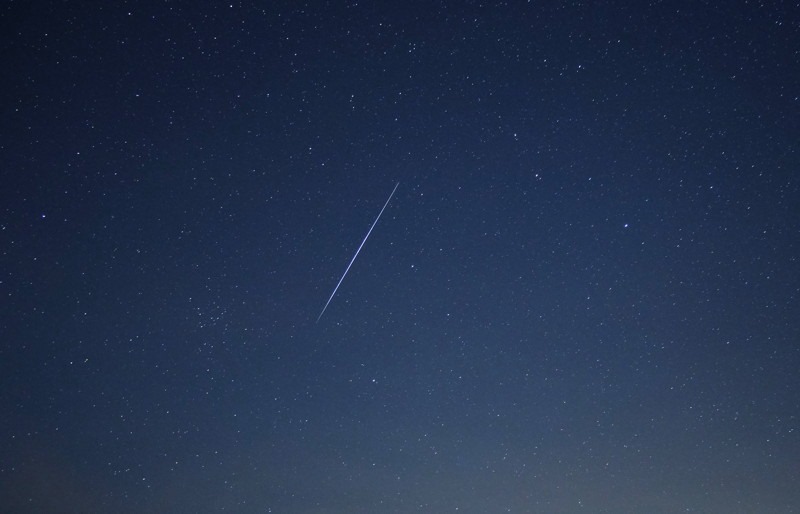 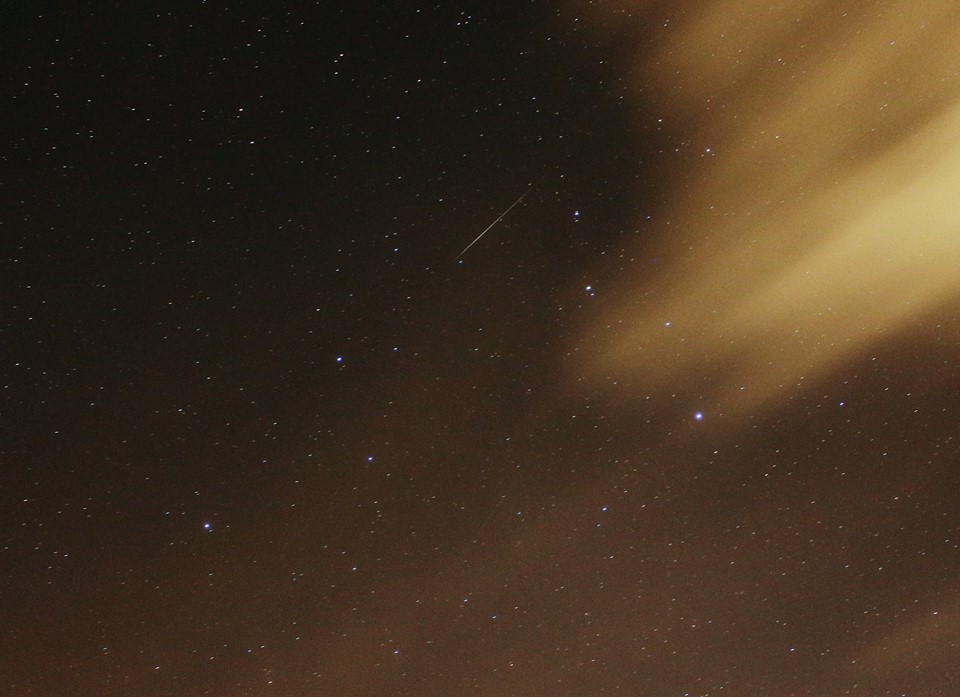