A further meteor watch by Tom during the night of Dec 15-16, illustrated how rapidly Geminid rates fall away in the nights following maximum.  During observations totalling 5 hours 15 minutes (LM 5.3), he recorded 16 meteors, of which just 7 were Geminids.

Robin’s wife Sally, a less experienced observer, monitored a different part of the sky between 01:25 and 02:11 UT, seeing 25 meteors which were probably all Geminids.

Pam Foster (Pitlochry) observed from indoors between 19:40 and 00:40 UT (4 hours observing) on Dec 13-14 and, despite increasing problems with cloud during the final 80 minutes, saw 102 meteors.

Richard Fleet (Wilcot, Hants) reported seeing 5 meteors in good skies, between 23h and 0h UT on Dec 15-16, with just one being a Geminid, once again illustrating the rapid fall off in rates post-maximum.

One of his images is reproduced here and shows a bright Geminid that ended behind a mountain.

One of Bill’s Tweets has led to some interesting debate between experienced meteor observers.

The image is reproduced here and shows a Geminid that appears to have a rather wavy path.

The subsequent Twitter discussions have focussed on two questions:

– whether some meteors do show “corkscrew”-like motion – some visual observers have in the past reported seeing such effects, but this has been difficult to verify due to the lack of a permanent record.

– whether the wavy motion seen in this image was a genuine property of the meteor or could have been due to the camera being shaken by the wind or the workings of the camera (“mirror slap” has been suggested).

Bill has also posted this  time lapse video  showing 29 meteors that he recorded close to the Geminid activity peak from Tenerife.  It is certainly worth waiting for the event 1:10 into the video !

Here are three additional Geminid images that were captured by Alex Pratt (Leeds) during the night of Geminid maximum (Dec 13-14). 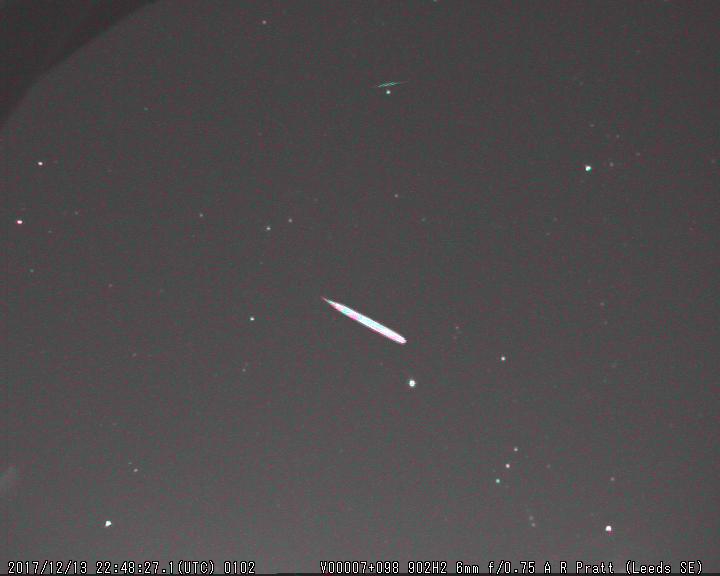 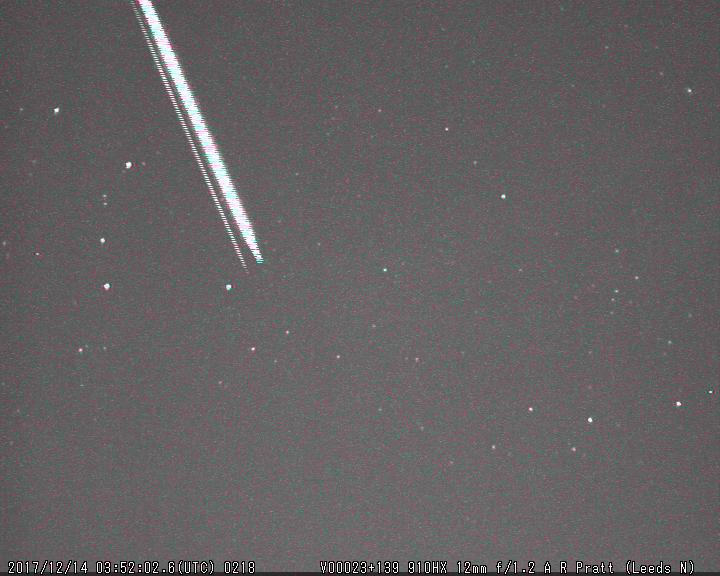 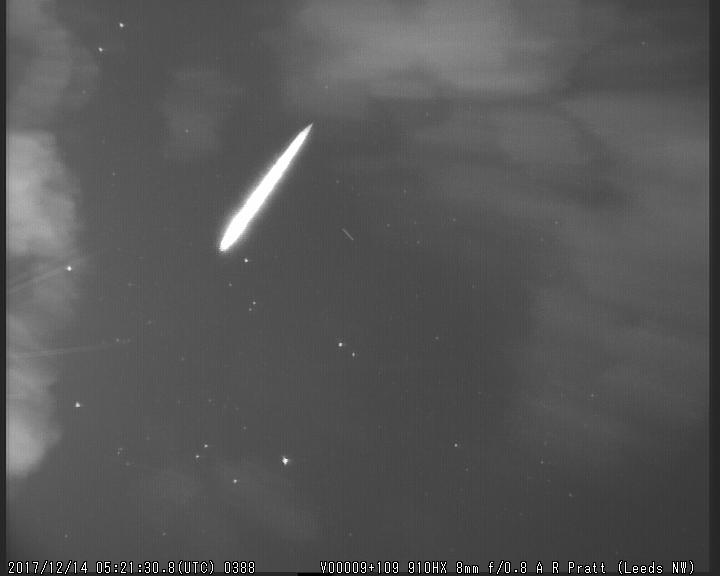 Observing conditions were not ideal, but Alex commented

“Fortunately I had intermittent clear spells, with frequent gaps in the blanket of clouds. Video cameras can deliver the goods in these circumstances and a number of meteors were recorded through thin cloud or small gaps in the clouds.”

The first image shows a Geminid heading from Gemini towards Orion and was captured via his SE facing video camera at 22:49:27 UT on Dec 13th.

Four stars of the ‘W’ of Cassiopeia can be seen to the left of this meteor.

The fainter streak of light to the left of the meteor is an image artefact and is a consequence of Alex operating this video camera through a window.

The cloud in this image would have made life difficult and less rewarding for visual observers, but video cameras “don’t care” and continue to record any meteors that appear through cloud gaps.

Below are four more Geminid images captured by Paul Sutherland (Walmer, Kent) during the night of Dec 13-14.

Paul had his camera (Fujifilm X-M1 with Samyang 12mm f2 lens) running from 01.08 UT until 06.35 UT, although twilight was becoming an issue by 06h.  He added “The lack of colour in the Geminids is quite noticeable after the colourful bright meteors provided by the Quadrantids, Perseids and Leonids“. 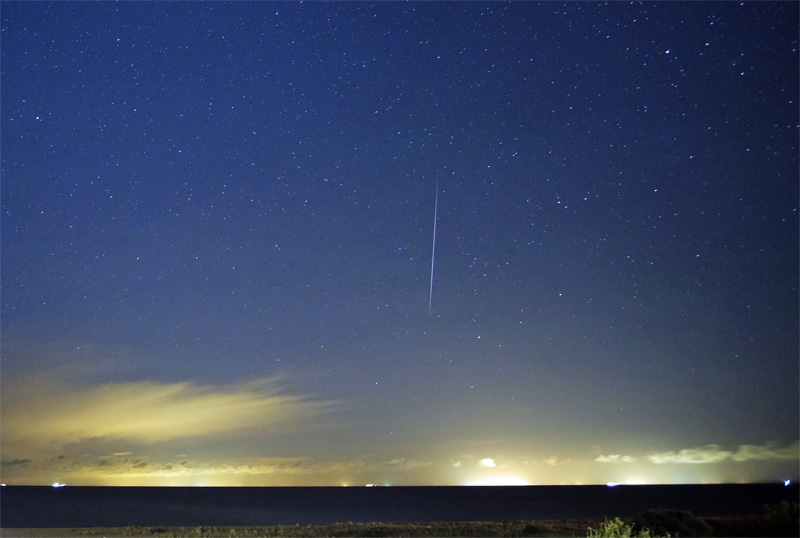 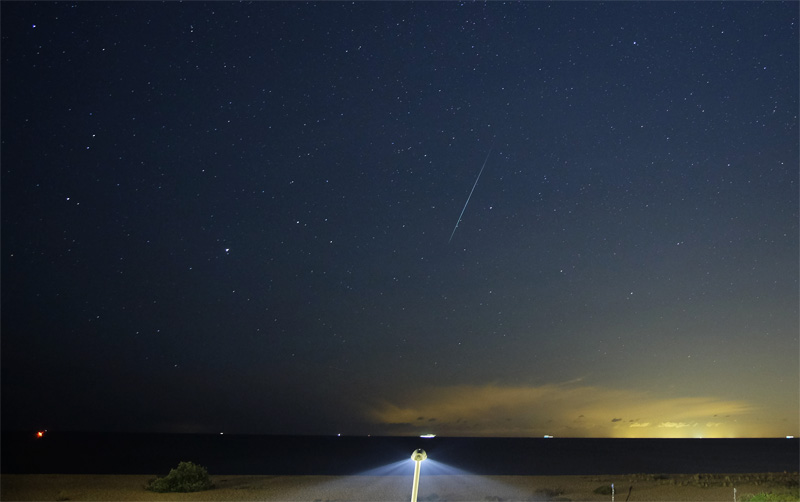 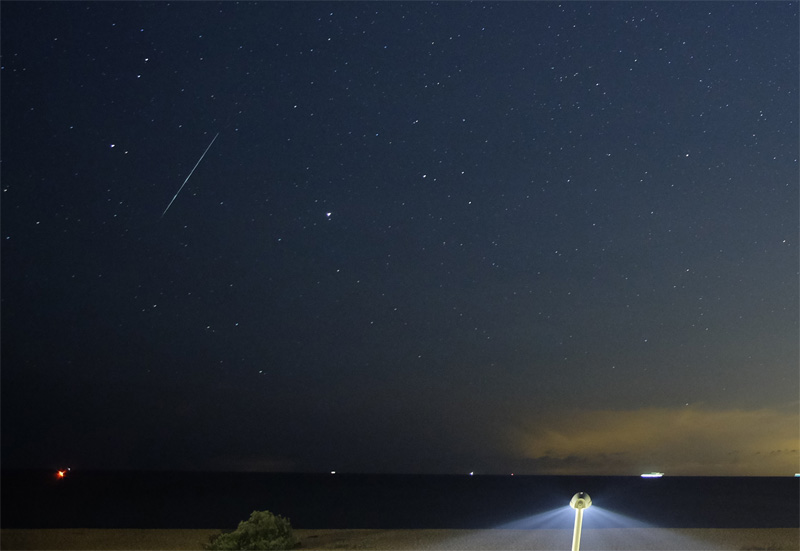 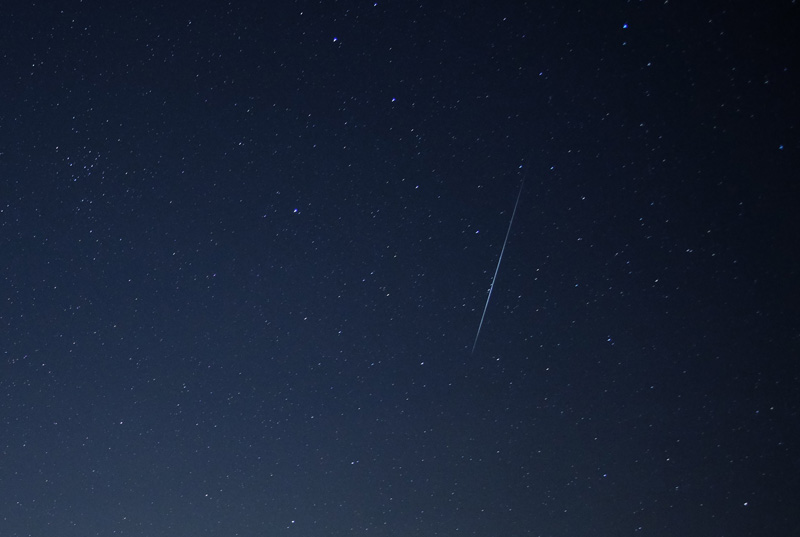