October Camelopardalids:  A minor meteor shower that has occasionally produce good observed rates, including in 2016.

Draconid (Giacobinids): Can produce very high rates when parent comet is near perihelion – 2017 is not such a year

These are two low activity meteor showers that occasionally do something “interesting”. 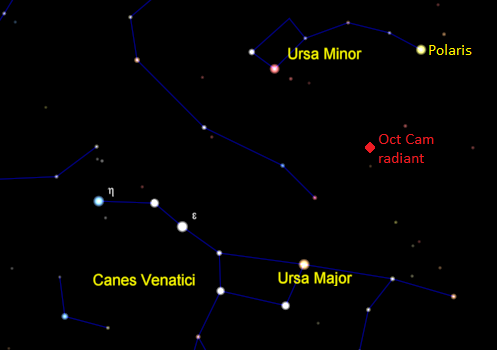 A significant level of activity from the October Camelopardalids was reported by video observers in 2005 and 2006. Another outburst was recorded in 2016, between 14h and 15h UT on Oct 5th (for further info, see here ).

No significant activity was seen in other years. A recurrence in 2017 of the 2016 event would most likely peak some time between 19h and 20h UT on Oct 5, favouring observers in western Asia.

The October Camelopardalid radiant, at approx RA 11h, Dec +78, is located roughly midway between the pointers (alpha and beta UMa) and Polaris, as is shown in the accompanying chart.

Unfortunately for visual observers, moonlight will be a serious problem in 2017, with Full Moon occurring on Oct 5. Video observers should, however, be less seroiusly affected.

The Draconids, also known as the Giacobinids (due to their link with Comet 21P/Giacobini-Zinner), produced meteor storms in 1933 and 1946, along with strong activity in 1985,1998 and 2011. However in most years very little activity is seen and 2017, with the parent comet still in the outer part of its orbit, is expected to be such a case. The next potentially good year will be 2018.

The Draconid radiant, at RA 17h28m, Dec +54, lies just to the right of the head of Draco (see the chart below). Draconid meteors are slow moving – a feature that should allow them to be readily distinguished from any sporadic meteors that might by chance line up with the Draconid radiant. 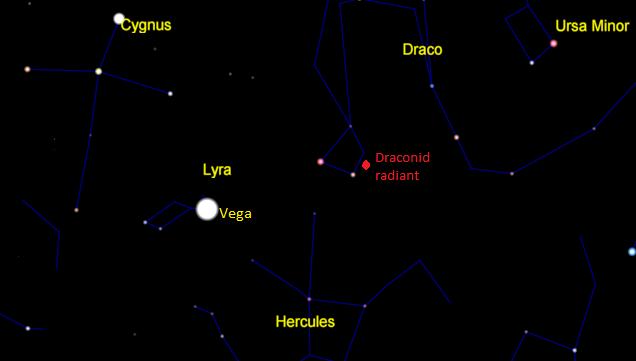 From the UK, the Draconid radiant is above the horizon all night and is highest in the sky during the early evening hours.