The Quadrantid meteor shower is active during the first week of the year, with peak activity set to occur during the night of Jan 3-4. 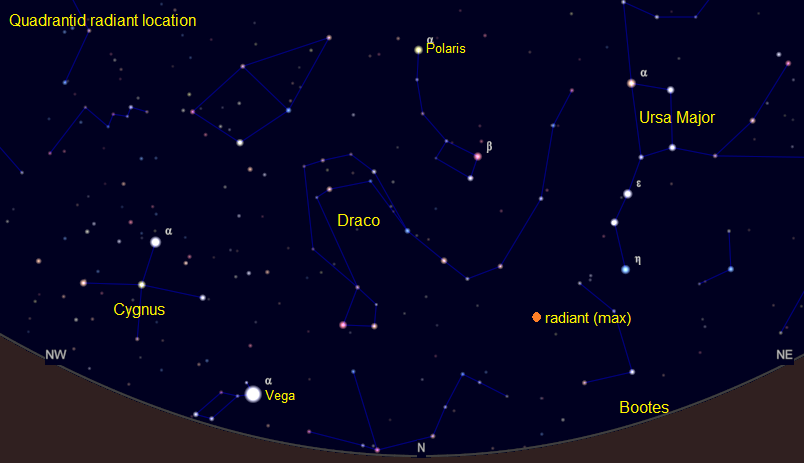 The radiant of the Quadrantids is located in a rather bland area of sky between Draco, Bootes and Ursa Major – an area of sky formerly occupied by the now defunct constellation of Quadrans Muralis. The position of the radiant for the night of maximum is shown in the accompanying diagram (UK horizon for late evening).

The statistics show that the peak rate from the Quadrantids regularly exceeds that of the Perseids and in some years may exceed that of the Geminids. However … the peak of the Quadrantids is much narrower than the peaks of the other major meteor showers and so if you miss the peak by a few hours you will see much diminished meteor rates.

The ideal visual observing circumstances involve the peak occurring with the radiant high in the pre-dawn sky and with the Moon absent.

Although the 2018 peak, predicted for 20h UT on January 3, occurs during the hours of darkness for observers at European longitudes, it is also at around the time when the radiant becomes lowest in the northern sky, a factor that will inevitably reduce observed rates significantly. Observers at Asian longitudes will fare better with the radiant being much higher in the sky. Be aware, however, that due to mass sorting within the meteor stream, radio rates may peak an hour or two ahead of the above time and rates for bright meteors may peak an hour or two later.

The particularly bad news for visual observers in 2018 is that Full Moon occurs on Jan 2nd and will effectively be present all night (located in Cancer) during the night of Jan 3-4. To minimise the effect of the moonlight, aim to keep the Moon outside your field of view and, if possible, shaded from direct moonlight. Most importantly of all, wrap up well – January nights with clear skies can be VERY COLD.

More general advice about visual meteor observing can be found in this guide.

Imagers will also be adversely affected, although experience shows that video observers suffer less than do DSLR imagers.