With New Moon occurring on November 18th, skies were set to be moon-free for the 2017 Leonid peak.

Although a quite good meteor shower, the Leonids do provide some challenges.

Most significantly, the Leonid radiant doesn’t rise above the horizon until around 22:30 local time and so no Leonids can be seen early to mid evening. Observed rates before midnight are inevitably rather low and so visual observers (if they have clear skies) have to choose between starting late evening and patiently waiting for rates to rise as the hours pass, or dragging themselves from their warm beds in the early hours of the morning when the radiant has climbed earlier.

For imagers, there is also the issue that Leonids are fast moving and thus deposit less light per pixel as they cross the camera’s field of view.

The Leonid period can also often be cloudy, but in 2017 many parts of the UK enjoyed some overnight clear spells during the nights around Leonid maximum, allowing some impressive results to be obtained. 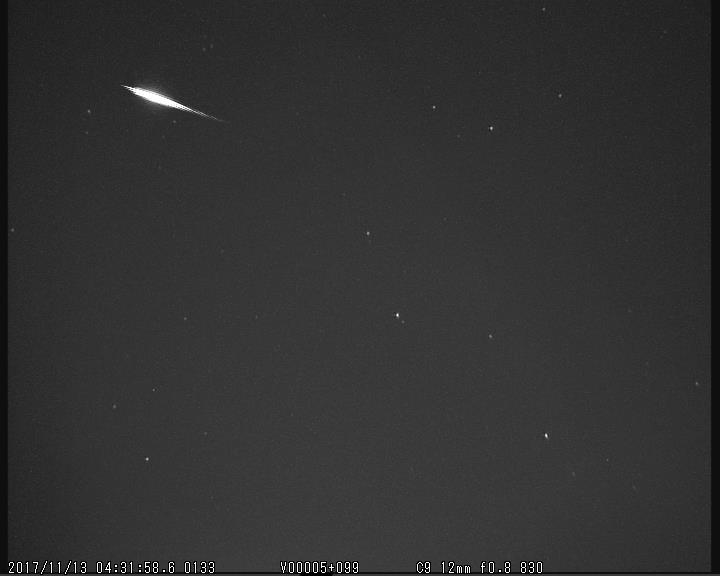 The first Leonid report came from Bill Ward (Kilwinning) who captured this image of a bright Leonid at 04:31 UT on the morning of November 13th.

The image shows it moving away from the ‘sickle’ of Leo (which is where the Leonid radiant is located).

Bill has also posted a video clip which shows the fireball, its associated persistent train and a spectrum of the fireball that contains a number of ‘forbidden’ spectral lines from oxygen, including the green line at  557.7nm.

The video can be viewed  here

‘Forbidden’ spectral lines are spectral lines that are not seen under normal conditions near the Earth’s surface, but can be seen in much less dense environments, such as is the case high (above 110km) in the Earth’s atmosphere. Meteor showers, such as the Perseids and Leonids, that produce faster meteors are more likely to be visible at such altitudes. 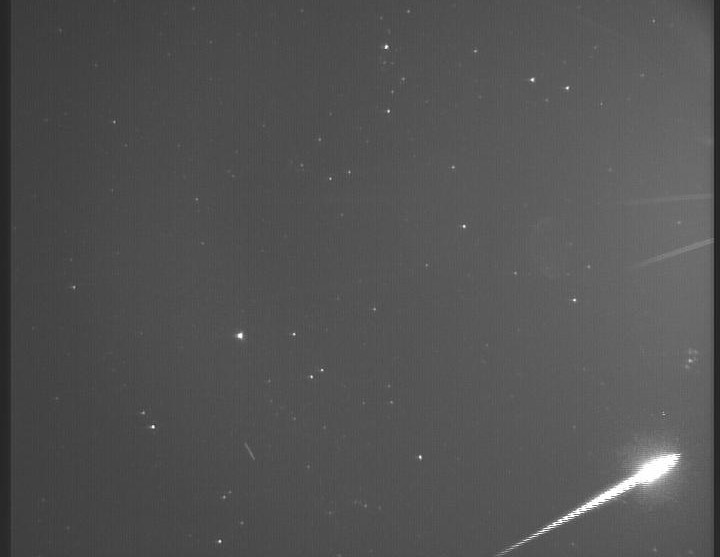 Only around an hour later, Alex Pratt(Leeds) captured this image of a magnitude -3 Leonid via his NW facing camera.

In the image, Perseus is near the top and Auriga is near the bottom, with the Pleiades being just above the brightest part of the meteor.

Tom Banks (Comberbatch, Cheshire) carried out a visual meteor watch between 23:08 and 01:08 UT, recording 4 Leonids, 2 southern Taurids and three sporadics (LM 5.0).  The brightest meteor was a mag -2 blue-green Leonid at 00:43 UT that passed through Ursa Major.  Attempts at a second watch, starting at 01:28 UT, was soon frustrated by increasing cloud, with no further meteors being seen. 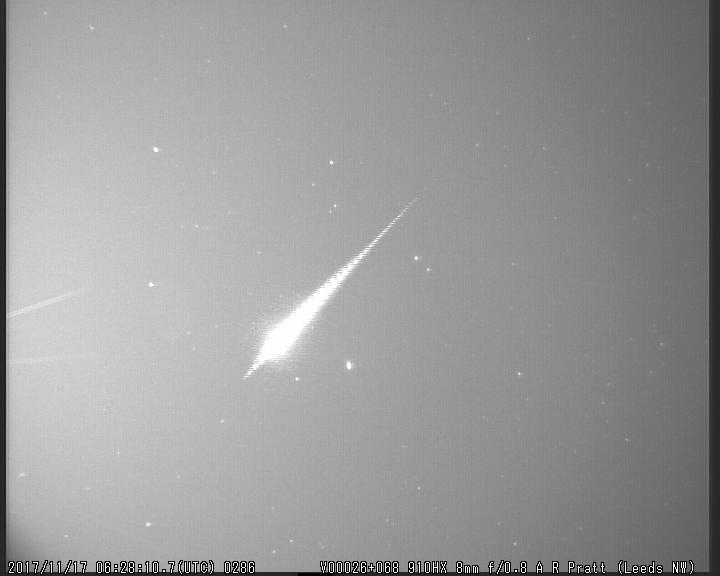 Alex Pratt (Leeds) captured this image via his NW facing video camera of a Leonid fireball as it passed through Auriga at 06:28 UT on the morning of November 17th.

The fireball was also imaged by Mike Foylan (Rathmolyon, Ireland), another member of the NEMETODE network.

Triangulation of the sky paths recorded in the two images revealed the fireball to have had an atmospheric trajectory above Morecambe Bay.

The fireball was probably about magnitude -4.

Alex also reports that a good number of Leonids were recorded by this N and NW facing cameras (SE facing camera yet to be checked).

Cloud seems to have been much more extensive during the night of Nov 17-18 and no reports have been received so far.

The night of Nov 18-19 produced clearer skies with a weather front clearing towards the south west as the night progressed. Tom Banks (Comberbatch) and Tracie Heywood (Leek, Staffs) both reported skies becoming clearer in the early hours of the morning, but with clearances not being sufficiently prolonged to allow useful meteor watches. Tom finally had clear enough, though hazy, skies by 04:35 UT and saw 4 meteors (3 Leonids, the fourth probably being a Taurid, LM 4.8) before haze and twilight became too big a problem by 06:15 UT.

Automated imaging systems, were less adversely impacted by the variable cloud, being able to simply exploit any clear skies that occurred.

Although the Leonids had passed their peak, they still produced (at least) two more fireballs. 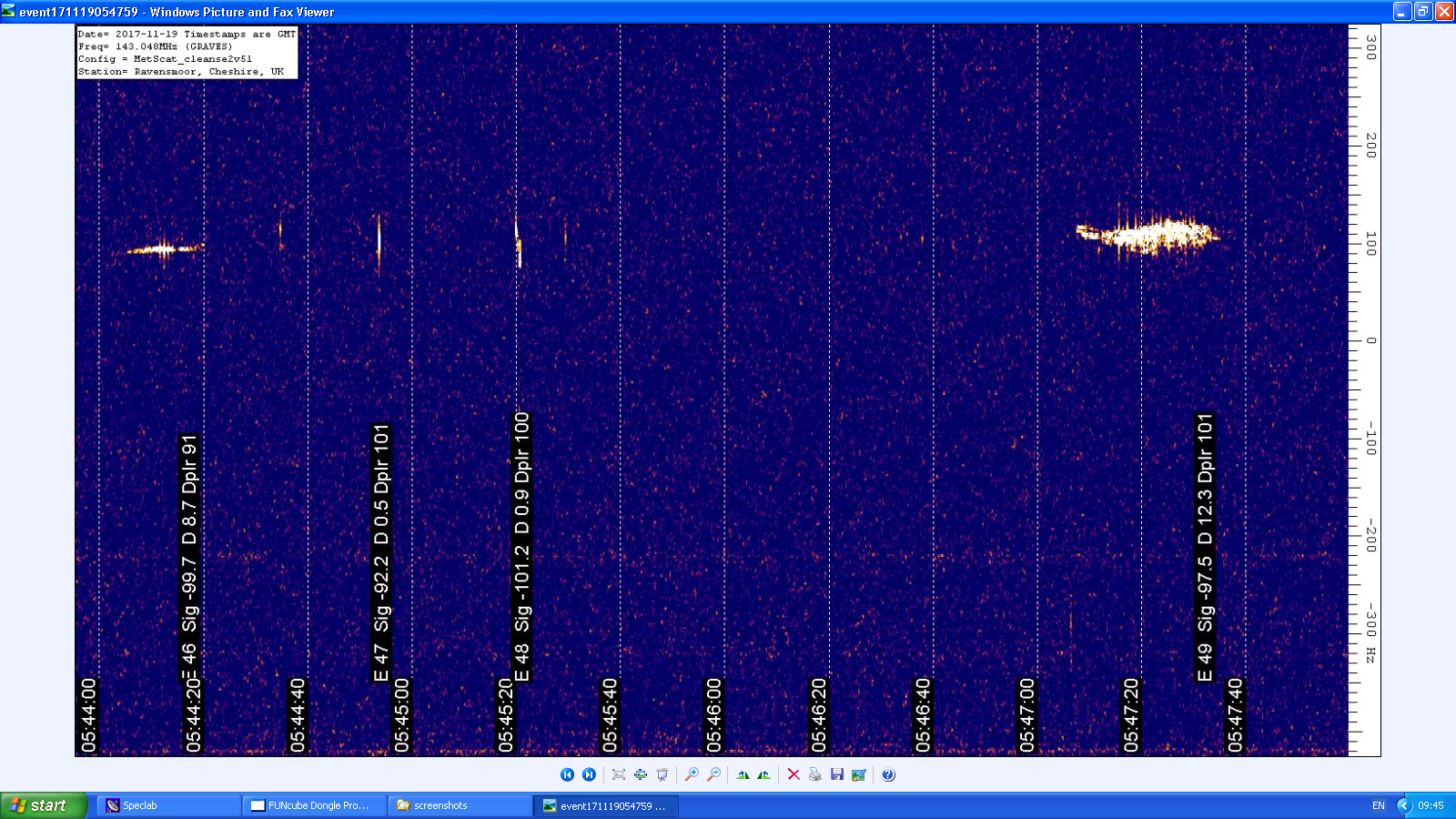 One, at 05:47 UT, possibly of magnitude -6, has been reported by William Stewartof the NEMETODE network (http://nemetode.org/index.html ).

In addition to imaging the fireball itself,  William also imaged its spectrum and detected the radio reflection, shown here, from its ionisation trail.

Another NEMETODE member, Michael O’Connell, also reports having picked up the radio reflection from Ireland.

An image of a bright meteor passing through Cepheus at this time was recorded by the Bayfordbury camera of the Univ of Herts all-sky system. The image can be seen  here. 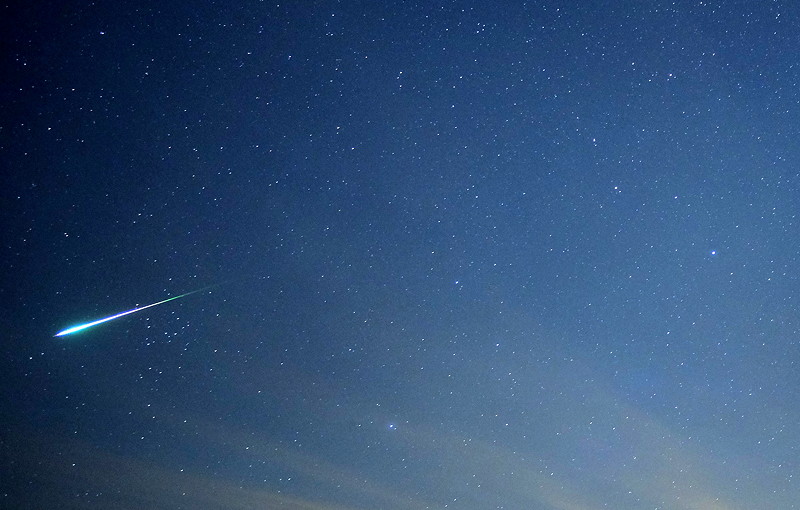 Paul Sutherland (Walmer, Kent) captured this image of a bright Leonid at 02:30 UT(Paul suspected that it was probably a fireball, but he didn’t see it visually and so no magnitude estimate was available).  The image was secured using a Fujifilm X-M1 camera with a Samyang 12mm f2 lens.

In reply to Paul’s Facebook post about this fireball, Koen Miskotte reported that the fireball was also imaged from several locations in the Netherlands and was probably about magnitude -8 … and so was easily within the fireball magnitude range.

More images of this fireball, timed more precisely at 02:29:08 UT, can be viewed  here

An additional image of this fireball, low in the ESE sky was captured by the Bayfordbury camera of the Univ of Herts network. The image can be viewed  here

Paul has also supplied additional images showing the persistent train slowly fading and drifting across the stars of Coma Berenices.

The lower left hand image shows the train a few seconds after the meteor; the lower right image shows it 10 minutes later. 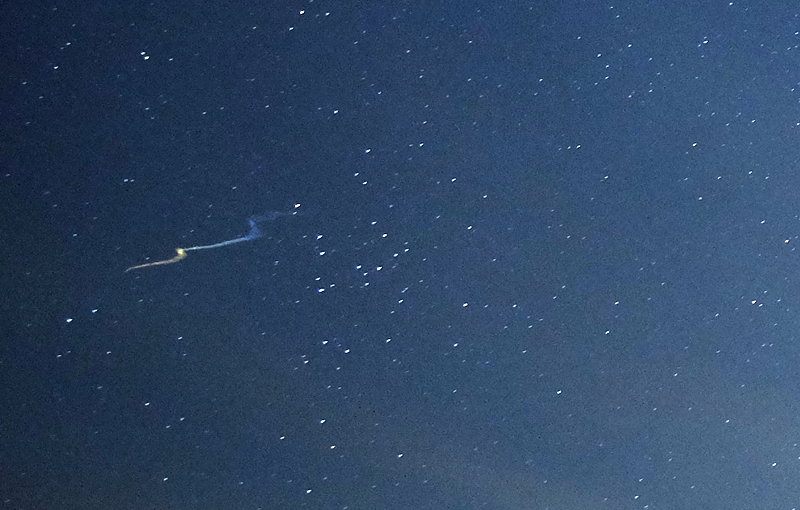 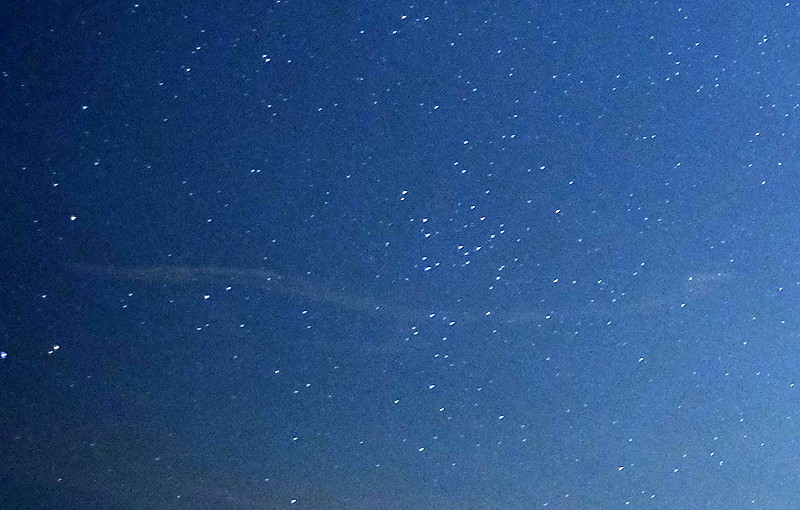