March and April tend to be quiet months for fireball reports. In March, it still gets dark reasonably early but the nights are still rather chilly and so people are not likely to stay outdoors longer than they need to. By April, the nights are less chilly, but the switch from BST as well as the shortening nights means that many people are in bed before it gets dark.

Interestingly though, the spring months have a reputation for producing a high number of evening fireballs. There is however little evidence to support the idea that the earth encounters more fireball producing meteoroids at this time of year. a more likely explanation is that most of the meteor activity originates from around the plane of the ecliptic and this is higher in the sky during the early evening in spring than it is at other times of the year.

The following fireballs were reported during March and April :

Elizabeth Challis (Southbourne, Dorset), Simon Pardoe (Exmouth, Devon), Andrew Tongue (Bordon, Hampshire), Paul Norton (Portsmouth) and Mark Jones (Petersfield, Hampshire) reported a fireball, of around magnitude -7, seen at approx 21:29 GMT on March 14th. This was heading in a roughly N or NNW direction and descending slightly in altitude above the horizon as it did so. Elizabeth, Paul and Simon noted blue and/or greenish colours, whilst Elizabeth and Mark noted some fragmentation taking place. The duration of the fireball was around 2-3 seconds.

The Hemel and Bayfordbury cameras of the Univ of Herts all-sky system were clouded out unfortunately. However, their Niton (Isle of Wight) camera does show a trail low in the northern sky in the 60 second image which starts at 21:31:40 GMT (see star.herts.ac.uk/allsky/imageget.php  ), which is likely to have been the fireball. There is another trail in the preceding image in the same part of the sky, but this earlier trail was from an aircraft that had been taking several minutes to cross the sky.

Christopher Hill (Cheshire) reported a bright orange fragmenting fireball seen at approx 00:40 GMT (01:40 BST) on the morning of March 30th. From his location this started  around altitude 35 degrees in the south east and descended slighly as it headed towards the south.

This fireball was also imaged through broken cloud by Alex Pratt (Leeds).  His image is shown below : 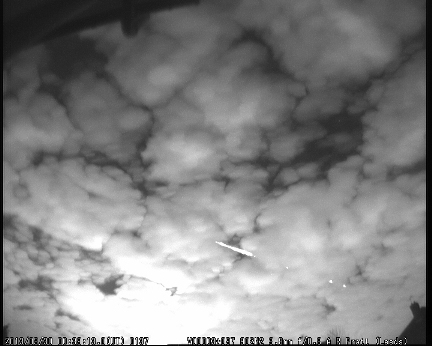 Alex then analysed his image in conjunction with one recorded by William Stewart from Cheshire. The map below shows the calculated ground path : 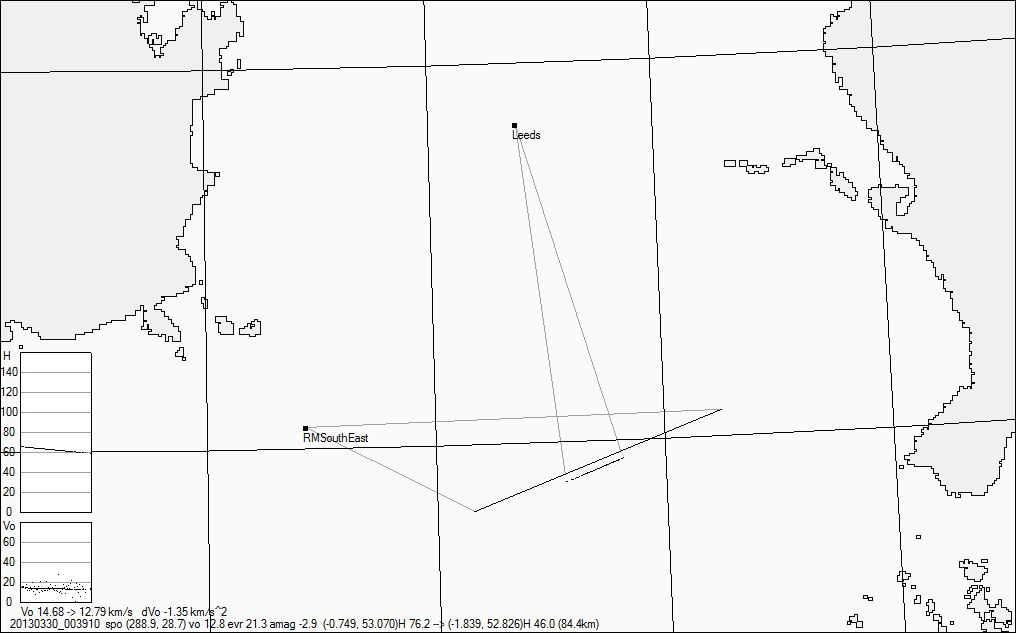 Five other reports of this fireball were also posted on-line. All of these were from the Manchester/Cheshire area, suggesting that this was the only part of the country having clear skies at the time.

Andrew Robertson (Hinton, Suffolk) and Es Reid (Stapleford, Cambridge) reported a bright (possibly brighter than mag -8) fireball seen at approx 01:18 GMT (02:18 BST) on the morning of April 3rd (both had been outside to observe Saturn). Andrew described its colour as “silvery white with bright green tinges/bursts“, while Ed described it as “bright lemony green“. Both noted that it descended almost vertically downwards but because they saw it from different locations, they saw different paths across the star background. Ed saw it start near Vega, whereas Andrew saw it start in the Draco area and pass to the left of Albireo.

Several other reports of this fireball – from Wigan, Peterborough, Leicestershire and North Wales were posted on-line. Most of these also noted its green colour.

John & Daragh Patterson (Kirkcubbin, Northern Ireland) spotted a bright white/green fireball at approx 22:14 GMT(23:14 BST) on April 26th while driving. This passed overhead and was heading in a southerly direction. This fireball was also reported by Philip Carden (Cheshire).

Several other on-line reports of this fireball have been found. These were from Cheshire, Wigan, Northampton, Leicestershire and Lincolnshire. Although a variety of colours have been reported (as is often the case), several reports do mention a green colour. Unfortunately the University of Hertfordshire all-sky cameras at Bayfordbury and Hemel had a lot of cloud interference and so didn’t pick it up.

Any further sightings of these or different fireballs (meteors of magnitude -3 and brighter) would be welcomed by the Meteor Section.