Cloudy weather put paid to plans for Quadrantid observations from the UK and to the chances of seeing many fireballs during the rest of the month.

However, four UK fireballs were reported to the section, with two being reported by multiple observers :

Dominic Sleath (Sheffield), Jonathan Cooper (Shap, Cumbria) and Nigel Sutherland (Rothesay, Argyll&Buye), reported a bright fireball of around mag -8 which  appeared at approx 23:55 GMT on Jan 8 (this was the first night of this year’s Stargazing Live, but the fireball probably appeared too late in the night for observers who had gone outside after the TV programme ended at 21:30). The fireball was reported to be heading in a NNW direction and was described as being orange or yellow in colour and including several brightness flares.

Peter Grego (St Dennis, Cornwall) reported a slow moving fireball seen at 05:00 GMT on Jan 10. Peter’s sketch of the fireball is shown below : 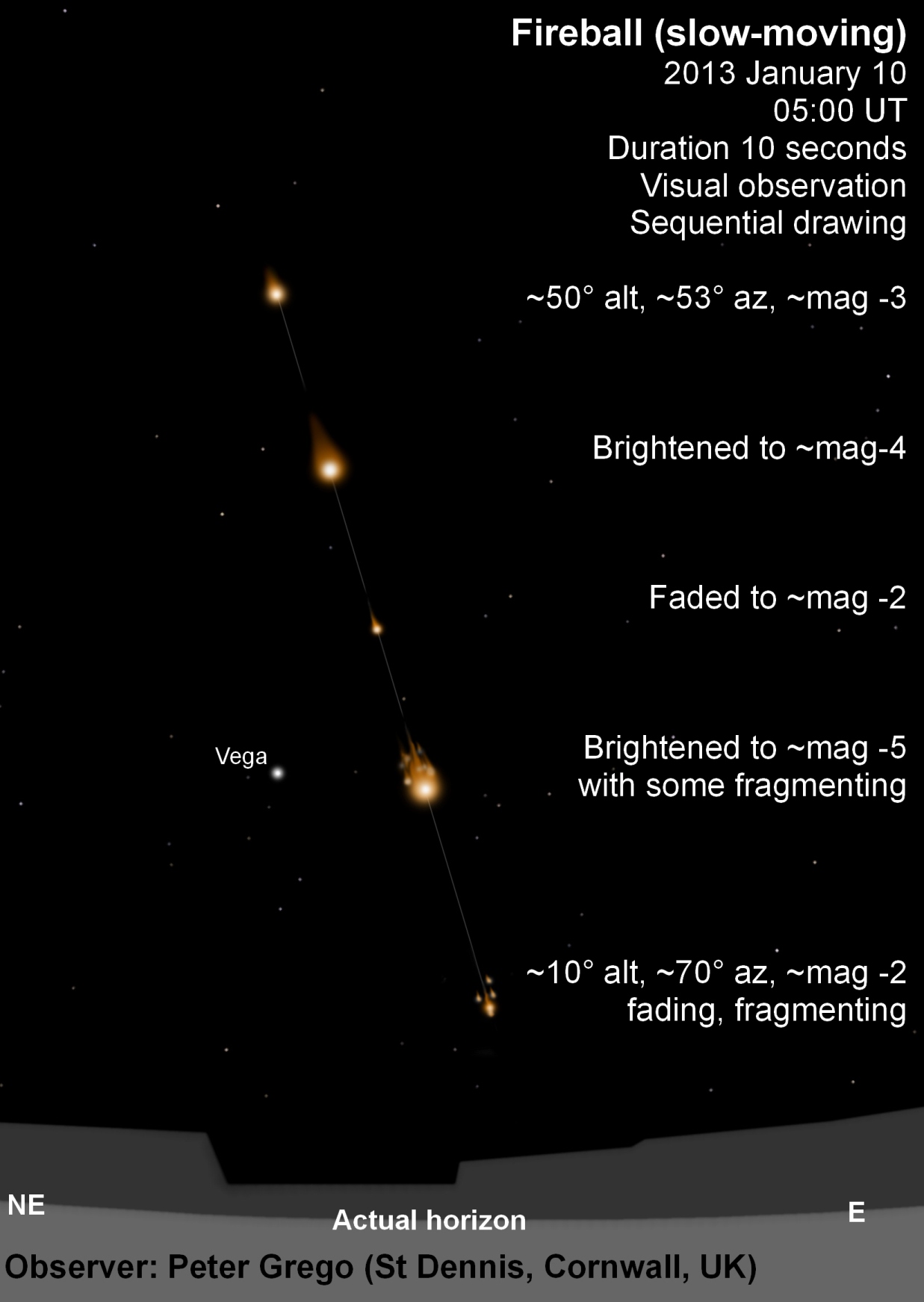 Christian Hollingbery (Marlborough, Wiltshire) reported a mag -4 fireball at approx 18:20 GMT on Jan 11. This was described as being yellow-white in colour.

The highlight of the month was a fireball that appeared at approx 21:04 GMT on Jan 30 and was reported by Jane Needham (Nottingham), Brian Joynes (Doncaster), Julia Harrison (Eagle, Lincs), Pamela Foster (Pitlochry, Perthshire) and John Bennett (Wellesbourne, Warks). The fireball was heading in a roughly East to West Direction and was most frequently described as being green in colour, although orange and blue were also mentioned by some observers. There are also many other reports on-line of this fireball. These can be found at lunarmeteoritehunters.blogspot.co.uk/2013/01/uk-bolide-metreor-fireball-30jan2013.html and at www.ukweatherworld.co.uk/forum/index.php

Any further sightings of these or different fireballs (meteors of magnitude -3 and brighter) would be welcomed by the Meteor Section.

The SPA’s Fireball report form can be found at : www.popastro.com/meteor/fireballs/reportform/index.php

Advice regarding the details to report :  www.popastro.com/meteor/fireballs/makingobservations/index.php