With the Orionid peak being badly hit by moonlight, there was little scope for visual observations. However, Richard Fleet has compiled this composite image of Orionid meteors that he imaged during the night of Oct 23-24 : 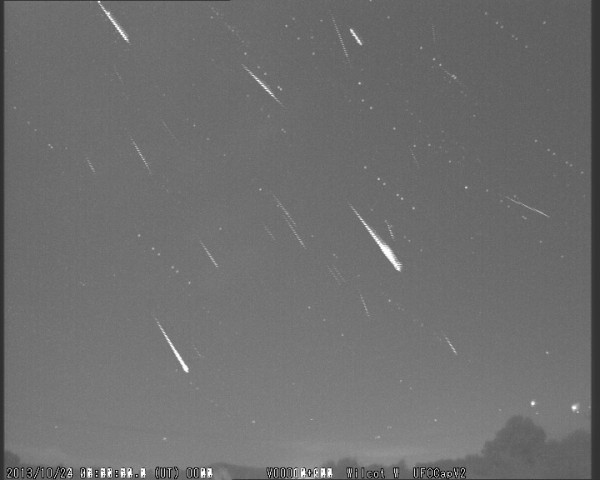 The October Camelopardalid minor meteor shower has caught observers attention on several occasions in recent years. There was no expectation of any outburst in 2013, but several observers set up their camera systems to monitor the activity levels.

These included William Stewart and Alex Pratt of the NEMETODE group who reported via the meteorobs forum that a provisional analysis of NEMETODE data showed that a total of 20 October Camelopardalids were detected between 2013 Oct 05 18:29 UTC and 2013 Oct 06 05:18 UTC. Of these, 7 were detected between 22:00 and 00:00 UTC. These would not be spectacular rates for a visual observer, but they do confirm that the shower was active in 2013.

With the parent comet 21P/Giacobini-Zinner being nearly 2 years past perihelion, only low Draconid activity was expected this year. Alexei Pace monitored the shower at radio wavelengths from Malta. A a selection of the most significant radio echoes captured can be found at  maltastro.org/radiometeor/DRA2013

Alexei commented that there seemed to have been no major surprises this year but noted that he had recorded two seemingly distinct ‘peaks’, as shown on the Colorgramme activity plot below ie.:
– 8 October between 20-21hrs UT
– 9 October between 04-05hrs UT (peak considerably higher than usual morning diurnal effect) 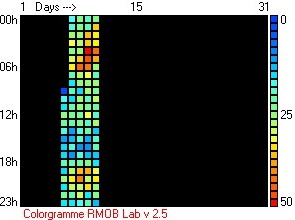