Here is a summary of UK fireballs reported to the section during October, November and December 2013.

Will Gater (Devon) reported two bright meteors seen during the night of Oct 4-5.

The first was seen as 23:28 BST (22:28 UT) on Oct 4. Will described it as “A very bright meteor seen through broken cloud. It travelled vertically downwards with several bright, orange/yellow fragments appearing to fall away from the main body towards the end of the track. The blue-green light from the meteor lit up the clouds noticeably”

The second was seen at 01:50 BST (00:50UT) on Oct 5. This was of mag -2, orange and gold in colour and left a bright orange train which faded very quickly. A few bright orange fragments were seen falling off the main body along its track.

Samantha Rolfe and Christopher Aikman (St Albans, Herts) reported a green fireball that they saw at 21:55 BST (20:55 UT) on Oct 6. This was heading downwards (N to S) in the eastern sky. This travelled across half of the sky and left a yellow/white train.

There is a short trail recorded low in the sky by the Bayfordbury camera of the University of Herts system at 20:50:30 UT. The image can be found at star.herts.ac.uk/allsky/imageget.php This trail is much shorter than the path reported by Samantha and Christopher, but it may well be that this camera only recorded the brightest part of the fireball’s path.

There were also several reports of this fireball on Twitter from observers in SE England.

Bearing in mind the locations from which the fireball had been seen, I contacted Peter Meadows and Nick James who both operate cameras from the Chelmsford area. Unfortunately the fireball appeared shortly before Peter started his camera operating for that night and Nick’s camera was pointing towards a different part of the sky.

Ed Wilson (Ludlow) reported a fireball seen through patchy clouds at 19:45 BST (18:45 GMT) on Oct 13 heading from the south east to the east. This was silver/white initially and became yellow/gold near its end. The fireball showed some flaring and its track widened towards its end. There is an additional report of this fireball from Flintshire on the Armagh Observatory fireballs page. A further report from Liverpool may also refer to this fireball if we assume that it confused BST and GMT.

John LeFebvre (Formby, Merseyside) and “leenied72” (Cupar, Fife) reported a bright fireball seen at 21:42 BST (20:42 GMT) on Oct 14. John saw it descending in the northwest from altitude 40 deg to 20 deg and estimated its magnitude to be between -6 and -8. There were additional reports of this fireball on Twitter (from Northumberland and the Isles of Lewis) and on the Armagh Observatory fireballs page (accessible via http://arpc65.arm.ac.uk/fireballs/search.html ) from Saltcoats, Irvine, Binian (all Scotland), Clough (N Ireland) and Co Kildare (Ireland) and Liverpool. Many of the reports, including the Fife report noted its green colour.

Brian Edwards (Kingseat, Fife) reported a fireball seen at 06:20 GMT on Nov 16. This was travelling north to south and lasted for 3-4 seconds before breaking up.

E Baker (Harrogate) reported a fireball seen at 17:40 GMT on Nov 19. This was 40-50 degrees above the southern horizon, had a path length of about 20 moon diameters and lasted for 2.5 seconds.

Peter (Irvine, Ayrshire) reported a fireball seen at 19:05 GMT on Nov 29. This was travelling ENE to WNW and lasted for 2 seconds. It was described as being white in colour and fizzling out into many small fragments.

A fireball at approx 21:00 GMT on Nov 29 was widely seen and was also captured by the Ravensmoor and Leeds video cameras of the NEMETODE  network. William Stewart has published a report on the NEMETODE website www.nemetode.org and the calculated path of the fireball is reproduced here. 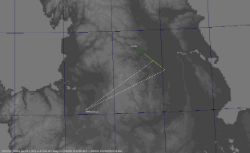 There were additional reports of this fireball on the Armagh website from observers in Birmingham, East Yorkshire and (possibly) Kent.

A very bright green fireball at 18:10 GMT on Dec 16 was reported by Elizabeth (Jedburgh) and Reuben Singleton (Clovenfords, Borders region). Reuben reports that he was driving home in a north-north-westerly direction when this brilliant light came across the sky from behind his left shoulder and was visible for a couple of seconds before vanishing from view. There were also Twitter reports of this fireball from witnesses whose locations included Edinburgh, St Andrews and Aberdeenshire.

A very bright fireball at 03:28 GMT on Dec 17 was reported by Michelle Davies (Gellioedd, north Wales). This lasted for 4 seconds and was described as being white in colour with a yellowish-orange tinge and leaving a short train as it descended in the sky, noving from the ENE to SSW.

A daylight fireball at 07:58 GMT on Dec 19 was widely seen. Reports were received from Jeff Powell in Norfolk and from Helen Critchell in Cambridgeshire. Both saw the fireball start in their western sky and move towards the eastern half of the sky with a duration of 1-2 seconds. Additional reports were reported later by Jonjo Evans (Shropshire), Peter Urwin (Edinburgh), Andy Thomas (Leicestershire), Mr Suzuki (Leicester) and Basil Spooner (Fishguard). 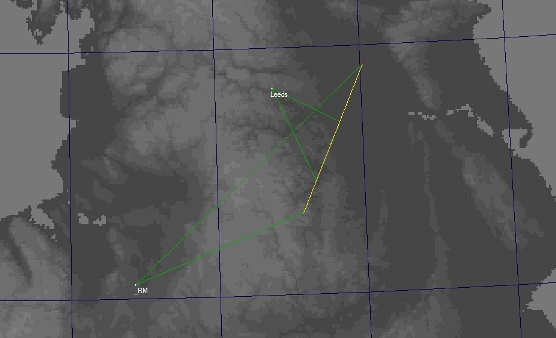 These, together with two images of the fireball obtained by the Ravensmoor and Leeds video cameras of the NEMETODE network (most/all other UK fireball cameras had switched off by this time!), allowed the fireball direction to be more clearly defined as heading roughly north east as shown in the map reproduced here. Neither image showed the end of the fireball, but based on visual reports, it may well have been over the North Sea.