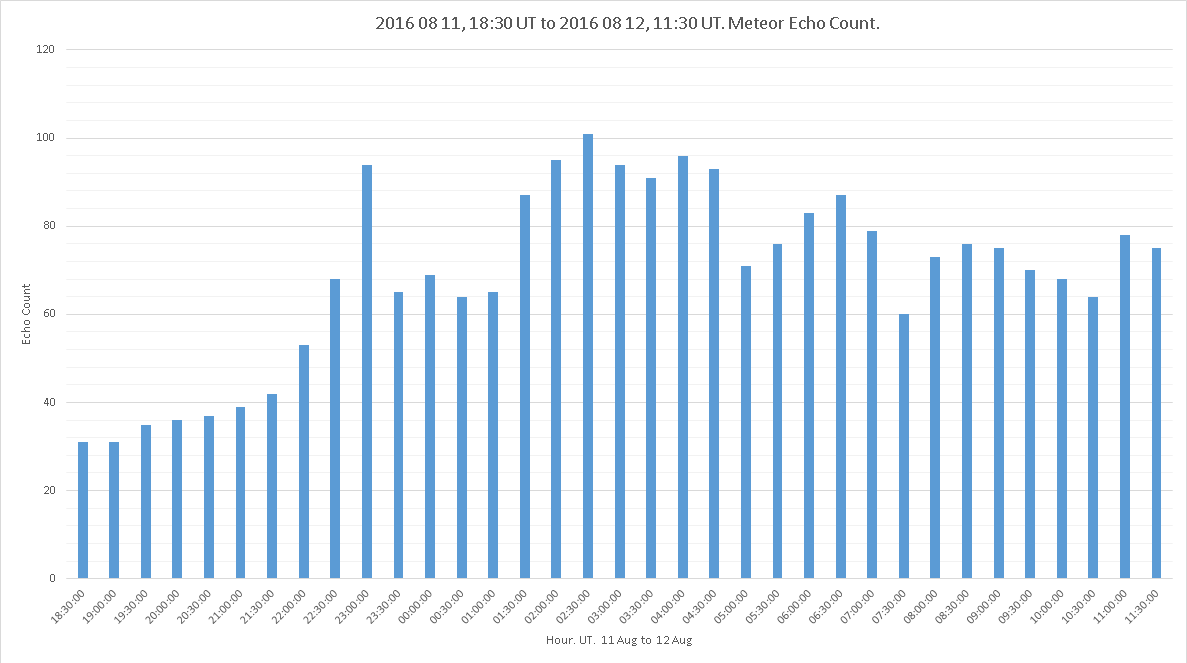 Bill Ward has generated this bar chart based on visual inspection of his image grabs during his radio monitoring of meteor echoes near Perseid maximum.

Each bar shows the echo counts during a 30 minute interval.

A distinct isolated peak can be seen in the interval that starts at 2300 UT on Aug 11.

This ties in with the enhanced Perseid activity reported by those visual observers who had clear skies.

The graph below has been generated from Bill’s colorgramme plot  on the rmob website. Each bar represents the meteor echo count during a one hour period. Note that the counts may differ from those in the above graph for which Bill was able to manually check fainter echoes in the spectrogram image captures – some of these will have been ignored by the HROfft software that reports the counts for colorgramme.

Also obvious is the 24 hour diurnal variation in counts with maxima near 05h UT and minima near 17h UT each day. Although meteor rates do routinely show a 24 hourly rise and fall, the hour to hour changes seen here are also influenced by the changing position of the Perseid (and other) radiants in the sky relative to the GRAVES transmitter and Bill’s receiver and also by the changing activity level of the Perseids themselves.

As can be seen, overall rates are clearly higher during Aug 11-12 than during the preceding and following nights. Whether the peak near 08h UT on Aug 12 ties in with any visual activity or is just a random fluctuation is not yet clear. 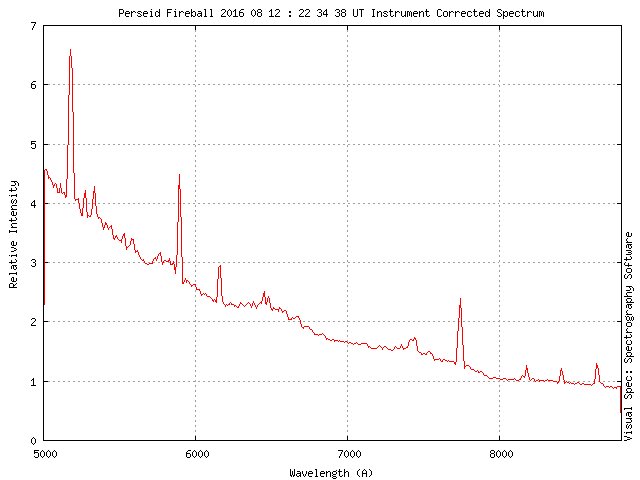 Bill Ward has generated this intensity plot for the Perseid spectrum that he captured at 22:34:38 UT during a short clear spell early in the night of Aug 12-13.

As often happens, only part of the spectrum fell within the camera’s field of view. Here we see the red and near infrared spectrum of this Perseid.

Bill was particularly pleased with the level of detail in this spectrum. He has compared the atmospheric emission lines (O O2, N, N2) in his spectrum with those recorded in a detailed spectrum by the (rather more expensive) VLT while observing a distant supernova in 2002.

The comparison is shown below

VLT spectrum sections are in black. The modelling done by the astronomers indicated this was the profile of an emission of 4200K at a height of 95km in our atmosphere. 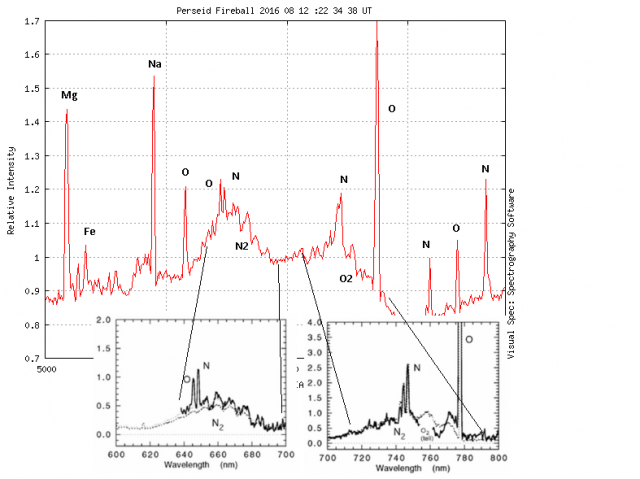 Bill notes that “as the devil is in the detail, if you look closely at the model line (at around 755nm from O2) it is missing from the VLT observation but it is a distinct line in my spectrum. Another cool aspect is the “height” of the lines in the regions marked. Comparing the various scalings shows a very good ratio relation. So it would suggest that my real spectrum matches the modelling quite well. 4200K it is! “