Alastair McBeath (Morpeth) had a lot of cloud interference and rather windy conditions, but in a series of short watches between 2338 and 0137 UT, totalling approx 1.05 hours (LM 6.1-6.2), recorded 47 meteors, 43 of which were Perseids. He also reports seeing a further 24 meteors (21 Perseids, 3 Sporadics) during 51 minutes of casual observing during spells with more cloud cover. 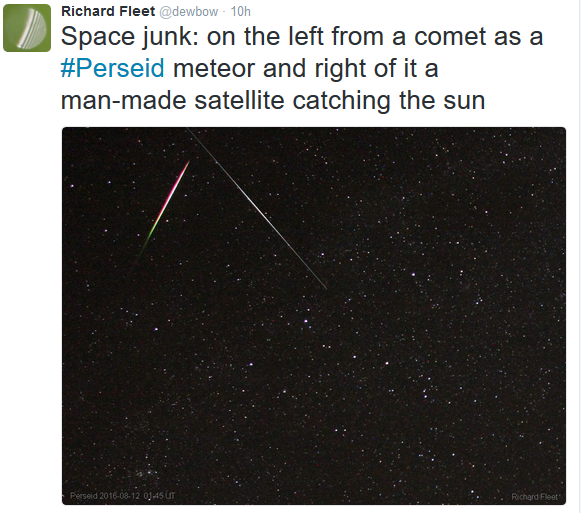 this image, showing a bright Perseid and a satellite.

The Perseid is travelling upwards in the image (showing the distinctive green colour at the start of its path and becoming reddish towards the end as it encounters the denser parts of the atmosphere.

Mike Feist reports carrying out out a series of short watches between 0020 and 0310 UT in skies in which the Double Cluster was visible along with some detail in the Cygnus Milky Way, noting a good number of bright trained Perseids including a particularly bright one in Auriga near the “Kids” which left a long-lasting train which he was able to follow for some time, using his 8×40 monocular, as it twisted and finally faded out.

In a posting to the SPA Forum, “HippyChippy” (near Stroud) reports that the cloud cleared around midnight, In slkies in whic the Double Cluster was easily seen along with a stunning Milky Way, 136 Perseids and 3 sporadics were counted between 12.50 and 3.15 BST when it clouded over again. Many left persistent ionised trains and a few were “really bright fizzers”, one of which seemed to break up and leave two tails.

Cloud seems to have been more widespread than on the previous night, with a weather front moving southwards across the UK, but some observers did get some clear sky.

Bill Ward (Kilwinning) had better luck than the previous night 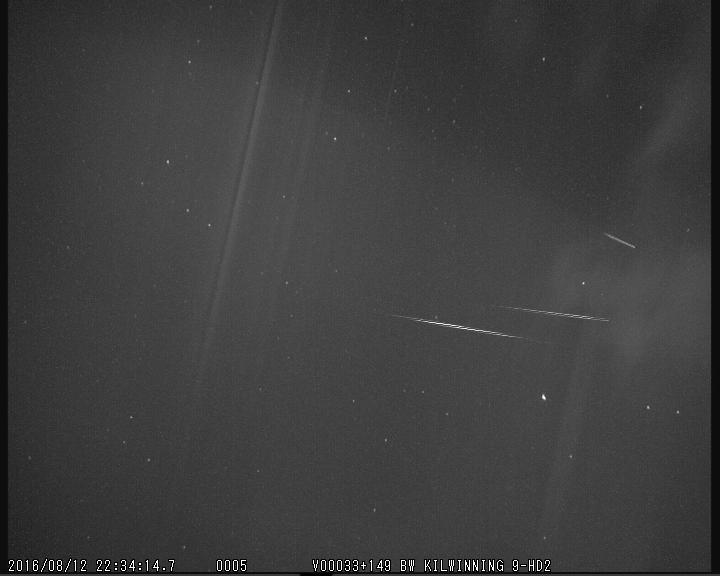 – but only just – as his observations were soon interrupted by cloud and rain.

… followed within a minute with his capture of a spectrum of a bright Perseid in which a considerable amount of detail was visible.

Paul Sutherland reports capturing  images of 19 Perseids and 2 sporadics. Some of the brighter ones are reproduced below. They were taken with a Fujifilm X-M1 camera fitted with a Samyang 12mm/f2 lens, working at ISO 1600. A few meteors finished with a flare-up. One left a persistent train that was recorded in the two following frames. Each frame was exposed for 10-15 seconds only. 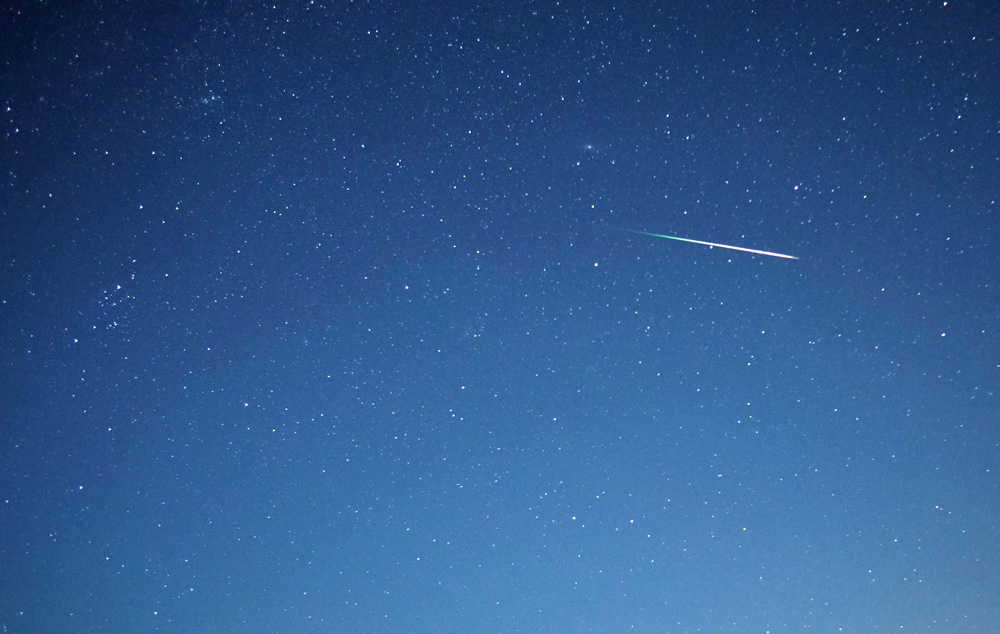 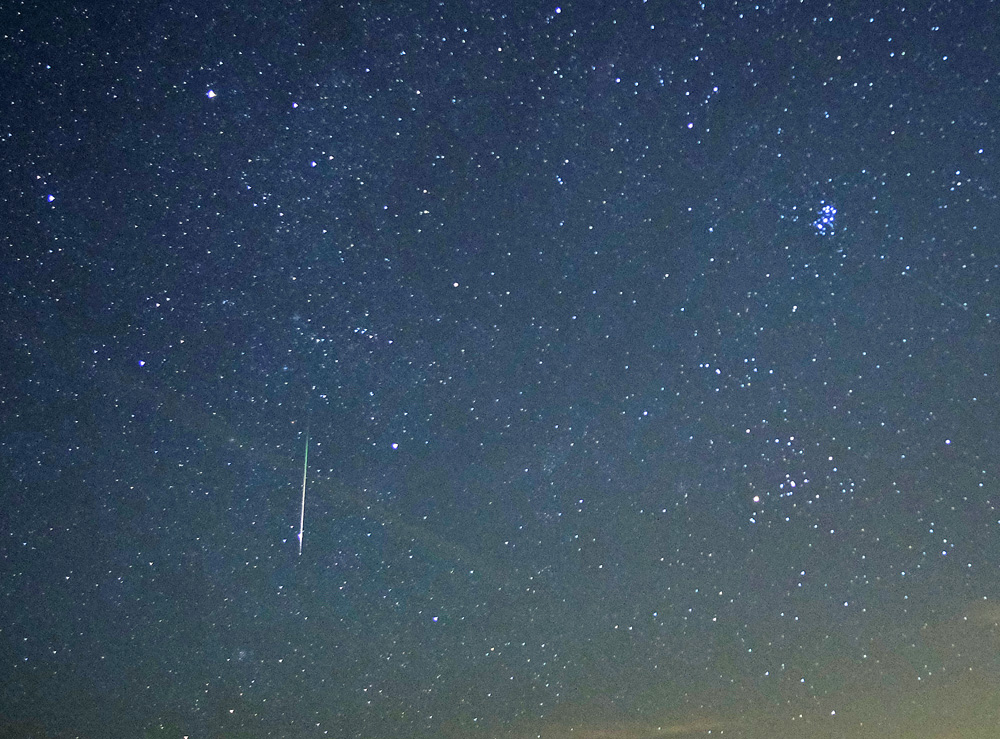 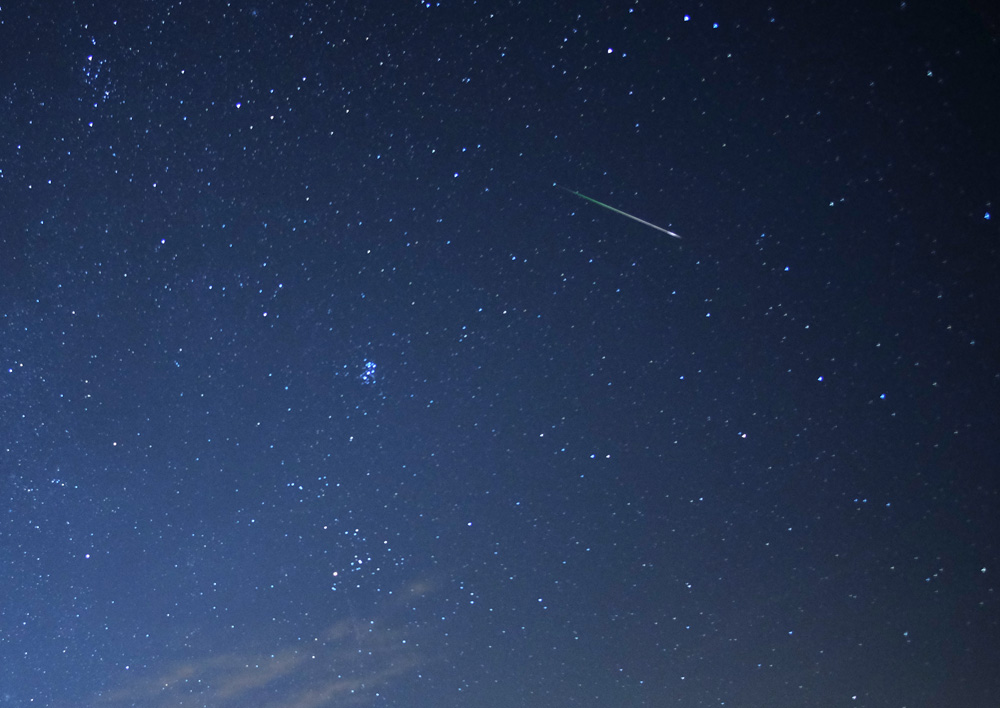 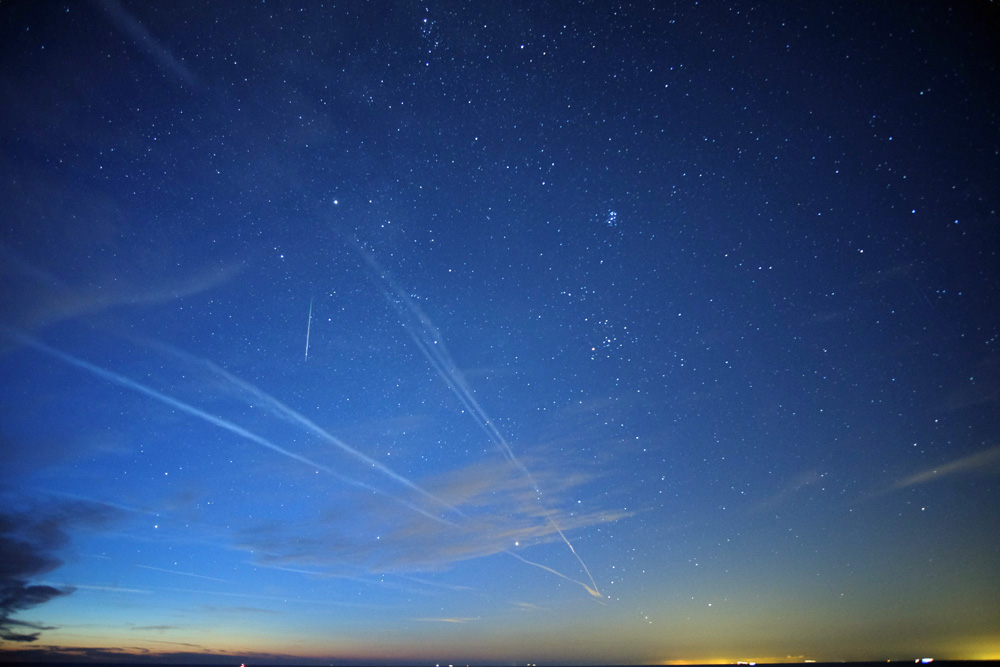