Here, in reverse chronological order, are details of notable meteors and fireballs that were reported during March, April, May and June 2017:

This fireball was reported by Roger Albin (Guernsey) and was visible at around 50 degrees altitude as it descended in his western sky.

Roger was driving at the time, so his view of the fireball was somewhat limited. However, he noted it to be green in colour and having a duration of 1-2 seconds. He estimated it to be of magnitude -7. No fragmentation was seen. 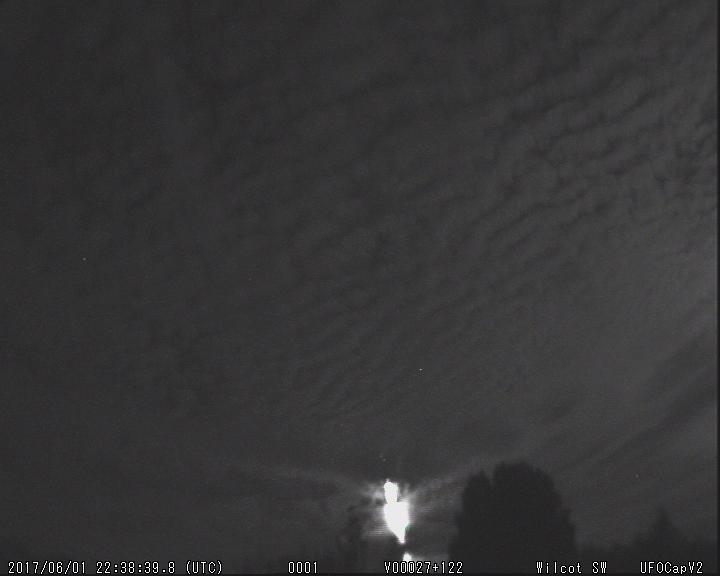 This fireball was reported by Helen Bos (Moreton in Marsh, Gloucs).

It was also imaged through cloud  by Richard Fleet (Wilcot, Hants) via his south west facing camera.

Helen saw the fireball in her SSW sky at an altitude of about 55 degrees and described its colours as orange and light yellow.

As can be seen in the accompanying image, the fireball was rather low in the sky from Richard’s location – although the start of the fireball could have been obscured by cloud. 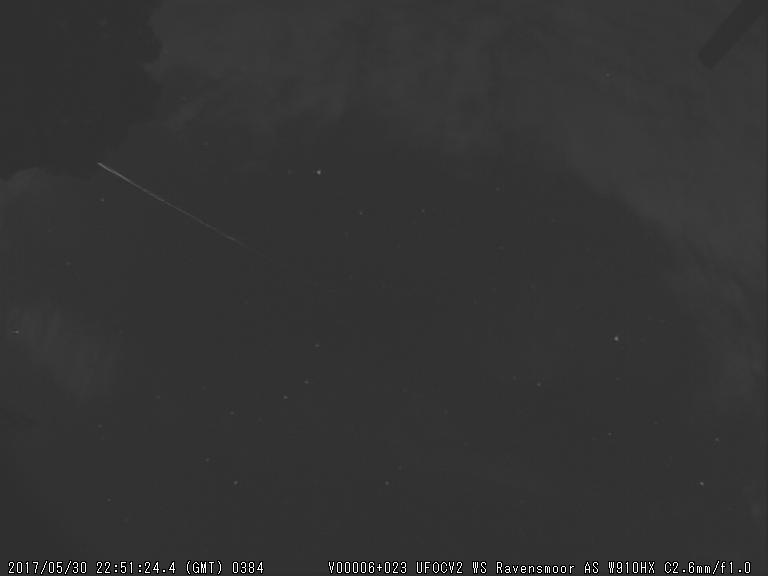 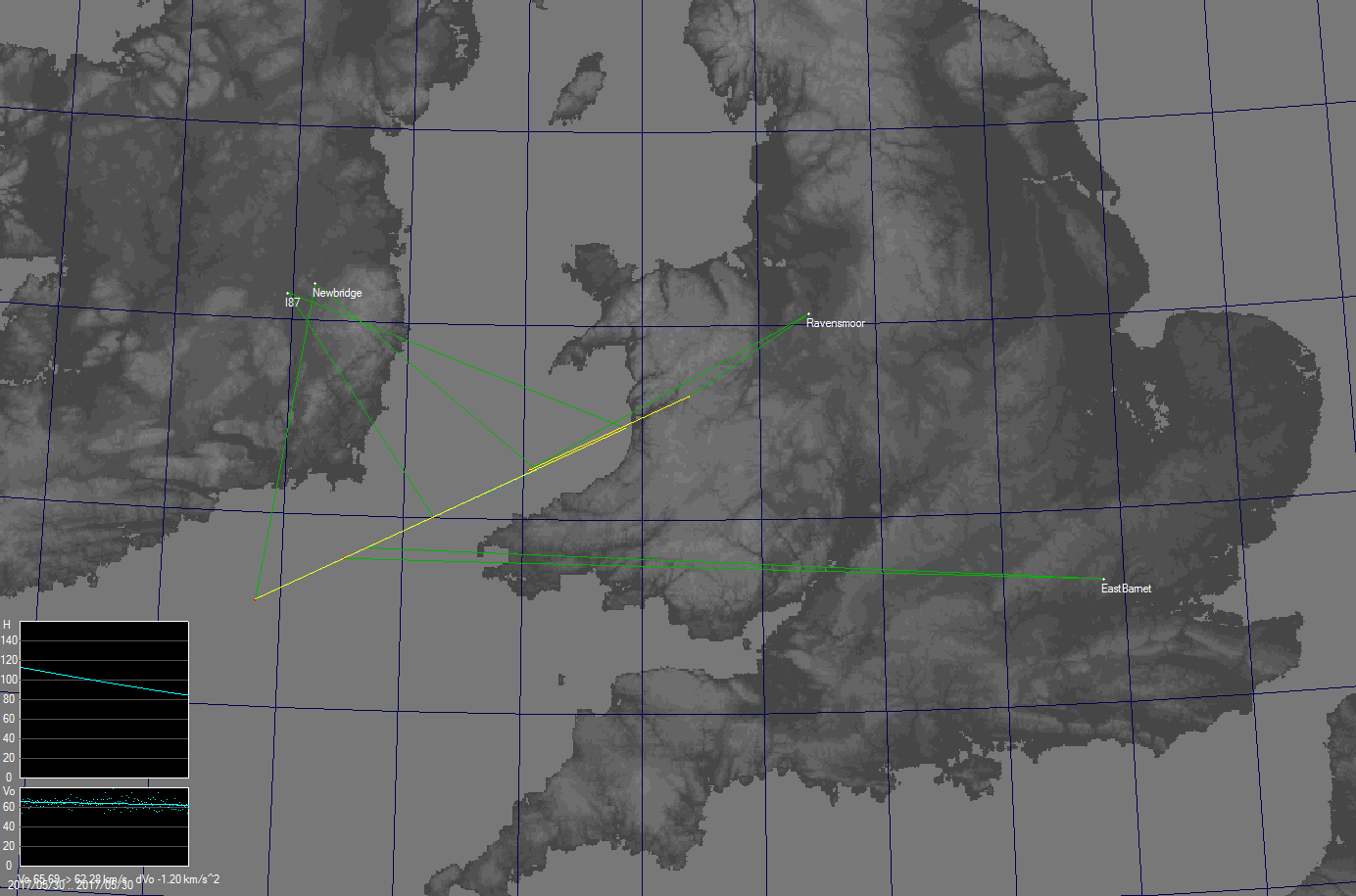 This fireball was seen visually by John Griffin(Salthill, Co Galway, Ireland) and was imaged by William Stewart (Ravensmoor, Cheshire) of the NEMETODE camera network (http://nemetode.org).

John saw the fireball in his south eastern sky at an altitude between 50 and 60 degrees, travelling from around azimuth 119 to azimuth 146.

He described its colours as red and white and having a duration of 1-2 seconds. No fragmentation was seen.

William’s camera is angled so as to point at the same part of the upper atmosphere as another camera in Leeds. This is why the constellations in his accompanying image are at unusual angles (Ursa Major can be seen left of lower centre)

Three other members of the NEMETODE network (one in London, two in Ireland) also imaged  parts of the fireball’s trajectory and William has analysed the images and determined the ground track, almost 240 km in length, over Cardigan Bay and the southern Irish Sea, shown here. The analysis also showed that the entry angle into the Earth’s atmosphere was rather low – around 9 degrees. 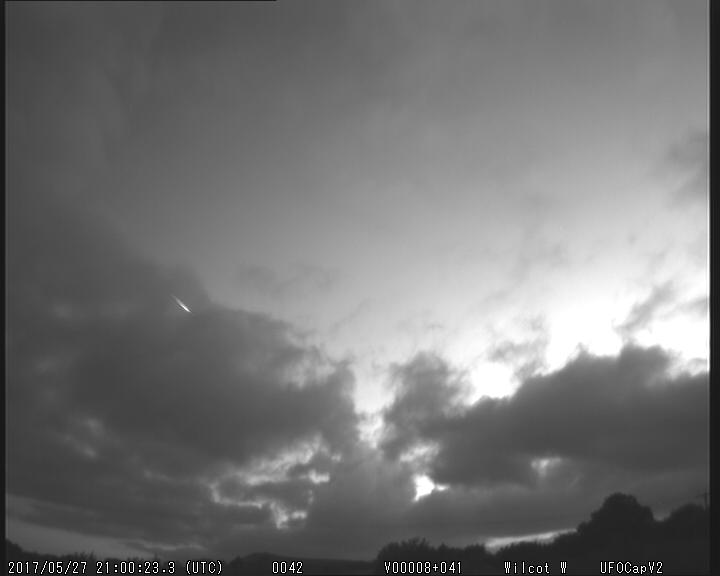 This fireball, in the evening twilight, was seen by a number of witnesses across southern England and Wales, with observer locations ranging from St davids in the west to Norfolk in the east and up to Leicester in the midlands. Although the fireball was seen by witnesses on the south coast of England, there were no reports from northern France.

It was also imaged,  as seen here, through cloud by Richard Fleet (Wilcot, Hants), via his west facing camera.

Obviously, the fireball would have appeared much more striking from locations from which it wasn’t dimmed by cloud (and if it had appeared when the sky was darker) 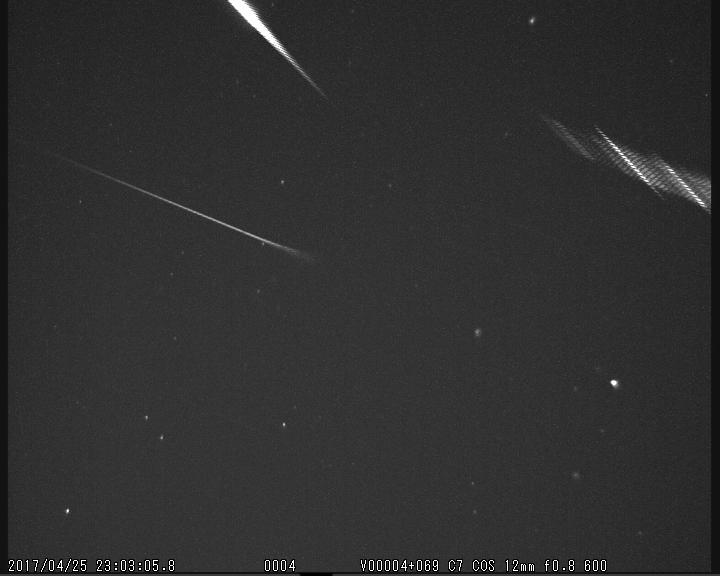 Additional reports of this fireball can be found  here

During the night of April 25-26, Bill Ward captured this image of a Lyrid fireball and its first order spectrum at 23:03:05.8 GMT.

By chance, another of Bill’s camera’s captured the second order spectrum.

Regarding this second spectrum, Bill commented

“Not as bright of course but for a video meteor spectrum this is excellent dispersion.”

and, describing the spectrum, he adds

“A beautifully resolved set of Fe lines around the bright green Mg line.” 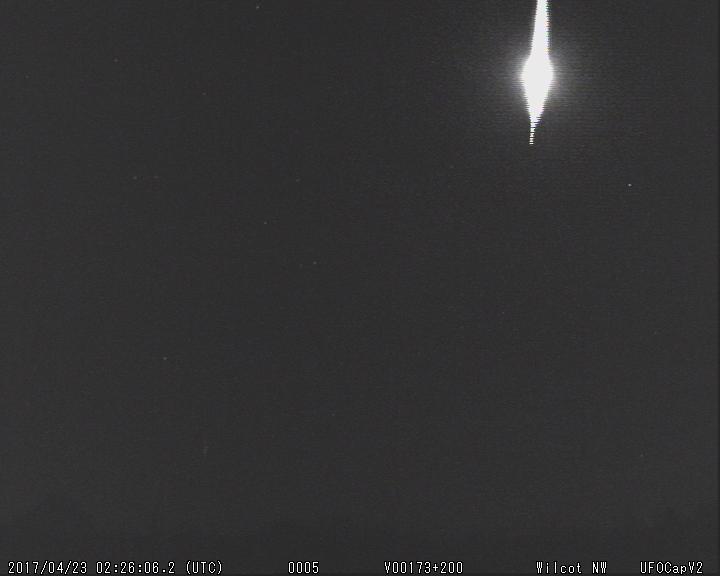 However, Richard Fleet (Wilcot) did manage to capture this image of a the final stages of a fireball at 02:26:02 UT on the morning of April 23rd, around 14 hours after the predicted time of Lyrid maximum via his north west facing camera.

The start of the fireball was also captured by his north facing camera. 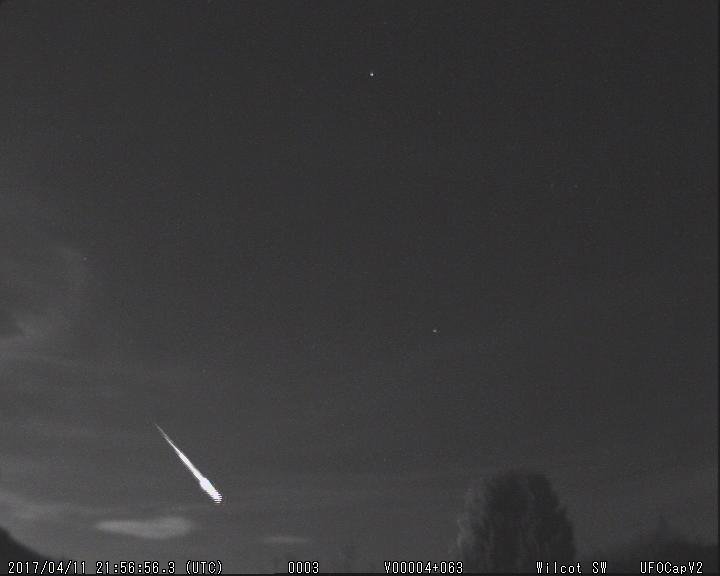 In this case, there seem to have been no visual eyewitnesses of the event (or at least none that reported it!)

Meteor imaging is always a compromise between maximising the number of meteors recorded against the level of detail recorded for each meteor.

A fish-eye lens, by covering the whole sky can capture more bright meteors, but is of rather limited use for positional work or for studying individual meteors in detail.

A longer focal lens results in a smaller field of view and so misses those meteors that appear outside of the field of view, but records the path and light curve of each meteor in more detail.

Bill Ward reports, via Twitter, that he has recently brought into operation three cameras (see below left) with longer focus lenses, two of 25mm, one of 16mm. They produced their first result (shown below right) late in the evening of April 1st. Bill notes that the image involved shows stars as faint as magnitude 6.8. 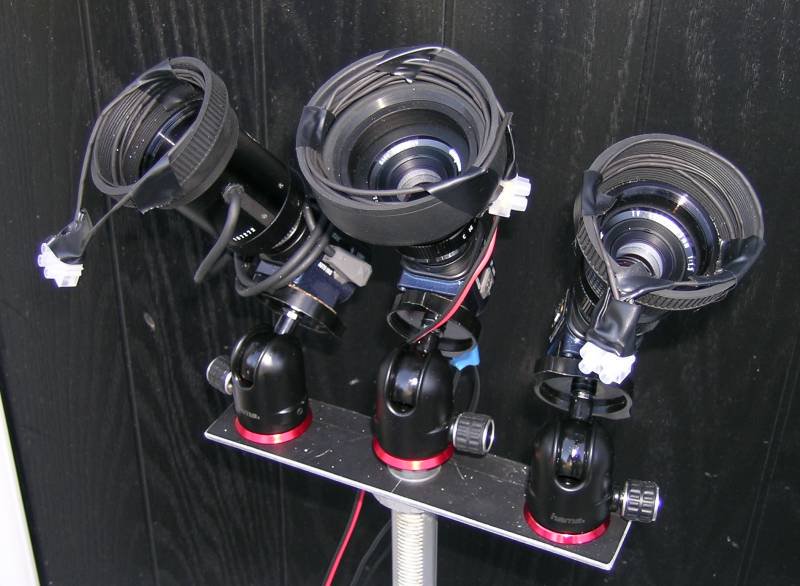 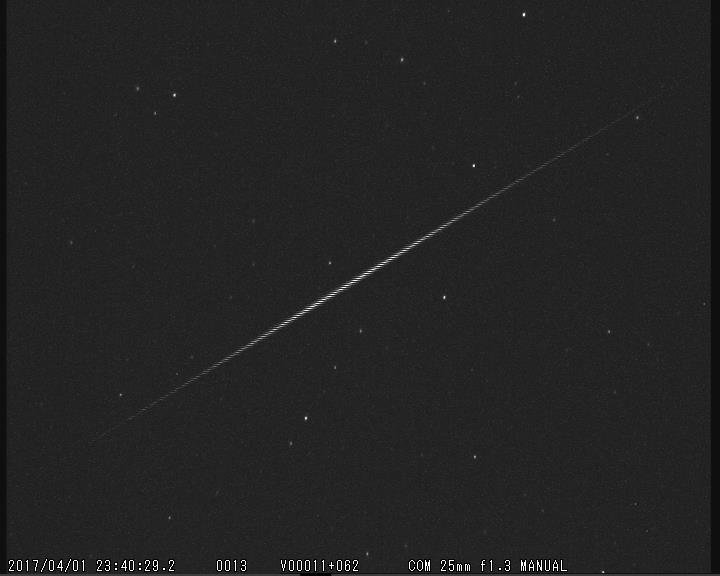 Bill Ward has been experimenting with a narrow field of view lens in order to record videos of unusual “dissolving” meteors in more detail. As Bill puts it, these meteors “positively ooze out of existence“. On March 7th, he captured another such example. By chance, he also captured a “normal” meteor at around the same time.

He has created this video clip which contrast the appearance of the dissolving meteor with that of the normal meteor.

He comments “The trajectory appears to come directly overhead from the NNE and move in a SSW direction. It was not particularly “Fast” but certainly “Bright”.   Unfortunately it was behind patchy clouds and only a couple of reference stars are visible. So cannot get an accurate fix to compute any meaningful data.  The patchy clouds do not help in deciding whether or not the object underwent a series of “Flashes”; typical of “Fragmentation”. I have viewed the video several times and at slow speed; the patchy cover of clouds do make a firm conclusion either way somewhat difficult.”

The IMO-News feed also included a visual report of this fireball from a witness in northern Essex, who estimated that it was of magnitude -4 and reported that it “coasted in from the North East above and parallel with Caph and Gamma in Cassiopeia then burnt out and disappeared in light layered clouds passing just above Bellatrix.” 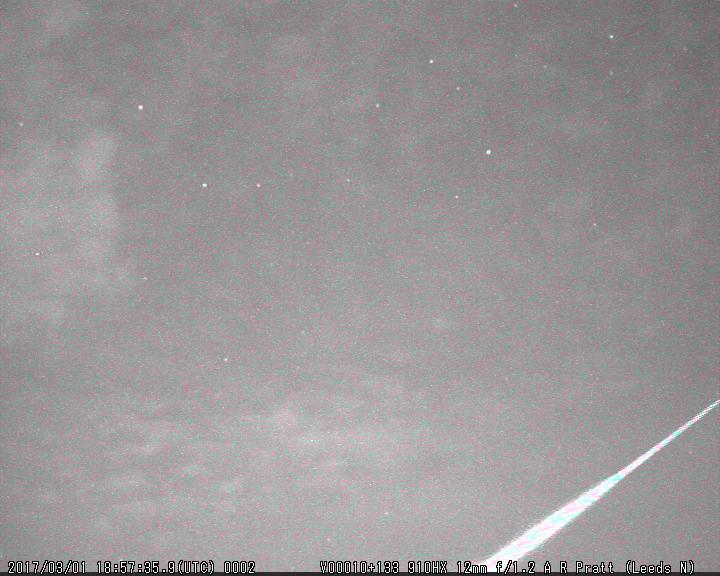 This fireball was reported to the IMO by a number of visual observers from locations as far south as East Yorkshire and Lancashire and as far north as Dunbartonshire and Aberdeenshire.

Observers mention flares and fragmentation, with most reporting a duration of 1-2 seconds. Colours reported included green, yellow and blue.

Detailed of the visual reports can be seen here http://fireballs.imo.net/imo_view/event/2017/834

It was also imaged in part by Alex Pratt (Leeds) and David Anderson (Ayrshire) , two members of the NEMETODE video camera network.

Alex had thinner cloud and his image showing part of the fireball’s path is reproduced here. Alex notes that the brightest flares probably occurred beyond the camera’s field of view.