Here, in reverse chronological order, is a summary of notable meteor activity reported during January 2017:

This fireball, estimated to be of magnitude -6, was reported by Graham McLoughlin (Chorley, Lancs).  The fireball was heading downwards in his WNW sky.  Graham described it as being light yellow in colour, having a duration of 3-4 seconds, and breaking up into a number of red fragments near the end.

There is one other report on the IMO fireball pages that probably ties in with Graham’s fireball. This was reported by an observer in Amble (Northumberland), from where the fireball was seen in the WSW sky.

Stephen estimated to be of magnitude -4, with the fireball being at around 20 deg altitude and descending slightly as it headed from the WNW sky to the western sky.  Denis described it as being white with a golden sparkly tail and from his location it was descending from around 60 deg to 20 deg altitude as it travelled from the NW sky to the SW sky and added “Because of the largeness of the white head, and thickness of the tail, thought it was a firework, but no, as it went from high to low across the sky with no sound, there was no after trail. all disappeared within two seconds. I saw it burn out.” . Mike reports that it was seen by a number of members of the Foredown Tower Astronomers and added “The fireball was very slow, not quite as bright as Venus, which we were looking at at the time and below which the fireball disappeared having moved down in a path parallel to the right-hand stars of the “Square of Pegasus“.

This fireball also appears to have been seen from several other locations. The IMO website lists events event230and event229, which probably both refer to this fireball (the times quoted by the latter are around 15 mins earlier, but the sky positions quoted are similar; discrepancies in times reported for fireball events are not that unusual, as witnesses tend to focus on the details of the fireball itself and it is only when they subsequently report the fireball that they think back and try to remember the time). A third event event226 , separated from these by 12 hours (am/pm confusion?), may also relate to this fireball. The locations covered by these events include Swansea, Plymouth and Godalming (Surrey), plus the Normandy and Brittany area of north west France.

No images of the fireball have been reported, but there is a 26-second image starting at 19:26:10 GMT from the Bayfordbury camera of the Univ of Herts all-sky network  includes a short streak very low in the SW. Although these images frequently contain streaks from aircraft crossing the camera’s field of view, there is no continuation of this streak on the prior r following images.

A review of the individual reports indicates that all witnesses appear to have been to the east of the fireball’s atmospheric trajectory. The start point was possibly over the southern Irish Sea and the fireball then crossed the approaches to the Bristol Channel and English Channel, ending most likely to the west of the Brittany peninsula. 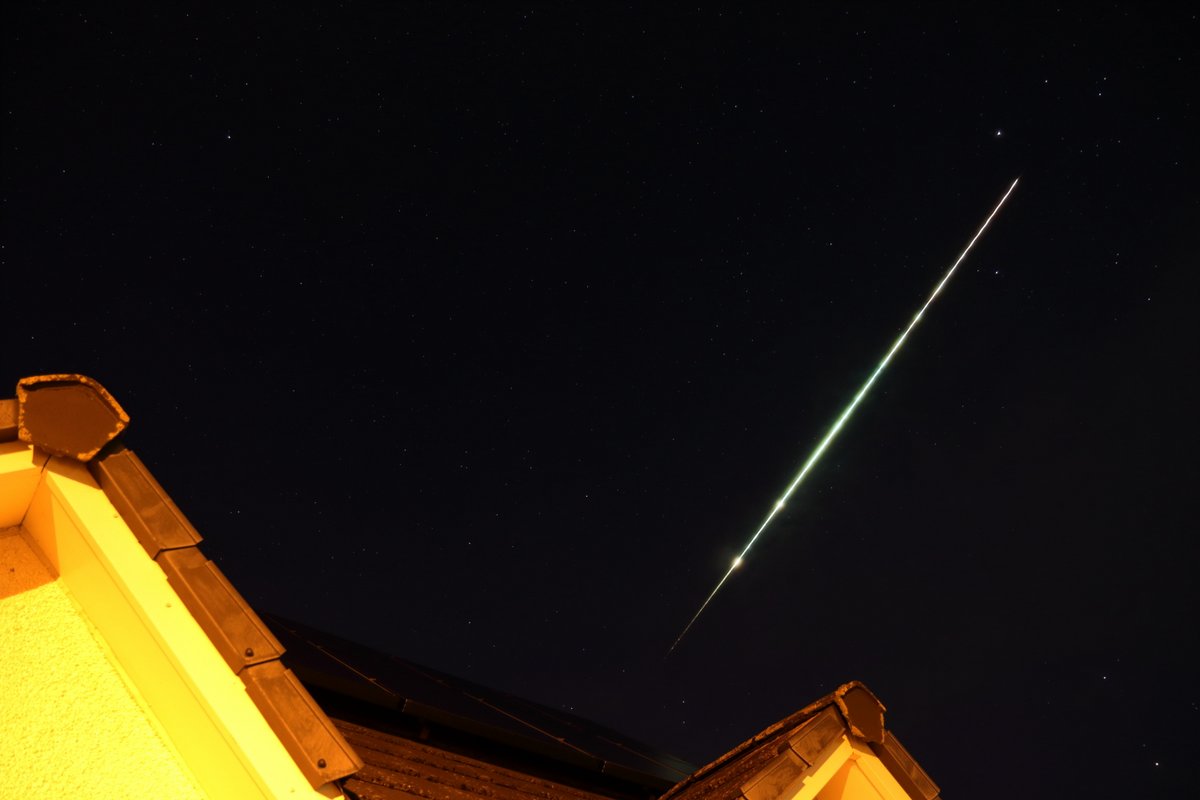 This fireball was reported by Liz Pegg (Chirnside, Berwickshire) and Susan Parr (near Alnwick, Northumberland). An additional report from another observer in Northumberland was also submitted to the IMO.

Susan was driving and only had a limited view of the fireball which appeared in the vicinity of the Plough.

Liz, however, was outdoors imaging the sky in preparation for an Iridium Flare event when, by chance, she captured the accompanying image of the fireball heading downwards from Auriga to Ursa Major.

The camera was imaging the NNE sky, with Capella near the top right, Castor & Pollux at bottom right and the northern ‘forepaw’ of the Great Bear just above the roof near the end of the meteor.

In some ways we are lucky that anyone saw this event as most of the UK was at the time covered by cloud. No images of the event appear to have been captured by the cameras of the NEMETODE or UKMON networks.

This fireball was reported by Kris Fry (Talgarth, Brecon).

Kris was driving at the time and so had a limited view of the sky, but estimated it to be of magnitude -5, of duration 3-4 seconds, and descending from altitude 20 deg to 15 deg  as it travelled from the NW sky to the NNW sky.  The fireball ended behind cloud.