Here, in reverse chronological order, is a summary of notable meteor activity reported during February 2017:

Bill Ward captured spectra of two unusual meteors during the night of Feb 27-28.

Both spectra (middle right of first image, top left of second) were quite faint.

Two features of them were unusual: 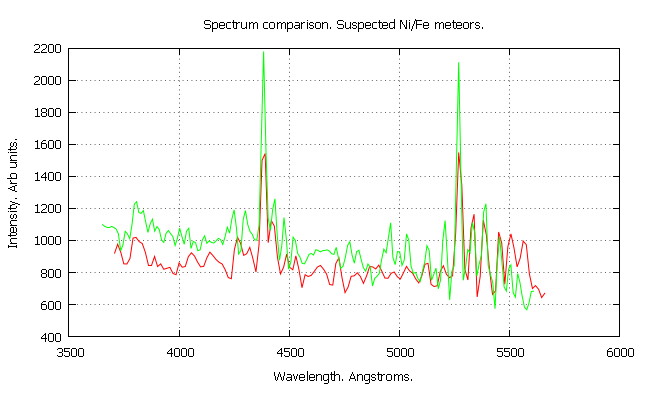 – one is that they were brightest near the start of their paths and thn fainter towards the end – the opposite of the behaviour of most meteors.

– the other is that their composition seems to have been somewhat unusual, with the spectra showing bright emission lines from Iron and Nickel.

As the accompanying intensity plot of the blue-green end of the spectra of both meteors shows, their compositions were quite similar.

Meteors with this composition are quite rare and Bill comments that it was remarkable to capture spectra of two in the same night. 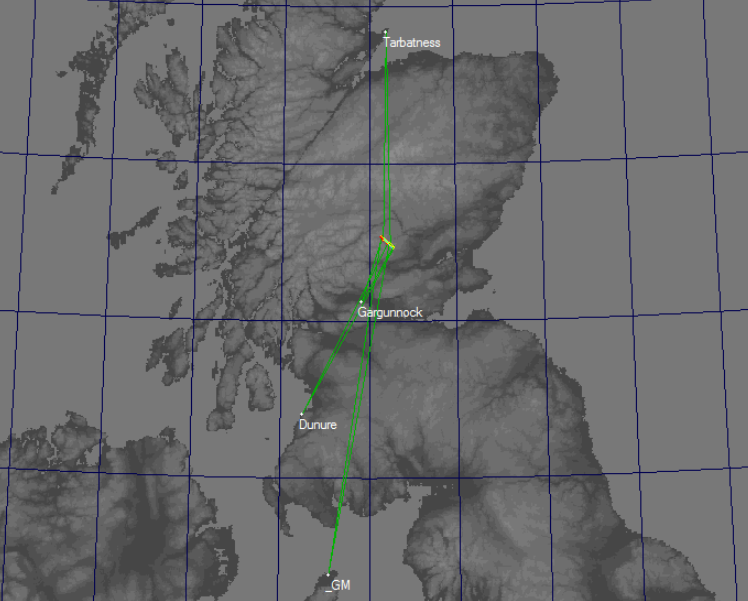 This fireball was reported by Natalie Denholm(Dalkeith, SE Scotland). Natalie estimated its duration to be 3-4 seconds and recorded its colours as orange, yellow and white. The fireball was descending in her NW sky. She also describes it fragmenting “like sparks“.

The fireball was also imaged by four cameras of the NEMETODE network( http://nemetode.org ), ranging from Tarbatness in the north to the Isle of Man in the south. These tied down its time of appearance to 22:11:35 GMT.

They have analysed the images and, taking into account the different sky directions seen from each location, have triangulated its atmospheric trajectory.

The resulting (short) ground track, over Perthshire, can be seen in the accompanying map. The fireball started at around 90km altitude and ended at around 40 km altitude. The fireball was relatively slow moving, having a geocentric velocity of about 15km/s.

Visual reports of this fireball were also reported to the IMO by witnesses in Kames (Argyll), Bangot (N Ireland) and Rodsley (Derbyshire).

This fireball was reported by Russ Crooks (Lutterworth, Leicestershire). Russ described it as being “Like a shooting star which then exploded as it moved, then continued and flashed again, second time more brightly“.  Russ estimated its duration to be 1-2 seconds and recorded its colour as light yellow. He described the train it left behind as being like a “bright straight line with two bright lights left from two bright flares which lasted for a second, maybe two.”

The fireball was also imaged by cameras at two of the stations of the NEMETODE network, one in East Yorkshire and one in Leeds.

The accompanying image shows part of the fireball’s track near the top edge of the SE facing camera of Alex Pratt (Leeds). Alex comments that a flash recorded on his NW facing camera probably also coincides with one of the flares.

The IMO fireball reports page includes a visual report from a witness in Crewe which, although reporting a time 20 minutes earlier, does have a description that would tie in with this fireball. 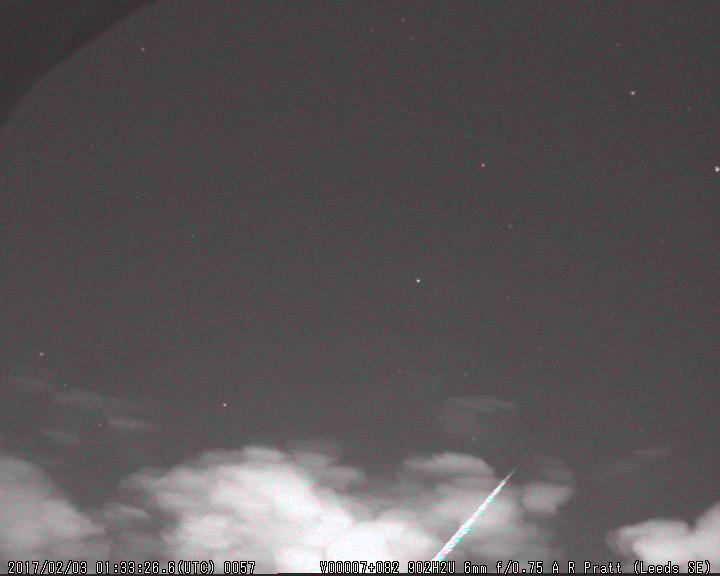 This fireball was imaged by Alex Pratt (Leeds) and William Stewart (Ravensmoor) of the NEMETODE network. William also captured a partial spectrum.

As can be seen in the the accompanying image, the fireball was low in the sky, below Leo, from Alex’s location.

Tringulation of the two images, carried out by Alex, showed the fireball’s atmospheric trajectory to have been over the East Midlands.

The fireball was relatively slow moving, with its speed being below 30 km/s. It was descending from around 90km altitude to around 55km latitude. However, Alex notes that the end point of the fireball was outside the cameras’ fields of view and so it may well have descended further to a lower altitude.

The ground path is marked on Alex’s map, reproduced below: 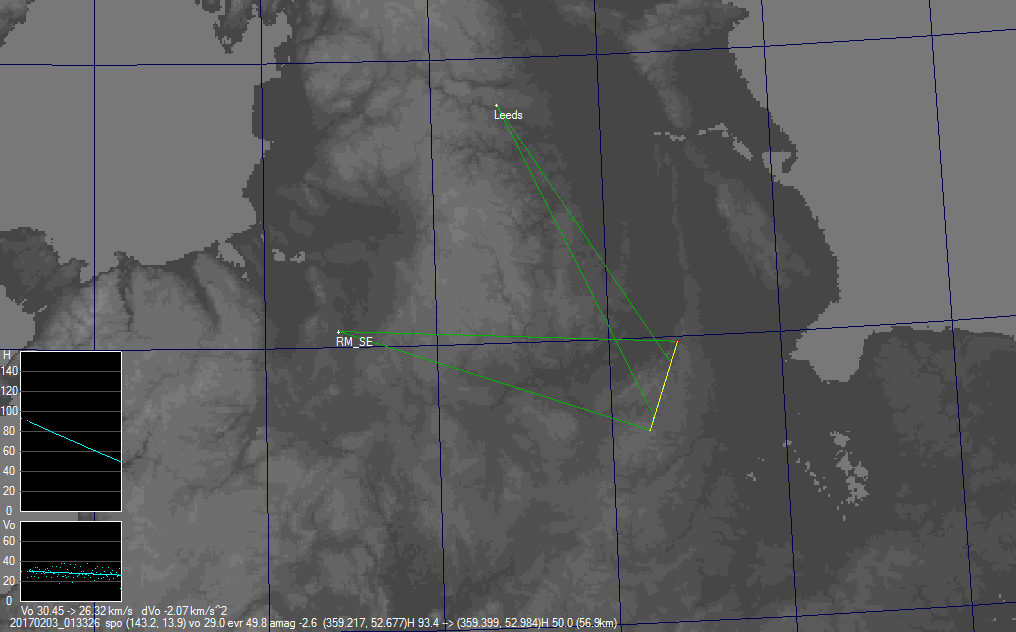