Here, in reverse chronological order, are details of interesting meteors and fireballs reported during October 2016:

Michael Franks (London) reported a fireball of about magnitude -4 and duration 1-2 seconds visible in his southern sky. The fireball had a short path, which might raise suspicions that an iridium flare or other satellite might be involved. However, a check of predictions on the Heaven’s Above website http://www.heavens-above.com showed that no bright events were due to be seen from Michael’s location at around that time.

The first news of this fireball, probably around magnitude -3 and flaring to mag -5, came via an email from Stephen Bosley who had imaged it from Hampshire via a NE facing video camera that he operates for UKMON. The duration of the fireball was 4.6 seconds.

Subsequent checks found that it had also been recorded by two of the cameras ( Bayfordbury and  Hemel ) of the University of Hertfordshire all-sky network.

Stan Armstrong (High Wycombe) also reports that he captured an image of the later part of the fireball, including the terminal flare, near his zenith.

The sky tracks recorded were not consistent with it belong to either the Orionid or Taurid meteor showers. Hence it was part of the sporadic background.

Unfortunately no visual reports of the fireball have come to light so far. 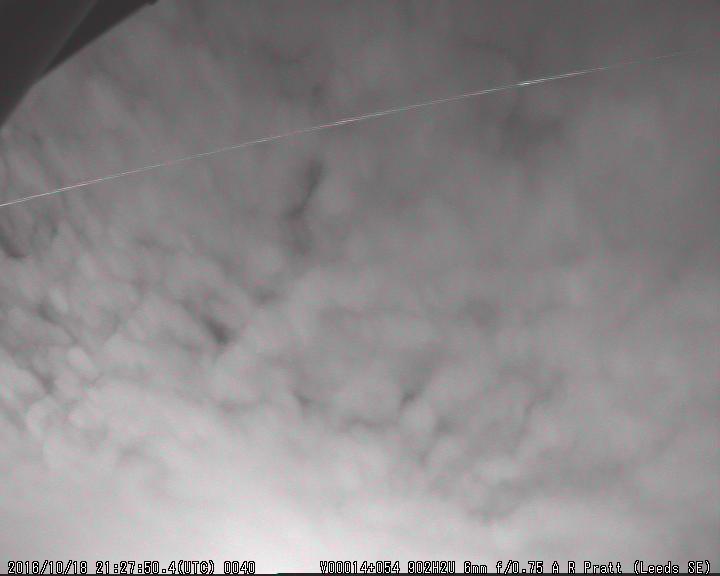 This bright meteor was imaged through cloud by Alex Pratt (Leeds) on his SE facing video camera.

The meteor took approx 2.1 seconds to cross the field of view of the camera.

Despite the image showing no stars, Alex was able to make use of this image because the camera is pointing in a known fixed direction.

Alex combined the path seen from Leeds with that in an image secured by another NEMETODE member, Ray Turner (Skirlaugh, East Yorks), to determine the trajectory shown on the accompanying map. 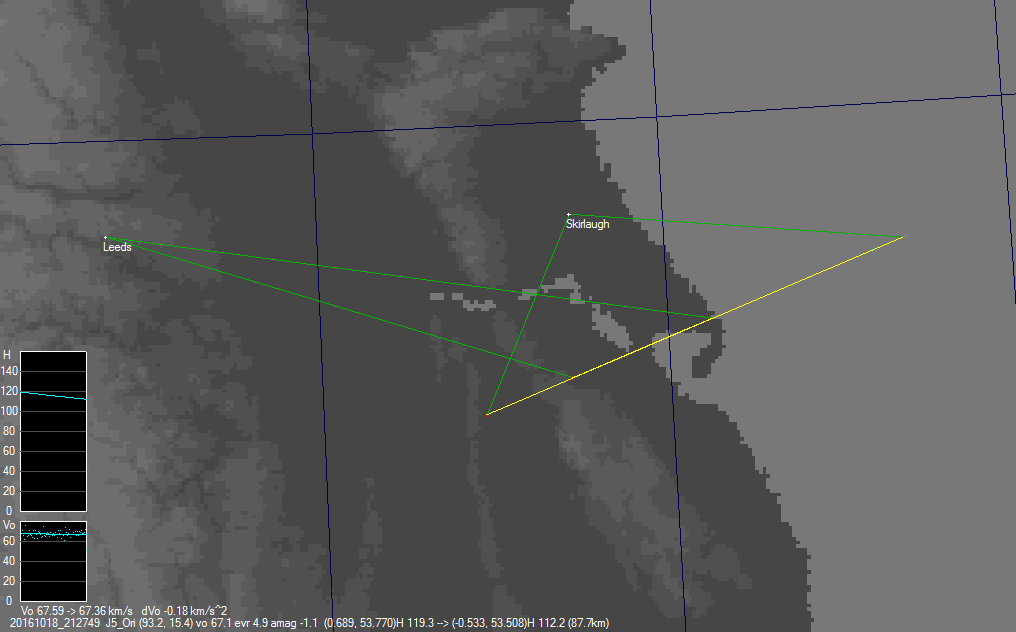 The analysis showed that the meteor retained most of its altitude and speed during its passage of a few seconds through the atmosphere.

The trajectory was indeed rather shallow, with the meteor descending only 7km over its ground track of 88km, starting over the North Sea, crossing the Humber estuary and ending over north west Lincolnshire

The analysis also indicated that it was an Orionid meteor on a grazing trajectory – the Orionid radiant was low in the ENE, having risen less than 20 minutes earlier. 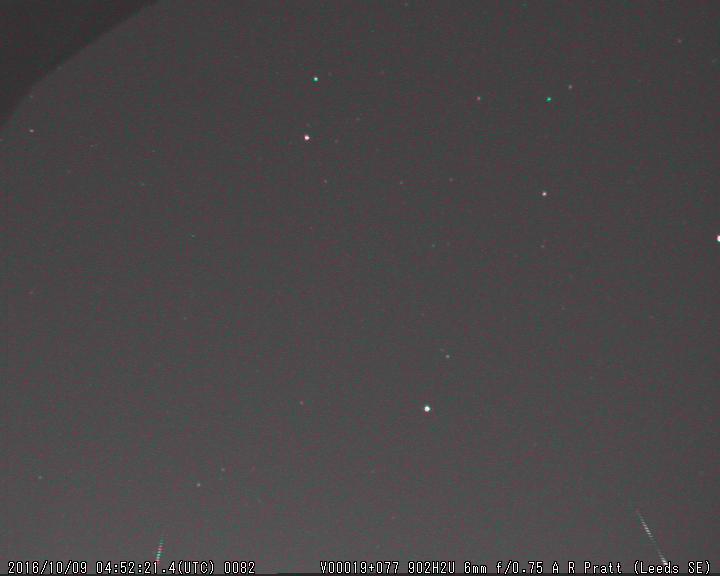 Alex Pratt (Leeds) captured this image of a meteor (at the bottom right of the image) which showed a double peak in brightness, via his SE facing video camera.

The same meteor was also imaged by another NEMETODE member, Nick James (Chelmsford, Essex), via his NW facing camera.

Simultaneous with the double peaked meteor, Alex’s image shows another meteor near the bottom left.

This meteor would have been too far south to be imaged by Bill Ward (Kilwinning, nr Glasgow), but Bill has mentioned that he did image several similar meteors that night.. 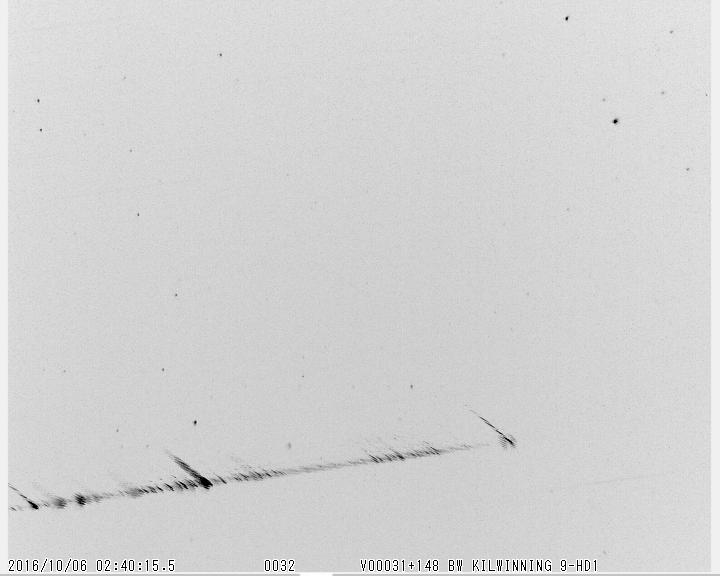 Bill Ward (Kilwinning) captured a spectrum of this fireball.

The image mostly captured the blue and green parts of the spectrum. The colourised synthetic spectrum appears below.

“This is essentially the spectrum of the flare at the end of the fireball. A lot of the lines seems to “flash” on for only one or two frames (~1/25 to 1/12.5 of a second, the timing is a good thing about the accurate video frame clocks of the Watecs). These are rapid events!

Note, spectrum is not instrument corrected.
This was a second order spectrum, I’ve removed some of the lines that I could identify as overlapping from the first order. There are components which are completely overlying the bright sharp lines so I had to leave these but I don’t think it detracts from the detail.  You can clearly see all the sharp iron lines (and others) in the spectrum.” 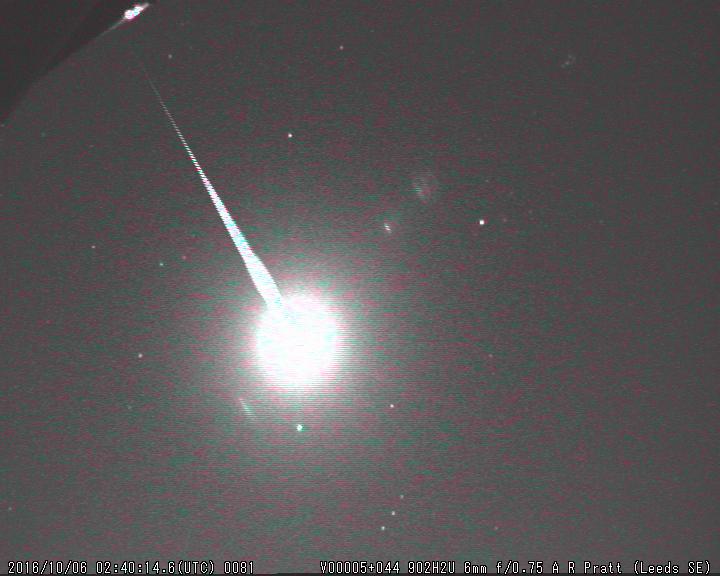 The fireball was also imaged by the automated video cameras of Alex Pratt (Leeds) and William Stewart(Cheshire). The images suggested that it was of mag -6 or mag -7

An analysis of the images by Alex suggests a possible link to the October Camelopardalid minor meteor shower.

If it was indeed related to this shower then it would almost certainly be the first time that a spectrum of a member of this meteor shower has been captured.

The analysis also indicated that the ground path of the meteor was over western Lincolnshire and that it was heading in a roughly SSW direction. 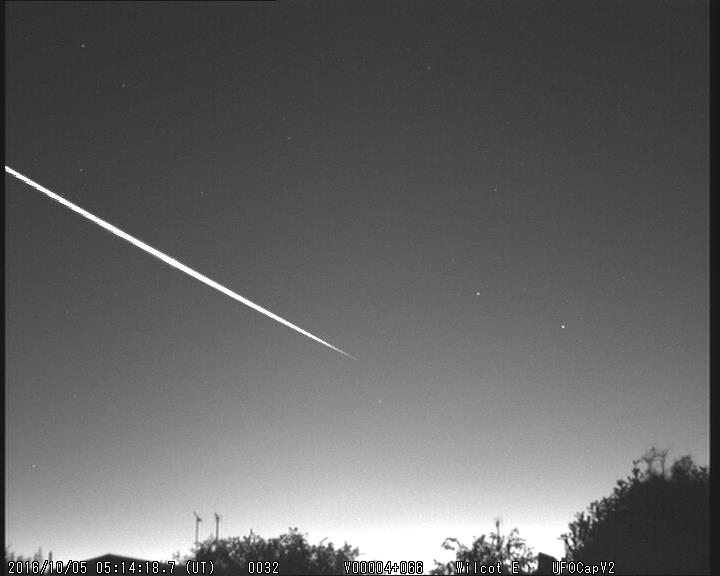 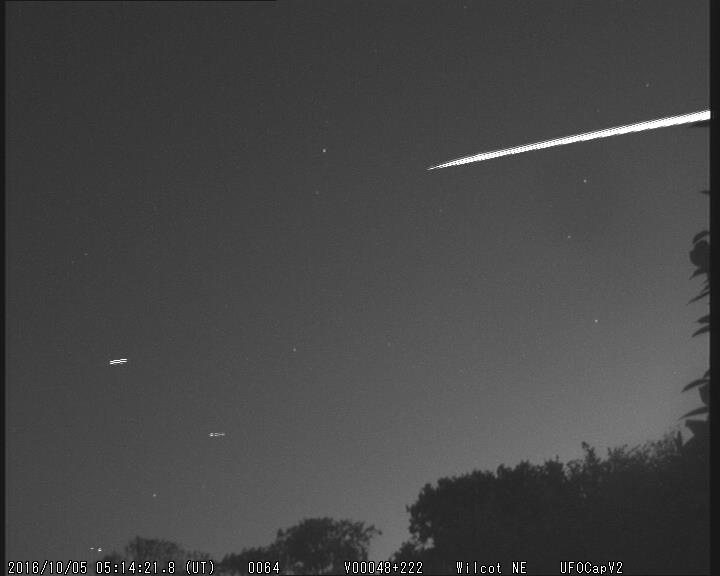 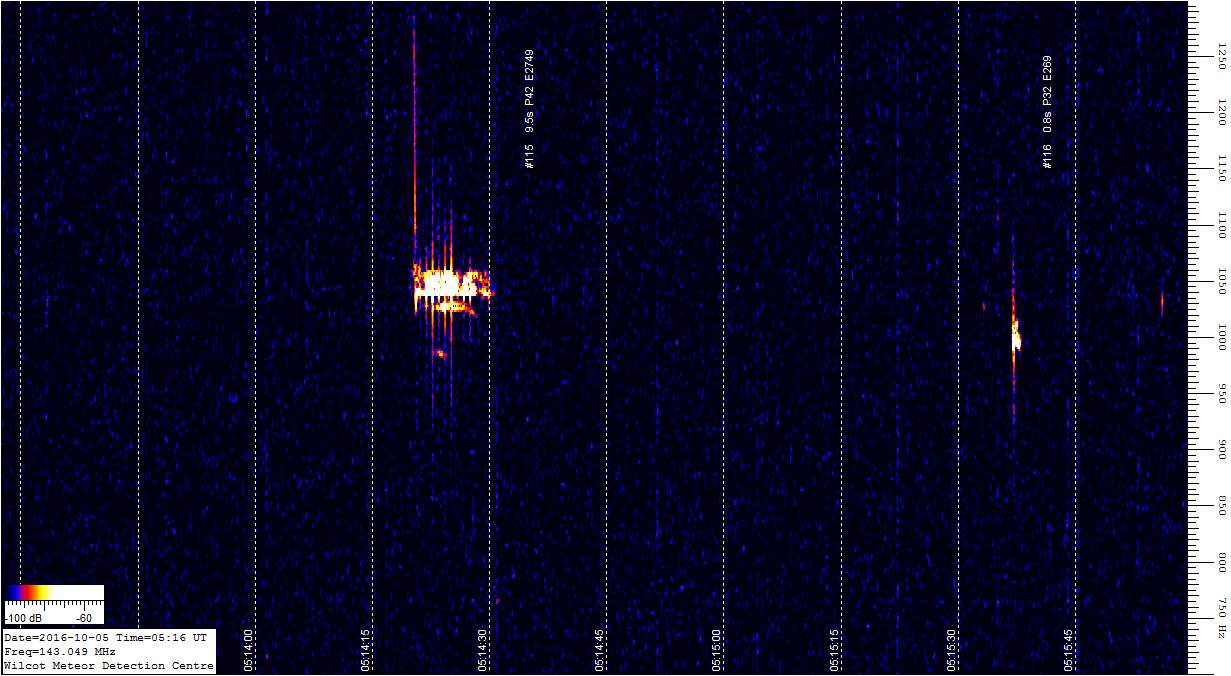 This long duration slow moving fireball appeared during the morning twilight. It was imaged by Richard Fleet (Wilcot, Hants) on both his E and NE facing cameras as it headed in a north westerly direction. He also detected a radio echo from GRAVES. Nick James (Chelmsford) of the NEMETODE network also captured images of the fireball on two different cameras.

The fireball was also seen visually by Alan Lorrain (Basingstoke, who estimated it to be mag -5 or mag -6. Stan Armstrong (High Wycombe) also reports a possible sighting. Unfortunately, cloudy skies hid the fireball for observers further north, with both Alex Pratt (Leeds) and William Stewart (Cheshire) reporting that skies were overcast at their locations.

A bright “meteor”, probably around mag -3, was reported by Philip Denyer (Hornchurch) heading from his southern sky to his eastern sky. Philip reports that it was of duration 3-4 seconds, was gold/yellow in colour and split into two about half way along its path with smaller pieces seeming to fly off. The end of its path was hidden behind a tree and cloud.

Richard Fleet (Wilcot, Hants) captured the event on  this video

Many other reports of this object can be found here on the IMO website.

It is believed that this event was actually a satellite re-entry, with the satellite involved being CubeSat Flock 2B 2 (NORAD 40951) and the ground track of the event starting near Brighton and heading east . More details can be found here