Here, in reverse chronological order, is a summary of reports received about notable meteor and fireball activity during November: 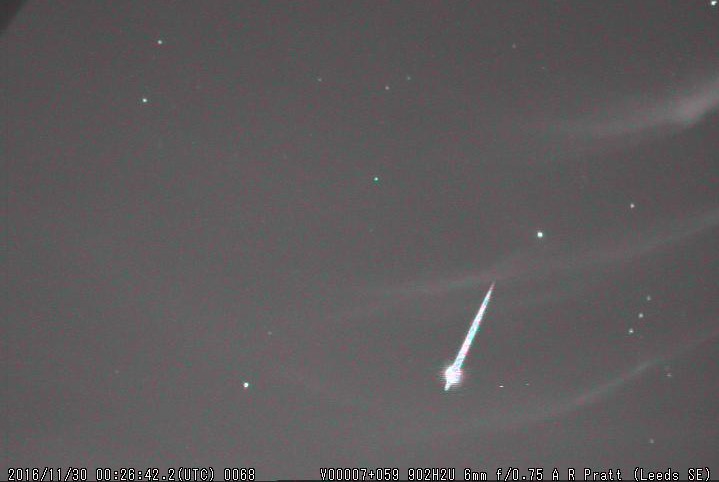 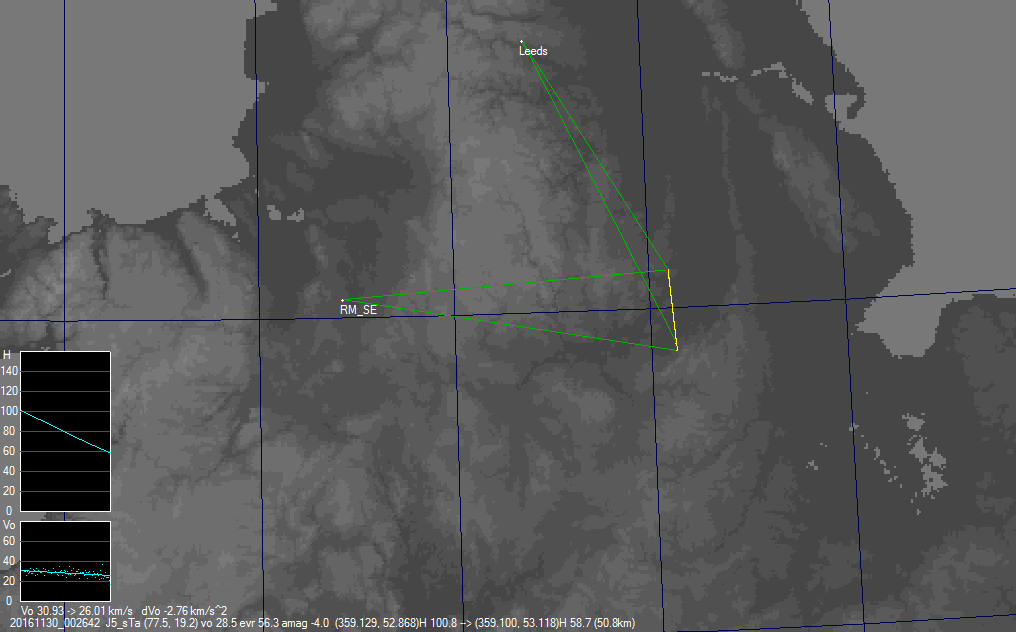 This fireball was imaged by the video cameras of William Stewart (Ravensmoor, Cheshire) and Alex Pratt (Leeds). Alex’s image is shown here, along with a map showing the ground track over the east midlands, as determined by Alex from the two video records. The software used reported that the fireball was of magnitude -4 and was a southern Taurid.

William also captured a spectrum of the fireball

This fireball was reported by Josh Hughes (Old Buckenham, Norfolk). Josh described it as being of mag -5, having a duration of 3-4 sec and being orange yellow & white in colour. It was descending (15deg to 10deg) in his NW sky.

Analysis of the witness reports show that it travelled northwards from central Ireland and ended just to the north of the coast of Northern Ireland.

This fireball was reported by Olivia McConaghy (Newry, N Ireland). She described it as being orange in colour and having a duration of 3-4 seconds. It was visible in her NNE Sky, moving left to right and descending slightly in altitude (19deg to 15deg).

This fireball, probably around mag -5 and of duration around 3 seconds, was reported by Kevin Boyle (Stoke on Trent) and Graham McLaughlin (Brindle, Lancs). There were also reports on-line from witnesses in Northamptonshire and County Down. From Kevin’s location, the fireball was travelling from Cygnus towards the western horizon, whereas from Graham’s location it was seen in the south western sky.

Kevin commented that its path was consistent with it being from the Taurid meteor shower. He also described it breaking up into a number of “beads”.  Graham noted that it ended with a terminal flare. Both observers described it as being white in colour. 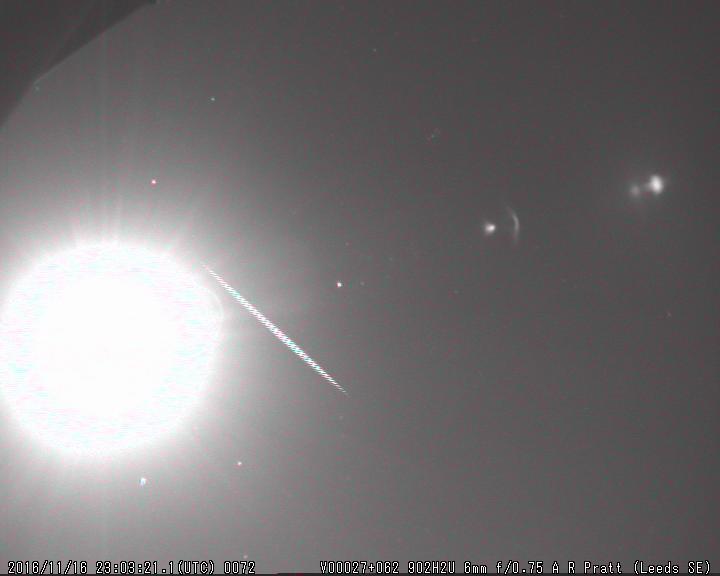 The presence of a bright moon in the sky is a major deterrent for visual observers. No so for video camera operators, as these two images captured by Alex Pratt show.

Both images were captured during the night of Nov 16-17, the night before Leonid maximum.

The first image shows a bright meteor, at 23:03 UT on Nov 16th, whose path across the sky passed close to the location of the Moon.

The second image shows another bright meteor, at 01:15 UT on Nov 17th, whose path actually went across the position of the Moon.

Both meteors were most likely sporadics.

Moonlight circumstances for the 2016 Leonid maximum were rather poor. Although we were several days past Full Moon, the Moon had in the intervening days moved closer to Leo and would already be in the sky by the time that the Leonid radiant rose in the late evening. 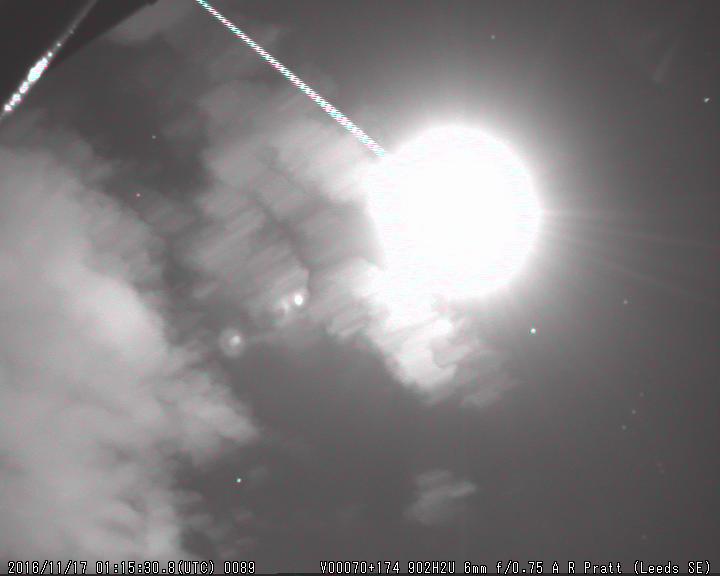 The bright Moon would brighten the sky background, making it difficult to see  the fainter meteors. Hence less meteors would be visible, making observing a challenge for visual observers and certainly not very rewarding. Seeing less meteors also makes it harder to maintain your alertness. Any visual observers who did observe would certainly not try to observe the part of the sky containing the Moon.

Automated video cameras do not “care” about rates and do not have “alertness” issues. They simply record whatever passes through their field of view.

The presence of the Moon in the camera’s field of view is not a serious issue either – it just appears as a rather overexposed image, but bright meteors passing nearby are still visible. 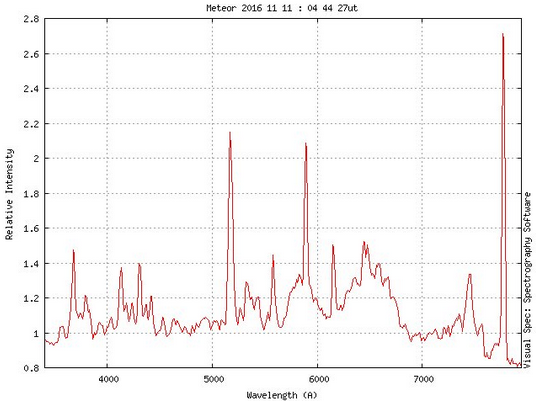 Bill Ward (Kilwinning) captured a spectrum of a bright meteor.

The intensity plot of the spectrum is shown to the right.

Although the lines that Bill mentions are stronger than in many other meteors, the three strongest emission lines in the plot are the (usual) lines of Magnesium (green), Sodium (yellow-orange) and Oxygen (near-infrared)

The synthetic spectrum is shown below:

Tony Moss (Downham Market) report a fireball in his eastern sky that appeared within a few minutes of 22:10 UT.

The fireball was possibly as bright as magnitude -7, had a duration of 1-2 seconds, was red in colour and ended with a terminal flare. It travelled from azimuth 108 to azimuth 069, descending about 20 degrees in altitude as it did so. This path suggests that it may have been related to the Taurid meteor shower, which has a reputation for producing a good number of bright flaring meteors.

Bill Ward (Kilwinning) captured a video clip of an unusual meteor which appeared to separate into two parts.

You can view the video clip here https://youtu.be/YrxxiWbe40Q

David Scanlan reported a fireball heading SSE through Orion and of magnitude -6 or -7.

The fireball was probably too far south to be picked up by the Univ of Herts cameras in Hemel & Bayfordbury. It would have been ideally placed for their Isle of Wight camera, but that seems to have had a faultduring October and November.