Here, in reverse chronological order, are details of fireballs reported to the section during these months: 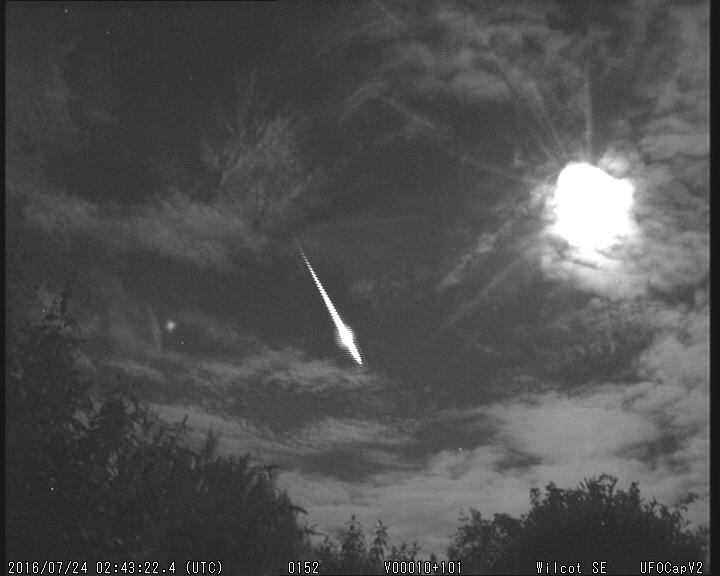 Richard Fleet captured this picturesque image of a bright meteor through a well placed cloud break. The bright object on the right of the image is the Moon (through cloud).

Richard notes that the software being used identified the meteor as an early Perseid.

This capture highlights one of the benefits of automated video imaging.

It would have been very unlikely that a visual observer would have been observing at the time, given the bright moonlight and extensive cloud. Video cameras, however, are less fussy about the observing conditions and can capture meteor images through short lived cloud breaks.

Alan Mark (Middlesbrough) reported this magnitude -4 fireball descending in his southern sky from approx 60 deg altitude to 15 deg altitude. It was of duration 7-8 seconds, white in colour, and left a train which persisted for 2 seconds.

Alan’s report probably also ties in with a fireball seen in the NE sky from Worcester at approx the same time. 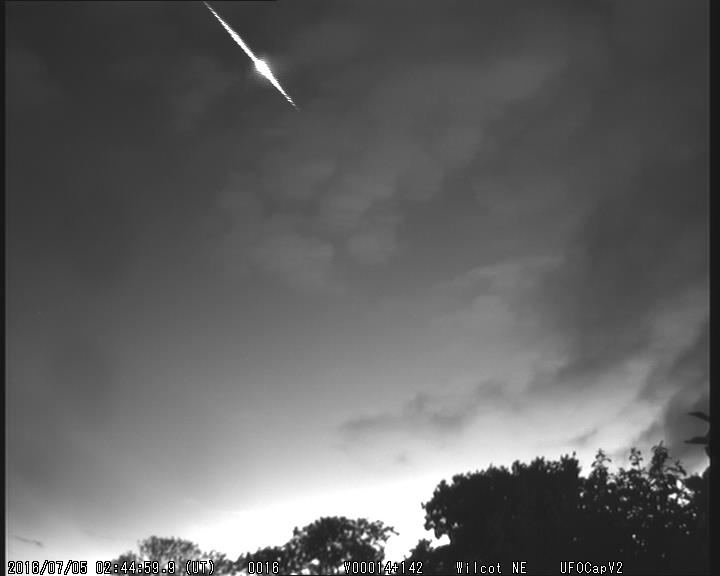 Kevin Boyle (Stoke on Trent) reported a fireball of magnitude -5, while checking the sky for Noctilucent cloud

Kevin’s description was “A bright meteor was observed to track southwards from its inception within the twilight arch, right across the sky, ending somewhere near Aquila, a track covering, at least 9/10ths of the sky. It was green biased in colour and disappeared briefly behind cloud though it was still visible through the cloud itself with an aureole appearing around it. It was at its brightest around the zenith (ideal), best estimate, bright as Venus but cloud prevented more accurate estimate of magnitude but I don’t think it was that much brighter.  The meteor broke into two pieces before it faded somewhere near Aquila.”

Despite appearing in the early hours of the morning, this fireball seems to have been quite widely seen, with many reports being submitted to the IMO: http://fireballs.imo.net/imo_view/event/2016/2188 .  Reports were submitted from as far north as Cumbria and Teeside and from as far south as London. 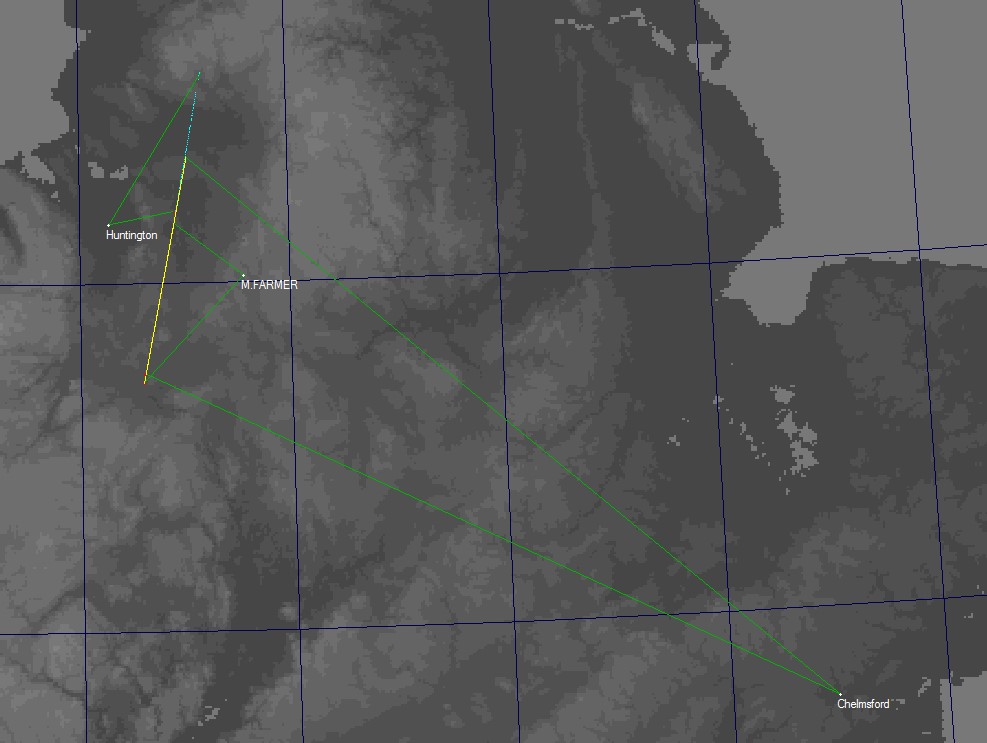 William Stewart reports that the fireball was imaged by several cameras in the NEMETODE network http://nemetode.org/index.html

A video clip, captured from Huntington in Cheshire by Jon Jones, showing the fireball through cloud can be viewed here

Analysis of the various video captures identified this ground track , with the fireball heading SSW over Lancashire and Cheshire and terminating at an altitude just below 40km.

These captures also tied down the time of the fireball more precisely to 02:02:26 GMT.

The fireball was identified as being a sporadic.

This possible fireball, of duration 3-4 seconds, was reported by Marianne Hergelius (Sunderland). She saw it through a sloping NE facing roof window and described it as being pale yellow in colour. Although the limited view means that it is not possible to be certain that a fireball was involved, the time of night would almost certainly rule out this being a sky lantern. 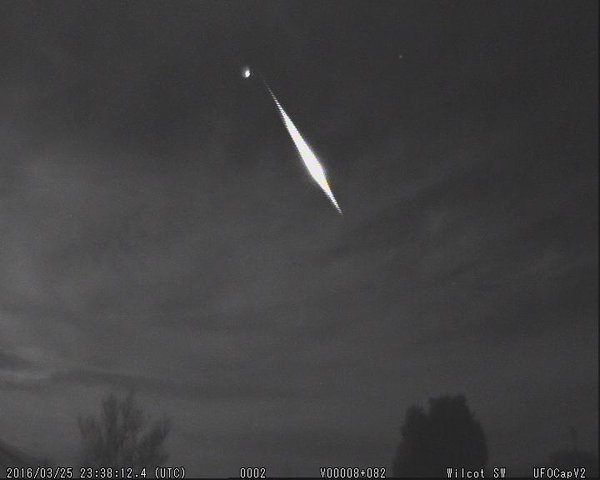 This fireball appeared only 33 minutes after a spectacular fireball was seen at 23:05 GMT from Belgium, the Netherlands and some locations in eastern England, for  which a good number of reports of were submitted to the IMO (see here ) and to Armagh Observatory and for which an analysis was carried out by UKMON (see here ). Bearing in mind that fireball times reported by visual observers often show a large spread (sometimes as much as an hour either side of the true time!), there is some uncertainty as to whether reports from around this thime refer to one fireball or the other. It does seem likely that most reports on these sites do refer to the earlier fireball. One report, however, from a witness in Cambridge who reported a fireball of duration 3-4 sec in the south western sky at approx 23:40 GMT, does seem to tie in with Richard’s fireball.

This spectacular fireball crossed the south of England. Rather inevitably, given the time in the early hours of the morning, there were few visual observers and most images were captured by automated cameras.

The fireball was seen visually by “Don” while crossing the empty car park of Morrisons in Braintree, Essex. He reported seeing a bright fireball in his western sky that produced an “almost daylight” flare for 3-4 seconds. He describes the flare casting “hard edged well defined” shadows and its light having a distinctive green hue. The fireball was heading roughly NNW at an angle of 30-40 degrees to the horizontal, starting above left from Jupiter and passing between Denebola and Algeiba in Leo and ending soon afterwards.

A report on the BBC News website can be seen here

Richard Fleet also detected the radio echo from the fireball, noting it to be surprisingly weak. A copy of the display is shown below left. The image below right contains a radio echo of the fireball captured by Bill Ward from somewhat further away in Kilwinning, near Glasgow. 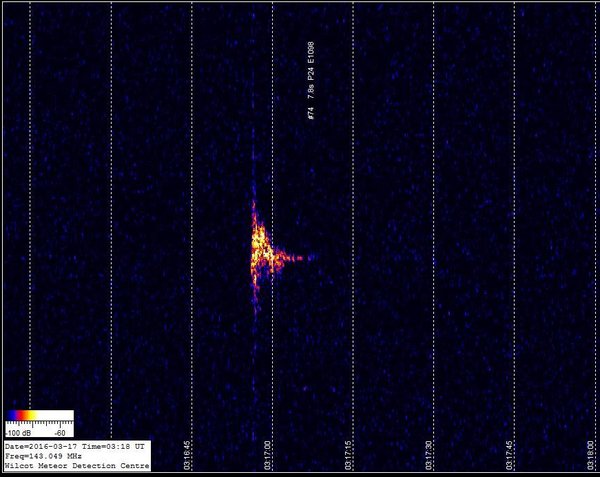 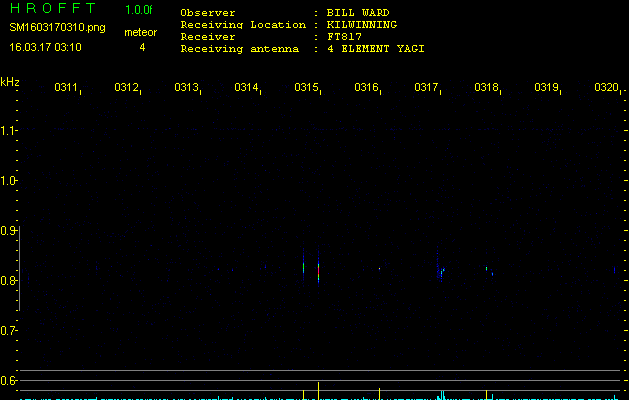