Here, in reverse chronological order, is a summary of reports of fireballs and bright meteors reported to the meteor section during August and September:

There have been many reports of a very bright fireball seen from England, France, Belgium and the Netherlands at this time.

If you saw it, but haven’t reported it yet, please do so via this easy to use  report form 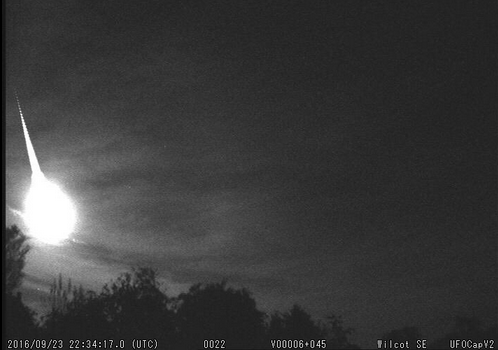 Richard Fleet (Wilcot, Hants) recorded the fireball via one of his video cameras and a still image of the fireball is shown to the right.

Richard has uploaded this video clip of the fireball to Flickr.

Many witnesses reported their visual sightings of the fireball:

For Emma Laflin (Cambridge), the fireball was heading downwards in her southern sky, just to the left of due south. Her description of the fireball was “It was coming straight down and as it fell the light got brighter and flashed a blue/green/red, orange colour as it got close to the ground. It then disappeared.”

Jane McB (Jersey) saw the fireball start in her north eastern sky. She reported the fireball’s colours as Light Blue, Light Green, Orange and White and described it ending with a blue green and orange terminal flare.

For Karl Leach (Chastleton, Gloucs) the fireball was in his south eastern sky. His description was “A light green trail finishing in a really bright flash. The flash lit up the whole sky briefly.”

Adrian Bradley (London) saw the fireball in a direction between ESE and SE and gave this description “It looked like a molten line of light as it went through the sky. It ended in a bigger flash“.

Phillip Dyte (London) also saw the fireball, describing it as being light blue in colour. Unfortunately, nearby buildings obstructed his view of most of it.

For Rob McConachie (Worthing, Sussex) the fireball started high in his NE sky and ended lower down in his eastern sky. His description of the terminal flare was “Bright ‘teardrop’ flash. White in colour.”

Diane Evans (Beaulieu, Hants) saw the fireball start in her north eastern sky and end just to the right of east and described the fireball in this way “glowing blue green train flashed and became bigger as it moved. Then appeared to turn to a smoke grey trail as it travelled across the sky.”

Simon Wood (Denny Lodge, Hants) gave this description  “long bright white tail with a ball of an explosion. the top part appeared white grey but the bulk was various shades of blue with a green tinge. Coming from the ball in the direction of travel was a small trail fading in colour from blue to white.”

Jim Slight (Lowestoft) described the fireball in this way “Bright red turning to green fireball going through Capricornus heading south towards the horizon. Exploded and fragmentation in a bright white light.”

John Hulse (Trefriw, N Wales) saw the fireball in his SE sky and estimated it to be of magnitude -7, describing its colours as “Green, Light Green, Yellow“.

Paul Money (Lincolnshire) described the fireball via a Facebook post “At 23:34 BST the sky lit up with the best fireball I’ve ever witnessed. Almost falling vertically for around 30 to 40 degrees over about 4 seconds and starting as a yellow orange streak then bursting into the brightest fluorescent green I’ve ever seen ending about twenty or so degrees from the horizon. Reckoned it reached from mag -2 at start to -6 when it flared with what seemed like smaller short lived chunks falling close to it.”

A large number of reports were submitted to the IMO database. These can be viewed here

Richard Kacerek reported his analysis of the fireball in this MeteorNews report . Richard took into account the fireball’s path as seen by two cameras of the UK Meteor Observation Network (UKMON) http://www.ukmeteornetwork.co.uk/ and determined the fireball’s trajectory to have been heading in an approx SSE direction roughly midway across the English channel. The fireball was probably of magnitude -6, with the terminal flare reaching mag -10. The fireball’s terminal height was found to be approx 50km. The ground track is shown on this map: 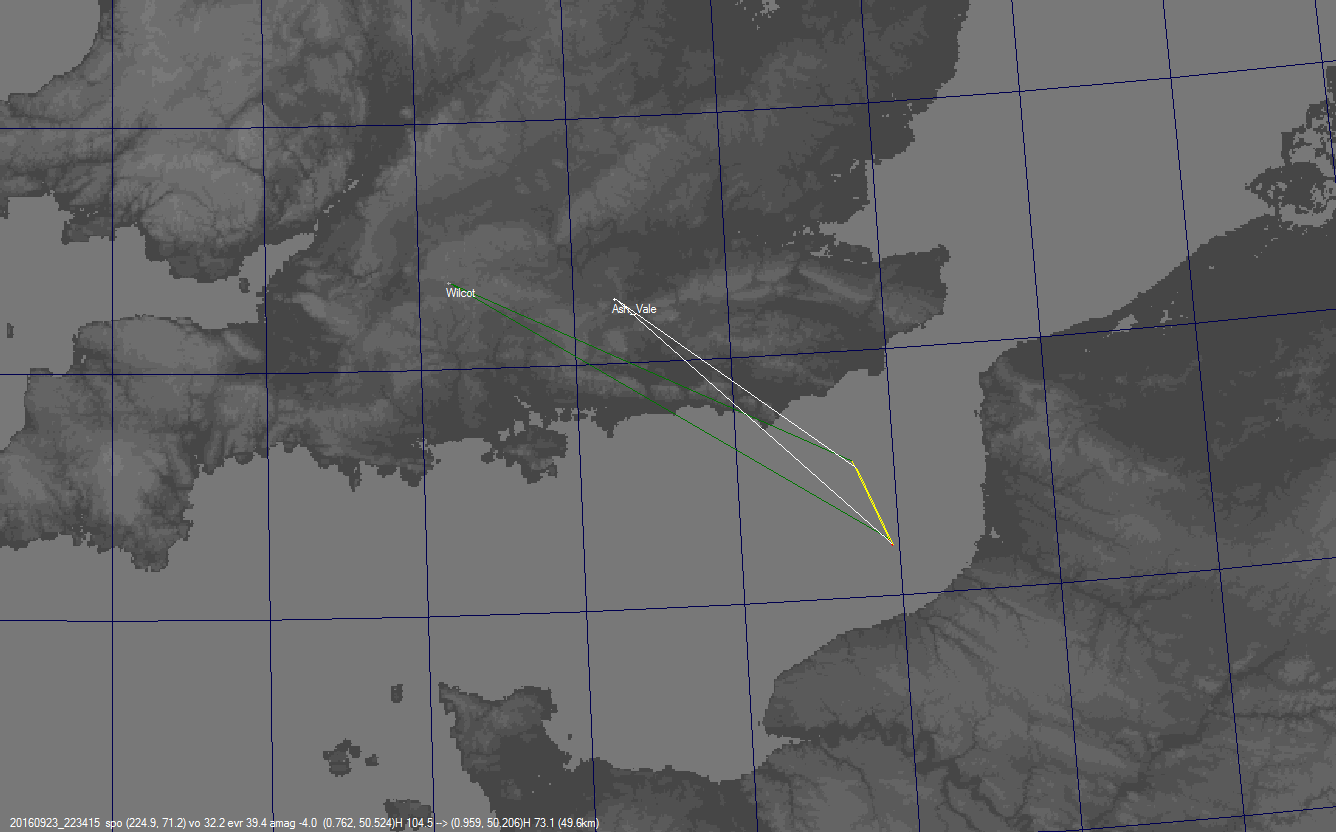 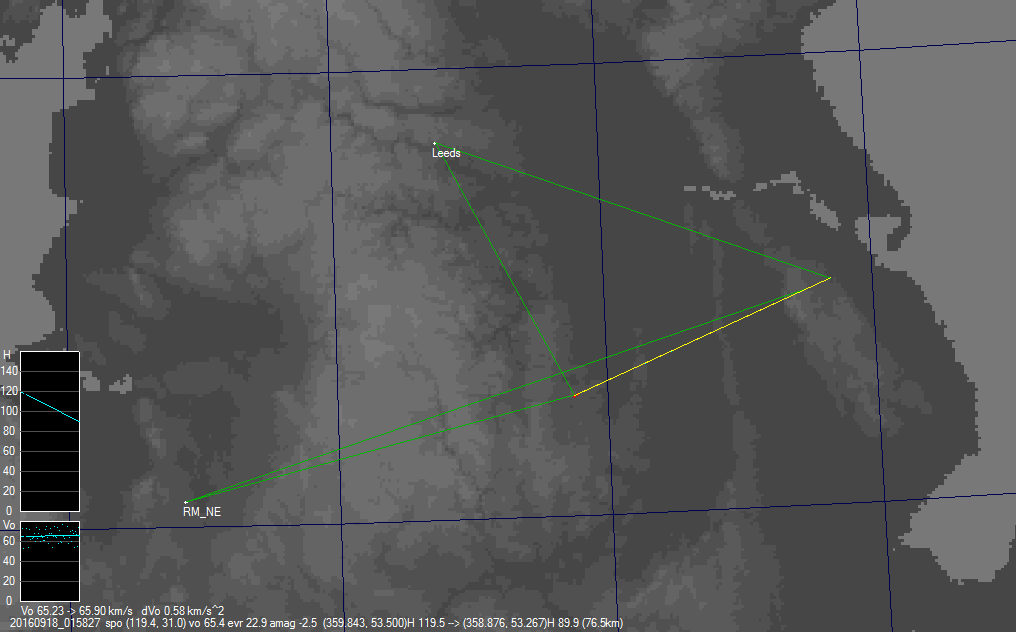 This bright meteor was imaged by Alex Pratt (Leeds).

Alex used his image and another image captured by William Stewart (Ravensmoor, Cheshire) to triangulate this trajectory for the meteor.

The analysis also revealed that the meteor was a sporadic of magnitude approx -2.5.

William also captured a spectrum of the meteor. 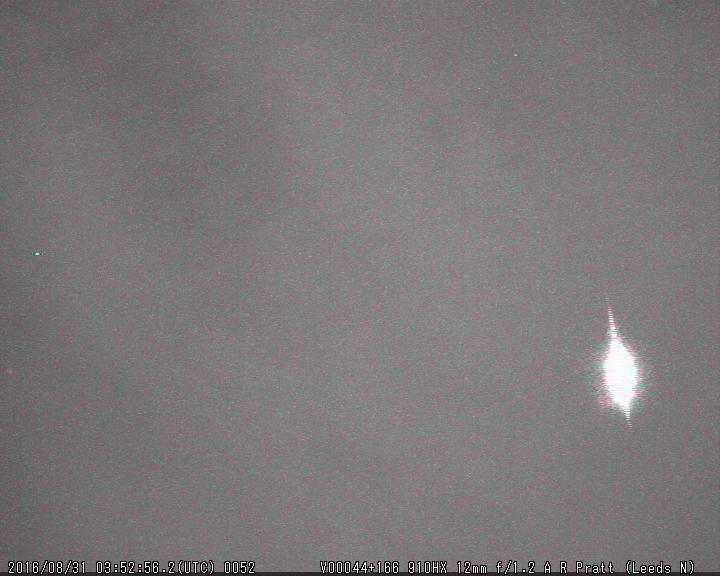 This fireball was imaged by the north facing camera of Alex Pratt (Leeds).

Alex comments that whereas the sky had been fairly clear early in the night, there was thin cloud by the time that this fireball appeared, but the fireball was bright enough to “blaze” though the cloud.

The software being used estimated the fireball to have been of magnitude -4.6.

Unfortunately no other cameras seem to have imaged the fireball and so triangulation of its trajectory was not possible. However, Alex’s imaging of this fireball does ilustrate oce again the benefits of allowing cameras to operate continuously, even at times when visual observing would not be considered feasible.

Bill Ward continues to capture spectra of bright meteors. Here is an example of the synthetic spectrum for one at 22:18:29 UT on August 28th

As usual, the brightest emission lines are those of magnesium in the green and sodium in the yellow. Bill notes that the meteor showed a bright terminal flare.

This fireball was reported by Steven Gray (Winchburgh, nr Edinburgh) who observed the fireball while sitting on the sofa watching TV with the main lights on. He comments “The living room blinds and windows were open a bit as it had been a hot day which meant luckily I was able to spot the fireball. The direction I was looking in though is very accurate as afterwards I held my smartphone compass out in front of me in the direction of the TV that I was watching when the fireball appeared in my peripheral vision.” The fireball was in his north eastern sky, travelling from azimuth 077 / altitude 35 degrees  to  azi  067 / alt 30 and was between  1 and 2 seconds in duration.

The fireball was also reported via several other witnesses across northern England as far south as Hull. Their reports can be seen at http://fireballs.imo.net/imo_view/event/2016/3015

Observers in northern England saw the fireball in their western or north western skies. Combining these reports with that of Steven suggests that the fireball started over the Irish Sea and travelled north eastwards, ending to the east of the Firth of Forth, with Steven only seeing the final stages of the fireball.

A query to the Nemetode group ( 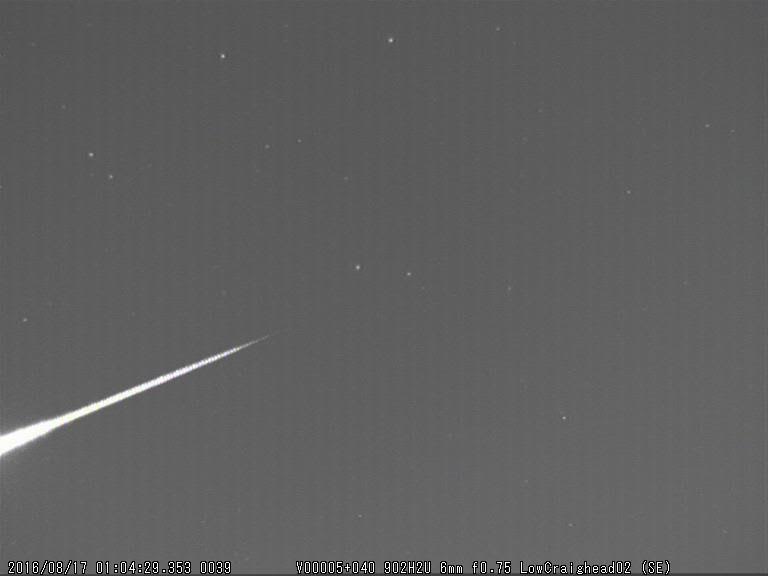 http://nemetode.org/index.html ) , which operates automated cameras across Ireland, Scotland and northern England to detect fireballs, received a number of responses.

None of the respondents in Ireland had recorded the fireball. The fireball also seems to have been outside the field of view of a NE facing camera in Stirling.

However, two cameras in the west of Scotland and one in the Isle of Man did image it in part.

David Anderson (Low Craighead, Ayrshire) captured the start of the fireball’s track in this image from his SE facing video camera (the stars near the centre of the image are Alpha and Beta Arietis, while the stars of Andromeda are at the top of the image.

David reports that his video showed approx 4 seconds of the fireball’s path. 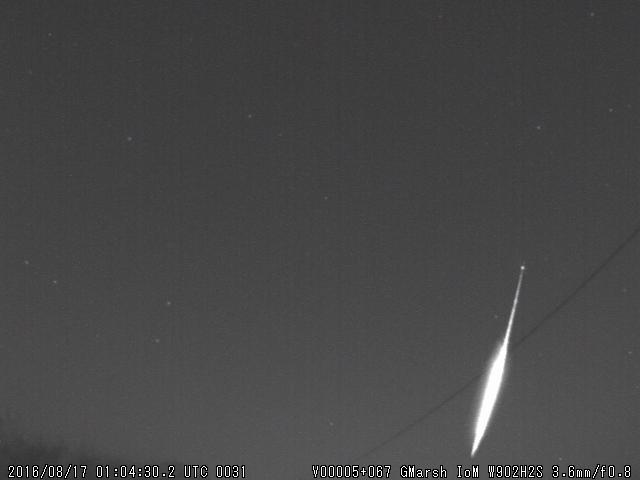 Glyn Marsh (Isle of Man) captured this image of the fireball via his NE facing video camera.

Glyn confirms the suspicion that this was a long duration event. This may explain why there were a good  number of visual witnesses despite the fireball appearing after midnight.

As can be seen from David’s and Glyn’s images, the fireball seems to have ended with a terminal flare.

Bill Ward (Kilwinning) didn’t capture an image of the fireball itself, but did manage to image part of its spectrum. 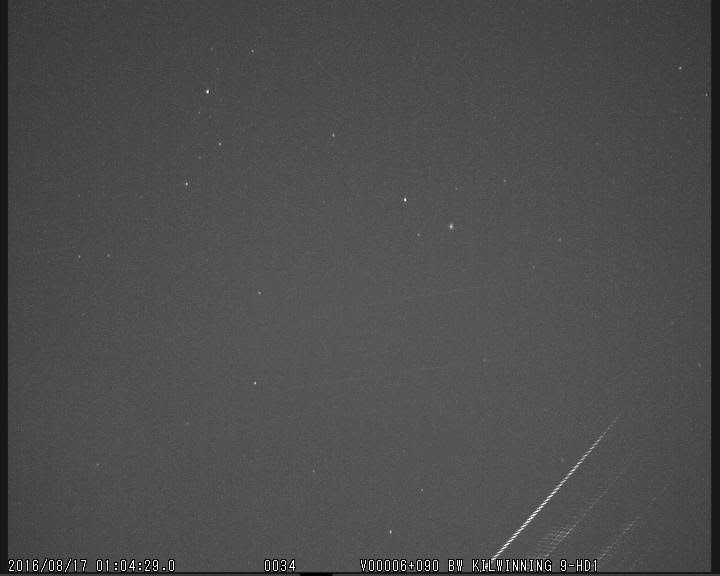 The accompanying image doesn’t include the zero order spectrum, which fell outside of the camera’s field of view, but does include emission lines from the longer wavelength end of the first order spectrum.

Most of the image is taken up by the stars of Perseus, but the emission lines from the spectrum of the fireball can be seen at the lower right.

Bill comments that the brightest spectral line was the yellow-orange emission line from sodium.

He also adds that there were no emission lines from atmospheric nitrogen or oxygen at the red end of the spectrum.

This would fit in with it being a relatively slow moving fireball which wasn’t energising the atmospheric particles it was colliding with sufficiently to generate such emission lines. 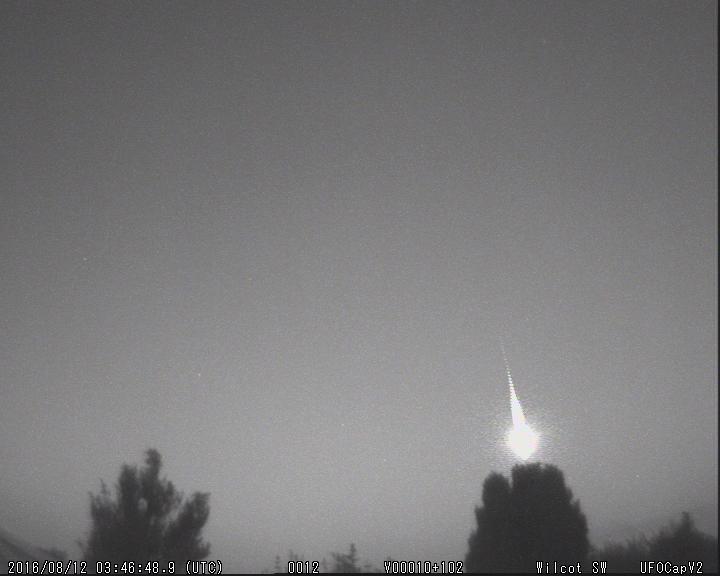 Richard Fleet (Wilcot, Hants) captured this image of a Perseid fireball at 03:46:49 UT in the morning twilight of Perseid maximum night via his south west facing video camera.

Although visual observers often spot fireballs in twilight conditions more readily than do automated camera systems, this is an example in which the automated system captures an image at a time by which visual observers would have ended their watches due to the bright twilight.

Richard routinely uploads his images of fireballs and bright meteors to the UKMON website http://www.ukmeteorwatch.co.uk/meteors

Judith Ings (Hebden Bridge saw this fireball heading vertically downwards in her south western sky. The fireball had a duration of 3-4 seconds, was orange in colour and had a “long sparkling tail”.The path reported for the fireball would suggest that it was probably a Perseid.