Here, is reverse chronological order, is a summary of fireball reports received for September and October 2015: 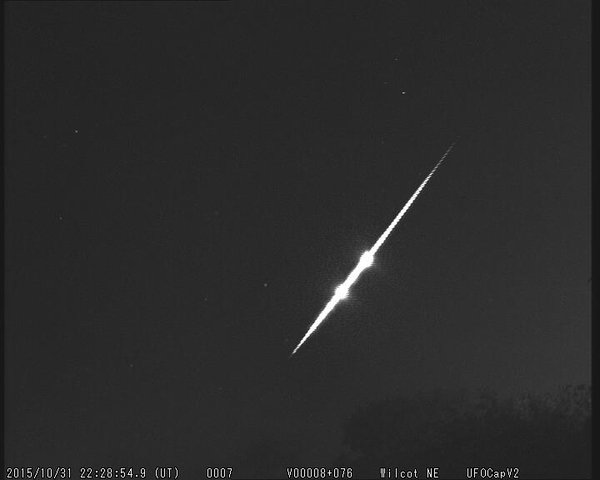 Richard Fleet (Wilcot) captured this image of a flaring Taurid fireball on his NE facing camera.

Although the Taurid meteor shower never produces spectacular rates, it is renowned for its flaring fireballs.

An added bonus is that Taurid meteors move less fast than do most meteors. This increases your chance of getting a good view of any Taurid fireball that appears.

Further images can be seen on the all-sky cameras of the University of Hertfordshire, located at Bayfordbury and Hemel

The fireball was also imaged by a second camera belonging to the UKMON network http://www.ukmeteornetwork.co.uk/.

This made it possible for triangulation to be carried out and their analysis showed the fireball to be over the East Midlands and heading in a north westerly direction. 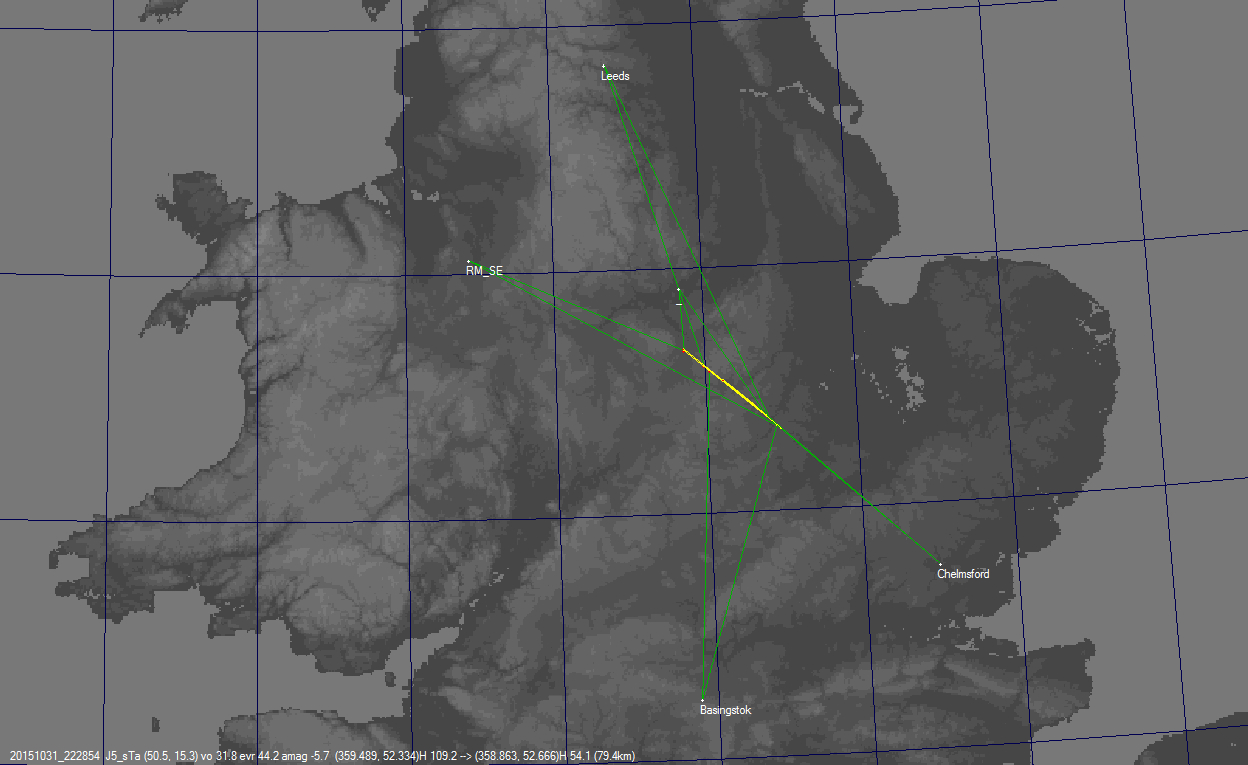 Despite fog affecting imaging in many areas (and the added challenge of excluding images of fireworks that many people were setting off that evening!), five of their cameras maganed to captured images of it.

Their derived ground track is shown on the map to the right.

Statistical analyses have shown that the Taurids produce a higher percentage of bright meteors in some years than in others. This is believed to be due to a “swarm” of larger particles within in the Taurid orbit.

It has been predicted that 2015 would be one such year in which these larger particles are encountered. The “swarm” makes little difference to the overall Taurid rates, but it can lead to a good collection of Taurid fireball images.

Alastair McBeath has written a SPA Forum entry about the 2015 encounter with the Taurid swarm. 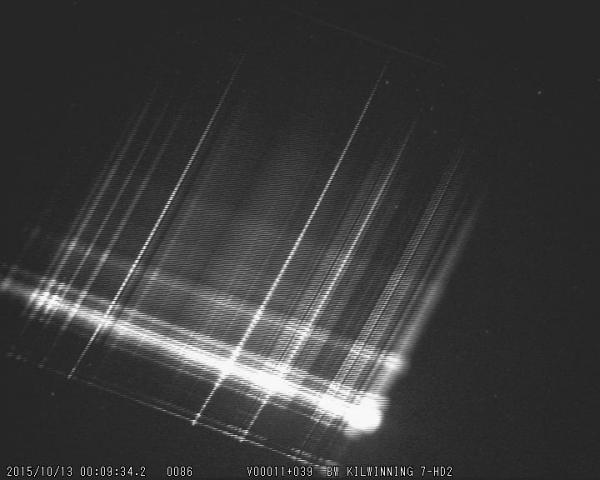 The meteor was heading from the top right to the bottom left of the image. The changing intensity of the lines as they move from top right to bottom left is related to flares in the brightness of the meteor.

Particularly notable in this case, however, was that Bill’s image shows more than one spectrum.

One was from the meteor and a bright flare that it produced ; the other was from a surviving fragment.

The individual spectra are not readily seen in the main image but can be better seen in the second image which is taken from an individual video frame at the time of the main flare.

The upper of the two spectra in this second image has been produced by the meteor itself.  The lower spectrum is from a surviving fragment of the original meteoroid as it continues on its way. 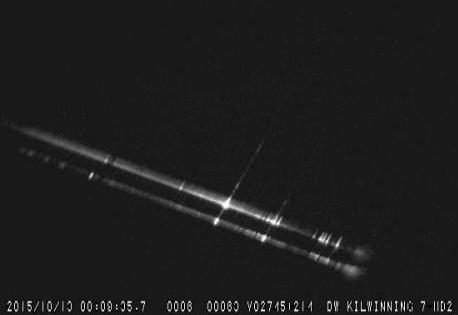 Close inspection of the two spectra reveals some notable differences.

For example, there are several (atmospheric) lines visible on the left of the (lower) fragment spectrum that are not visible in the (upper) flare spectrum.

Bill comments that this is the opposite of what he would have expected – with extra energy being emitted by the flare, the flare would have seemed the more likely to produce emission lines.

He also notes, however, that there are also some lines visible in the flare spectrum that are not seen in the fragment spectrum.

Bill has also supplied these colourised spectra to contrast the spectral lines visible in each of the two spectra:

He comments : The two spectra are separated by three video frames – 0.12 second. In this short interval, there are significant differences between the fireball afterglow (upper spectrum) and surviving fragment (lower spectrum).

What is more interesting is that if you examine the image closely, some of the shared lines are slightly different in appearance. The sodium line in the upper is a bit “fuzzy” compared to the fragment whereas the blue magnesium/iron lines seem to be a touch sharper in the flare.
This is another example of the excellent pioneering work that Bill has been crrying out regarding meteor spectra.
2015 Oct 7th  23:45 UT  (00:45 BST on Oct 8th)

Graham Anderson (West Wycombe) witnessed this fireball while checking for a display of the northern lights. The fireball was descending in his northern sky, passing vertically between Alioth (epsilon UMa) and Megrez (delta UMa) and ending at an altitude of about 25 degrees.

This fireball possibly ties in with fireball reports from Nottingham and East Yorkshire, reported elsewhere.

This fireball was reported by David Scanlan (Southampton), who saw it below Ursa Major as golden in colour with a bright core which started to break apart at the end and left a train which persisted for 5-6 seconds.

There were also additional visual reports of this fireball posted on-line by observers in Ilkley and Carlisle.

There is also a short trail below Ursa Major on a 19 second duration exposure captured by the Bayfordbury all-sky camera of the Univ of Herts which starts at 19:32:44 UT (there are also two longer trails on the image that are due to aircraft).

A 60 second exposure starting at 19:31:54 captured by the Univ of Herts Hemel all-sky camera also includes an extra ‘star’ below Ursa Major which may tie in with this fireball (although the time range doesn’t quite overlap). This extra ‘star’ is absent from the preceding and subsequent images.

Graham Roche (Dublin) has posted a video clip showing this fireball and its spectrum on Instagram. 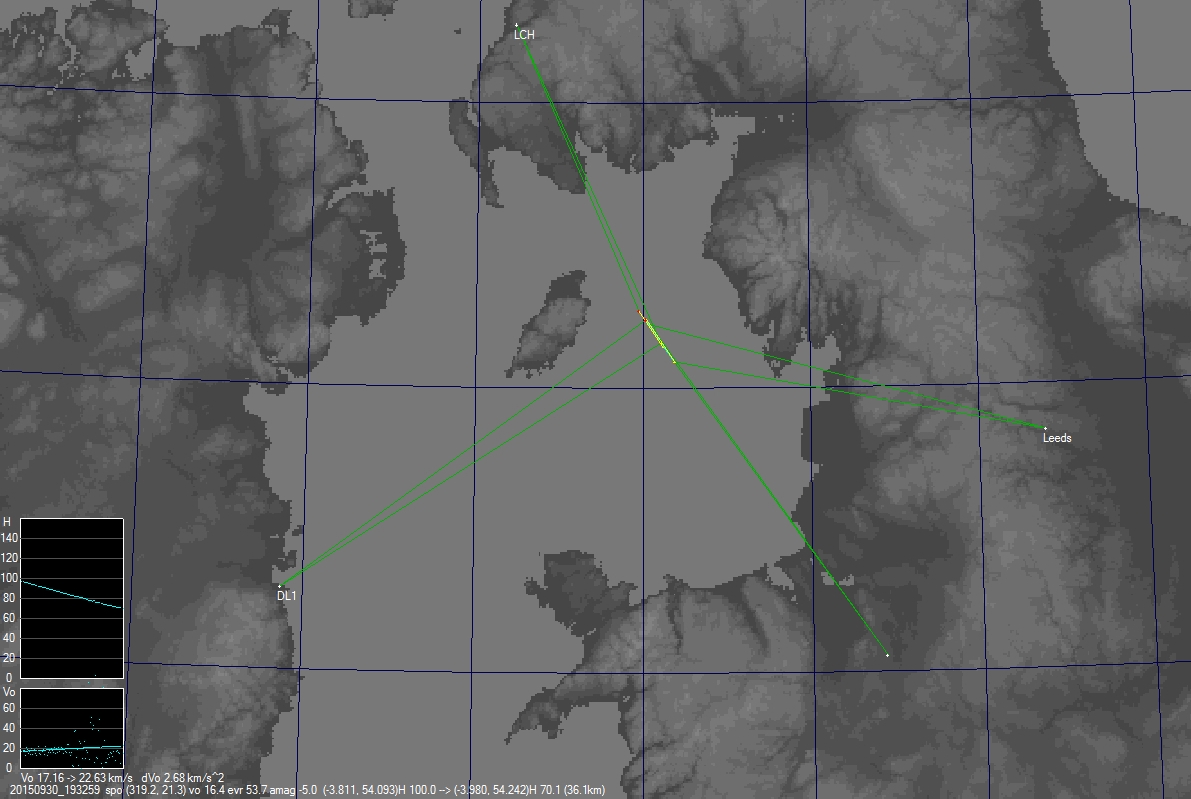 Three other cameras of the network (in Leeds, Cheshire and Ayrshire) also captured images of this fireball.

William Stewart has analysed these and determined this “ground” track over the Irish Sea.

The pre-encounter orbit derived indicates that the object was probably asteroidal in origin.

This is another example of the impressive work that observers are able to carry out nowadays by capturing images from multiple locations, using triangulation to determine the ground track, using the velocity info from the videos to work back to the solar system orbit and using the spectrum to determine the meteoroids particle.

Many fireballs, however,  still “evade” these camera networks and so visual reports are still important.

This fireball, of duration 3-4 seconds, was reported by Amanda Grabham (Cowes, Isle of Wight). The fireball started in Aquila in her south western sky and was heading north, ending in her western sky. She notes that it broke into two pieces and ended with a terminal flare.

Bill Ward (Kilwinning) has reported via Twitter and via the ProBoards forum, his success in capturing the spectrum of a bright meteor that was imaged from two other locations.

Once again, this makes it possible to link the composition of a meteor with its former solar system orbit. Bill notes that the spectrum of the meteor remains dominated by a sodium line until it produces a terminal flare, at which time lines related to iron come into view. Further details can be found on the ProBoards forum

A mag -4 fireball was reported by Robert Colclough (Packmoor, Staffs). The fireball had a duration of 1-2 seconds and travelled from the north north west to the north and was at an elevation of about 50 degrees. It left a train which persisted for 2 seconds.

This bright meteor was seen by Robert Colclough (Packmoor, Staffs) in his ENE sky. It was orange and red in colour and had a duration of 1-2 seconds, but didn’t leave a persistant train.

This fireball was seen by SPA Planetary Section Director Alan Clitherow (Ceres, Fife). It had a duration of 2-3 seconds, was white in colour and travelled vertically downwards near the Aquarius/Capricornus border. Alan noted that it ended near a streetlight and this made it difficult to assess whether it had left a persistent train.

There is another fireball report on the Armagh website http://arpc65.arm.ac.uk/fireballs/search.html from a witness in Dunfermline which probably also ties in with this fireball. The reported time is slightly different, although this is not unusual in fireball reports as non-astronomers who witness fireballs often don’t make an exact note of the time when they see the fireball.