The long light evenings at this time of the year, together with the shorter nights inevitably reduce the opportunities for people to see fireballs. In general, there will be few people still outdoors by the time that it gets dark.

The following fireballs have been reported during this period:

This fireball was reported by “Les” from Norwich. He described it as having a 3 second duration as it headed from the south east to the north west, passing above the stars of the ‘Plough’ and just to the west of Polaris.

This fireball was seen by Peter Edwards (Liverpool). He describes it as passing overhead,  having a duration of 3 seconds and being orange & white in colour. 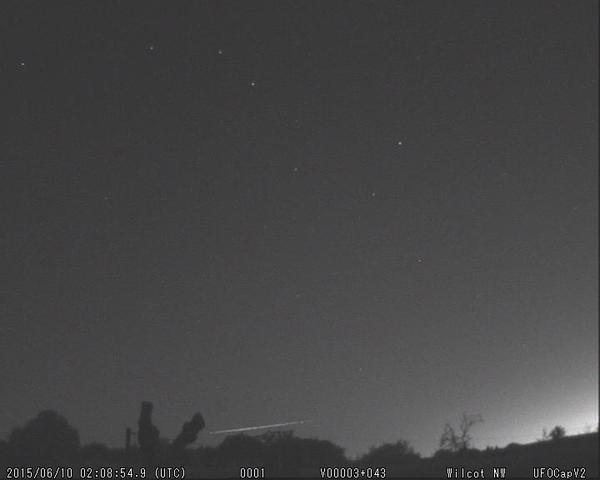 This fireball was imaged by Richard Fleet (Wilcot, Hants) very low in his northwestern sky.

His image is reproduced here.

Triangulation, using Richard’s image along with an image captured by another UKMON member, showed the fireball to have had an atmospheric trajectory over the Atlantic Ocean, just to the north west of Co Donegal.

This fireball, of duration 3-4 seconds. was reported by Adrian Umpleby (Fen Ditton, Cambs) and by David Winn-Morgan (Kingston upon Thames). Adrian saw the fireball through his car windscreen and describes in heading downwards in the southern sky in an almost vertical direction.

Additional reports appeared on the IMO website (see http://fireballs.imo.net/imo_view/event/2015/1579 ) from locations including Oxfordshire, Luton and London. There were also several reports from observers in northern France. Unfortunately, no images of this fireball have been reported.

The sky positions reported in the individual reports indicate that the fireball started near the south coast of England, probably over eastern Sussex and headed in a roughly SSE direction, passing just to the west of Rouen and ending around 120 km west of Paris.

This fireball, of duration 1-2 seconds, was seen by Jennifer Ashby (Bristol) and was heading in a westerly direction. She describes it as being orange in colour.

This fireball was reported by Kathleen G (Glasgow). She saw it in the north western sky through a window and described it as being bright blue in colour with a short blue tail and having a duration of about 4 seconds.