Here is a summary of fireballs reported to the Meteor Section during this period: 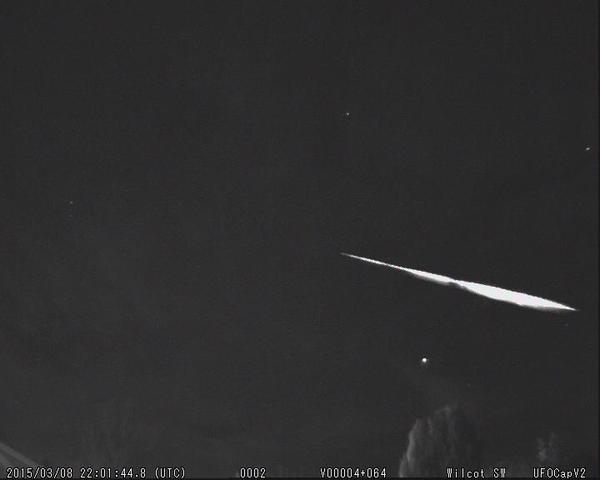 Richard Fleet (Wilcot), operating a number of video cameras as part of the UKMON network, captured this image of a fireball in his southern sky.

The bright star beneath the fireball is Sirius.

This fireball was quite widely seen over southern England, with visual reports coming from locations that included Portsmouth, Wiltshire, Sussex, St Albans, Essex, London and Coventry.

Richard described the fireball as being as bright as Venus and noted that triangulation suggested that the ground path of the fireball’s trajectory ended over Devon.

This second fireball of the night was reported by Michael Bowyer (Morpeth), who described it as being a very bright white light descending vertically in the south/south western sky.

Not surprisingly, given that there would be less people outdoors at that time of the night, only one other visualreport has been made of this fireball. This was from an observer in Blackpool, from whose line of sight the fireball was in the eastern sky and heading northwards.

The fireball seems to tie in with one imaged low in the northern sky by Nick James in Chelmsford via one of the cameras that he operates as part of the NEMETODE network. This gives a more precise time of 00:22:15 GMT. The path of the imaged fireball on Nick’s NW facing camera is certainly consistent with it starting over northern England, passing between Morpeth and Blackpool and heading in a south easterly direction.

There were a number of reports (to the SPA and to the Armagh website) of a fireball seen across the north of England during this evening, although there is a spread of nearly an hour in the reported times. The various visual reports indicated that it was fairly slow moving, had a general east to west trajectory and a duration of several seconds. Several colours were mentioned : green, orange, red, as well as some fragmentation.

This fireball most likely ties in with one imaged by Jeremy Shears (Cheshire) of the NEMETODE network at 20:48:22 GMT. William Stewart(Cheshire) also imaged the end of this fireball.

William’s analysis suggests that the final stages of the (east to west) ground track were as shown in the accompanying map.

This fireball seems to have become known as the “Loch Ness fireball” (courtesy of an image posted on the BBC News website http://www.bbc.co.uk/news/uk-scotland-highlands-islands-31904273 ), although as we shall see, its atmospheric trajectory was somewhat further south.

Additional reports of this fireball can be found on the IMO fireballs website  and the Armagh Fireball reports page.

In addition, Jimmy Fraser (Alness) has reported that he was aware of a bright flash in his eyepiece at approx this time while at his telescope (which was facing north west and so away from the fireball).

Unfortunately, all but one of the cameras of the NEMETODE network seem to have all been clouded out at the time. Preliminary investigations by William Stewart of NEMETODE, indicate that the fireball probably started at an altitude of around 95km over the sea below southwest Dumfries & Galloway and headed northwest towards the Kintyre Peninsula, ending near Campbeltown at an altitude of about 33km.

Roger and Iris Hamer (Mablethorpe, Lincs) reported a fireball seen heading east to west and of duration 4-5 seconds. The fireball passed just above the belt of Orion.

Unfortunately, it seems that most of the rest of England, including the four all-sky cameras of the Univ of Herts , was clouded out at the time.

This fireball in the southern sky was reported by Chris Miller (Hurn, Dorset), heading downwards as it moved roughly west to east. Chris mentions that it fragmented into two pieces near the end of its path.

It was also reported by several other observers in Bristol, Somerset and Devon. It also probably ties in with two reports of a fireball seen in the north eastern sky from Brittany, France.

Although the fireball would have been well placed to have been seen by the cameras of the UKMON network, no reports of it being imaged have come to light so far, possibly due to it appearing during the evening twilight, a period during which cameras are often not yet active – and even when active they are less successful than the human eye in picking up fireballs. 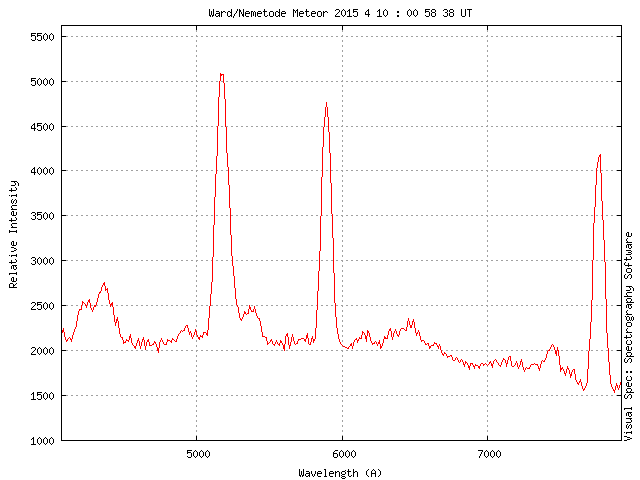 Bill Ward (Kilwinning) reports capturing a spectrum of this bright meteor (probably mag -2). The intensity plot of the spectrum is shown to the right. Bill notes that, in addition to the usual emission lines from Magnesium and Sodium, it also contains bands due to iron, indicating that the parent object was probably a stony iron meteoroid,

Bill also reports that the meteor was also imaged by David Anderson (Lower Craighead, Ayrshire), who operates cameras as part of the NEMETODE network.

This is very significant and is probably the first time in the UK that a fireball whose spectrum has been captured has also been imaged from another location, leading to the opportunity to determine the meteoroid’s former solar system orbit.

A preliminary analysis indicates that the parent object probably had a low inclination solar system orbit, with its aphelion between the orbits of Mars and Jupiter.

Maria MacAskill (Buckie, NE Scotland) reported this fireball in the morning twilight. The fireball also appears to have been seen from Stonehaven and Cruden Bay in Aberdeenshire and, somewhat lower in the sky, from West Yorkshire (although each of these report a slightly earlier time). Once again, largely due to the twilight skies, this fireball seems to have been missed by various automated cameras that monitor for fireballs.

All reports describe the fireball having a duration of 3-4 seconds and describe it fragmenting near the end of its path.

Taking into account the sky positions reported by the various witnesses, it seems likely that the fireball was over the northern North Sea and was probably heading in a south easterly direction.

This green fireball, of duration 3-4 seconds, was reported by Rod Hine (Bradford) descending in his NNW sky and by Iain Critchley (M6, near Tebay Cumbria). Rod noted that it left a persistant train that was visible for 3 seconds and was brightest midway along. He also noted a flash near the end of its path as it became hidden from view behind some trees. Iain, viewing the fireball through his windscreen, described a bright core surrounded by bright green flame with a purple tinge.

There are also reports of the fireball from witnesses in Cumbria (Drumburgh, Keswick & 1 other), Scottish Borders (Selkirk & 1 other), Beattock (Dumfries & Galloway), Lancashire and Co Donegal. Several report it fragmenting near the end of its path.

Unfortunately all reports so far are from witnesses to the south of the fireball’s path and so it is only possible to estimate that the fireball’s trajectory was over central Scotland. Reports that included start and end directions suggest that it was probably heading in a NNW direction.

With the fireball’s track being over Scotland, the later sunset there will mean that the twilight would have still been too bright for many of the cameras of the NEMETODE network to have started operation. However, David Anderson (Low Craighead, Ayrshire) reports that he did catch the start of the fireball on his NE facing camera and his image, with the fireball below the ‘head’ of Draco, is shown below: 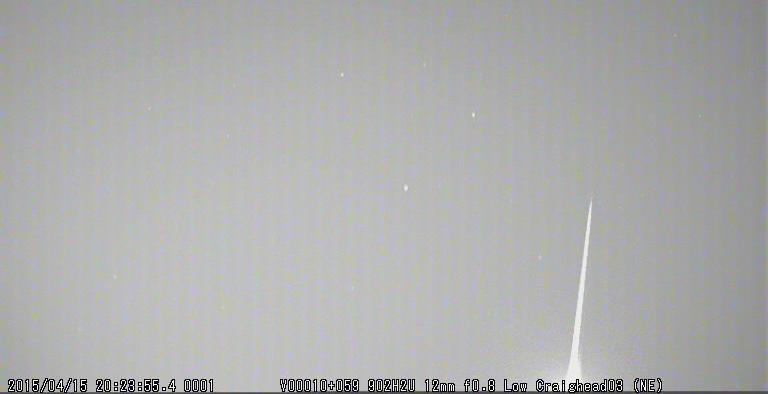 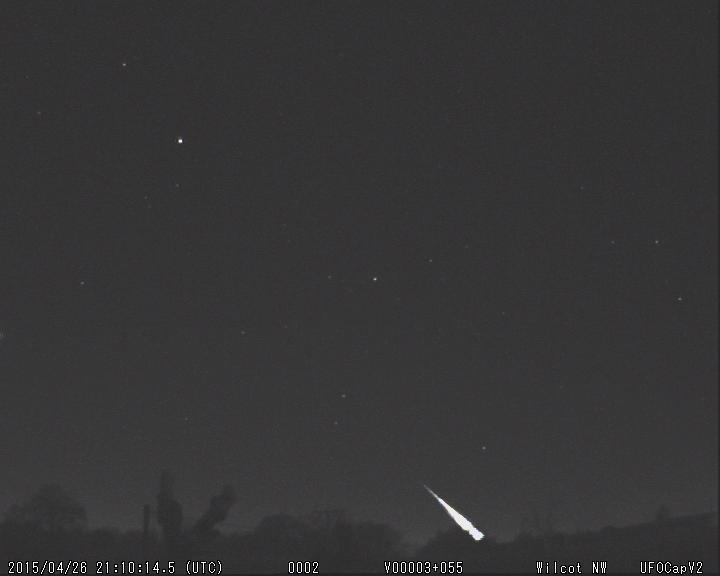 This fireball was widely seen across the UK with early visual reports to the SPA being received from Susan Cochrane-Brown (Edinburgh), Steve Magness (Edinburgh), J Griff(Southport) and Claire Manners (Embleton, Northumberland). Claire also reports that the fireball was seen in the north western sky by a friend in Co Durham.

In addition, Richard Fleet (Wilcot Hants) captured this image of the fireball low in his northern sky.

With skies having been clear over most of the UK and Ireland, there are many other visual reports on-line of this fireball, from locations including Rochdale, Wrexham, Isle of Man, Livingston, Cumbernauld, Glasgow, Portpatrick, Castlereagh, Lancaster, Haverfordwest, Shrewsbury and Staffordshire.

Many reports describe the fireball fragmenting near the end of its path. Orange and Green were the most reported colours.