Here, in reverse chronological order, are details of fireballs reported to the section during December. 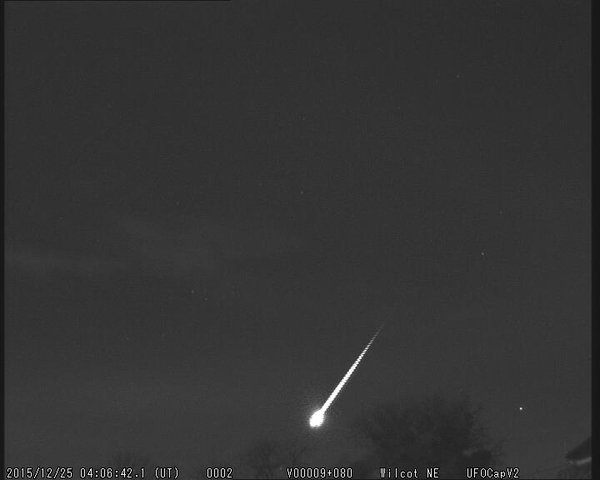 The meteor was also imaged by Ray Taylor (East Yorkshire) of the NEMETODE network.

It was probably also imaged by Stuart Atkinsonm (Cumbria), although the image posted by Stuart on Twitter didn’t specify an exact time.

This fireball, of duration 3-4 seconds, was witnessed by Tom Goode (Plumpton End, Northants), and was heading in a northerly direction at about 60 degrees elevation in his NNE sky. He reports it leaving a train that persisted for 1 second. No fragmentation was seen.

The were also reports of this fireball being seen from Leeds, from Easingwold (N Yorks), from Abingdon (Oxon) and from East Anglia. Most witnesses described it as being green in colour. 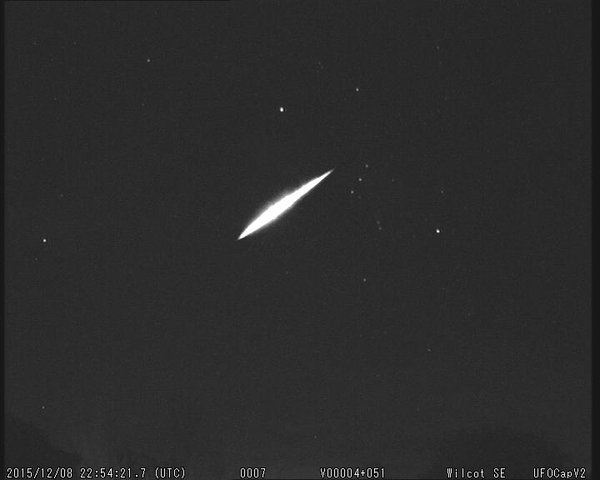 This fireball was seen visually by Ben Taylor (London) , Sharon Howard (London) and Kari Brown (Romney Marsh, Kent). All three witnesses saw fragmentation. Sharon noted that it showed two flares in brightness while Ben noted that it broke up into five fragments. Kari noted that it left a short-lived persistent train.

Richard Fleet (Wilcot, Hants) captured this image of the fireball heading out from Orion via his SE facing camera.

Images of the fireball were also captured by the all-sky cameras of the Univ of Herts. It was high in the sky from Niton (Isle of Wight) and somewhat lower in the sky from Bayfordbury and Hemel

A video of the fireball has also been posted on-line by the UKMON group http://www.ukmeteornetwork.co.uk/. The video was captured by a camera in Ash Vale, Surrey. In the video, Orion can be seen on the left of the field of view

Although the Geminid meteor shower is currently active, the path of the fireball in Richard’s image clearly shows that it did not come from the Gemini region and was therefore simply part of the random sporadic background.