For observers in the UK, the narrow Quadrantid peak would occur during the early afternoon – at around 14h UT on January 3rd.

– in the pre-dawn hours of Jan 3, some way from the peak, but in moonless skies and with the radiant high in the sky

– in the early evening of Jan 3, closer to the peak time, but with a thick crescent Moon in the SW sky and with the radiant getting low in the NNW sky.

The weather would also be a factor of course. In the event, skies were clear over much of the UK during the night of Jan 1-2, but a weather front spread cloud progressively southwards as the night of Jan 2-3 progressed and most areas stayed cloudy throughout the night of Jan 3-4.  Frustrating!

Two reports have been received – from Ken Meadows (Wembley, London) and from Tom Banks (Comberbach, Cheshire). 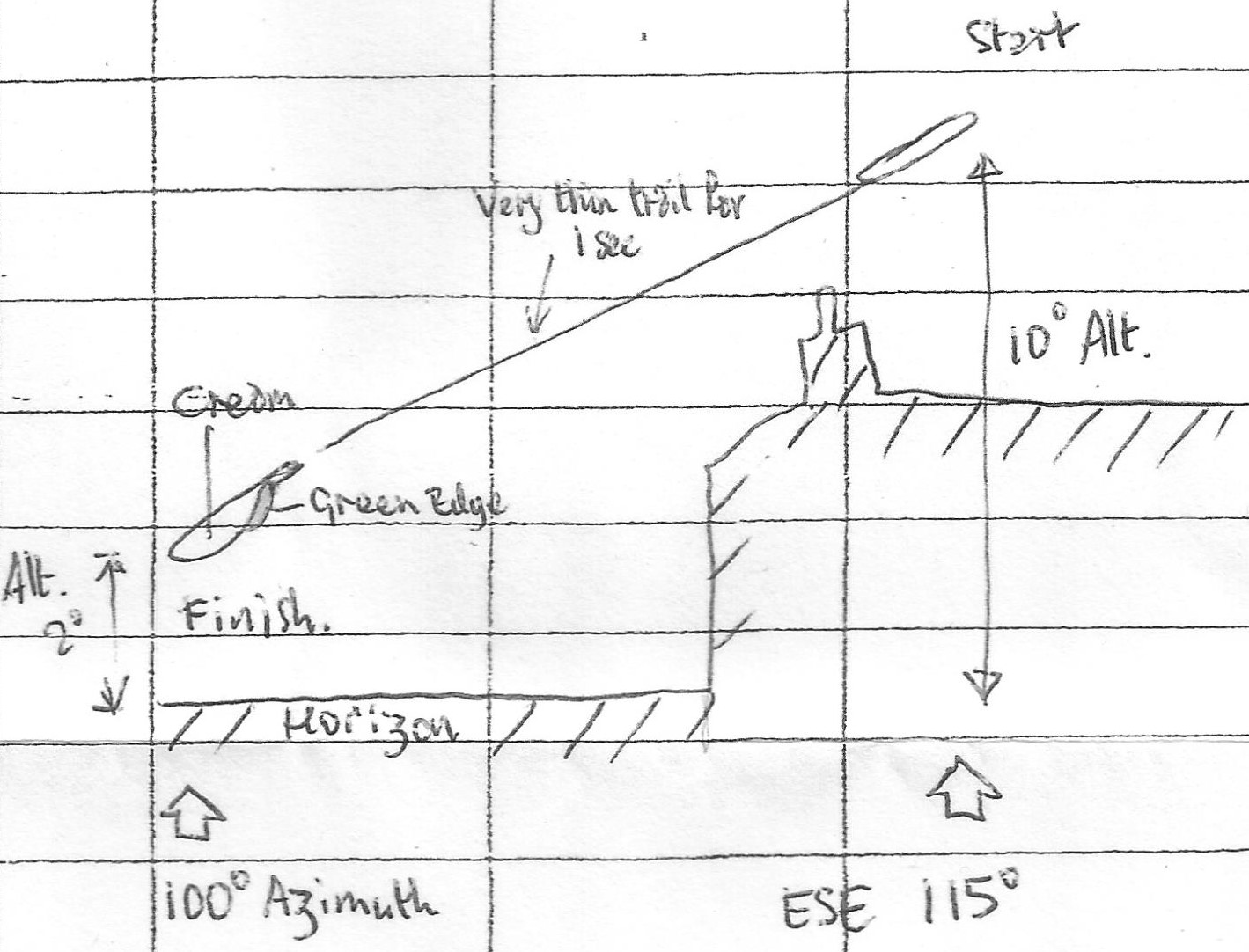 Ken carried out a marathon watch during the night of Jan 2-3, starting at 16:30 UT and ending at 06:17 UT. Various short breaks, totalling 78 minutes were taken during the night, resulting in an observing time of 12 hours and 29 minutes.Observing conditions were far from ideal, with light pollution reducing the limiting magnitude to 4.2. In total, he recorded 17 Quadrantids and 7 sporadics, the majority of these meteors being seen in the final 4 hours when the Quadrantid radiant was climbing high in the sky. The most notable meteors were a mag -3 sporadic at 23:59 UT, a mag -1.5 sporadic at 01:12 UT (see accompanying sketch) and a mag -3 Quadrantid at 03:46 UT.

The International Meteor Organisation’s Quadrantid activity graph can be seen here . At the time of writing, this shows the Quadrantid ZHR becoming high (approaching 80) in the late morning (UK time) of Jan 3rd, but this is followed by a gap that includes the predicted peak time. 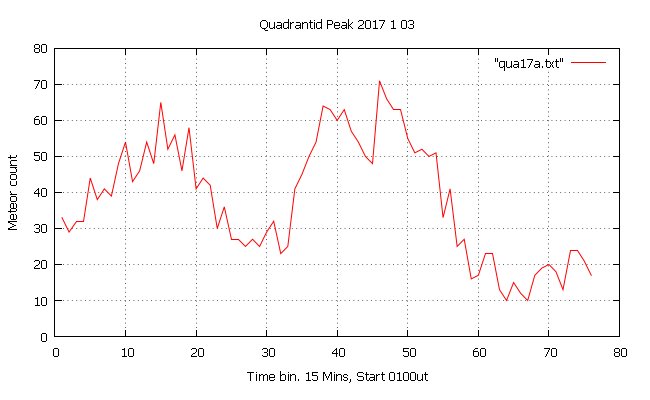 With skies being cloudy during Jan 3, Richard Fleet (Wilcot, Hants) and Bill Ward (Kilwinning) observed the Quadrantid peak by monitoring meteor radio echoes from the GRAVES radar system in France.

Bill‘s graph hows the number of meteor echoes recorded during each 15 minute interval, starting at 01h UT on January 3rd. Hence the predicted peak would be due at around bin 50.

The number of meteor echoes recorded depends not only on the level of meteor activity, but also on the altitude of the Quadrantid radiant and its position in the sky relative to the direction to the GRAVES transmitter. 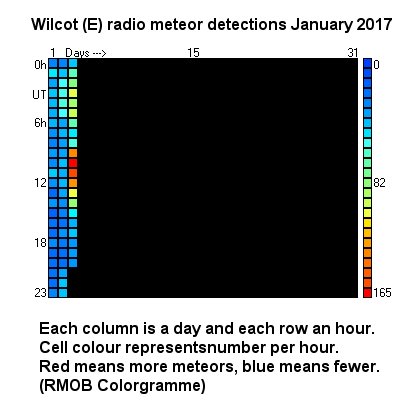 Richard used the RMOB Colorgramme software to plot his results during the early days of January.

In the accompanying plot, each square represents the number of meteor echoes detected in 1 hour,with blue representing the lowest rates and red the highest.

As can be seen, meteor counts were relatively low during the first two columns (Jan 1 and Jan 2), but were much higher on Jan 3rd,

Interestingly, Richard’s highest activity occurs in the late morning, in line with Bill’s late morning peak, rather than near 14h UT.

More colorgramme plots, from observers around the world, can be seen at http://www.rmob.org/livedata/main.php .  A number of these also suggest a late morning (UK time) rather than an early afternoon peak. We should bear in mind, however, that some meteor showers do show different peak times for particles of different sizes and that radio observations can detect particles that are smaller than those that produce naked eye meteors. The Quadrantids are one such shower for which this effect has been reported.