Here are details of additional reports that have been received for the 2017 Perseids:

Tom Banks (Comberbatch, Cheshire) observed (LM 5.2) for 4 hours and 32 minutes between 22:04 and 03:10 UT during the night of Aug 12-13, seeing 29 Perseids and 6 sporadics between 22:04 and 00:04 UT, followed by 25 Perseids and 6 sporadics between 00:22 and 02:22 UT and finishing with 4 Perseids and 1 sporadic between 02:38 and 03:10 UT, the latter session being affected by 30-50% cloud. Overall, 30 of the Perseids left persistent trains. The most distinctive was a bright Perseid in Hercules at 01:03UT that left a train that persisted for 24 seconds and was seen to be distorted by the upper atmosphere winds as it faded. This was most likely the same fireball as imaged by Richard Fleet from Wiltshire via his NW facing camera (see later).

David Scanlan (Romsey, Hants) has reported the results of a meteor watch that he carried out during the night ofAug 12-13 between 20:45 and 23:15 UT with Kylie Arthur and David Curtiss. In 2 hours and 30 minutes (LM 5.0), they recorded 73 Perseids, 3 Delta Aquarids and 10 sporadics.

Robin Scagell (West London) reports monitoring the sky (alongside his imaging) between 22:40 and 00:20 UT during the night of Aug 12-13 in very variable skies, ranging from 7/8 to 4/8 cloud. He saw 18 Perseids and 2 sporadics, although he adds that for at least 20 minutes he was not watching due to having to reposition the camera and restart the exposure sequences because of the moving cloud. Hence his observing time probably totalled 70-80 minutes. His brightest meteor was of magnitude -3 Perseid.

Robin also observed the Perseids alongside his imaging during the night of Aug 13-14. He notes that the conditions were highly variable with high drifting cloud. When conditions were good the limiting magnitude was around 4.5. In the first session, from 22:07 to 23:10 UT, with about three minutes lost to photography. he saw only seven meteors, of which five were Perseids and two sporadics. The second session was from 00:29 to 02:03 UT, with about four minutes of distraction. This time he saw 15 Perseids and 3 sporadics.

Don Matthews (Kincardine, Fife) reports how he kept a look out for Perseids while he was photographing variable stars on Aug 12-13.  Between roughly 22:40 and 00:00 UT, he estimates that he managed about 1 hour of meteor watching between the times when he had to give attention to his telescope or camera. His Limiting Magnitude was about 3.5 and the sky was almost completely clear. His effective view was around 25-30% of the sky. He saw eight Perseids and two sporadics. One of the Perseids was about magnitude +2, the other seven brighter, between about 0 and -2.

Kevin Boyle (Stoke on Trent) has reported a Perseid fireball that he witnessed at 21:25 UT on the evening of Aug 12. It travelled in a south south easterly direction from Cepheus via Cygnus, towards Lyra. Kevin notes that it showed an unusual ‘reddish’ hue and lasted for no more than 2-3 seconds.

Although many parts of the UK had clear skies on the night of Perseid maximum, somer observers were unlucky with the weather, with Mell Jeffery (N Yorkshire) and Alastair McBeath (Morpeth, Northumberland) reporting overcast skies.

Richard Fleet (Wilcot, Hants) has posted the results of his imaging during the night of Aug 12-13 via Twitter 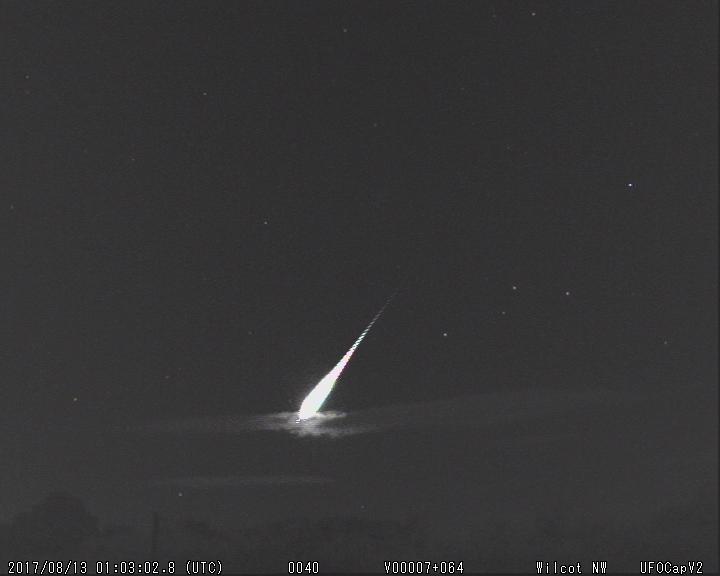 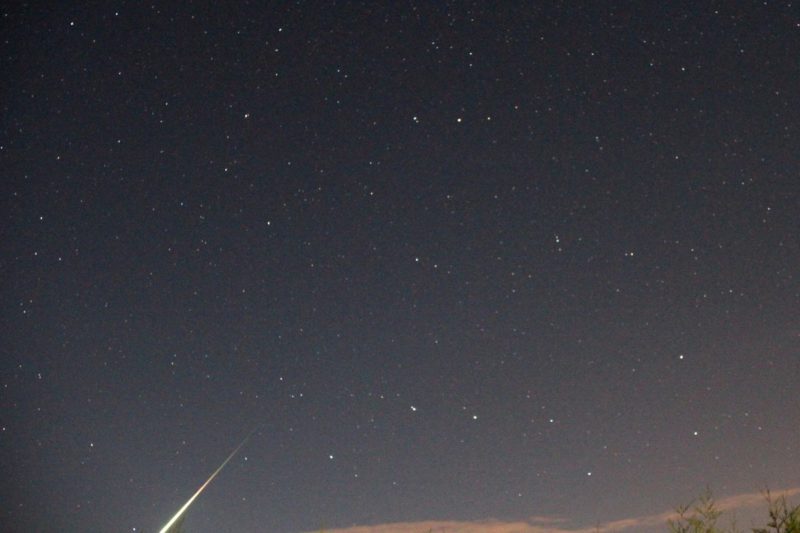 The above two images show the fireball, at 01:03 UT on Aug 13, described by Richard as his best of the night. The left hand image is extracted from the video record of his NW facing camera; the right hand image is a DSLR image. 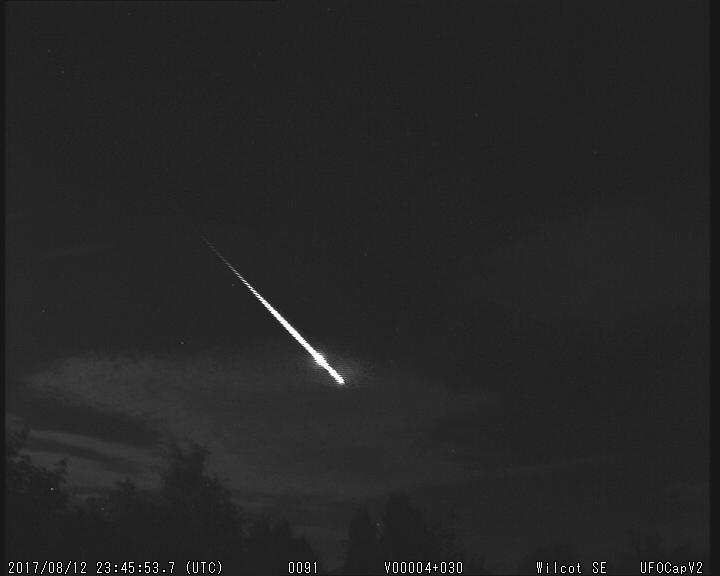 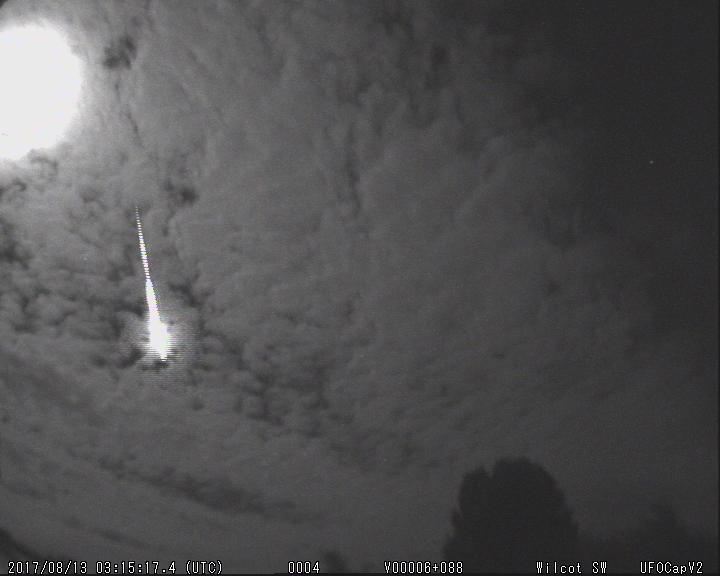 Alex Pratt (Leeds) imaged large numbers of meteors during the night of Aug 12-13. He reports totals of 123 Perseids for his N facing camera, 182 for his NW facing camera and 164 for his SW facing camera, in addition to a number of minor shower meteors. 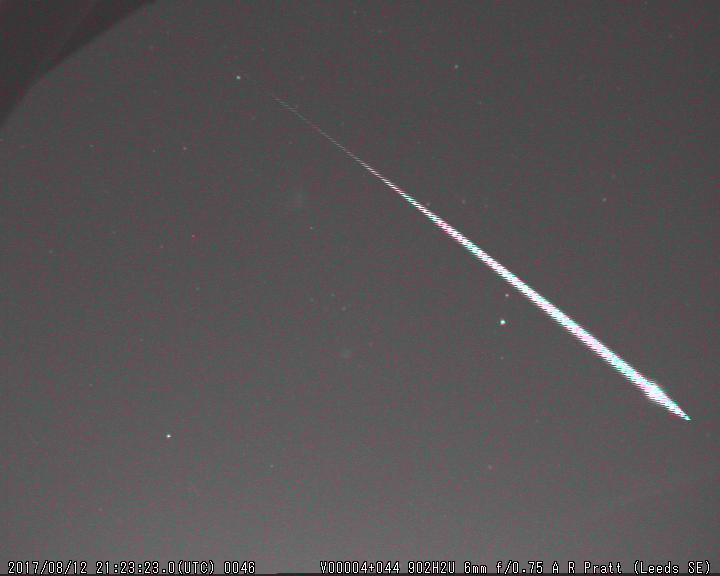 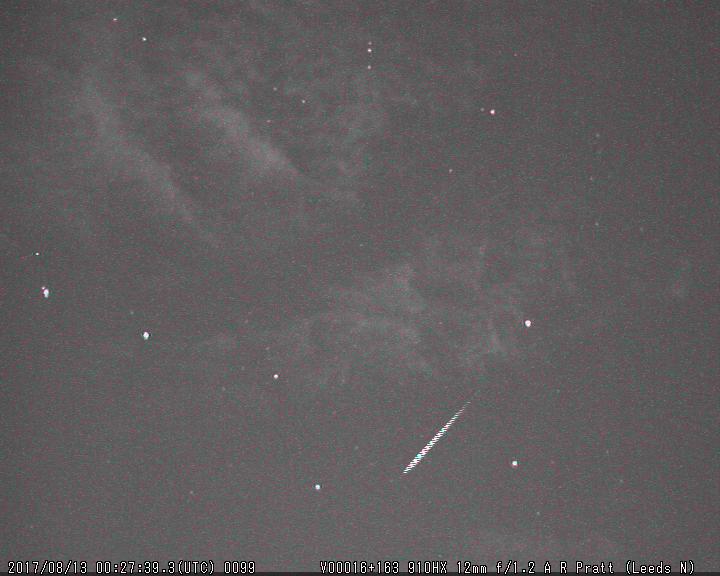 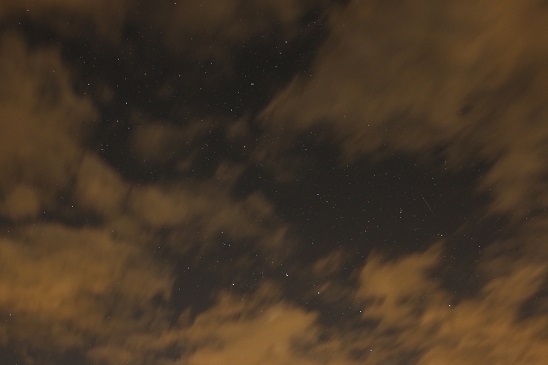 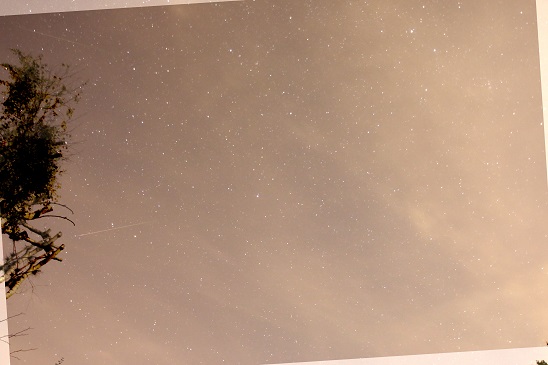 If the above results have inspired you to try out imaging for one of the meteor showers this autumn, have a look through these useful guides to  DSLR imaging  and  video imaging. 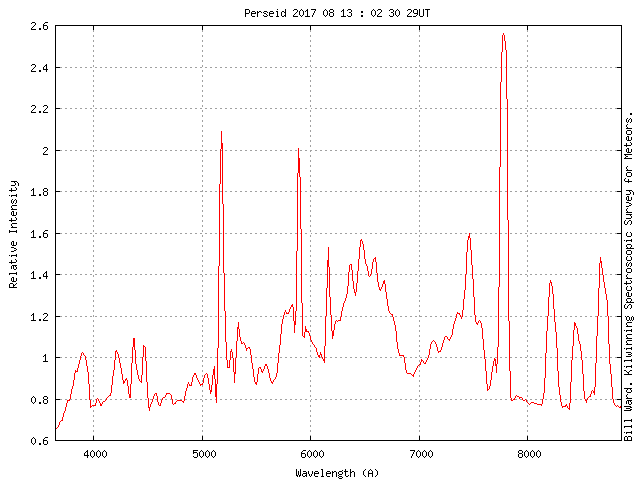 Bill Ward (Kilwinning) captured several spectra during the night of Aug 12-13, but he picks out this one as his favourite.

The intensity plot is shown to the right, with the colourised spectrum being shown below.

As is routinely the case for the Perseids (and many other meteor showers), the most prominent emission lines are those from Magnesium (green), Sodium (yellow) and Oxygen (near infrared).

The first two are related to the composition of the meteoroid itself, while the oxygen line is probably mostly related to atoms it is colliding with in the upper atmosphere. Other emission lines in the red and near infrared are related to atmospheric nitrogen. 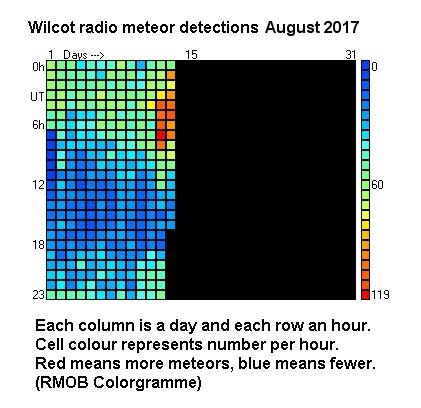 Richard Fleet has published this graph showing his radio results up to mid August, based on forward reflections from the GRAVES system in southern France.

As always in these colorgramme plots, each square represents the count of meteor reflections in one hour and each vertical column represents one day.

As always, the number of count goes up and down over the course of each day due to the changing position of the Perseid radiant relative to the horizon and the direction of the GRAVES transmitter.

As can be clearly seen, the number of reflections was considerably higher during the mornings of Aug 12 and Aug 13.

This method does not distinguish between Perseids and other meteors, but it is reasonable to assume that the increased activity related to the Perseids.