Observing conditions were going to be very unfavourable for the 2016 Geminids:

– the night of maximum (Dec 13-14) coincided with a bright Full Moon in nearby Taurus.

– there was widespread cloud across most of the UK durng thee second and third weeks of December.

Two visual reports have been received.

The first, at 04:49 UT and estimated to be magnitude -8, fragmenting as it passed through the Ursa Minor-Draco area. Tom described its colours as “blue-green-yellow” and commented that it reminded him of burning magnesium ribbon in the school chemistry lab.

The second, at 05:44 UT, was estimated to be of magnitude -6. It was also described as “blue-green-yellow” and passed through the Draco-Lyra area.

The presence of a bright Moon is less of a deterrent on video observers. Although video cameras do nevertheless record less meteors when the sky background is moonlit, their “alertness” and “enthusiasm” is not diminished by the potentially long gaps between meteors. In addition, they are able to observe the part of the sky that includes the Moon – something that would not be feasible for visual observers.

The cameras can also be left to run during overcast spells in case the clouds happen the break of thin. If the skies do improve in this way, they will catch meteors during short improvements that would often not be utilised by visual observers.

Indeed, this did happen during the night of Dec 13-14. Skies over England were forecast to be overcast all night, but several members of the NEMETODE video camera group ( http://nemetode.org/index.html ) did manage to record some Geminid meteors. 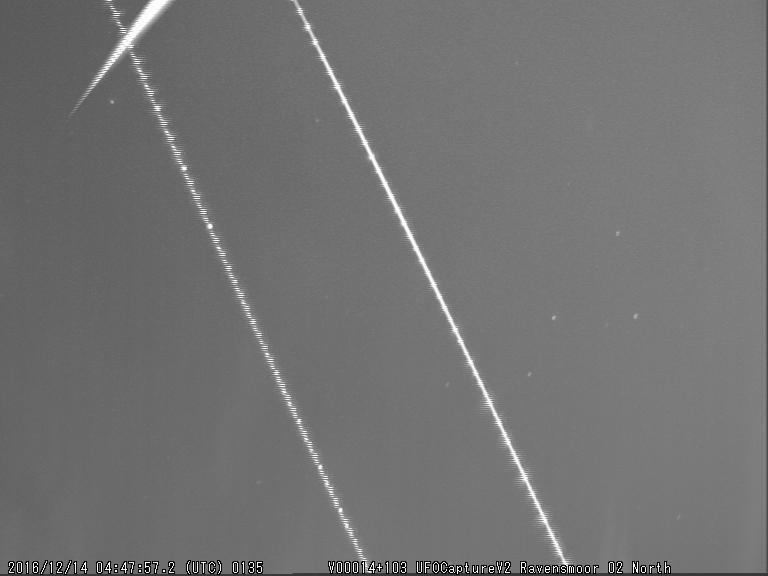 Alex Pratt (Leeds) reports that his cameras detected improving skies after 1am, with his Leeds_SE camera recording 28 meteors between 04:00 and 05:00 UT.

William Stewart (Ravensmoor, Cheshire) also detected improving skies and imaged a number of meteors, capturing a spectrum of one at 04:49 UT – unfortunately this was not one of the meteors imaged by Alex, but does presumably match the Geminid fireball seen visually at this time by Tom Banks. William initially believed that he hadn’t imaged the fireball itself, but closer inspection of the video clips saved that night by the UFO Capture software that monitors the video camera images, revealed the start of the fireball to be present on his north facing camera near the end of a video clip triggered by the passage of an aircraft through the camera’s field of view.

William’s record of the start of the fireball can be seen at the top left of the accompanying image. The ‘W’ of Cassiopeia can be seen towards the bottom left of the image.

The start of this fireball was also imaged by Jeremy Shears (Bunbury), You can see his image here https://britastro.org/node/8574 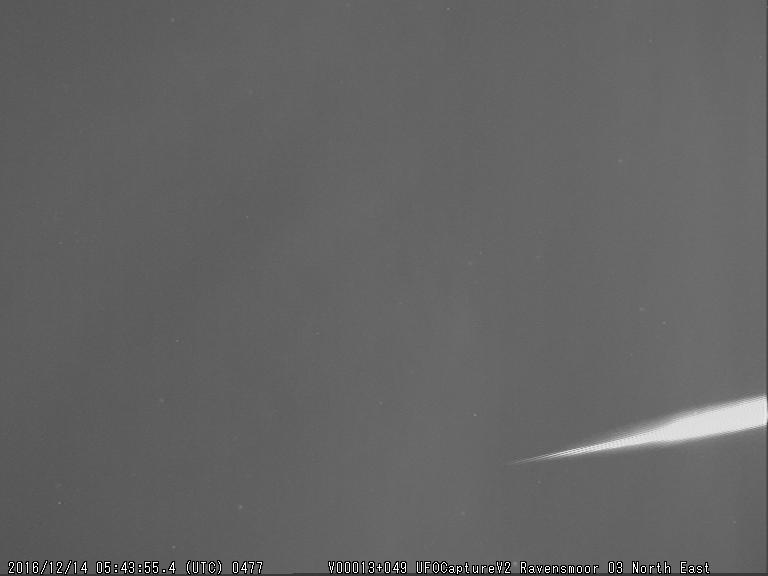 William also captured this image (this time via his NE facing camera) and a partial spectrum for the 05:44 UT Geminid fireball that was seen visually by Tom Banks, tying down its time of appearance more precisely to 05:43:55 UT. Once again, his image captured just the start of the fireball.

William has also determined that, assuming that it was indeed a Geminid, the fireball’s ground track would have been in East Yorkshire, travelling roughly west to east over the Yorkshire Wolds.

With UK skies largely overcast (and moonlight hiding many meteors), radio observations would be particularly significant in following Geminid activity levels in 2016.

However, just before the peak, Bill Ward tweeted some frustrating news … 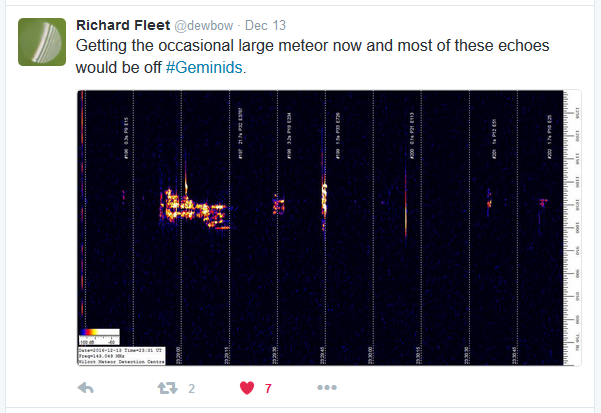 Richard Fleet‘s system was working however and he tweeted some early results, detecting echoes from the GRAVES radar system in southern France..

In the diagram to the right, time progresses from left to right and frequency is plotted vertically.

As Richard notes, it is not possible to establish whether individual echoes are from Geminids or from sporadic meteors. However, given that most meteors appearing visually during the night of maximum would be likely to be Geminids, it is reasonable to assume that most echoes detected would also be from Geminids.

In addition to detecting the “shapes” of individual echoes, Richard’s system was also able to count the numbers of echoes arriving. 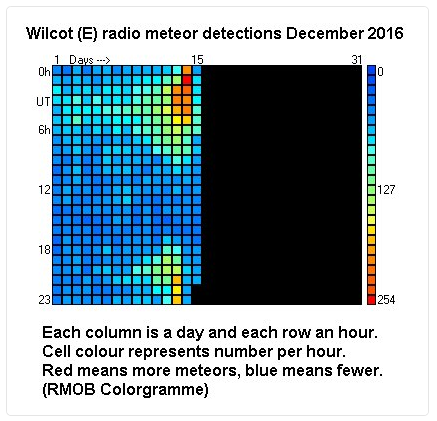 His results through the Geminid period are shown in this Colorgramme plot, with yellow and red showing high counts and blue squares showing lower counts. Each square represents 1 hour of data.

As with visual observations, the number of meteors recorded shows a 24-hour variation. This is mostly due to the changing altitude of the Geminid radiant above the horizon and to its direction in the sky relative to the direction to the GRAVES transmitter.

However, if you look at the counts at a particular hour of the night, the Geminid peak during Dec 13-14 can be clearly seen. By Dec 15, rates had dropped back significantly. This is quite normal for the Geminids, with rates steadily rising towards maximum, but then dropping off sharply post-maximum.