Brian was able to observe on three nights.

Alan observed on Aug 12-13 but due to significant cloud interferencewas only able to see 3 meteors between 2300 and 2330UT. However, he did note a mag -4 Perseid at 23:20UT, which left a persistent train. This presumably ties in with the Perseid fireball for which a number of visual reports and images were included in the earlier Perseid reports. Alan also monitored the Perseids at radio wavelengths (see later) 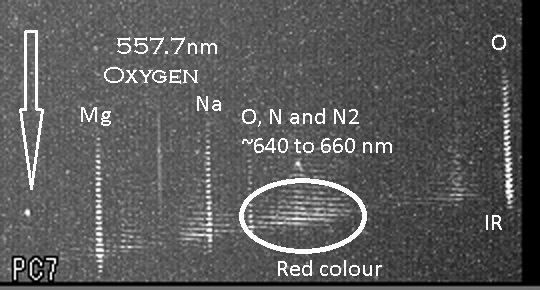 Bill Ward has supplied the accompanying image which helps explain appearance of the green colour at the start of Perseid images captured by DSLR cameras.

The Perseid involved was moving downwards in the image. Hence the image shows how the strengths of each line varies over time (i.e. as the meteor was descending lower into the atmosphere). The oxygen line at the far right should be ignored as it lies in the near infrared rather than in the visible.

Note that the first line to appear is the (green) 557.7nm oxygen line. Hence the iminital part of the meteor appears green in DSLR images. This emission line can only be produced above 110km altitude.

Finally, if the particle is sufficiently “large”, it can survive down to an altitude at which abroad band of emission is produced in the red part of the spectrum by oxygen and nitrogen. This causes the end of the DSLR meteor image to appear reddish.

Be aware, however, that these colour changes will not usually be apparent to visual observers. This is because our eyes can only detect colours above a certain intensity level. The initial green colour will not usually be intense enough and so we will see the start of the meteor as white. When we do see green meteors, it is usually due to the later Magnesium emission line being intense enough to “outshine” the other emission lines. 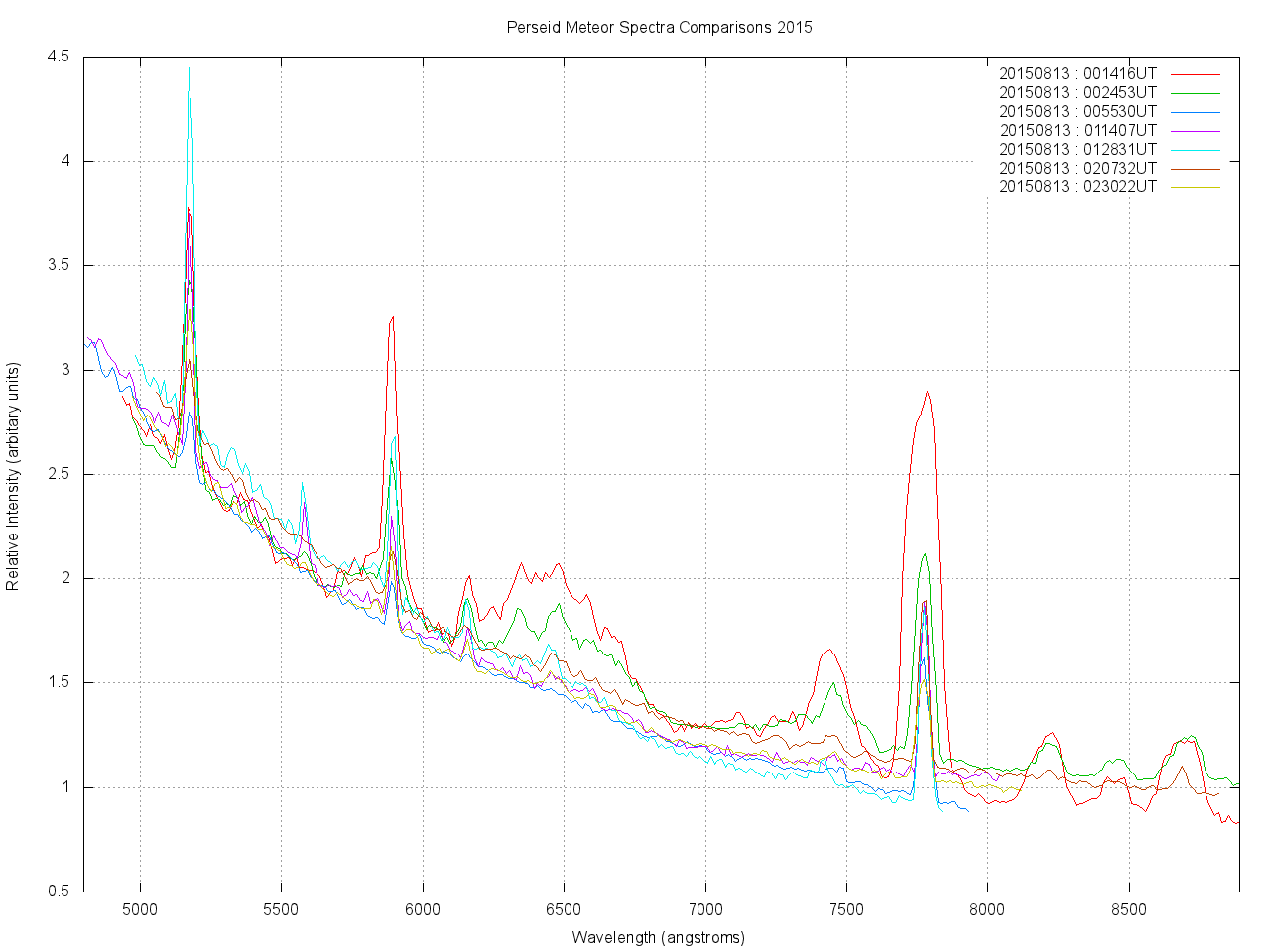 Bill has also supplied the accompany intensity plot which compares the spectra of seven Perseids captured on the night of Perseid maximum.

As can be seen, the spectra are all rather similar, indicating that the compositions of each of the particles that produce these Perseid meteors was fairly similar.

As in the previous image, the prominent emission lines to the left are due to Magnesium (green) and Sodium (yellow-orange).

The broad emission ban near the centre is due to oxygen and nitrogen, and the line in the near infrared is also due to oxygen.

It is not possible, of course, to determine from this plot alone the extent to which these latter lines were related to oxygen and nitrogen within the meteoric particle rather than just being related to the particles that it collided with in the Earth’s atmosphere.

Robert Colclough (Packmoor, Staffs) has supplied the following images of Perseids passing through the Cassiopeia region during the night of Aug 12-13. The top left image is from 23:21UT and so is a further image of the mag -4 fireball described in earlier reports. The top right one is from 01:33UT. 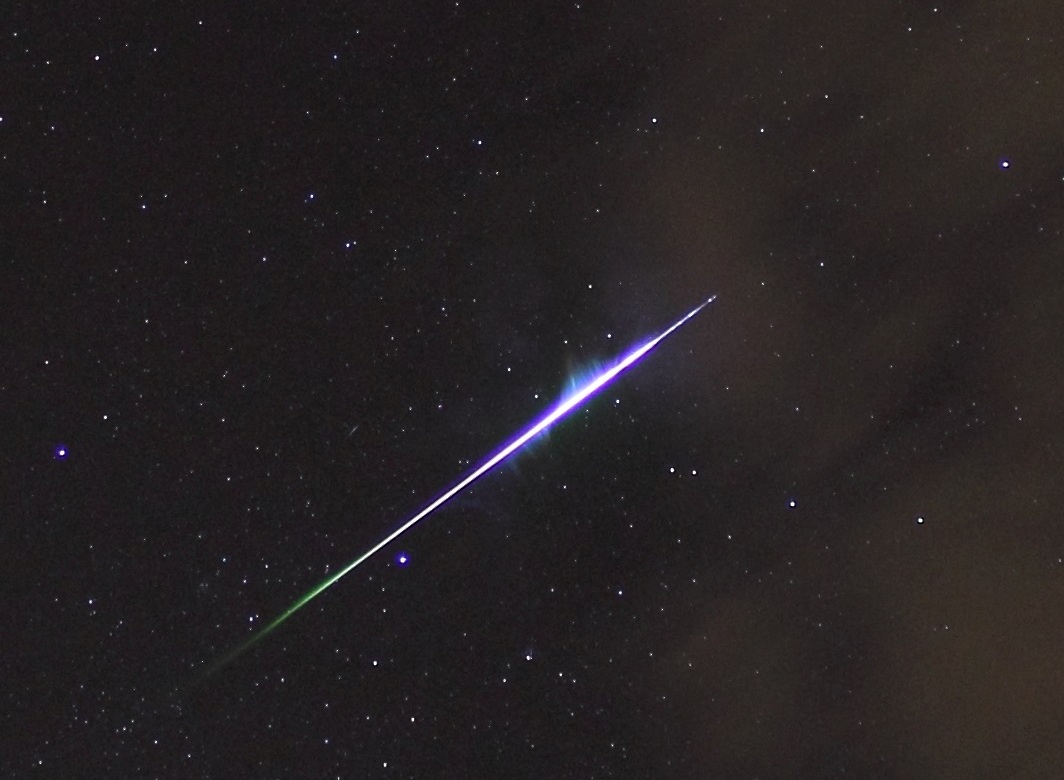 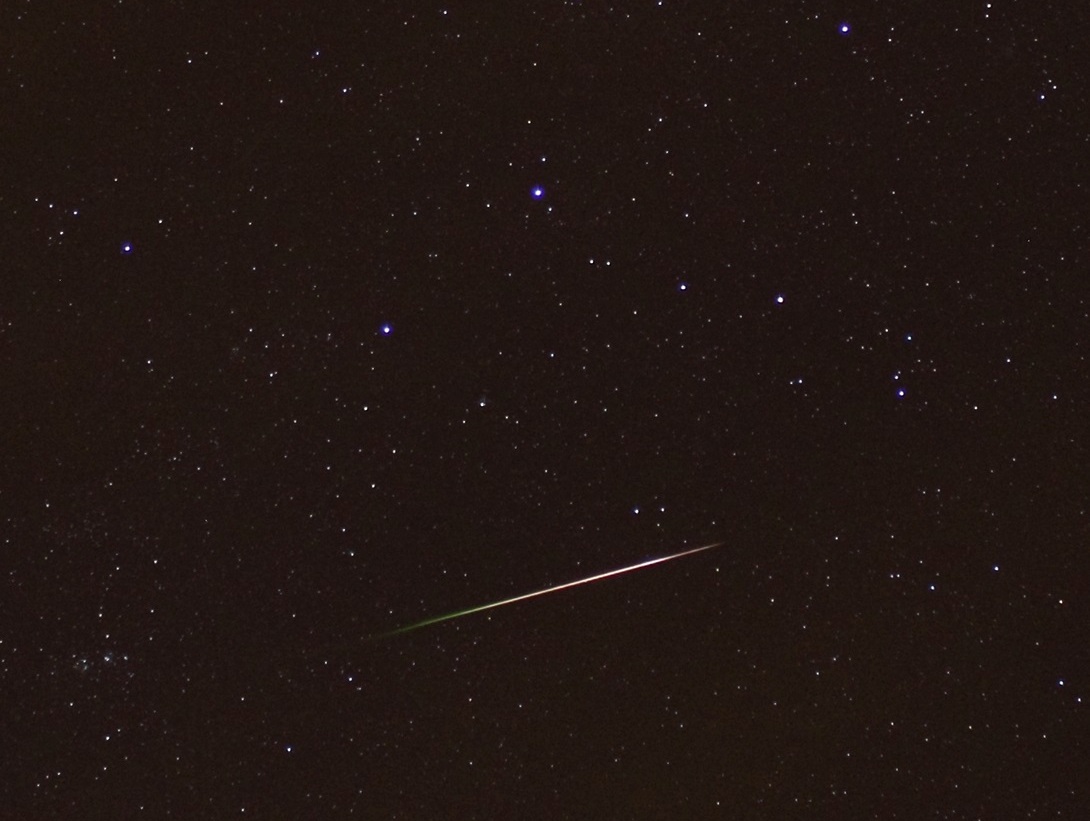 The Perseids were also monitored by Bill Ward 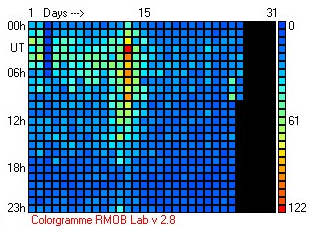 , Peter Hill and Alan Heath at radio wavelengths. Bill and Peter monitored for reflections from the GRAVES radar system, while Alan monitored for ‘whistles’ at 14.30 MHz in the amateur radio band. Amateur radio monitoring cannot distinguish between Perseids and non-Perseids, but the relative day to day counts give an indication as to the changing activity levels.

Bill’s colorgramme plot for August is reproduced here, with red representing the highest number of counts and blue the lowest. Each vertical line represents 1 day and each square shows the counts during an hour.

As can be seen, the counts were highest on August 13th, as would be expected given that Perseid maximum occurred on that date. Bill reports that the peak observed rate was 121 per hours between 03:00 and 04:00UT. Rates were also higher in the first half of the month than in the second half, once again fitting in with the changing levels of Perseid activity.