For once, much of the UK enjoyed clear skies on the nights around Lyrid maximum (the peak itself was predicted for approx Apr 23d 00h UT)

Tony Markham (Leek) observed visually from Leek between 23:37 UT and 00:37 UT and recorded 5 Lyrids and 4 sporadics, with the brightest being a mag -1 Lyrid at 00:12 UT (but see note below). This had a long path, starting in Cygnus and travelling almost all of the way to the star Capella. 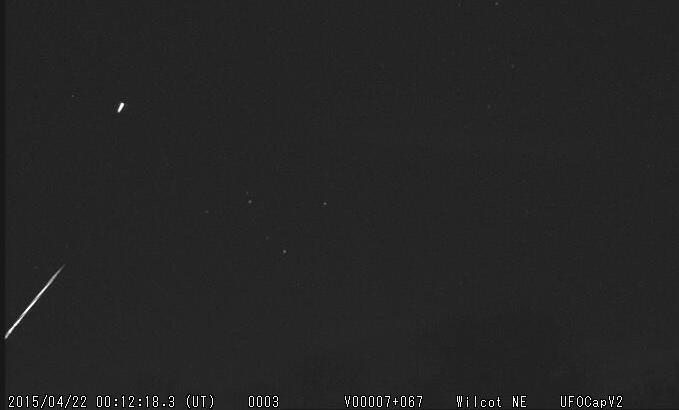 Richard Fleet (Wilcot, Hants) operated video cameras throughout the night as part of the UKMON network ( http://www.ukmeteornetwork.co.uk/ ) and recorded many meteors, many of which were Lyrids.

One of his images (reproduced to the right), was timed at 00:12:18 UT and shows a bright meteor low in the northern sky. This may well be the same meteor as seen from Leek.

The “Leek” meteor also appears to have been imaged by six of the cameras of the NEMETODE network( http://nemetode.org ), with a particular stunning image (below left) being captured by Alex Pratt from Leeds.

William Stewart has used Alex’s image along with those captured by other NEMETODE cameras to determine that the ground track of the meteor’s trajectory  was over northern Lancashire and this is reproduced below right: 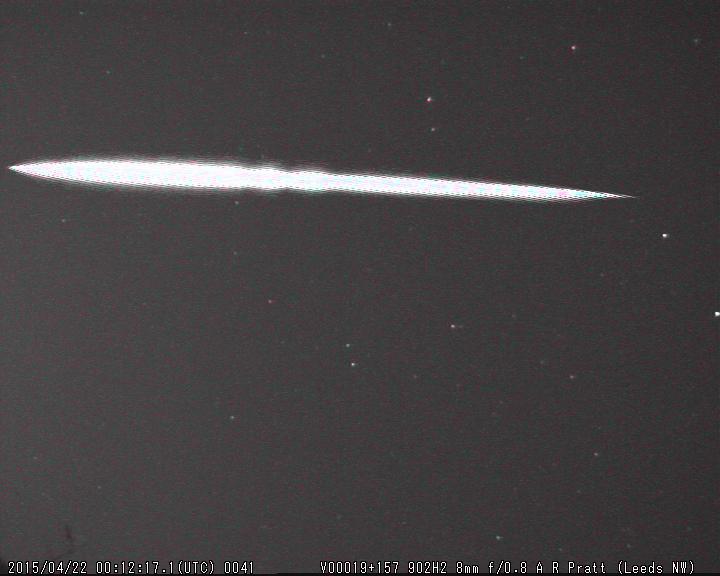 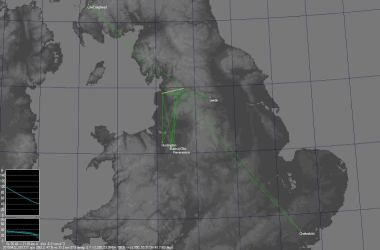 The analysis also confirms that the meteor was a sporadic rather than a Lyrid. The meteor’s radiant was in the same general area of sky as Lyra, but the meteor’s speed was out of step with what would be expected for a Lyrid. Hence the meteor’s apparent lining up with the Lyrid radiant, as seen from Leek, was pure chance.

It did seem possible at first that the meteor may also have been imaged by Robin Scagell from near London. 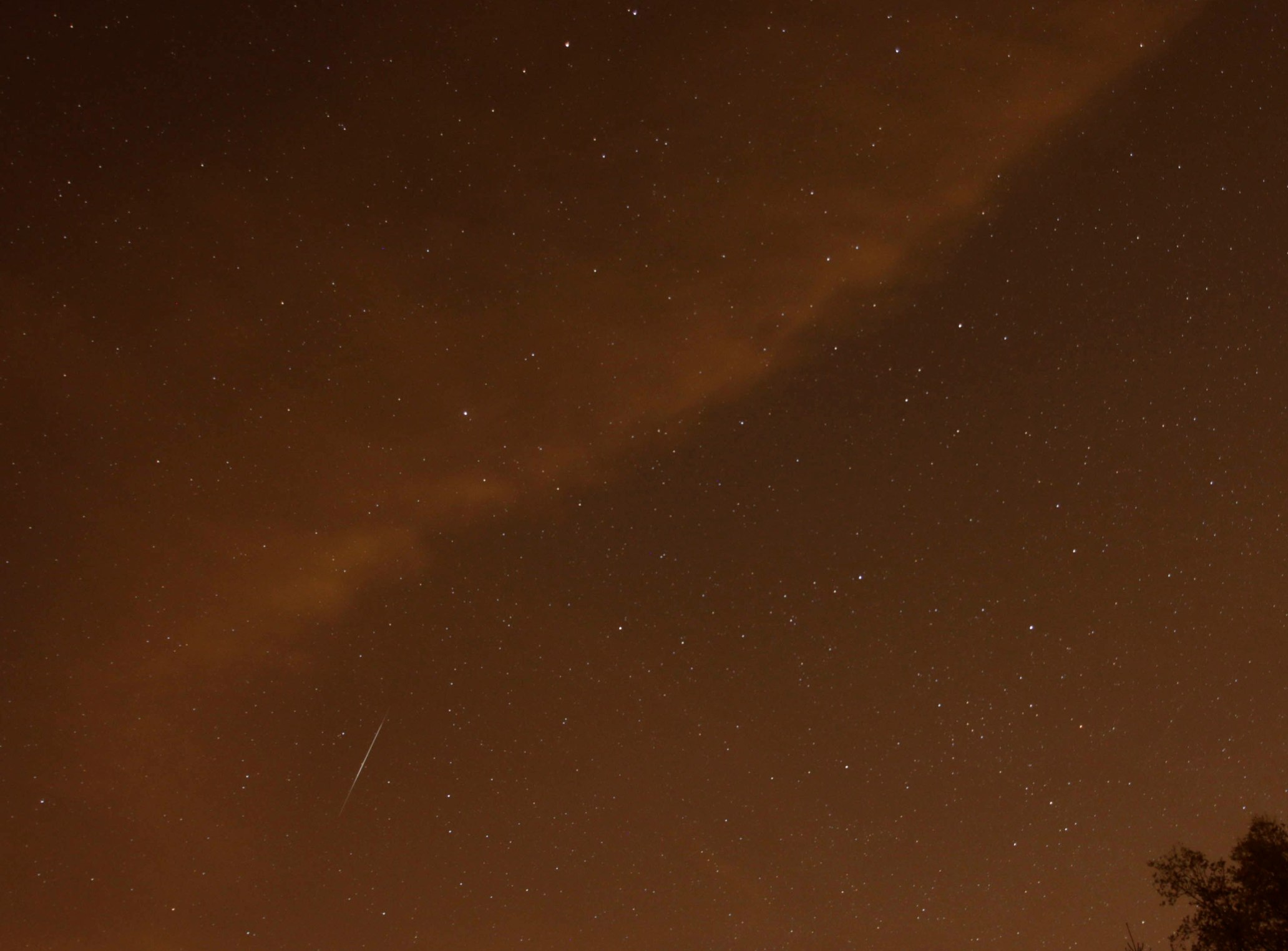 His colour image, reproduced here, was timed at 00:11 UT and shows a meteor in the northern sky. Ursa Minor is at the top of the image. Robin comments that his initial reaction was that his image might show an Iridium flare, but having checked the Heavens Above website, has confirmed that none were due to appear around that time in that part of the sky (another “meteor” imaged by Robin at 00:26 UT has been shown to be a satelllite).

However, Robin has now confirmed that the exposure started at 00:11:29 UT and ended at 00:11:54 UT and so doesn’t include the time of the meteor’s apperance.

The time at which the meteor appeared would have fallen within the time period of Robin’s next exposure. However, that image does not show it and it is likely that the meteor was just outside the camera’s field of view.

Fortunately it appears that the advance of cloud across the UK during this night was not as extensive as weather forecasts had been predicting.

Tony Markham (Leek) observed visually between 21:59 UT and 00:09 UT, recording 10 Lyrids and 5 sporadics (LM 5.2-5.3). The brightest was a mag -3, seen at 23:02 UT as a bright flash in Cygnus (low in the northern sky) at the edge of his field of view. It left a persistant train that took 8 seconds to fade away. The orientation of the train helped establish that the meteor was a Lyrid.

It appears that this bright meteor was also imaged by at least two other observers. 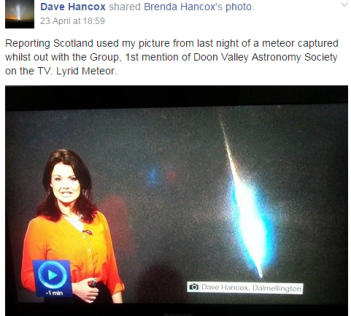 David Anderson reports that the meteor was probably just outside the field of view of one of his cameras but notes that it was imaged by Dave Hancox, with a timestamp of 23:02:52 UT. Dave reports, via Facebook, that this image was later used by Reporting Scotland in a news report (see image to the right).

The meteor probably also ties in with an image captured by Derek Moffat (North Ayrshire) and posted on Facebook.

There is also a Twitter post from Mark Richards (Northumberland), with an image reported to have been captured at 00:04 BST (23:04 UT) showing a meteor in NE Ophiuchus.

Alex Pratt (Leeds) reports that he appears to have imaged the start of Tony’s first meteor and all of the second meteor. His images are reproduced below (the brightest star in each image is Arcturus): 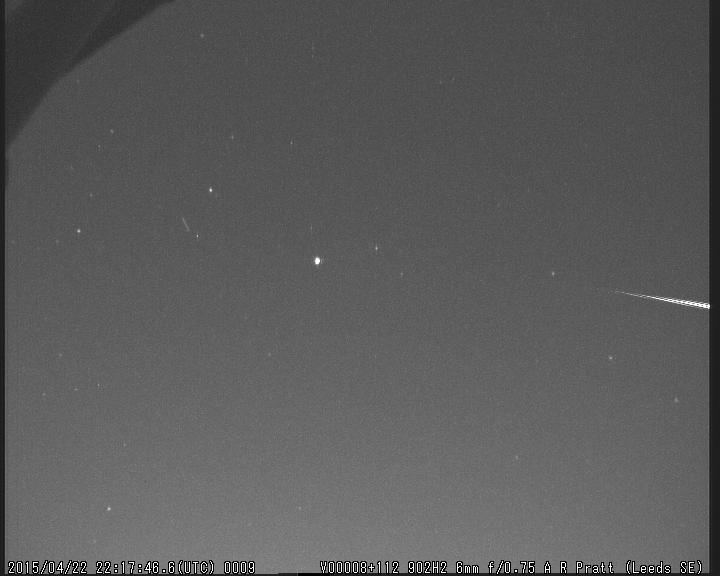 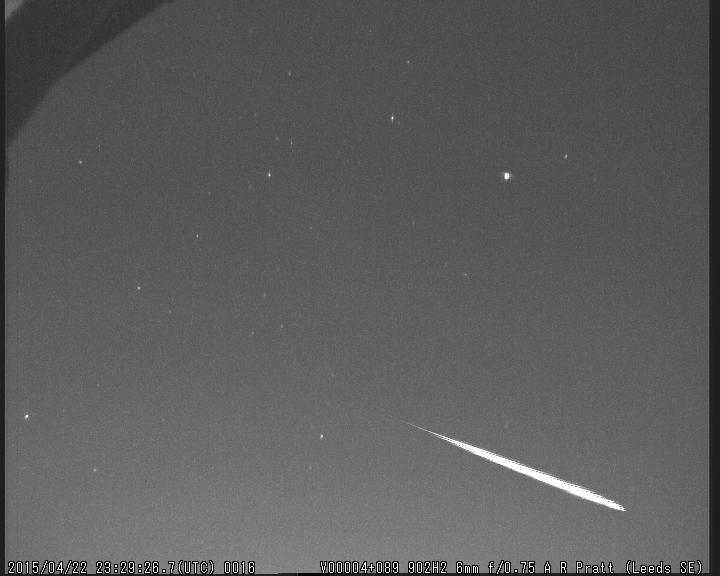 Meanwhile, Bill Ward reports capturing the spectrum (reproduced below) of a bright sporadic meteor at 00:55:21 UT and is currently looking into whether it was also imaged from elsewhere. If so, it should be possible to determine its former solar system orbit and see how this ties in with the meteor composition implied by the spectrum. 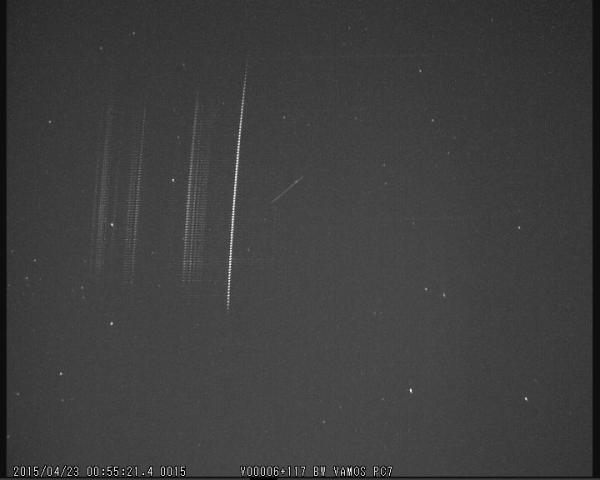 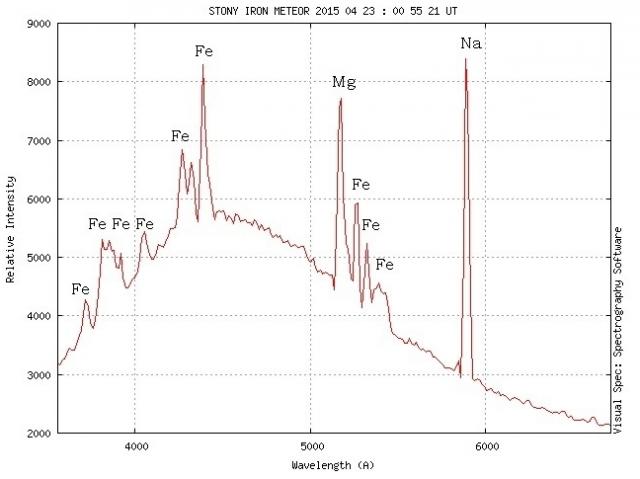 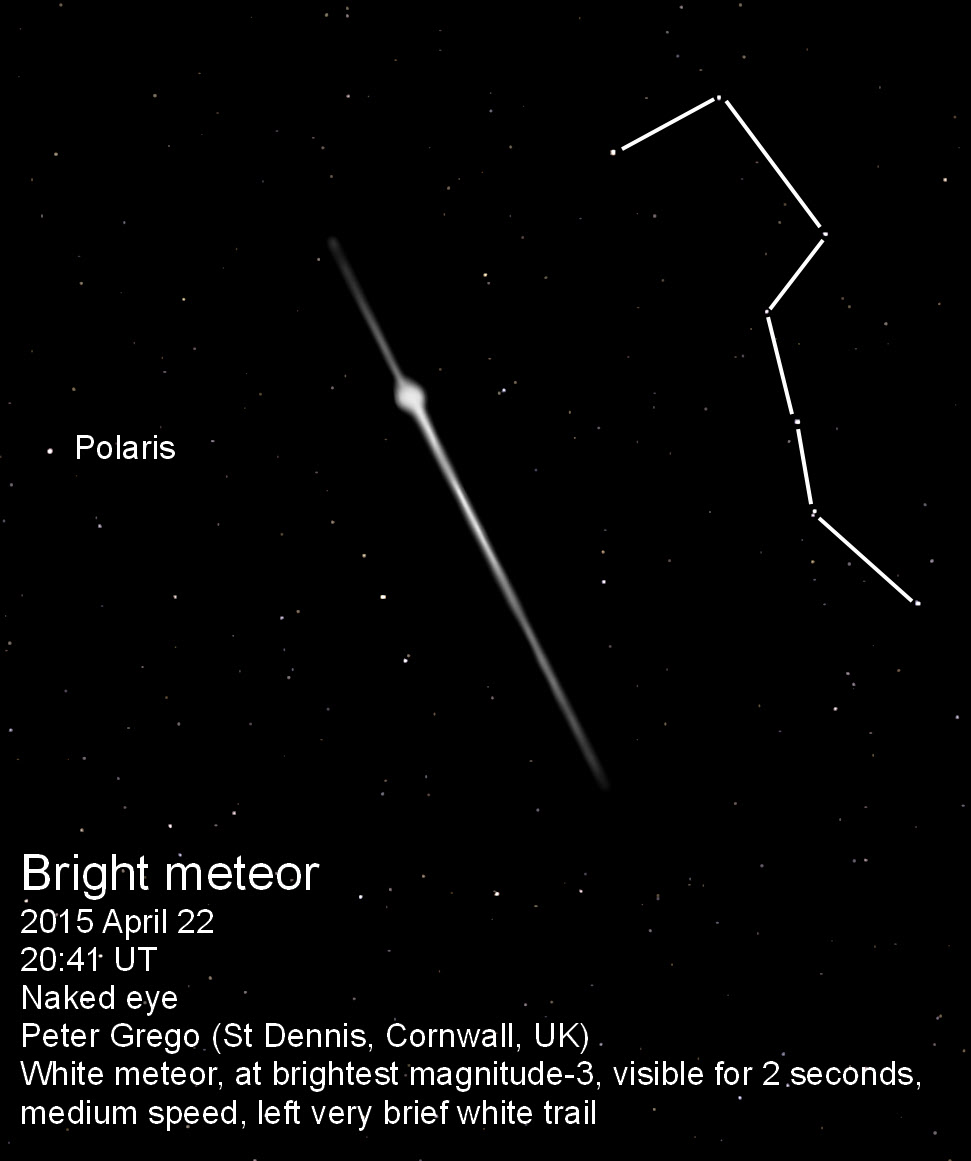 A video of the event showing the spectrum moving with the meteor, can be found at spectrum video .

Bill particularly likes the spectrum because the lines are well dispersed. This makes it easier to identify the individual emission lines that are present.

As can be seen, although the emission lines from magnesium (green) and sodium (yellow) seen in Bill’s earlier spectra are once again present, there are now also a number of prominent lines due to iron.

Bill also operated his video camera again, this time recording 17 Lyrids and 9 other meteors between 21:30 and 03:30 UT.

Peter Grego (St Dennis, Cornwall) has supplied this sketch that he made of a bright meteor that appeared at 20:41 UT on April 22.

The direction of the meteor shows it to have been a sporadic.

Richard Fleet (Wilcot, Hants) once again operated his video cameras and captured images of many Lyrid meteors and of several sporadics.

Four of Richard’s images are reproduced below.

The first and fourth images show Lyrids ; the other two were sporadic meteors. 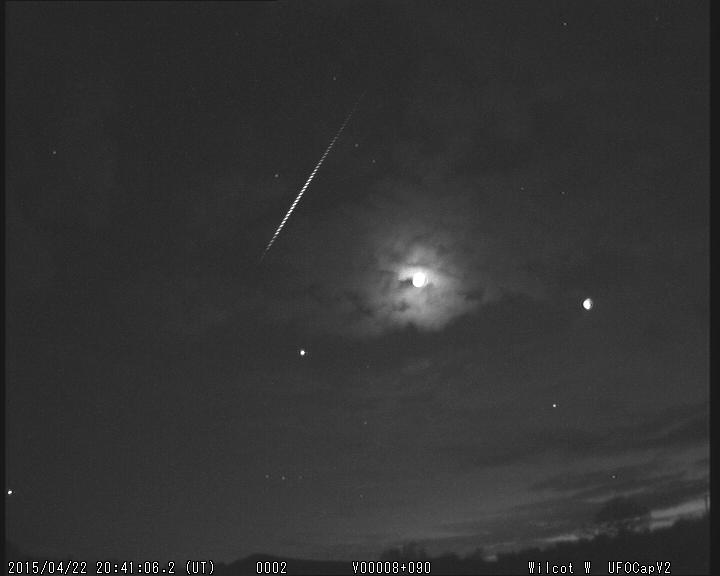 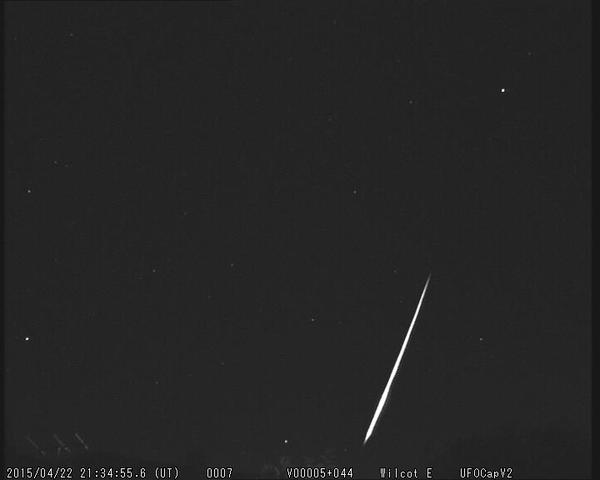 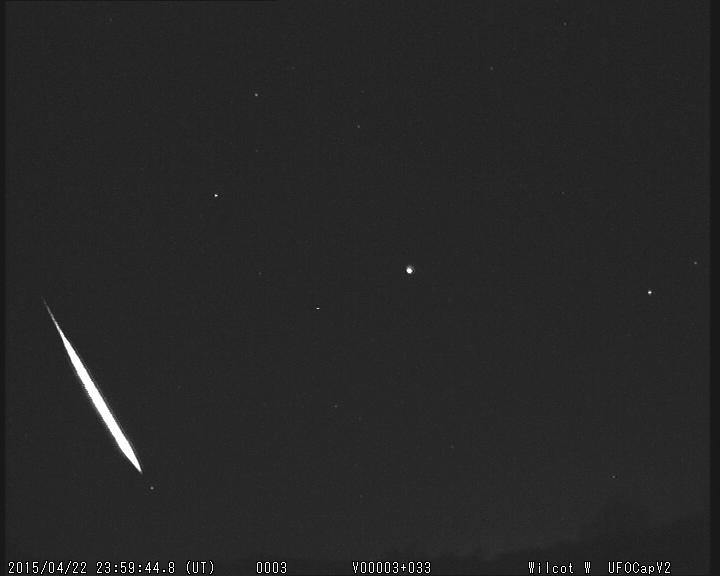 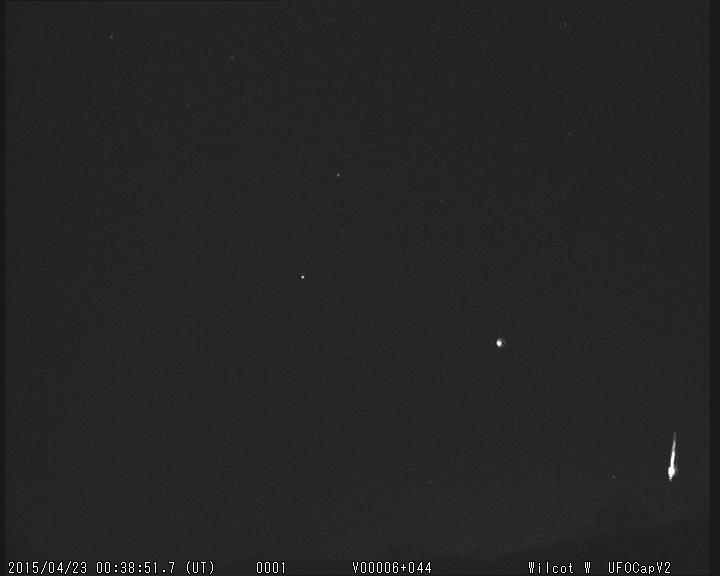