The Geminid peak was predicted to occur during the afternoon of Dec 14th. However, with the peak being broad, it was likely from the longitude of the UK, that rates would be good during the nights of both Dec 13-14 and Dec 14-15 … if the skies were clear.

Unfortunately, the weather for the 2015 Geminids was very unfavourable for UK based visual observers and imagers.

Some observers did have some success, however.

Only one UK visual meteor watch report has been received so far. This was from Alastair McBeath (Morpeth) who observed on the night of Dec 12-13 between 23:31 and 00:07 UT, seeing 4 Geminids and 7 sporadics (Limiting Magnitude 5.6).

Bill Ward, however, abandoned his usually cloudy west of Scotland skies and travelled to Tenerife to observe the Geminids. In his post to the SPA forum, he reports that the displays on Dec 12/13, 13/14 and briefly on the 14/15 were brilliant.  Overall, he thought the rates were not as good as 2012 but he reports that he was “seeing ~25-30 per hour for several hours through the wee hours”. 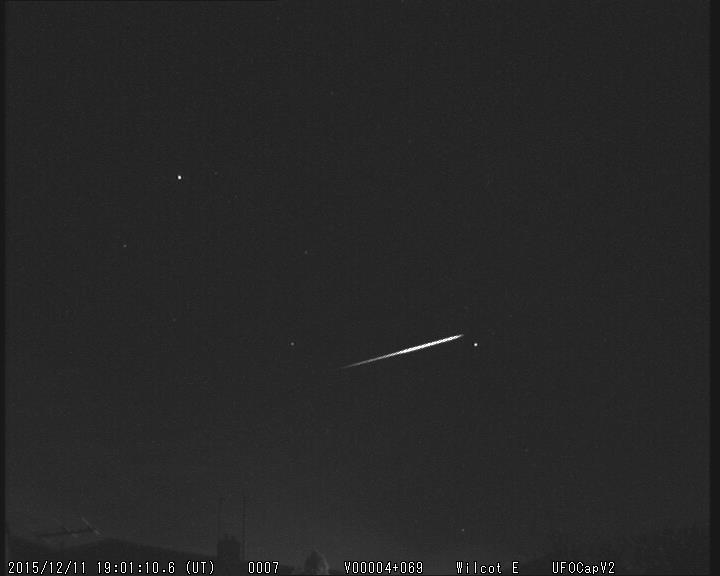 Dec 13-14 was rather overcast over almost all of the UK. There were a few scattered, mostly short-lived, gaps but the chances of visual observers happening to catch one of these were very low. Automated imaging systems are better equipped to catch these and inspection of the image archive of the Univ of Herts all-sky camera at Bayfordbury did indeed reveal a number of semi-clear spells and two possible images of bright sporadic meteors through cloud in the western sky (right of the image) at  21:55 GMT and at  23:55 GMT . In contrast, despite being located not that far distant, the Hemel all-sky camera was almost completely clouded out.

Dec 14-15 seems to have been almost completely overcast however.

Earlier in the display, Richard Fleet captured this image of a Geminid passing through Taurus at 19:01 GMT on Dec 11via his east facing camera.

Bill Ward reports capturing a good number of meteor images from Tenerife, although he notes that the capture rates didn’t seem to be as good as in 2012. 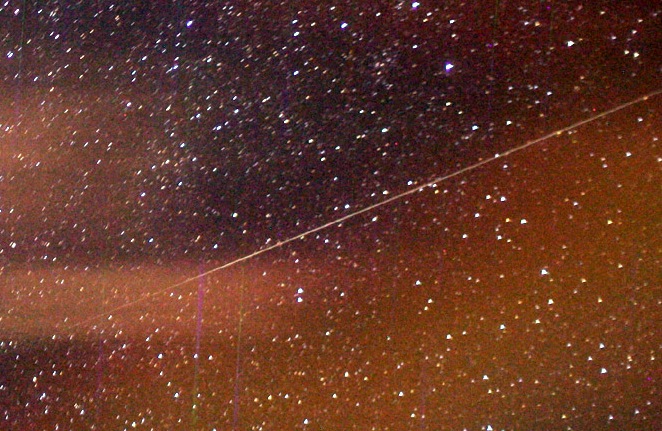 The accompanying (slightly enhanced) colour image shows the brightest Geminid that Bill imaged. The meteor was imaged through patchy cloud, but was probably magnitude -2 or magnitude -3, and so just short of the threshold required for it to be classed as a fireball. 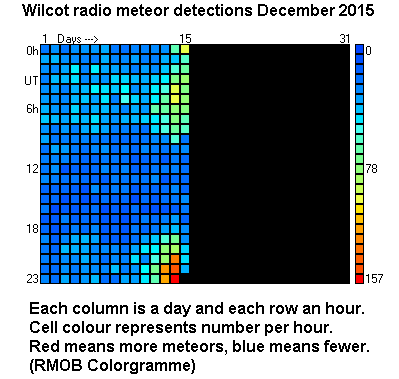 Cloud does not hinder radio observations and Richard Fleet(Wilcot, Hants) monitored meteor activity throughout the Geminid period. His activity plot for the first half of December is shown here.

Note that these observations do not differentiate between Geminid and other meteors. However, the timing of the most intense levels of activity to coincide with when the Geminid radiant is high in the sky very much fits in with the extra activity being Geminid rated.

More radio plots from other UK based observers, including Bill Ward and Peter Hill can be seen  here .

Monitoring of radio meteor activity from the UK nowadays makes use of “forward scatter” from the GRAVES radar transmitter near Dijon in France. For a long time, it was believed that the beams from this system only faced in a southerly direction and so any meteors detected would be over southern France. More recent studies have indicated however that part of the output seems to be directed in a more northerly direction and this means that some of the meteors detected could be over the English Channel or over northern France. This opens up the possibility that imagers using DSLR cameras or video cameras might be able to image meteors that tie in with the stronger radio reflections … or at least they could if the skies weren’t overcast!

Richard Fleet flagged one such candidate at 21:37 GMT 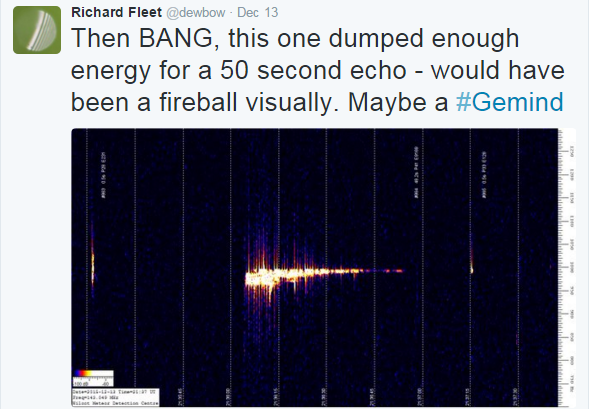 via his Twitter feed on the evening of Dec 13th.

More of Richard’s posts about Geminid activity at radio wavelengths can be see via Richard’s Twitter feed  .

Due to the poor UK weather largely hiding this year’s Geminids, we have to look further afield to see what observers in other countries reported.

One source of information is the meteorobsforum. You can see posts to this forum here

As you will see, many observers in the US had clearer skies than we had in the UK. With the US observers bein located 5 hours or more further west, they reported lower rates during the night of Dec 14-15 than they did the previous night. This fits in with the normal pattern in which the fall off in Geminid ZHRs post maximum is faster than the rise to maximum. Despite the lower rates during Dec 14-15, they did report higher percentages of bright meteors. Once again, this fits in with previous understanding in which the particles in the Geminid meteor stream have been “mass sorted” and the smaller fainter Geminids reach their peak level many hours before the larger bright Geminids. 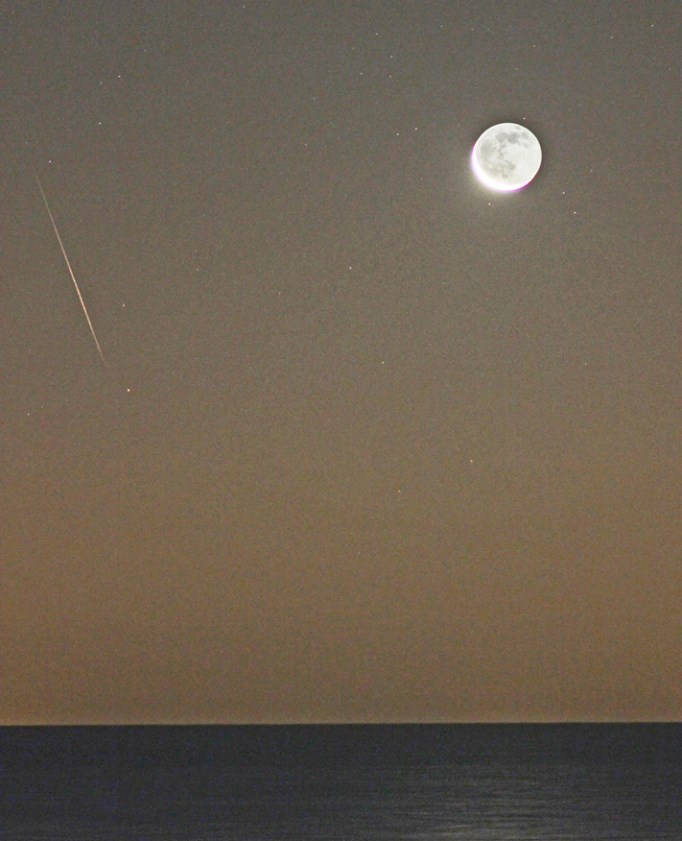 Its not only about the Geminids!

There were also quite a few interesting non-Geminid meteors imaged during the Geminid activity period.

Alex Pratt (Leeds) captured an image of a bright meteor (about mag -0.5) at 02:07:52 GMT on Dec 12th which then produced a bright flash after it had exited the camera’s field of view. William Stewart (Ravensmoor, Cheshire) also captured an image of part of the meteor’s path, again missing out on the “flare”. Triangulation indicated that the meteor’s atmospheric trajectory was just to the south east of the Humber Estuary. The meteor may have been related to the Monocerotid meteor shower.

Bill Ward reports catching a bright fireball (non Geminid) that was sufficiently bright to give him his first “photographic” spectrum (as opposed to a video spectrum) since he first blutacked plastic grating sheet to a lubitel in 1986!!!

Paul Sutherland (accidentally) captured this image of a sporadic meteor while imaging the crescent Moon over the sea on the morning of Dec 9th.

Richard Fleet captured the image shown below of a southern Taurid meteor low in his SE sky at 02:55 GMT on the morning of Dec 5th.

Many more images of meteors captured by members of the UKMON video camera group can be seen in their image archive at http://www.ukmeteorwatch.co.uk/archive