The lighter evenings and shorter nights of late spring and early summer inevitably lead to a reduction in the number of fireballs being seen. This also makes it more likely that a fireball will only be reported by a single observer and hence it is often not possible to confirm whether an object was definitely a fireball or just a local event, such as a sky lantern.

The following reports have been received :

Sam Mundell (Gosport, Hants) reported seeing a mag -3 fireball at 2058UT on April 21, travelling from Ursa Major towards Cassiopeia and lasting for 5 seconds.

Peter Meadow (Great Baddow, Essex) imaged this Lyrid fireball (below) at 01:55 UT on April 22. It has a short path because it is almost head on from the observing site. The second set of images show the decay of its persistent train. 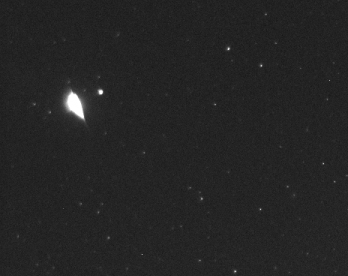 Peter Grego (St Dennis, Cornwall) imaged a fireball at 0229UT on May 13. He described it as “very slow, flaring and fragmenting mid-flight, 20 degrees alt and almost parallel with horizon, appeared in southeast, brightened, visible in flight for seven or eight seconds, brilliant white head with orange-yellow trail about ten degrees long, trail not persistent. Terminated due east. Magnitude -5 at brightest.”

Katie Sludden (Comrie Forest, Perthshire) saw a fireball descending in the ENE at 2257UT on May 15, including the description “It burned with a slight green haze and left a bright white trail in the sky. It lasted up to 3 seconds but I think I only caught the end of it.”

Nick Wright (Roundswell, Devon) saw a fireball of duration 5 seconds, possible of mag -10, at 0130UT on May 26 low in his western sky. His description included “Trail was very clear, straight and white. The explosion at the end of the flight was very bright and instantaneous”

Melanie Dunkley (Ely, Cambs) saw a fireball at 2325UT on June 15, describing it as “Started as what I thought was a shooting star but then the orange tail appeared which was pretty long.  This tail disappeared and the white became brigher and also looked green until it vanished. The entire show lasted probably between five and ten seconds”

Kelli Hicks (Church Crookham, Hants) reported a fireball seen in the northern sky at approx 2115UT on July 22, describing it as having a glowing red tail. The time of this object roughly coincides with a fireball reported on Twitter as heading in a NNE direction by an observer in Felixstowe.

Peter Grego (St Dennis, Cornwall) imaged a fragmenting fireball at 2217UT on July 27, which included flares to mag -4 and mag -6 as it descended steeply towards the SSE horizon. He described it as ”appearing a golden-yellow with a bright white head. No fragmentation noted, nor was there any sign of a persistent trail. It lasted only around two seconds but it was very impressive.”

Four reports were received of a fireball, possibly around mag -7, at 0058UT on July 28. It was imaged by Alex Pratt (see below) in Leeds and by William Stewart from near Nantwich in Cheshire and was seen visually by Colin Cooper in Tynemouth, Tyne & Wear) and by Ian Matthew (Saltash, Cornwall). The end of the fireball is probably present ion an image secured by the Exmoor camera of the University of Hertfordshire. Alex described the sequence of flares near the end of its path as â€œBright Flash – Very Bright Flash – Flash â€“ Flashâ€. An initial analysis by Alex of the two images suggested that the fireball’s radiant was near the head of Draco. 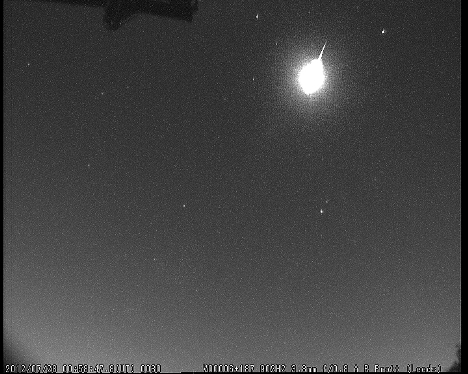 As always, any new reports of these or other fireballs (meteors of magnitude -3 and brighter) would be welcomed by the Section.
Advice regarding what to record and where to report fireball observations to can be found at :  www.popastro.com/meteor/fireballs/makingobservations/index.php